Stew is a seven-week-old, short-haired orange kitten that one week ago was on death’s door.

On Friday, just an hour or so before the Langley Animal Protection Society began plying its volunteers and staff with beverages and hors d’oeuvres as a way to say thanks for all they do – this little gaffer ate his first meal.

It was a major milestone, said a beaming LAPS adoption counsellor, Amy Parker.

After a week of round-the-clock care, Stew turned a corner Friday.

While he’s still very small and weak, and not yet out of the woods completely, Parker – who is also Stew’s foster mom – said she had reason to raise a glass and toast all that the shelter is and provides for animals in need in the Langleys.

“I’m really optimistic about that,” about him, and about his future, she said.

Stew’s mother was a barn cat on a farm in rural Langley. It’s believed she was attacked and killed recently by a coyote.

She had a litter of kittens that would have been six weeks old last Monday. Sadly, all but one of them died of starvation before humans discovered them and intervened.

“There was just this little boy left,” Parker said, noting that “a really kind lady” found him and brought him in to the shelter.

“It was a really good thing she did, because he was on death’s door,” explained Parker, who said he was significantly dehydrated, starving, had pale gums, and was less than a third of the size he should have been.

He was immediately put onto fluids and bottle fed every two hours since being surrendered to LAPS, and Parker is now optimistic he has a future.

And he’s only one of more than 100 kittens that have been brought into care through LAPS this kitten season, although his story was probably a little more heart-wrenching than most, said Kristine Carrick, board chair of LAPS.

She was moved by Stew’s story – but not at all surprised. It’s one of countless “furry tail ending” stories this shelter has become synonyms for through the years, she added.

“He’s pretty important,” Carrick said, “because he signifies what it is that the Langley Animal Protection Society does for the communities of Langley – both through the shelter building behind me and the newest facility, the cat intake and isolation centre. And that is to ensure that no animals in our community are suffering, but it’s also an opportunity for us to share and educate our community why we should take care of cats and dogs and other animals that live in the Langleys.”

While sharing amazing animal stories – like Stew’s – speaks to what LAPS is all about, it does more, Carrick said.

It speaks to the kind of people – both volunteers and staff – who help keep LAPS operating 365 days of a year and who care for and find homes for literally hundreds of dogs and cats.

And it was those people who were the purpose for Friday’s gathering at the Aldergrove shelter.

About a hundred gathered to help express gratitude to those who work behind the scenes at the shelter, and LAPS executive director Jayne Nelson said it best.

“The level of expertise that our staff and volunteers have is amazing, and the team always go above and beyond to help the animals,” she said, pointing out that every staff member is also a volunteer foster mom – not just Parker – taking animals in need into their homes, and usually ones that need extra special care or loving.

“There is no doubt that LAPS has always been so incredibly fortunate to have an incredible staff and volunteer team,” Nelson elaborated. “LAPS wouldn’t be LAPS without the heart, sweat, and tears that this group contributes every day.

“They may not wear capes, but they are truly my heroes,” she said, segueing into the fact that Friday was also the kickoff for ticket sales to this year’s Furry Tails Ending gala. This year’s 11th annual gala was aptly themed Nightfall in Gotham, and paying homage to one masked crusader in particular, Batman.

And in addition to recognizing a number of volunteers for lengthy years of service, Nelson raised a glass and toasted every one of those heroes.

“In Batman’s words: It isn’t who you are underneath, but what you do that defines you,” she said. If you could, Nelson suggested, just ask Stew and all the other animals that have come through the shelter – on their way to loving and forever homes – what their encounters with these uncaped crusaders has done for their lives. 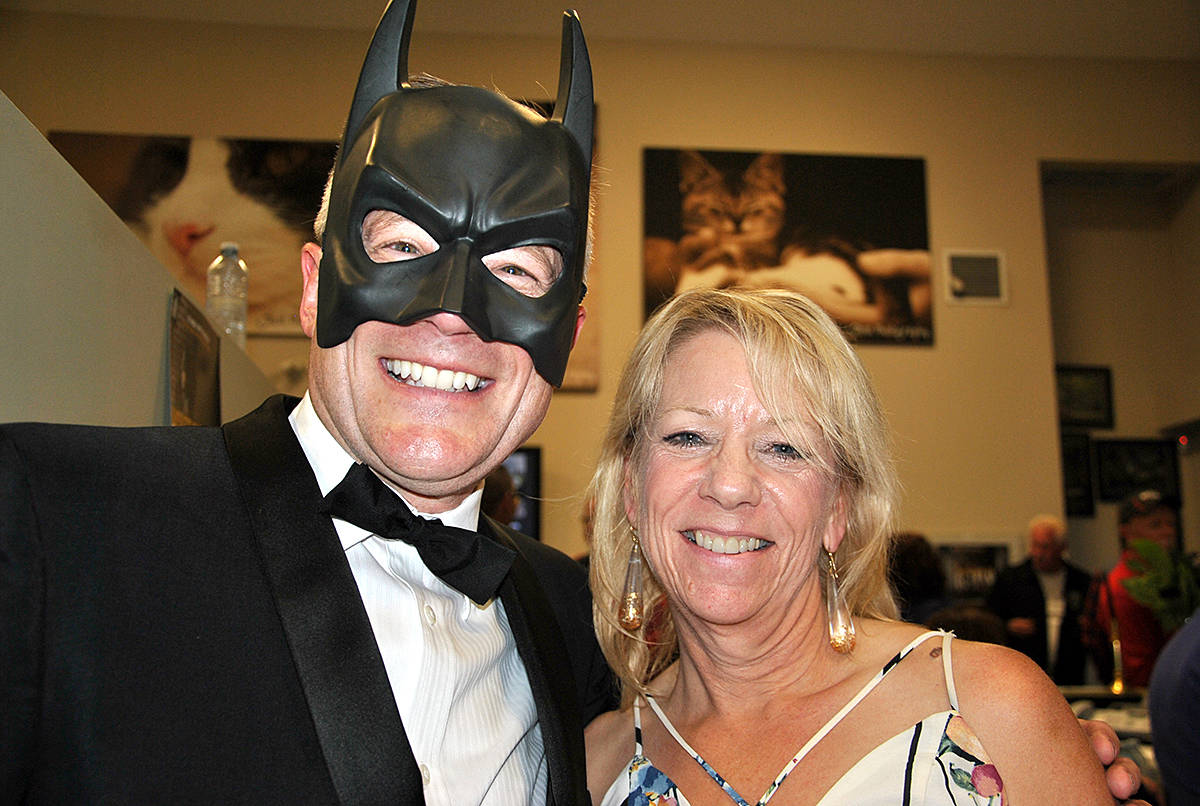 This year’s Langley Animal Protection Society’s big charity fall gala will be about heroes, and have a super hero-type theme of Nightfall in Gotham. Consequently, Batman made an appearance at Friday’s LAPS volunteer appreciation evening, to help kick off tickets sales for the Nov. 3 event. (Roxanne Hooper/Langley Advance) 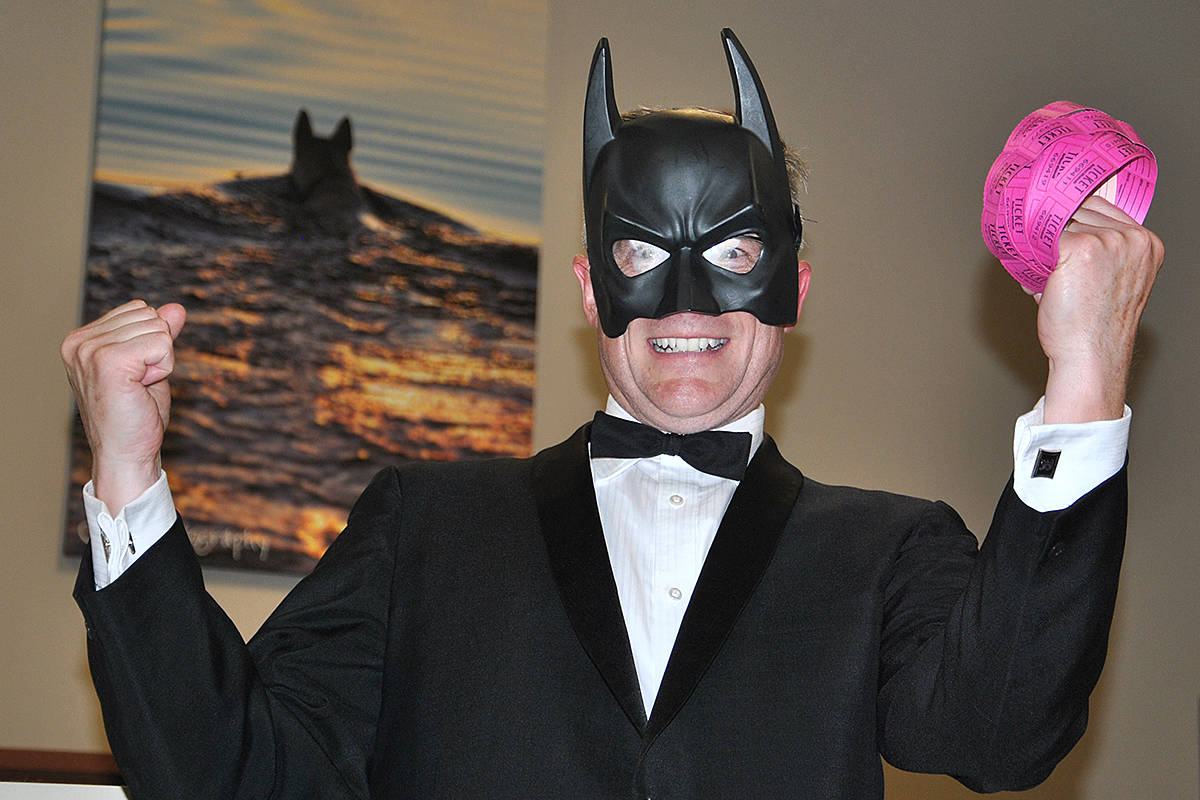 This year’s Langley Animal Protection Society’s big charity fall gala will be about heroes, and have a super hero-type theme of Nightfall in Gotham. Consequently, Batman made an appearance at Friday’s LAPS volunteer appreciation evening, to help kick off tickets sales for the Nov. 3 event. (Roxanne Hooper/Langley Advance)

Enjoy a dip in a frog pond