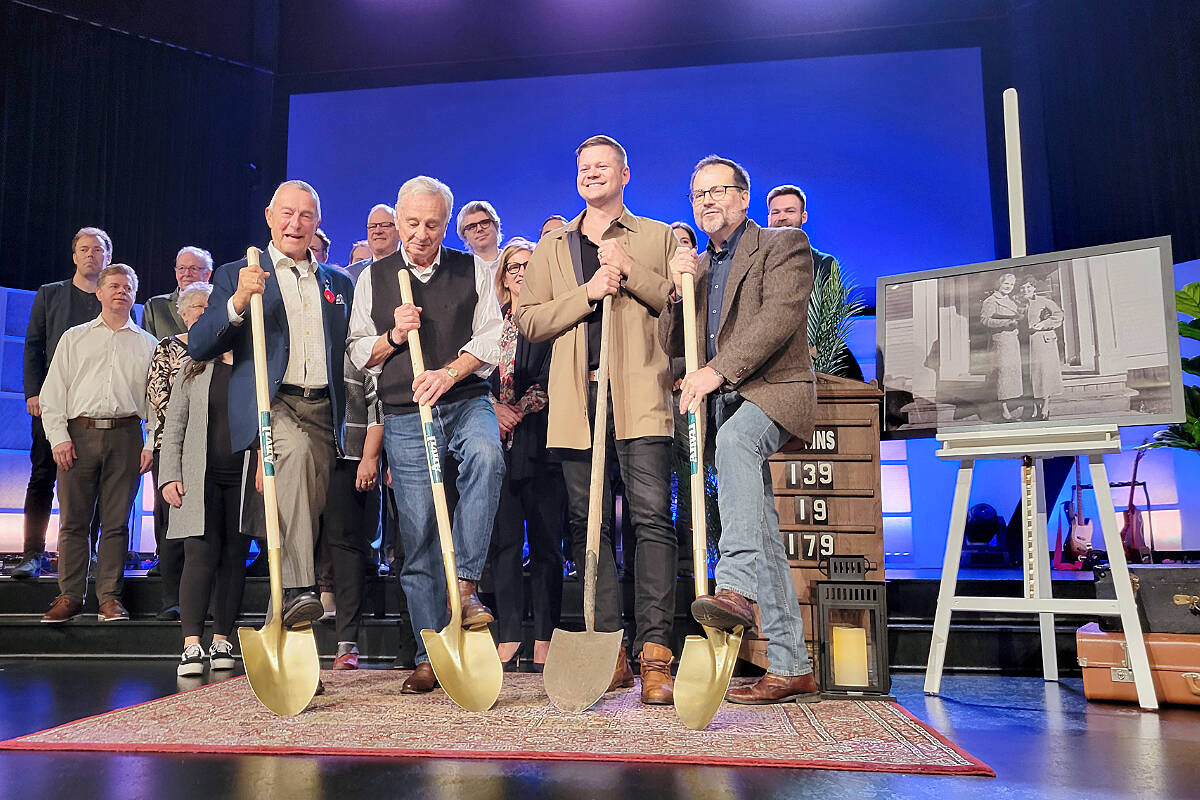 Due to heavy rain and wind, the Oct. 30 dedication ceremony for the Christian Life Assembly’s new housing project was moved indoors at the Langley church. It will be named ‘Jennie Gaglardi Place.’ Front row (left to right) Peter Fassbender, president of the CLA Housing Society, Bob Gaglardi (Jennie’s son), Ian Martens, chair of the church building committee, with a shovel used at a previous sod-turning for the church, and CLA lead pastor Derrick Hamre. (Dan Ferguson/Langley Advance Times) 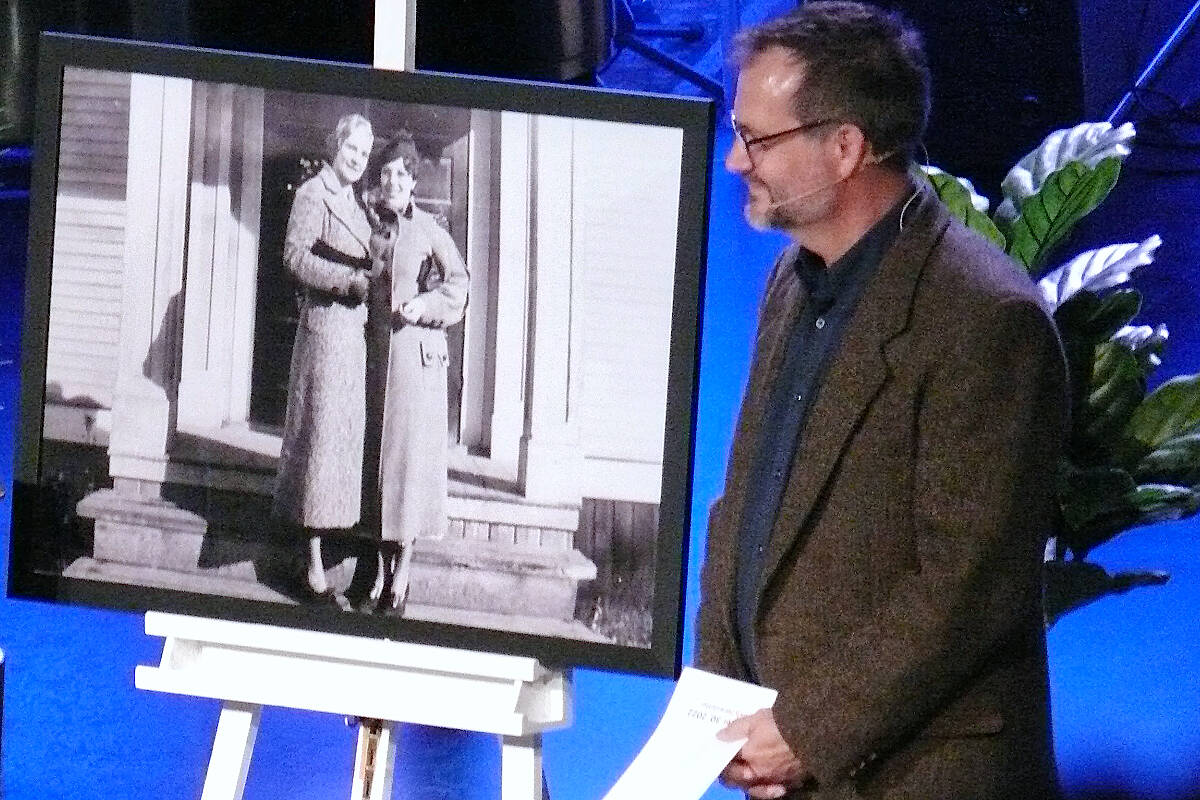 Christian Life Assembly lead pastor Derrick Hamre, stands next to a photo of church co-founders Jennie Gaglardi (left) and Loreen Drury, who originally founded the church in 1937. On Sunday, Oct. 30, it was announced that a new affordable housing project, being built by the church in concert with B.C,. Housing, will be named after Gaglardi. (Dan Ferguson/Langley Advance Times) 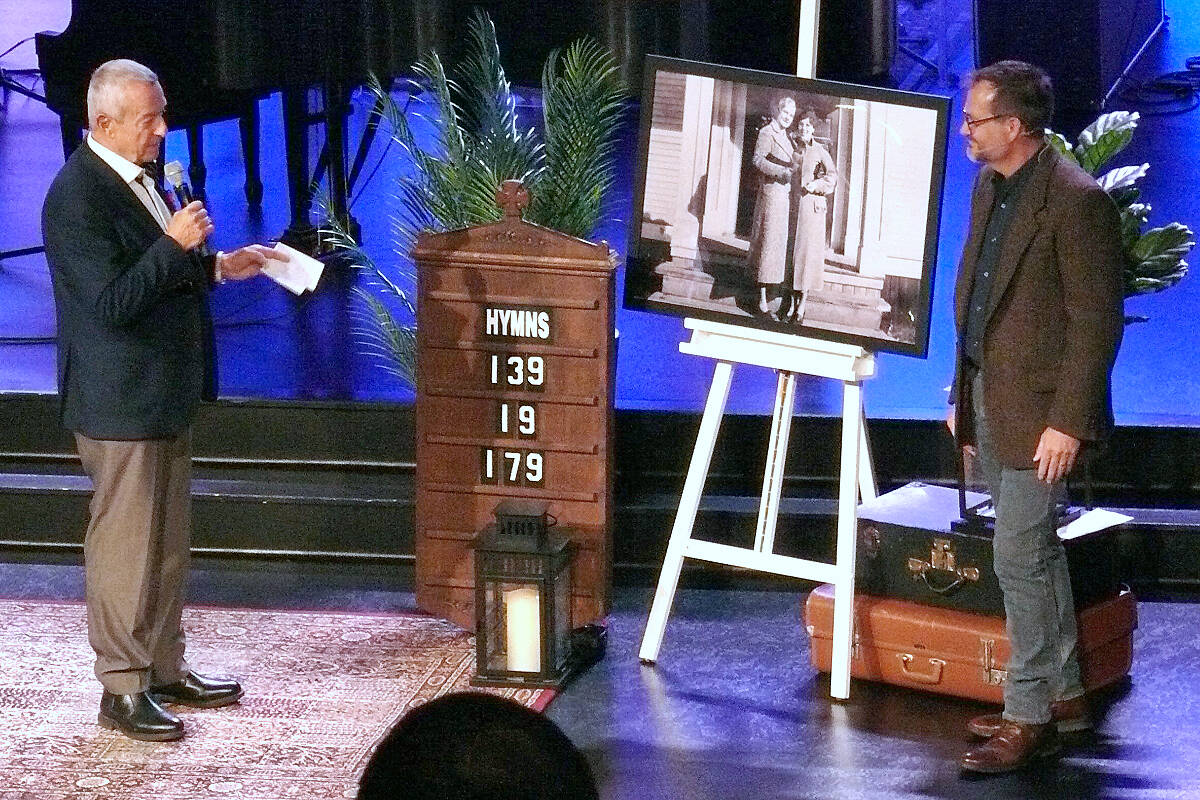 On Sunday, Oct. 30, Langley’s Christian Life Assembly church celebrated its 85th anniversary by dedicating a new housing project in the name of the late Jennie Gaglardi, who originally founded the church with Loreen Drury. 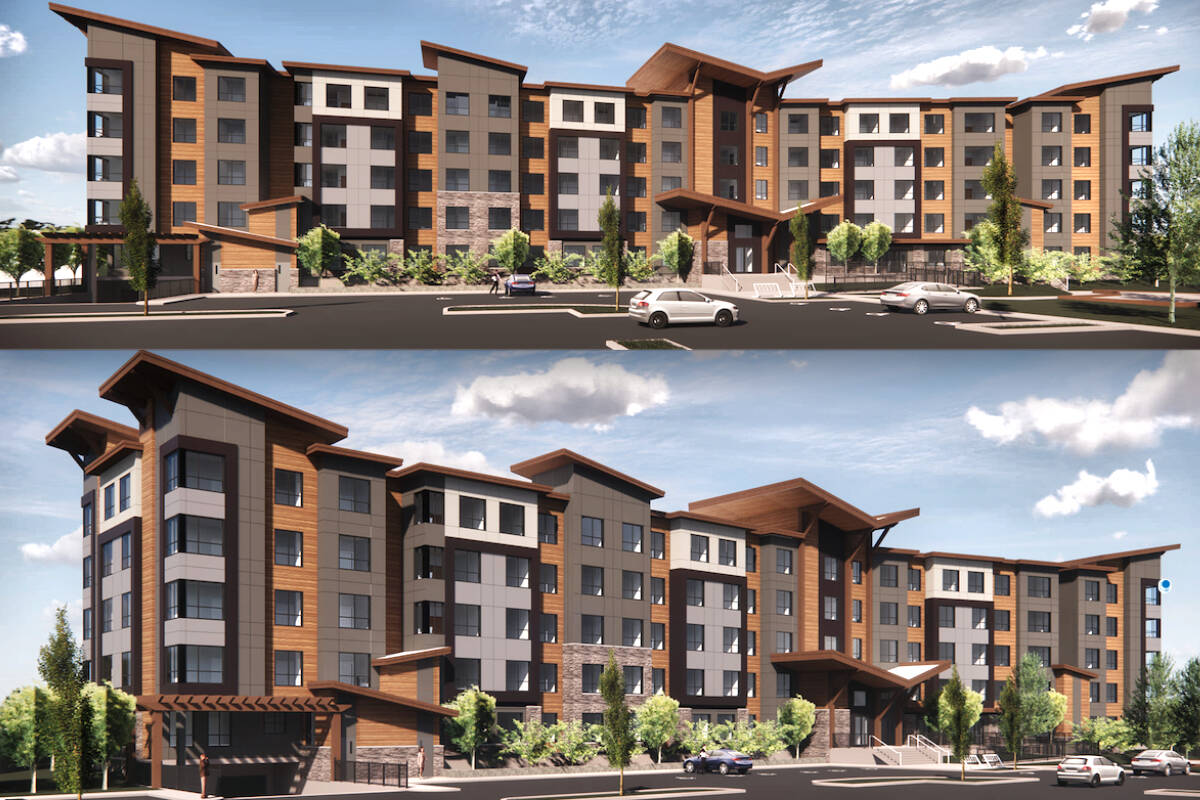 In 1937, Gaglardi and Drury came to the community then known as Langley Prairie to start up a children’s ministry, renting a small hall for $12 a month.

Through the years, the church, initially known as “Langley Prairie Pentecostal,” has grown to become the Christian Life Assembly, serving an estimated 3,000 people in Langley, Maple Ridge, Coquitlam, and Sooke Harbour.

For the 85th anniversary on Sunday, the Langley church had planned an outdoor ground-breaking ceremony, but the event had to be moved indoors because of heavy rain and wind.

Peter Fassbender, president of the CLA Housing Society, announced the project would be known as “Jennie Gaglardi Place.”

“Her commitment and heritage lives on in Langley,” Fassbender said.

Members of the Gaglardi family, including her son, Bob, took part in the dedication, including a simulated sod-turning.

One of the shovels used was from a previous sod-turning, held to mark the start of church construction.

It was contributed by the son of one of the church board members at the time.

Pastor Derrick Hamre said the church had come a long way from its modest early beginnings, praising the congregation for its generosity in rising funds for worthy projects like Ukraine relief.

Jack Froese, retiring Township mayor, attended the dedication. The mix of units, he said, “will help to provide much needed affordable homes for people in our community.”

“The construction of this project helps ensure a supply of quality, affordable homes for people in Langley, so they aren’t forced to move away from their community,” said Andrew Mercier, MLA for Langley.

Megan Dykeman, MLA for Langley East, said by helping to finance the construction of the 98 units, as well as 536 total units complete or underway in Langley, “our government is supporting valuable, affordable housing in the Langley area for a wide range of individuals, including families and seniors.”

Construction of Jennie Gaglardi Place is expected to be completed by the spring of 2024, on the western side of the church property, at 21201 56th Ave. It will be near a previous church-created housing project, Sharon Village, a co-operative housing project, located behind the CLA, that was built in 1987 by Pastor Don Cantelon and the CLA leadership.

The province is providing $10.7 million to the project through the Building BC: Community Housing Fund and will provide annual operating funding. Christian Life Assembly Housing Society is providing the land valued at $6.4 million and the Township of Langley is contributing approximately $3 million in fee waivers.

The 98-unit, five-storey, wood-frame building will provide homes for low- to moderate-income families, seniors, and individuals of all denominations in Langley, with a mix of studio, one-, two-, and three-bedroom homes, including 10 fully accessible and adaptable units.

“Partnering with Christian Life Assembly to provide other support services is the perfect outcome for the families who will call the project home,” Fassbender commented.

More photos from the day can be seen online at the Langley Advance Times Facebook page.