It’s been another successful year for the Cloverdale Christmas Hamper Program.

This year the initiative helped people in about 500 households, says coordinator Matt Campbell.

“I like to say a huge thank you to the community as a whole for getting behind the program. We couldn’t do it without the support.”

That support includes donations and also the help of more than 2,000 volunteers.

“We have about 250 volunteers here today,” Campbell explained. “We had probably 1,500 volunteers come through and pack over the week, and then we have another 500 volunteers that help collect different (donations).”

The families that benefit from the program run the gamut.

“Our largest family has two adults and eight children and that size runs all the way down to our smallest household, which is a 92-year-old senior woman.”

The #cloverdaleBC Christmas Hamper Program distributes their food boxes and toys for those in need. More than 1,500 volunteers helped to sort, pack, and distribute the toys, food, and hampers. @pacific_church pic.twitter.com/leCqPXZaoF

None of that includes anything from the free second-hand store, Campbell added.

This year, the hamper program dramatically expanded its free store. They had enough items to fill Shannon Hall at the Cloverdale Fairgrounds. Campbell said they have had limited, free second-hand items in the past, but nothing like this year.

“We’ve had the free store for the last two years, but this year it’s the biggest it’s ever been because of the [increase in] donations.”

Campbell said the free store is mostly made up of gently used clothing and toys, but there are also other items such as kitchen and household things.

“We had an overwhelming response from the community in terms of giving to our free store, which is an added bonus this year,” he said.

The Christmas Hamper Program is about coming together, added Jen Temple.

Temple volunteers each year with the hamper program in various capacities.

“From donors to volunteers to the people they serve, the program builds community,” she said. “We want people to feel safe and welcome here. After they shop and get their gifts, we also encourage them to stick around for coffee and some lunch.”

Bill Van Geeman takes a week off work each year to manage the whole operation at the Fairgrounds.

He’s there when the donations are brought in, he coordinates the volunteers who sort the donations all week, and he’s there up until the last item gets distributed to the last family in need.

“I’ve been doing it for about four or five years,” said Van Geeman. “I look at my life, and I look at how God has blessed me. How can I not want to pass (that blessing) on?”

Van Geeman said he also loves to give back to such “a great community.”

“Our business has been in the Cloverdale Community since 1991,” said Zinetti. “We just want to give back to the community. They’ve always supported us.”

Zinetti Foods makes frozen gourmet pasta and entrees. They began their relationship with the hamper program in 2017.

Zinetti has also been a sponsor of another Pacific Community Church initiative: The Coldest Night of the Year fundraising event in February. Zinetti donates all the chili for volunteers and participants.

“We’re really proud to be a part of the hamper program,” added Natalie Zinetti, Zinetti Foods co-owner, and Maurizio’s wife.

The hamper program works as a well-oiled machine with various church groups and other volunteer groups forming different parts that all spin in a greater unison to achieve a singular goal: making a brighter Christmas for the less fortunate.

There are greeters, food distributors, gift facilitators, and drivers. (The drivers take people home so they don’t have to tote their new gifts, groceries, and clothing on the bus.)

There are donation deliverers, sorters, and packers.

“We have eight different churches that are have people volunteering here,” said Campbell. “There are about 60 different businesses that have sent people in during the week to help sort. We’ve had a lot of school and sports groups come through. It’s a full-on, community-wide event.”

Campbell said the program now helps people in other parts of Surrey, and Langley and White Rock.

“It mostly helps people in Cloverdale, but it also spills over into other communities in the area to reach some seniors and families that are on the fringes of their local communities.” 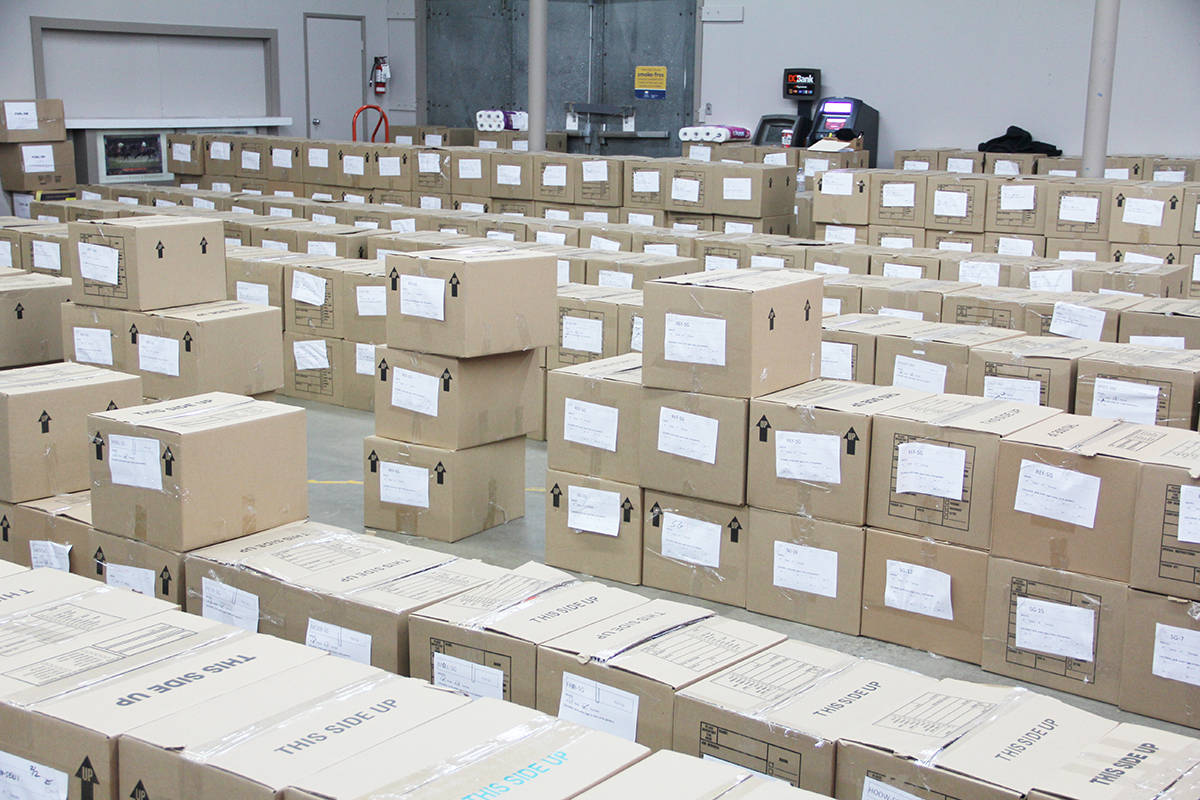 Christmas hampers are ready to be given out to families in need Dec. 21 during the Cloverdale Christmas Hamper Program’s distribution day. (Photo: Malin Jordan) 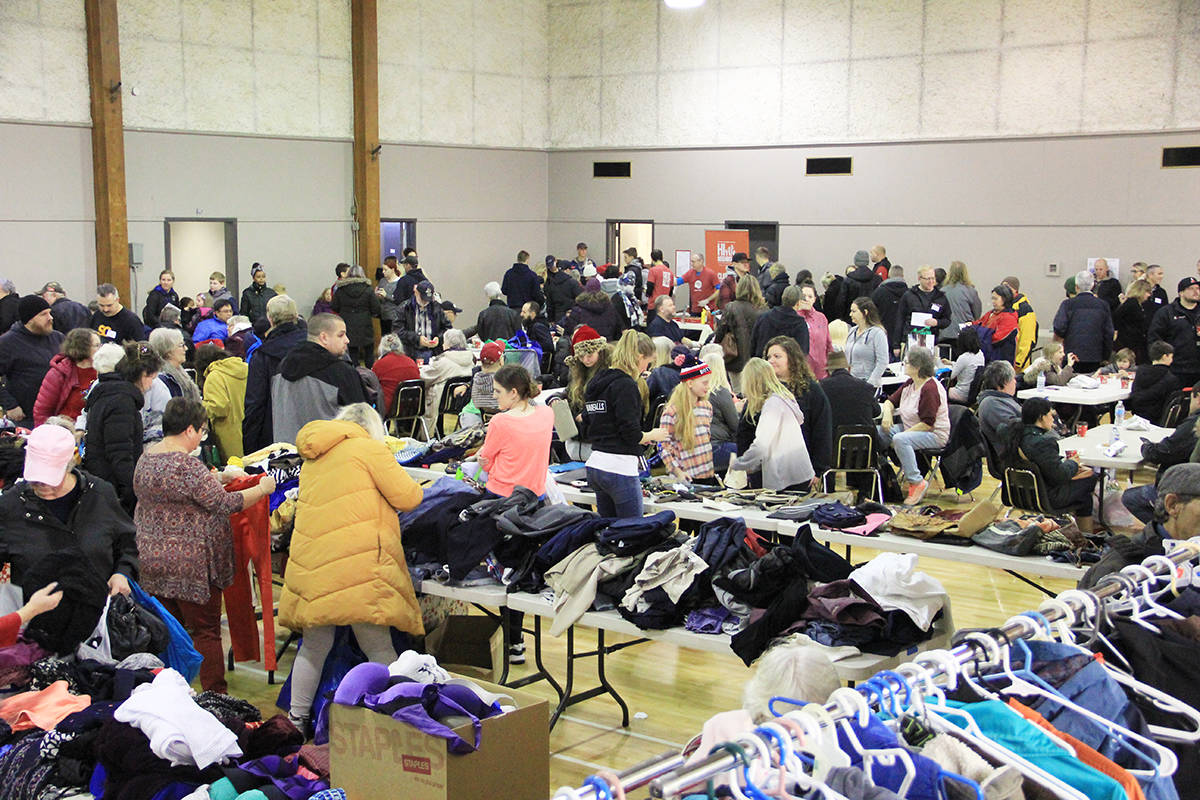 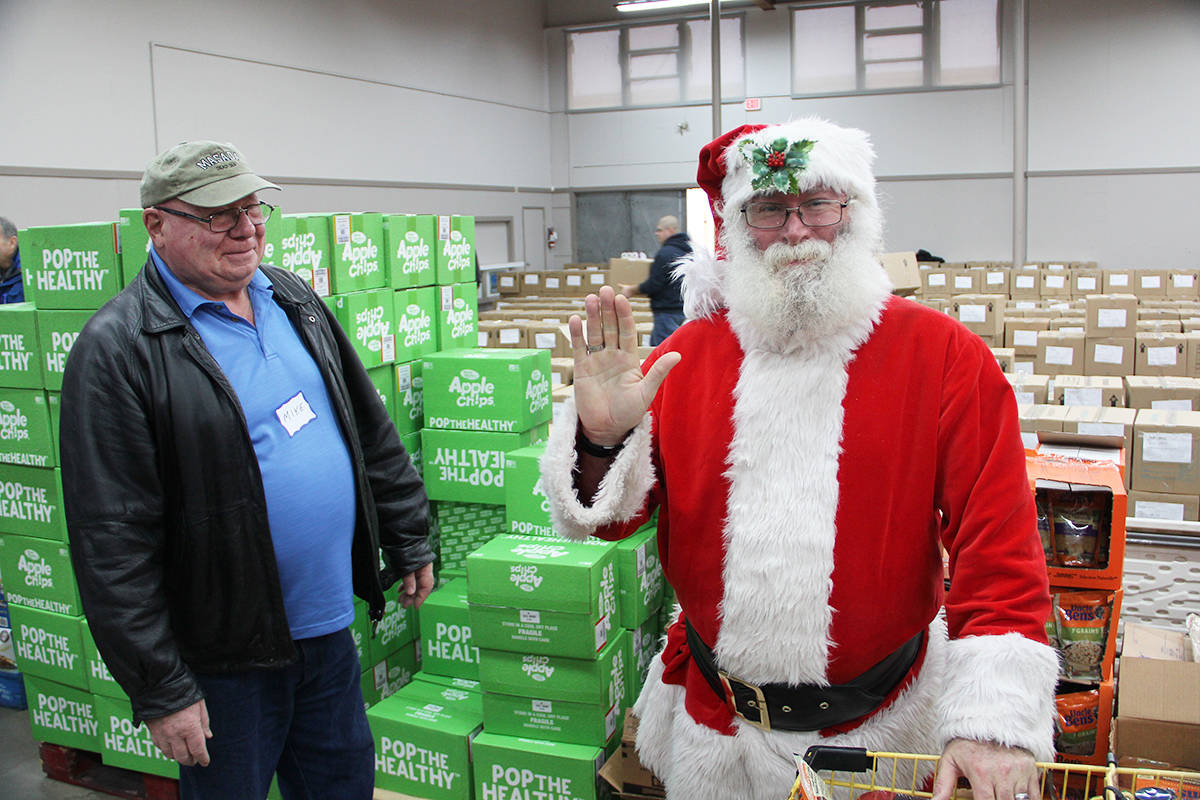 Ben “Santa” Cohen shops for free food at the Cloverdale Christmas Hamper Program’s distribution day Dec. 21. Cohen, a low-income earner, was ready to hang up his Santa hat—something he does to earn extra money—because he was in need of serious dental work. After receiving free dental work through a mobile clinic, Cohen was able to book more than 40 Santa gigs in 2019. (Photo: Malin Jordan)

Langley Then and Now: No more smoking or non-smoking sections as of 2000