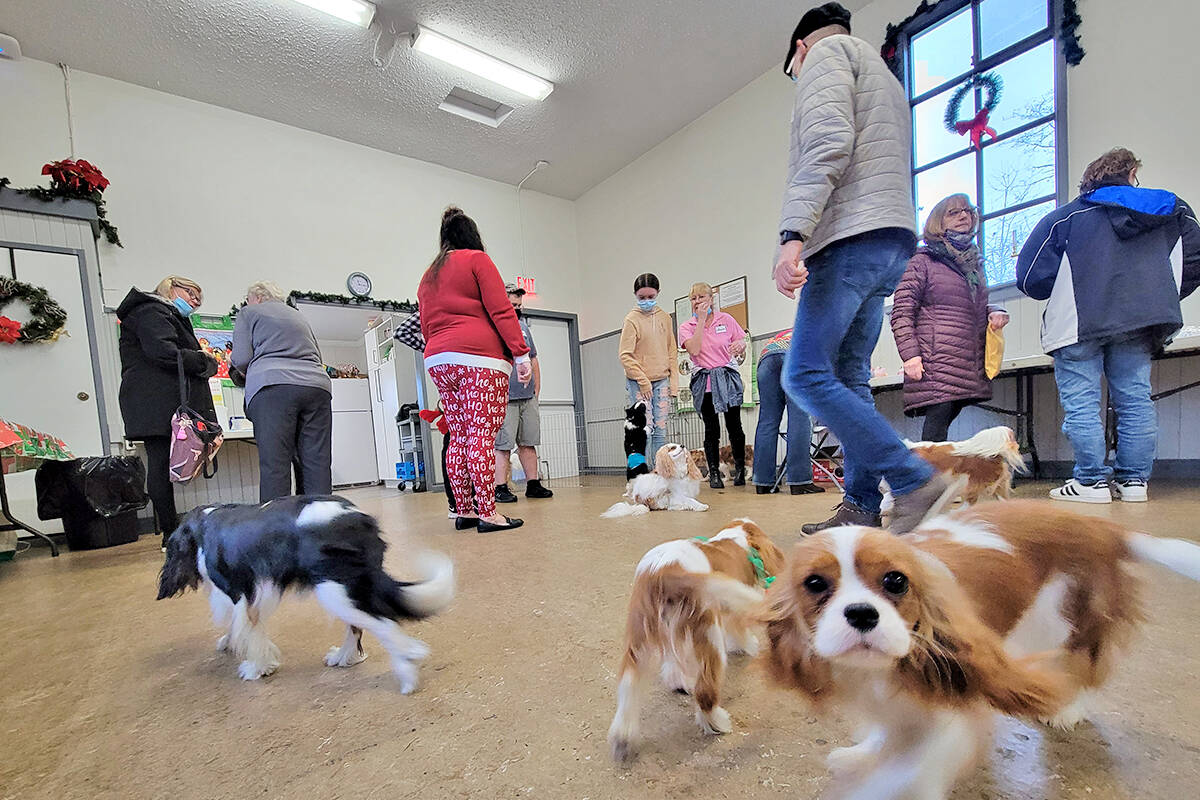 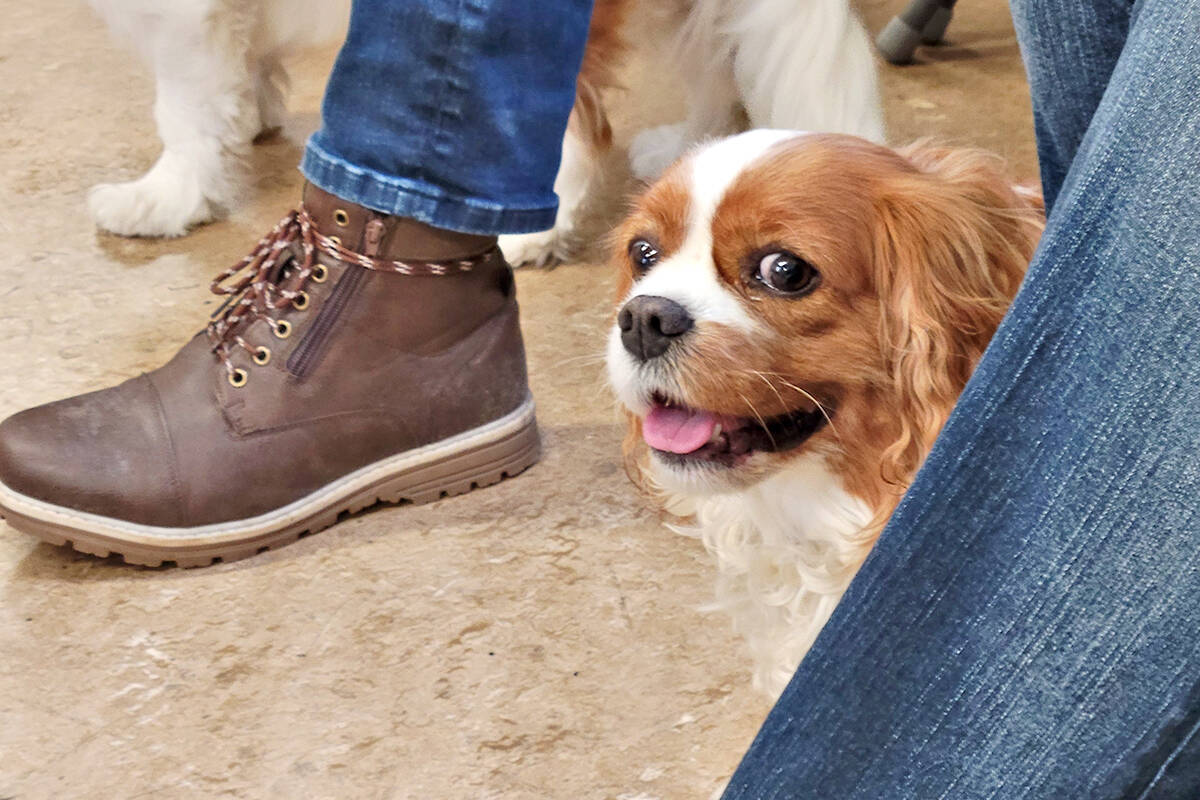 ‘Cavaliers are naturally curious and playful, but also enjoy simply cuddling up on a cushion or lap’ according to an online description. On Saturday, Nov. 27, the Cavalier King Charles Spaniel Club of B.C. held its annual Christmas get-together at Harmsworth Hall in Langley. (Dan Ferguson/Langley Advance Times)

As he explained the appeal of Cavalier King Charles Spaniels, Joe Chicorelli kept getting interrupted by friendly, bright-eyed examples of the breed – all eager to say hello.

On Saturday, Nov. 27, at Harmsworth Hall in Langley, the club held its annual Christmas get-together, drawing about 50 people and their pets to have pictures taken with Santa, and, mostly, play games and visit.

“We just let the dogs enjoy themselves, Chicorelli said.

“The main purpose of the breed is companionship. They used to use them for flushing small birds out, but nowadays they’re content sitting on your lap and watching TV.”

It had been two years since the last club Christmas event, after the 2020 event had to be called off because of the COVID-19 pandemic.

With dozens of dogs in one space, there were no displays pf bad temper, other than the occasional bark of protest when a particular pup felt enough attention wasn’t being paid.

Aldergrove resident Pete Wonitowy arrived with Caruib Tallyho 2, who, with sister Teaka appeared in two dog-centric Hallmark movies, “Unleashing Mr. Darcy” a modern spin on “Pride and Prejudice,” where the plot turns on Elizabeth Scott having the opportunity to professionally show her Cavalier King Charles Spaniel in a fancy New York dog show – and the sequel, “Marrying Mr. Darcy.”

“They only did two movies,” Wonitowy explained.

“It just sort of came about” when a movie company let his wife know they were looking for dogs for a movie.

“I’ve had cavaliers since I was a kid, Wonitowy told the Langley Advance Times, ” from 18 to 64.”

“They get so attached to you.” 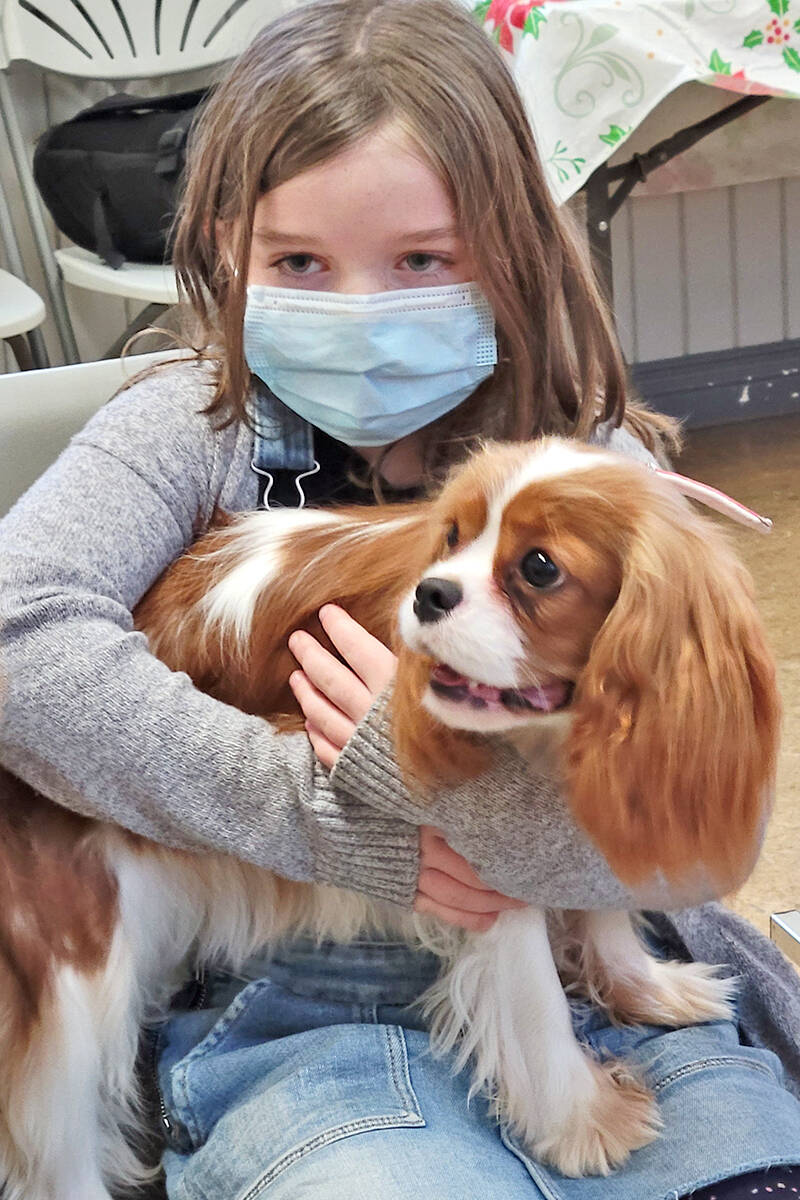 At 6, Clodagh Gannon from Chilliwack was one of the younger attendees on Saturday, Nov. 27, when the Cavalier King Charles Spaniel Club of B.C. held its annual Christmas get-together at Harmsworth Hall in Langley. (Dan Ferguson/Langley Advance Times)

He and spouse Maureen met some of the many Spaniels sired by their dog Brewster, four immediate offspring and two grand-puppies.

“You can have them altogether and there’s no growling,” Maureen remarked.

An online description of the Cavalier King Charles Spaniel said the breed is “highly affectionate, playful, extremely patient and eager to please,” good with children and other dogs.

“Cavaliers are naturally curious and playful, but also enjoy simply cuddling up on a cushion or lap, making them excellent companion or lap dogs for medical patients and the elderly.”

Registered with the Canadian Kennel Club, the B.C. group’s stated aim is to “support and preserve the Cavalier King Charles Spaniel breed.”

Membership consists of breeders, exhibitors, competitors in the obedience, agility and rally rings, “and families who just own and love their Cavaliers.”

More information about the breed and the club can be found online at www.cavalierclubbc.com or on the Facebook page for “Cavalier King Charles Spaniel Club of BC.”

More photos from the event can be found online at the Langley Advance Times Facebook page.

READ ALSO: Pandemic sparked puppy boom in B.C., but no spike in pet returns: BC SPCA

An inside look at film and television, courtesy of Brookswood Secondary alums