It took hardly any time at all to fill the police vehicle, a Ford Explorer patrol cruiser, with donations for the Langley Food Bank at the first-ever “Pack the Police Car” drive-through at Willoughby Town Centre on Saturday, Dec. 19.

So it was a good thing that the Langley RCMP brought a full-size van for the overflow, said Cpl. Julie Bion, a Langley RCMP Community Policing Section officer.

“Not only did we stuff the back seat of the Explorer, it overflowed into the Chevy extended van,” Bion said.

By the time the RCMP were done collecting donations in the parking lot of the shopping centre, they had filled the big van three-quarters full with non-perishable food items and collected $1,533 in cash donations as well.

It was the first fill-the-police car event to be staged by the Langley RCMP, done in conjunction with the Walnut Grove / Willoughby Business Association (WWBA).

It was wet, miserable weather, but that didn’t seem to matter, said Cpl. Craig Van Herk.

“Donations poured in more than the rain,” Van Herk laughed.

It was an all-too-rare outing for the Langley detachment Community Policing Section, whose officers saw their offices closed ,and the range of public events they can arrange, sharply limited by the pandemic.

Subject to case counts, and new or ongoing provincial health orders and guidelines, the Township of Lamngley has said the Community Police Offices (CPO) status will be “re-evaluated in the new year with the key consideration of keeping community members who access the CPOs and employees who work in them safe and healthy.”

There are three CPOs in the Township, in Aldergrove, Willowbrook and Walnut Grove, and one in Langley City.

Civilian staff at all of the CPOS are Township of Langley employees, which is why the CPO in Langley City remains closed as well.

READ ALSO: A parade of aid for Aldergrove food bank and Ishtar

Const. Phil Colter, who was helping out at the Willoughby event on Saturday, had just been appointed to the Aldergrove community policing office in June, as the COVID-19 outbreak was tearing through the Lower Mainland.

Colter helped organize an instant drive-through event at the Aldergrove Legion a week earlier, working with other community groups to pull it together in a matter of just five days.

Intended to help the Langley Food Bank and the Ishtar Women’s Resource Society, it produced a similar, sizable response.

“We had over $4,000, five minivans [full of food donations] and Ishtar received two vehicles of toys,” a pleased Colter estimated.

Cpl. Bio said it was just good for the community officers to actually be out in the community, albeit with COVID prevention measures that included masks, gloves and social distancing.

Even the RCMP safety bear wore a mask for the occasion.

There were separate entry and exit points to avoid congestion of cars and congregating of people and donors were asked to stay in their cars when they dropped off items.

“We were overwhelmed by the community support,” Bion told the Langley Advance Tines.

This year, the officers noted, even more so than years past, donations to the Langley Food Bank are urgently needed.

There are currently about 700 client families in the Langleys who access the Langley Food Bank for assistance. 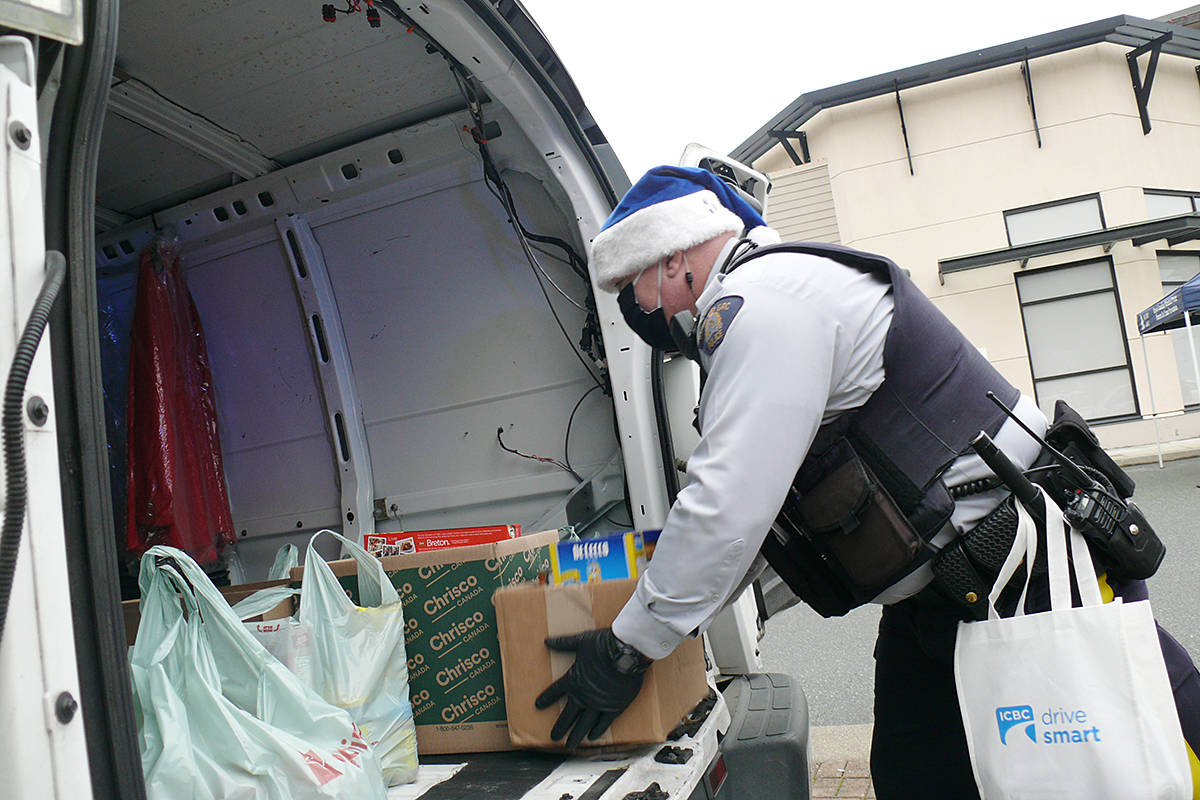 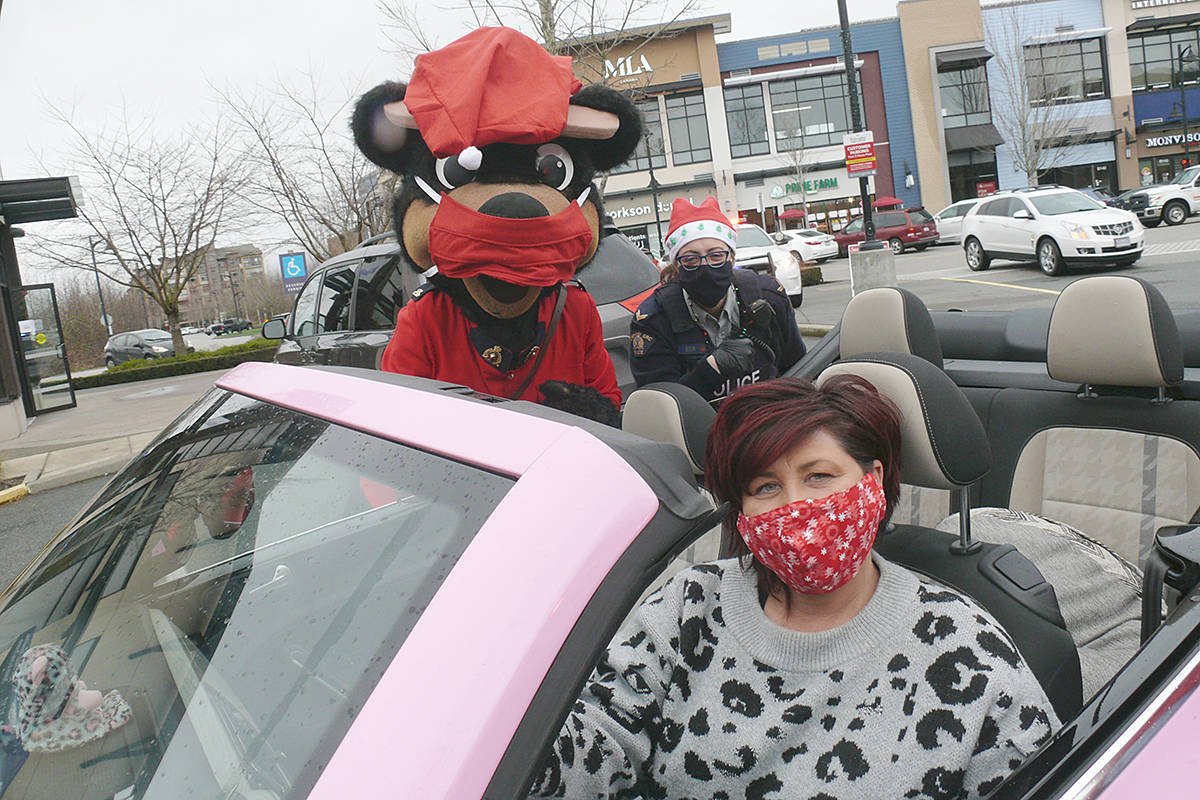 Langley City Mayor Val van den Broek was among the many donors who dropped off contributions at the Saturday, Dec. 19, 2020 Pack the Police Car event held at Willoughby Town Centre to help the Langley Food Bank. (Dan Ferguson/Langley Advance Times) 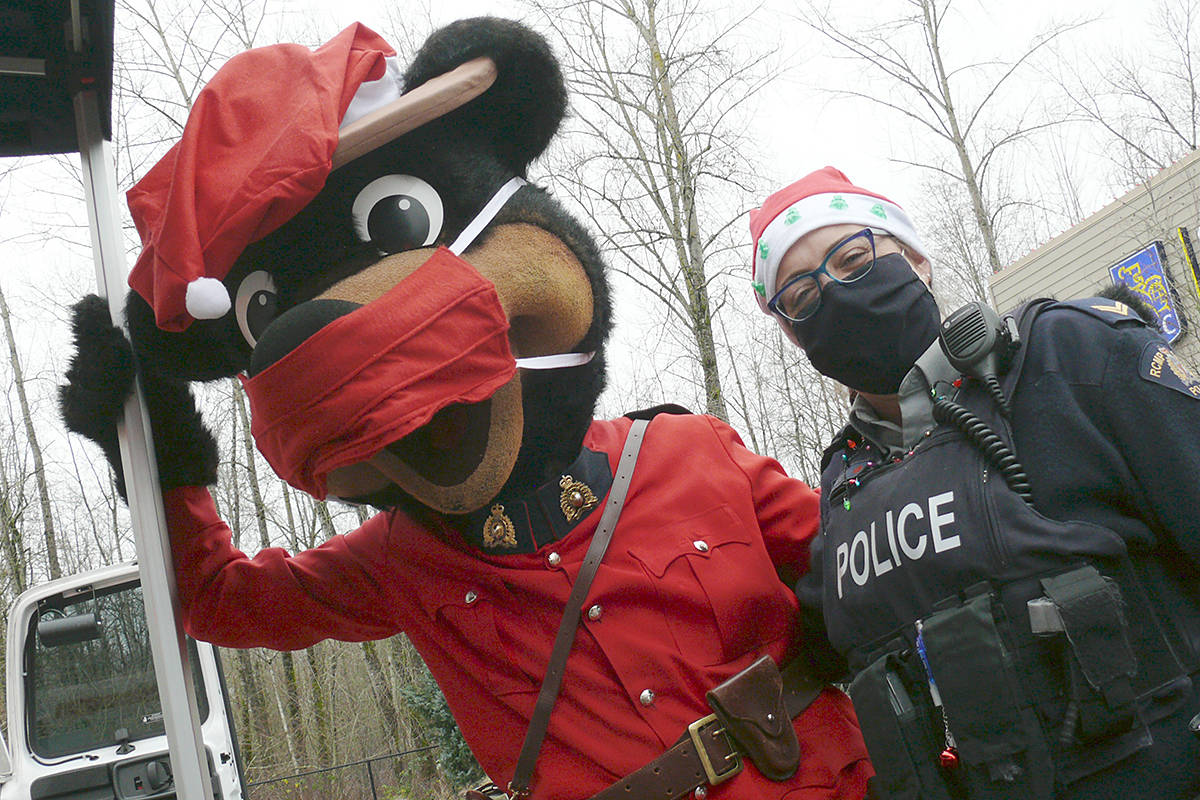 Langley student wraps up kindness in every gift bundle