Mike Gee thinks his son Seamus might have found the help he needed if there had been a dedicated mental health facility for young people in Langley.

“I think it would [have made a difference],” said Gee, a Langley City resident who founded the non-profit Seamus Gee Legacy Fund that helps local students access trades programs, as well as community and school sports programs, in his son’s memory.

“It’s one of those things, it’s hard to tell,” Gee told the Langley Advance Times.

Gee spoke Tuesday, Oct. 19, at the official launch of a fundraising campaign to build Langley Foundry, an integrated health and wellness centre for youth. He called it “long overdue and much needed.”

Hosted by Encompass Support Services Society, the 7,600-sq.-ft. space at 20618 Eastleigh Cres. will provide integrated services, including counselling for physical and mental wellness, substance abuse, sexual health, and life skills training, when it opens in 2022.

“My hope is youth in the community will find it a warm and welcoming place,” Gee said.

Currently, young people looking for help face “barrier after barrier,” said Christine McCracken, executive director of program services at Encompass. She demonstrated how hard it can be by having members of the audience at the launch simulate trying to get help with their phones. None could. 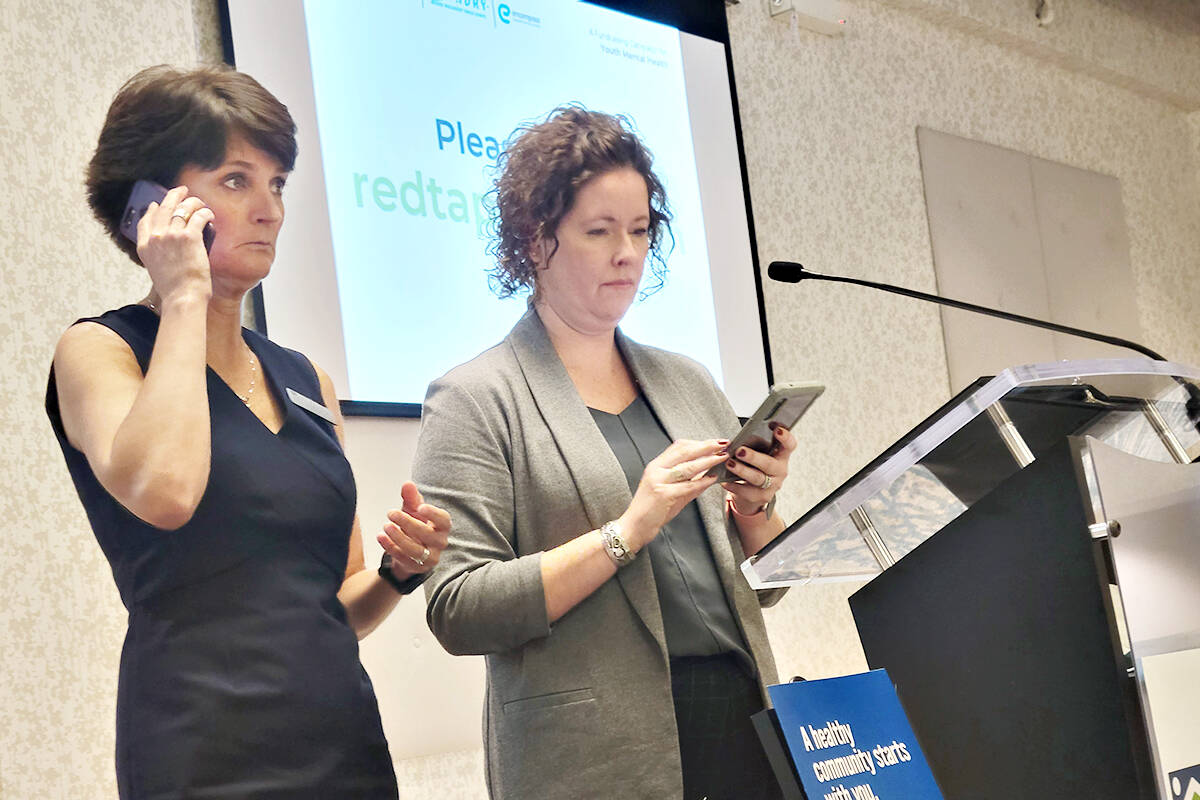 Encompass executive director of programs Christine McCracken (right), with Langley Memorial Hospital Foundation executive director Heather Scott, demonstrated how hard finding help with a phone can be. It was at the Tuesday, Oct. 19 launch of the fundraising campaign for Foundry Langley, a mental health facility for young people. (Dan Ferguson/Langley Advance Times)

“I can say with certainty our young people are facing higher rates of mental illness and substance abuse than any other age group,” McCracken remarked.

Langley City Mayor Val van den Broek shared the memory of a young girl who showed up, badly beaten, at a RCMP community police station – trying to get help.

“We tried to get her services and no-one came,” van den Broek recalled.

“We need to do more,” van den Broek said.

Heather Scott, executive director of the Langley Memorial Hospital Foundation – which is coordinating the fundraising campaign – pointed to a 2020 survey of young people in Fraser South region. The survey found close to half of those aged 12 to 24 said they needed mental health services, but didn’t seek them out because they didn’t know where to go.

“Behind these statistics is a vulnerable young person with a future of potential and promise, but they risk falling through the cracks when the very system designed to provide support instead creates barriers and red tape, and wait lists that delay timely support to life’s biggest challenges,” Scott said.

Scott revealed the campaign was already 55 per cent toward its goal of $2.1 million, including lead donations such as a $150,000 contribution by Infinity Properties’ Tim and Petra Bontke’s Heart and Soul project, and $100,000 each from McDonald’s Sarocemas Inc., Beedie Foundation, Vesta Properties, Nuranev family/A&W Langley, and Caliber.

Donors are invited to contact the foundation or visit FoundryLangley.ca for more information.