Nermal uttered high-pitched squeaks of protest as Jayne Nelson gently lifted the orange and white kitten from his cage.

He was somewhere between seven and 10 days old, rescued by a good Samaritan who brought the abandoned kitten to the Patti Dale animal shelter in Aldergrove.

“This is very common for us this time of year,” Nelson said.

Nelson, the executive director of the Langley Animal Protection Society (LAPS), said the shelter, located at 26220 56th Avenue, currently has 71 kittens in care, and more were expected to arrive.

It was the weekend Kitten Roundup, the sixth annual event where people are encouraged to bring in kittens up to six months old, or pregnant or nursing cats that are unwanted or feral, to the shelter.

“Kitten season is in full swing and we are certainly all set and ramped up,” Nelson said.

“We’re set for however many come in.”

She returned Nermal (named after the cute kitten character from the Garfield comic strip) to the comfort of a soft blanket and the warmth of an artificial mother cat in his cage.

“She’s got a heart beat and there’s a heating pad.”

Elsewhere, in an isolation room at the shelter, Walnut (Wally for short) and his littermates were getting antibiotics to cure severe upper respiratory infections that had left their eyes puffy and barely able to open.

Wally and his siblings were part of an orphaned litter discovered huddled and starving in a barn, not far from where their mother was found, run over by a vehicle.

Nelson said the five kittens had been without food for at least three days, and one did not survive.

LAPS Kitten Roundup 2019 began Saturday and was set to continue on Sunday.

Anyone with a Langley address, who had a pregnant cat or litter of kittens they can’t afford to care for, could bring them to the shelter during the daytime.

Proof of address was required.

“We took in a ton of kittens,” Nelson said.

During the week of the roundup, 30 arrived at LAPS.

That brought the number of kittens in care to 80 with the total expected to rise to more than 300 this year.

“We are grateful to all of our foster parents who open their hearts and homes every year to these little families,” Nelson added.

“As you can imagine, that many kittens eat a lot of food,” Nelson observed.

LAPS estimates 80,000 kittens will be born this year in Langley and 75 per cent will die within six months if they aren’t rescued.

Those that survive will start getting pregnant as early as four months old.

LAPS will have a limited number of free spay/neuter certificates available for Langley residents on a first come, first served basis available at the shelter on Roundup day.

As a no-kill shelter with limited capacity, LAPS is only able to take pregnant cats, nursing moms with kittens, and kittens under six months of age during the event. 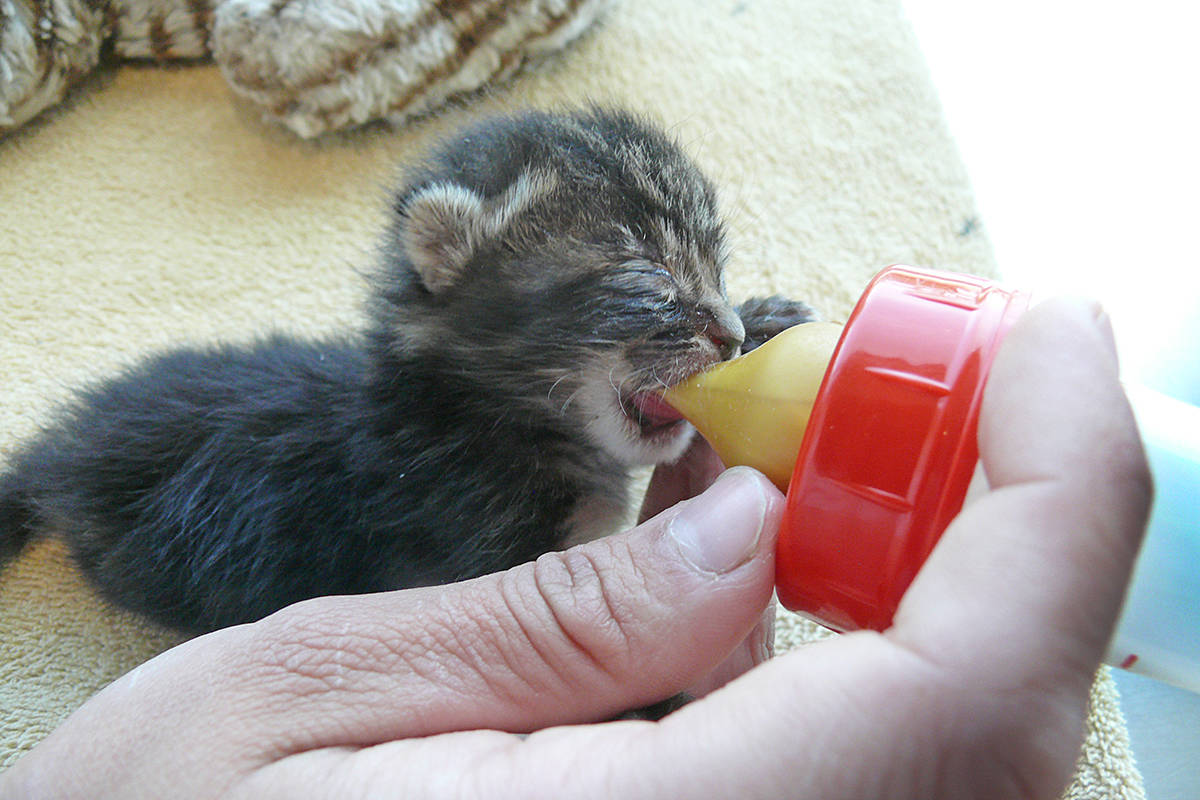 Wally and his siblings were found orphaned and starving in a Langley barn. Dan Ferguson Langley Advance Times