Jacob Collin Dolendo is a calm, good-humoured nine-month-old with big, expressive eyes and a ready smile who doesn’t fuss much and sleeps soundly.

His mom likes to call him “Jakey.”

“My son is a very happy boy,” mom Cecilyn Estrella said, as Jacob snuggled close to dad Jonel Dolendo during a visit by a Times reporter.

He is their first child.

While he is generally an even-tempered kid, Jacob doesn’t much like needles, and there have been a lot of them since he was diagnosed with infantile acute lymphoblastic leukemia (ALL) in February.

Jacob is on his second round of intensive chemotherapy since the diagnosis, and he is the youngest patient in the Vancouver oncology ward where he is undergoing treatment.

He’s in remission right now, but he still has to undergo continuous chemotherapy because of his age and the risk of having a relapse or a second form of cancer.

Mom quit her job to look after her son, but dad has had to keep working.

The family has also been told that the Burnaby apartment they live in is going to be demolished in about three months, and that will mean an expensive move at a time when their finances are already stretched to the breaking point.

On Friday, Jonel and Cecilyn became the latest family to benefit from a Langley-based campaign by a father and son to help people cope with the cost of fighting cancer.

Langley resident Ashley Samborski and his dad Gerald delivered a cheque to the hospital where Jacob was being treated.

“This is $5,000 that’s going to help them out and take a little bit of stress off their back and that’s what we’re all about,” Ashley said.

“This is exactly the type of family I dreamed of helping when I was in the hospice next to my mom.”

Adeline Samborski passed away from pancreatic cancer in 2013.

In the hospice, her son got to see first hand just how many people were struggling with finances while a loved one was fighting cancer. He was one of them.

“I missed a lot of work,” Ashley said.

“My dad helped me out with bills (and) I said, ‘you know there’s people out there who don’t have a dad to help them out.’”

Since then, father and son have been patiently raising money, a little at a time, looking for donations and selling T-shirts, looking to help people cope with the costs of fighting cancer.

They helped their first family in 2015.

Jacob and his mom and dad are the second family they have assisted, and there will be a third down the road, just as soon as they have enough money collected.

The first time out, Ashley set up a website calling the campaign “Ef Cancer” which, depending on the audience, stood for “everyone fights cancer” or something less polite.

That website has been retired and replaced by a new site, www.helpinghearts.ca.

“I think when I came up with my old name I was a little bitter with cancer and you know, I’ve calmed down a little bit,” he said.

He credits his dad with driving the second fund raising campaign, literally, to success, by making the rounds of “basically all the restaurants in the Lower Mainland” looking for donations of gift cards that could be raffled off.

Companies like the Keg, Brown’s, Cactus Club and Princess Auto, as well as the Gone Country concert and fundraiser to fight cancer in Cloverdale (who gave them space to sell T-shirts), were all generous contributors, Ashley said.

“The money just flooded in,” he said.

“All the people were really excited by what we’re doing,” Gerald said.

“They were saying it’s a good thing.” 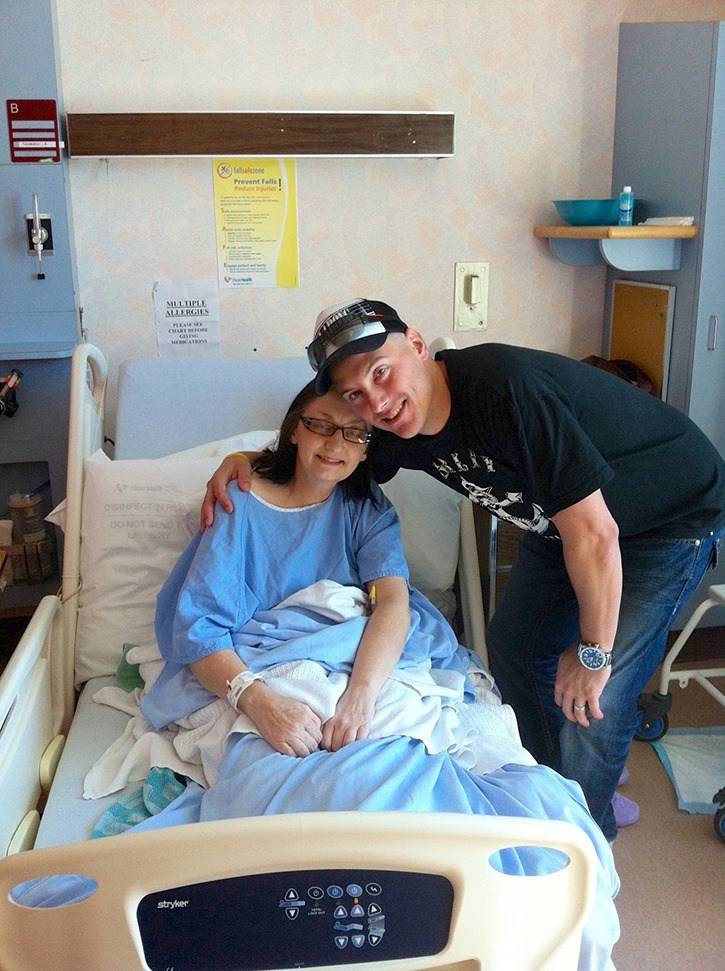 This photo of Ashley Samborski with his mom, Adeline, greets visitors to the website www.helpinghearts.ca