Walter Thompson was captain of the famed Queenie Lancaster during the Second World War.

He flew with the Pathfinders 83 Squadron as part of an elite crew of aviators who would fly in ahead of all the others and drop flares to mark where sometimes hundreds of subsequent bomber pilots needed to concentrate their payloads.

“My father was a bomber pilot in the Second World War, and he did 50 missions over Germany flying a Lancaster,” said his son David, proud of his father’s very distinguished service.

Unlike many of his fellow Royal Canadian Air Force pilots, Walter survived the war and returned home, home to B.C., where he went on to become a lawyer, author, and father of four – among just a few of his noted accomplishments.

Walter passed away in 2005, but not before imparting some of his deep-seated passion for wartime aircraft to his youngest child and only son, David.

David, also a lawyer (in Abbotsford) like his father, has since sought to create a special keepsake that would pay tribute to his father, as well as all the other RCAF members who served – especially the more than “9,900 who died in the skies over Europe during the Second World War,” David said.

“I don’t think most people today realize that almost 10,000 Canadians died while serving in the RCAF trying to rid the world of tyranny. That is a huge sacrifice that most people today are not aware of,” he added.

So, today he’s endeavouring to remember his Dad, and the others.

But David wanted to do more.

“I want to have something I can see every day,” he shared.

David wanted something he could appreciate, that would remind both himself and his children of Walter’s contributions to the war efforts.

That’s when the idea hit.

David would commission a painting of a legendary British Lancaster bomber – specifically his father’s aircraft – at work.

He turned to a friend, fellow Murrayville resident, former-commercial-pilot-turned-realtor, and talented artist Bryan Coombes to help create an appropriate tribute.

That legacy came to life in the form of a 36”x12” oil painting depicting the Queenie flying over the English countryside towards Germany.

“He actually flew this Lancaster – the most famous Lancaster in Allied history. It did 151 missions over enemy territory. And he flew it in July 1943,” David said, hard pressed to look away from his new piece of art.

The painting was revealed to David Tuesday, at the Canadian Museum of Flight – an appropriate backdrop.

David recounted meeting with Coombes almost a year earlier, giving him some of his father’s pictures, and explaining a little bit about what he envisioned.

“I kind of left him at his own whim, to do what he could do, and he produced this magnificent painting,” David said.

His father’s passion for the Lancaster aircraft lived on long after Walter returned home to Canada.

Walter became “somewhat of a Lancaster expert,” writing a book called Lancaster to Berlin. There were 30,000 copies published in Britain and Canada, his son has two different editions of the book.

“He was a bit of a celebrity in Lancaster circles – which is not a very big circle, because most are dying out,” David said.

“But he died about 12 years ago, and I wanted to kind of keep his memory alive and hopefully generate some interest in WWII airplanes with my children [two daughters]… to preserve that memory and that legacy.”

He’s overjoyed with the results.

Coombes said he “absolutely loved painting it,” literally putting the final touches on the canvas just two days before the reveal.

“I’ve always found a profound beauty in World War II-era aircraft, even though they were such a purpose-built aircraft,” Coombes said.

“The successful aircraft that were designed to fly over the European theatre of war at the time were beautiful airplanes, and the Lancaster was one of the prettiest airplanes – in my mind. It was really interesting to put it into the setting and depict it in a sense of storytelling, as to what this airplane did in the early hours of the war – before it headed out over German territory to do its thing.”

Both Coombes and Thompson are planning to be at Saturday’s Remembrance Day services.

He’s been attending the official ceremonies in the village since it started a several years ago. It, too, holds sentimental meaning since his father is buried in that cemetery.

Asked if he’d be accompanied by his family, David felt it was doubtful. 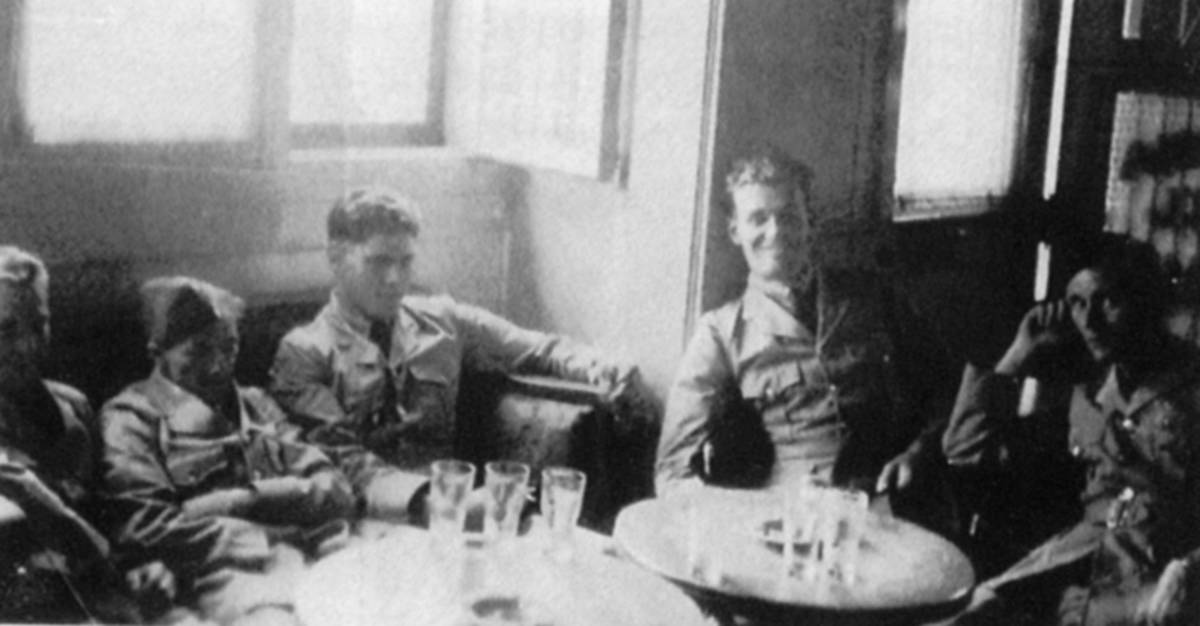 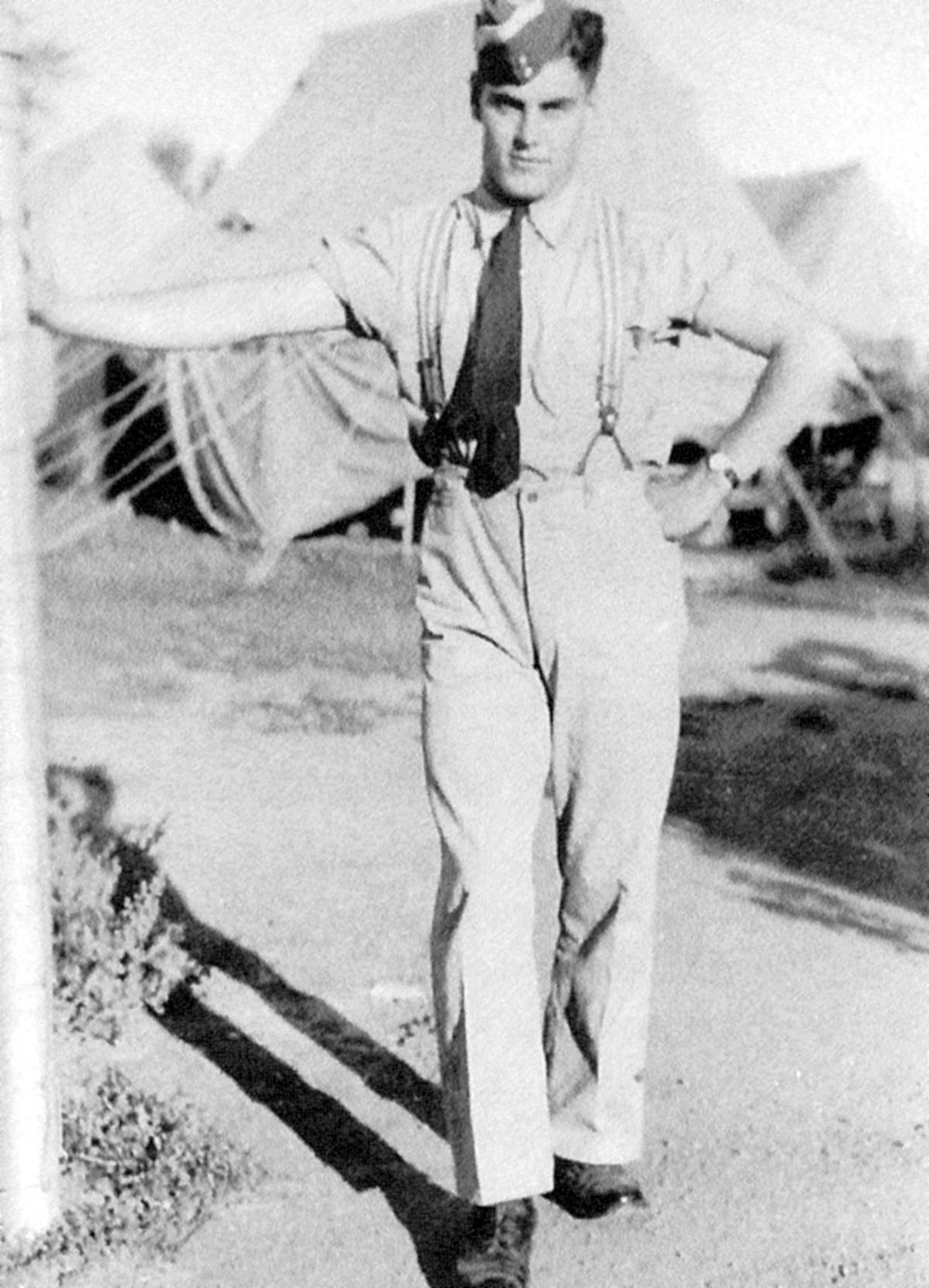 Walter Thompson enlisted with the air force in 1941, trained in Saskatchewan, and went overseas in 1942, initially being stationed with the 106 Squadron and Guy Gibson, a famous bomber pilot who led in the “Dam Busters” raid in 1943, resulting in the destruction of two large dams in Germany. He was later shifted to the 83 Squadron where he became a pathfinder. 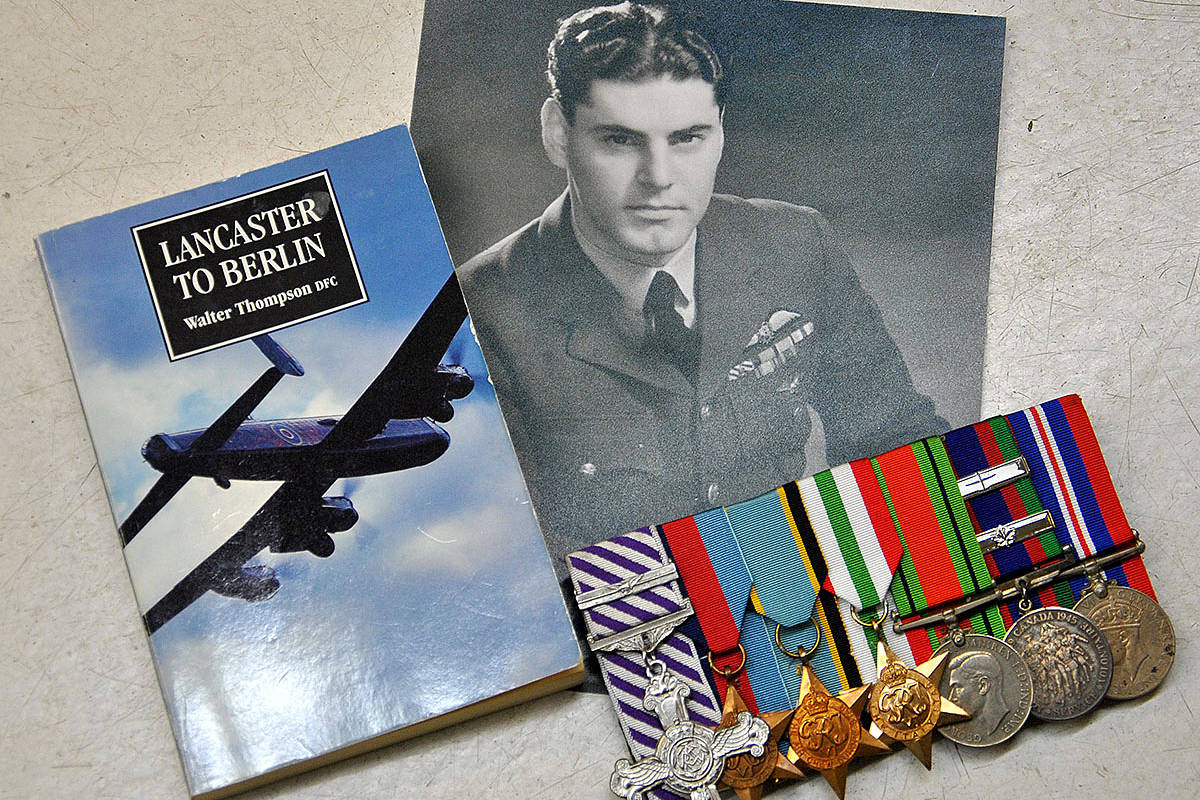 Walter Thompson enlisted with the air force in 1941, trained in Saskatchewan, and went overseas in 1942, initially being stationed with the 106 Squadron and Guy Gibson, a famous bomber pilot who led in the “Dam Busters” raid in 1943, resulting in the destruction of two large dams in Germany. He was later shifted to the 83 Squadron where he became a pathfinder.

Langley woman wants to bring the community to the dinner table