In her work with the Langley Hospice Society, Dorscie Paterson spent more than three decades comforting people about to leave this world.

But it would be a mistake to assume Paterson, who turns 105 years of age Thursday, Jan. 25, spends a lot of time thinking about death.

Whether it was good genes or a lifetime of being active that put her in the category of centenarian, it’s surely her inquisitive and upbeat attitude that added the quality to those years.

She still makes plans for the future, including grabbing a shovel and turning the sod on the new $7-million, 15-bed hospice freestanding building that’s approved and should start construction soon.

When she was 100, Paterson was still driving, still volunteering. She’s now an honourary director of the Langley Hospice Society which she helped found.

The Langley Hospice Society started up on a shoestring, borrowing $50 from the Lady Lions for stamps and a phone line.

The members went to seminars or courses and learned about the grieving process and the end of life.

Paterson recalls that people needing medical care in the lead up to their deaths used to be in a ward in the hospital. And she’s sat at many a bedside over the past 30 years.

She and others worked to make people’s deaths more comfortable and so people know they were cared for, but they realized the need for a dedicated facility with a home-like atmosphere for people in their final months and days.

That’s the hospice facility at Langley Memorial, though it is no longer large enough to meet the needs of this community.

Paterson is a lifelong churchgoer with friends in many denominations, which she says broadens her perspective on life, and she doesn’t hesitate to let Him know her views.

“Every night I say my prayers, and every night I remind God of all these little children where they have these wars or threats and they have no place to go, no place to lay their head. I will say ‘Remember them, God. Please remember them. They need help and I know you’ll do something’.”

As a young woman, Paterson taught at Van Tech for about a decade. This would have been before the Second World War.

She was given the girls turfed from other neighbouring schools because “they won’t behave themselves.” She was told just keep them coming back, and make sure they do some math and English work. The benchmark was pretty low because so little was expected from hard cases, but Paterson decided to try and teach them about the consequences of their decisions.

“The first place I took them was to the cancer clinic,” she said.

They met a patient who was smoking. She remembers they had quite a reaction when he exhaled smoke through a hole in his throat.

“I said ‘See what tobacco does for you’.”

She also took the students to small debts courts, with help from David, her businessman husband, to let them see what happens when a person doesn’t think about financial common sense.

“Everything like that, to let them know that the world is not an easy place,” Paterson explained. “You have to be prepared. And you have to think, really think.”

The lessons she passed on to the students came from her mother who was well educated and insisted that Dorscie was as well.

Paterson went to UBC in adulthood.

“My husband was annoyed because he wanted to go fishing,” she chuckled.

Paterson’s daughter continued the tradition, earning several degrees and trying her hand at teaching, too.

No one gets through this thing called life without some pain. Sometimes it starts early.

She would have been about five when her parents packed up and the three headed west from Central Canada.

“Originally my mother and father were on their way out to the West Coast, because my mother didn’t produce enough red blood cells, and they figured the weather here would be easier.”

They stopped in Saskatchewan to visit her father’s brother who had a grocery store.

Her dad had an appendicitis attack “and they didn’t get him to the hospital in time, and he died.”

Her mom and little Dorscie continued on to the Coast, staying at the boarding house of a kind woman for a time.

When her father’s estate was finally settled, her mom took the money and purchased land on the North Shore and built a store with accommodations behind it.

“And that’s where I was raised,” she said.

The store became a place where Dorscie could see her mom live her beliefs.

“When you see a need you have to do something about it,” her mom would tell her.

Young Dorscie recalled seeing her mom quietly shepherd the occasional woman into the back of the shop to share a cup of tea and the ‘woman’s troubles.’

“Then, when the minister came around, she’d say ‘You’d better go take a look at Mrs. So and So.’

“If you see something that’s not right and you’re not happy, you must do something about it,” Paterson said.

Paterson has outlived her husband and son, as well as many others in her life. And her 104th birthday was spent in a wheelchair – as she recovered from a broken leg that required a protracted hospital stay. The health crisis had those who know her fearing for her future. She’s since graduated to a walker and still has an enviable social calendar.

Friends stop by the Cedar Hill, a residential care facility near Langley Memorial Hospital where she now lives, for visits or to take her on outings.

Paterson remains committed to the lessons instilled in her by her mom: “Whatever comes tomorrow, fine, great. Do it now. Don’t doddle along.” 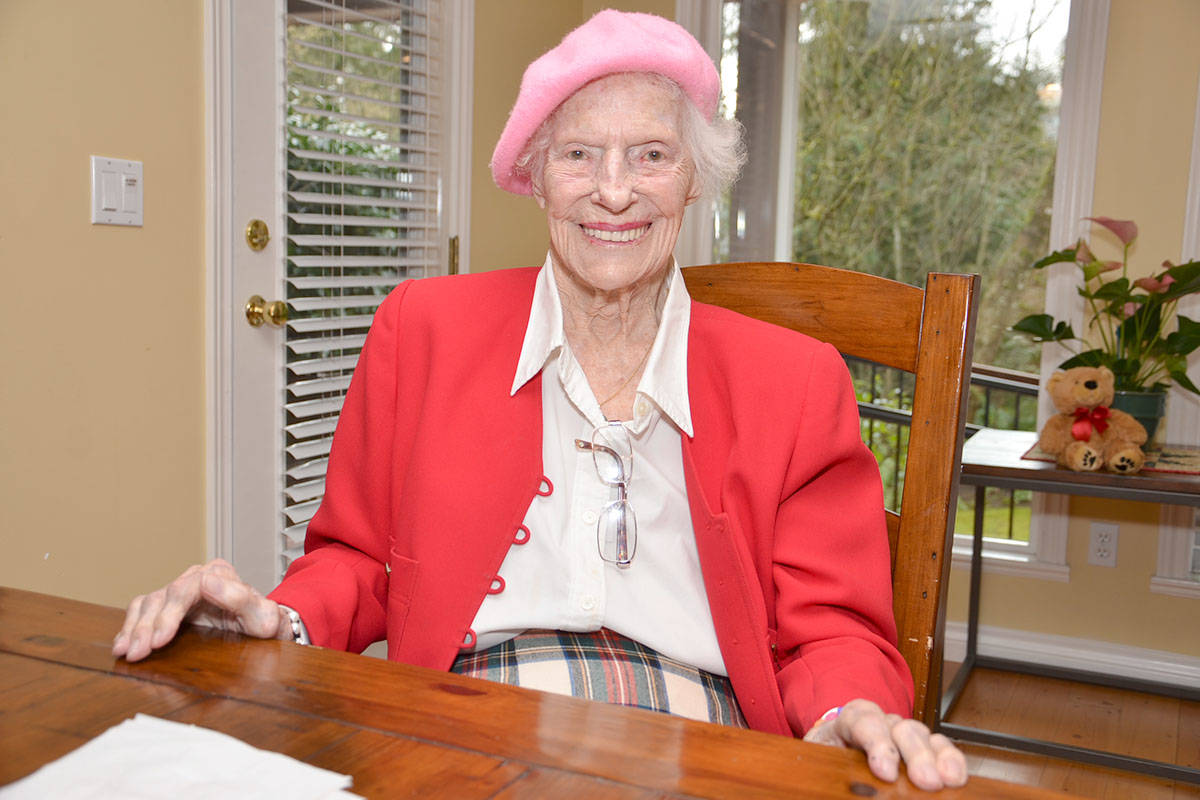 Dorscie Paterson was born on Jan. 25, 1913. She stopped by the Langley Hospice Society board office Jan. 18 to visit and sat down with the Langley Advance to talk about being 105 years of age. (Heather Colpitts/Langley Advance)