Some Trinity Western University music students have created choir compositions with COVID-19-related themes that were performed and conducted, despite the pandemic, by going online.

After in-person performances were cancelled and her classes moved online in the middle of March, Thiessen moved home to Calgary, to complete the remainder of her semester.

This summer, she learned how to build a computer with help from her father. Her first project was to power up a home studio.

Thiessen’s virtual choir project first began as a response to the pain and confusion of this past year.

“The turmoil of death, loss, social injustice and division has left so many people broken, hurting and alone, especially in the past several months,” she said. “I wanted to share a message of hope and solace.”

Thiessen chose the Passion Prayer as the inspiration for her choral project. Sung in Latin, it translates to “Lord Father: Open our hearts so that we may know, by Christ’s death on the cross, that we are made free in your glory.”

The virtual choir came together without the singers ever having a single group practice.

With everyone socially distanced, Thiessen replicated the roles of a conductor and accompanist. “In order for a virtual choir to be well-organized, they need a common accompaniment to sing to. As a pianist, I played and recorded a reduction of all the parts, and then filmed myself conducting along with the accompaniment, so the singers also had visual cues for breaths and pauses.”

Singers recorded themselves and sent their audio files to her, which she layered on the other audio files, edited, and mixed.

“The signers were so expressive in their recordings and followed the conducting video so well that I hardly had to do any correction editing at all.”

Colin Jamieson was out running at one of his favourite locations, when inspiration dawned.

“The pandemic had hit just a couple weeks prior, and I felt called to write something that would shine through the incredibly dark forest we now found ourselves in,” Jamieson said, remembering how his virtual choir project began.

The project came together over a period of several months and involved 20 singers internationally dispersed in Canada, the U.S., and as far as Qatar.

Jamieson studied and reflected upon the book of Psalms until, finally, he settled on a “relatively underrepresented” chapter.

He chose Psalm 16 to be the text for his choral piece. It is a prayer referred to as a miktam of David.

“The word miktam is relatively unknown, it seems, as it only appears in Psalm 16 and 56-60,” Jamieson said.

Although the meaning of term miktam is somewhat mysterious, the themes within Psalm 16 are universal. “It is safe to assume that the text reflects a perspective of a people who sought God’s protection and salvation,” said Jamieson.

“In its simplest musical form, ‘Psalm 16’ is a rejoiceful and uplifting work that robustly announces God’s glory through congregation-like harmony throughout the choir.”

Jamieson credits the musical community who helped bring his composition to life, “If not for my own community of Christian singers, this project would never have been possible.”

The ending of the work, Jamieson noted, is the most introspective of all.

“What begins as a plea, ‘keep us safe,’ becomes more confident as the section progresses, demonstrating our tendency to falter,” he said. “However, the very end shows that no matter how far we may stray, God is always there.” 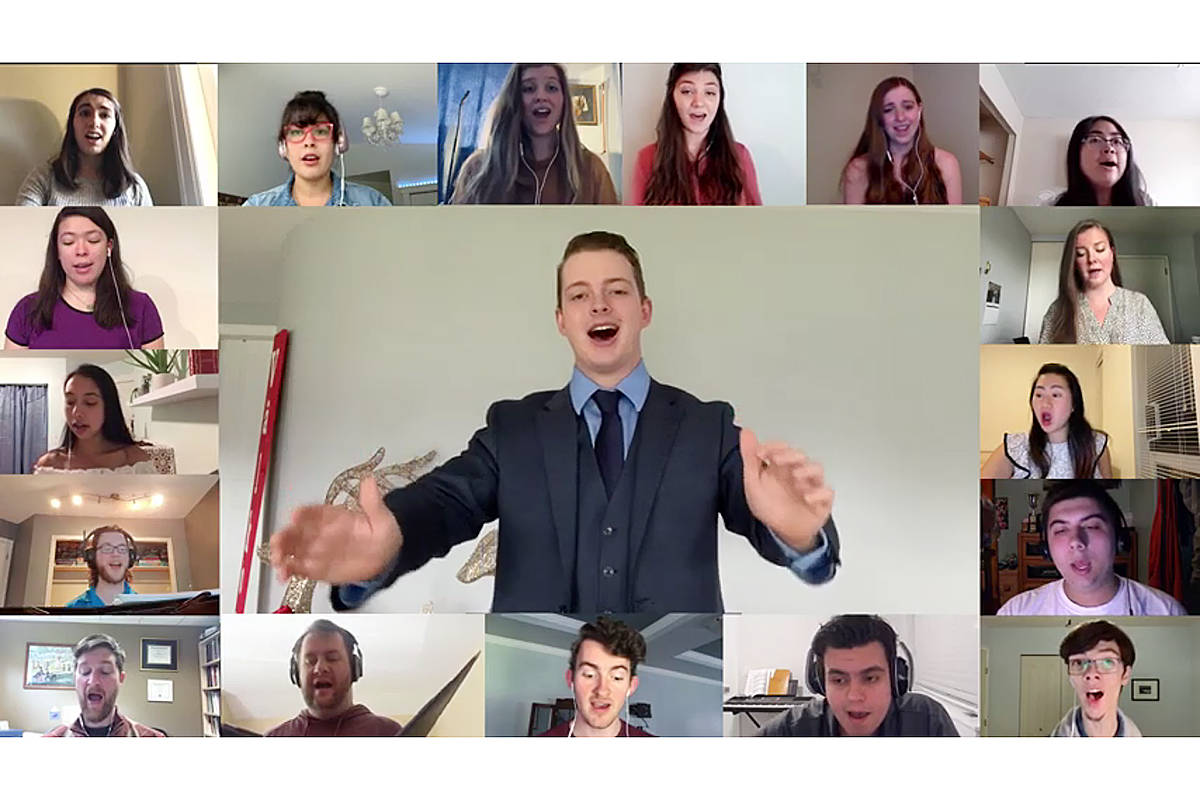 Trinity Western University music major Colin Jamieson conducted an online performance of his choir composition, with singers as far away as Qatar. It was posted online at www.twu.ca on Wednesday, Dec. 23, 2020 (Video clip)

LETTERS TO SANTA3: How are you and Mrs. Claus, Langley kids ask

Where to retire your Christmas tree in Langley