Five churches, hundreds of spectators and the Wagner Hills Farm Society collaborated again on Good Friday this year, to present 10 Stations of the Cross.

Fort Langley’s churches each took a turn to host Bible readings and worship music played from a trailer-stage that was led by a tractor and followed by spectators, along with those willing to carry a life-size cross through the village from station to station.

The event began at Station 1, where Jesus Enters Jerusalem was read at Fort Langley Community Hall at 10 a.m. Hundreds were gathered from throughout the Lower Mainland.

“This event is so that you might deepen in your understanding of what the cross means; that symbol of our faith and the journey to it, as we open up to the hope of resurrection,” said Minister Hilde Seal from United Churches of Langley.

At each station, more spectators became participants, joining the procession.

One of the first volunteers to carry the cross was 33-year-old Christopher Kowalski.

“I gave my life to Jesus a couple of weeks ago, really,” Kowalski said. “This event is in celebration of that – my faith.”

Kowalski – who relocated to Vancouver for work four years ago – “slipped up” in October. His mother begged him to attend Wagner Hills one-year addictions rehabilitation program.

“I used to be involved in the drug world,” Kowalski recounted. “After I went back to it, I was literally ready to die – so it’s a good thing that I came.”

Initially, Kowalski promised his mother he would only stay at Wagner Hills for 30 days. But now, after three months, Kowalski is a sober man with a renewed sense of purpose and hope.

He intends to stay for the full year and work intermittently, if possible during his stay at Wagner Hills.

Since its inception, Wagner Hills has seen more than 5,000 men and women access the ministry. Their women’s campus is located in South Langley.

“You think that for men of our backgrounds, living together would be utter chaos, but it really isn’t – we’re like a big family,” shared another recovery program member, Austin Hood.

Hood travelled from Alberta to access the centre’s recovery services after abruptly losing his father to a drug overdose and spiraling himself, back into drug use.

Soon after he graduates from the program, Hood wants to become a social worker for men in his very circumstances. He feels it is his “calling.”

Phil Butcher, of Langley, graduated from the program last month, but has since relapsed.

Butcher admitted: “It is a bittersweet moment when you graduate, to leave the community you’re in” at the farm.

Three weeks ago, he returned to the centre and the farm.

Mid-way through the event, at Stations 5 and 6, spectators gathered atop the grass in Fort Langley’s cemetery.

Additional stations were hosted by Fraser Point Church, United Churches of Langley, the Parish of St. George – an Anglican Church of Canada, and Living Waters Church.

The procession concluded just after noon with Station 10, with The Empty Tomb, inside Fort Langley Evangelical Free Church.

A member of Living Waters Church, who wishes to remain anonymous, says that watching the Wagner Hills men gather together in the cemetery for worship reminded her “a bit of the story of Easter, the hope that comes” following the resurrection of Jesus Christ, which resulted in an empty tomb.

“I find it very moving because you know what struggles they are going through and are probably still in the midst of,” she finished. 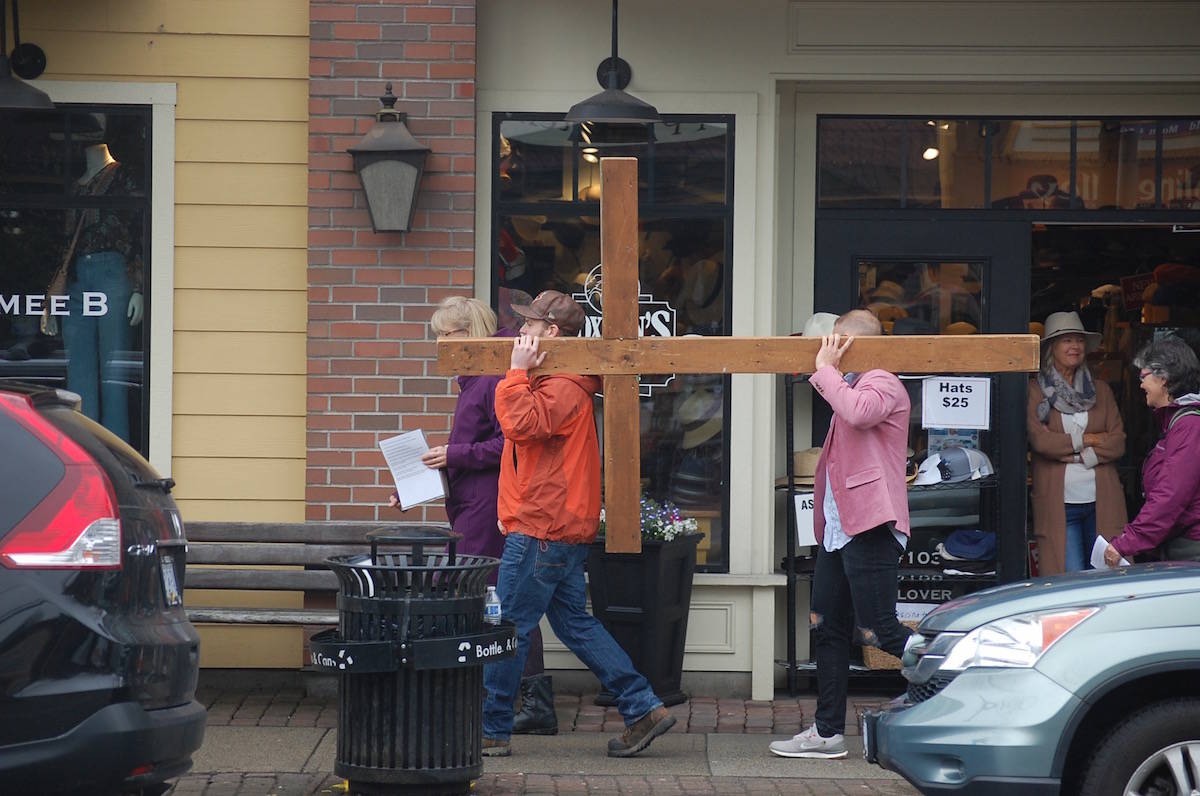 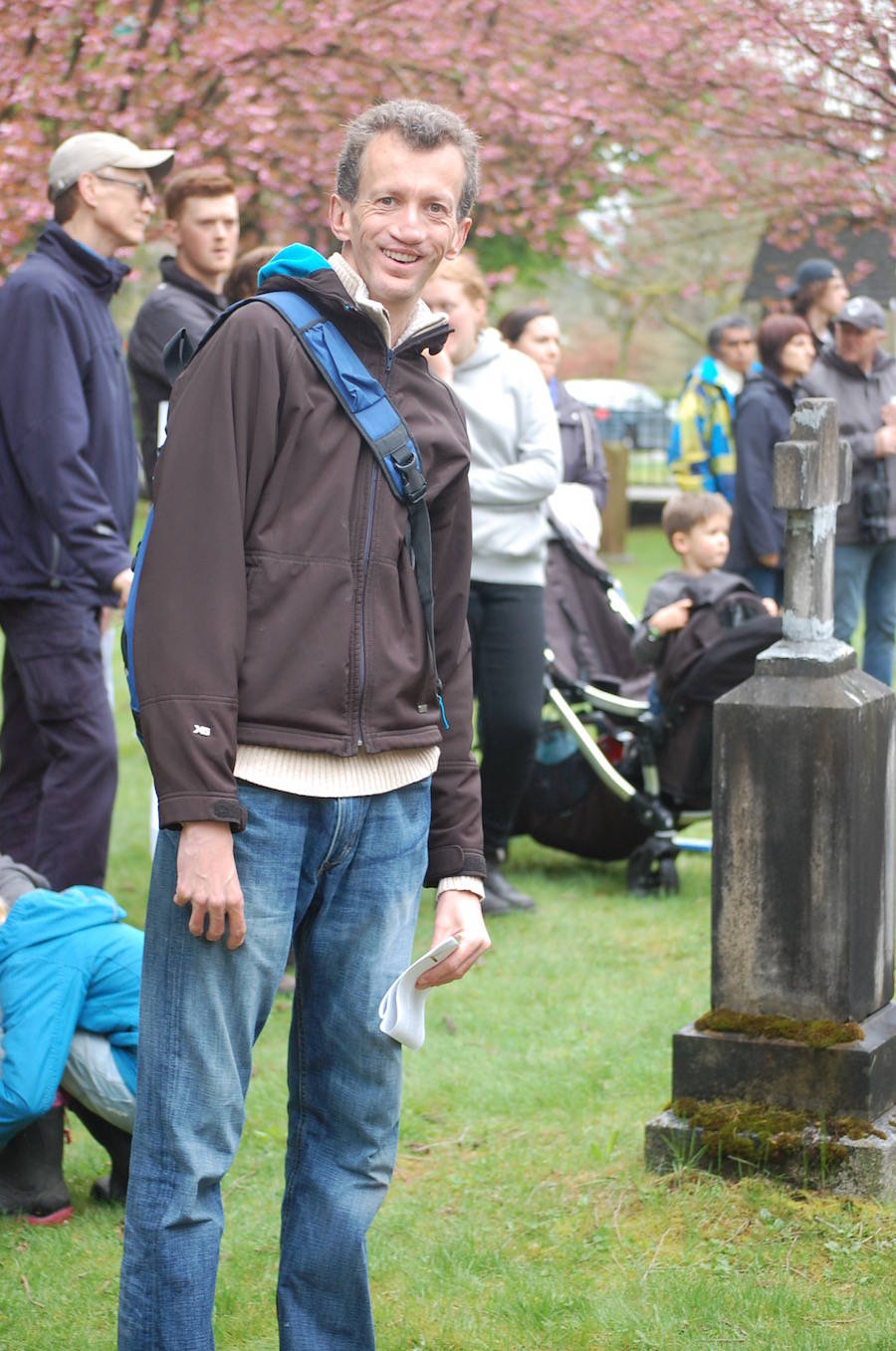 Phil Butcher, of Langley, graduated from the program last month but is currently back in the centre. (Sarah Grochowski photo) 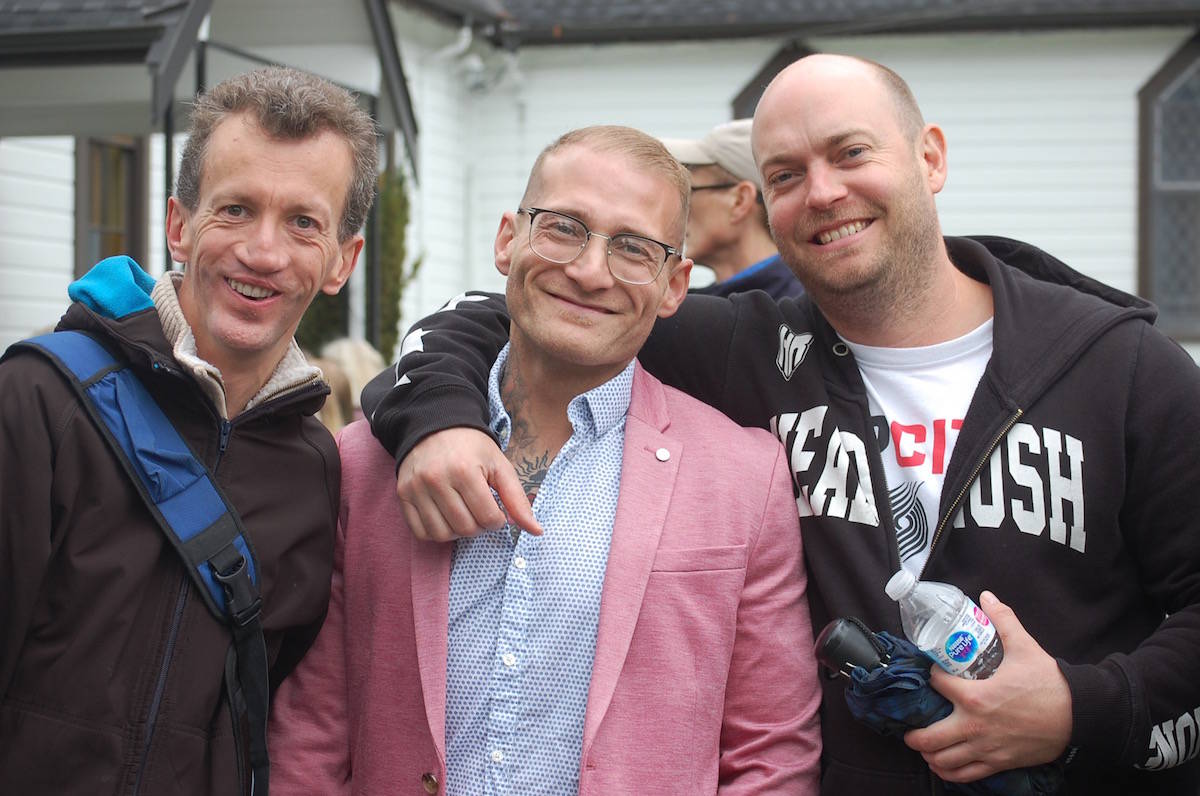 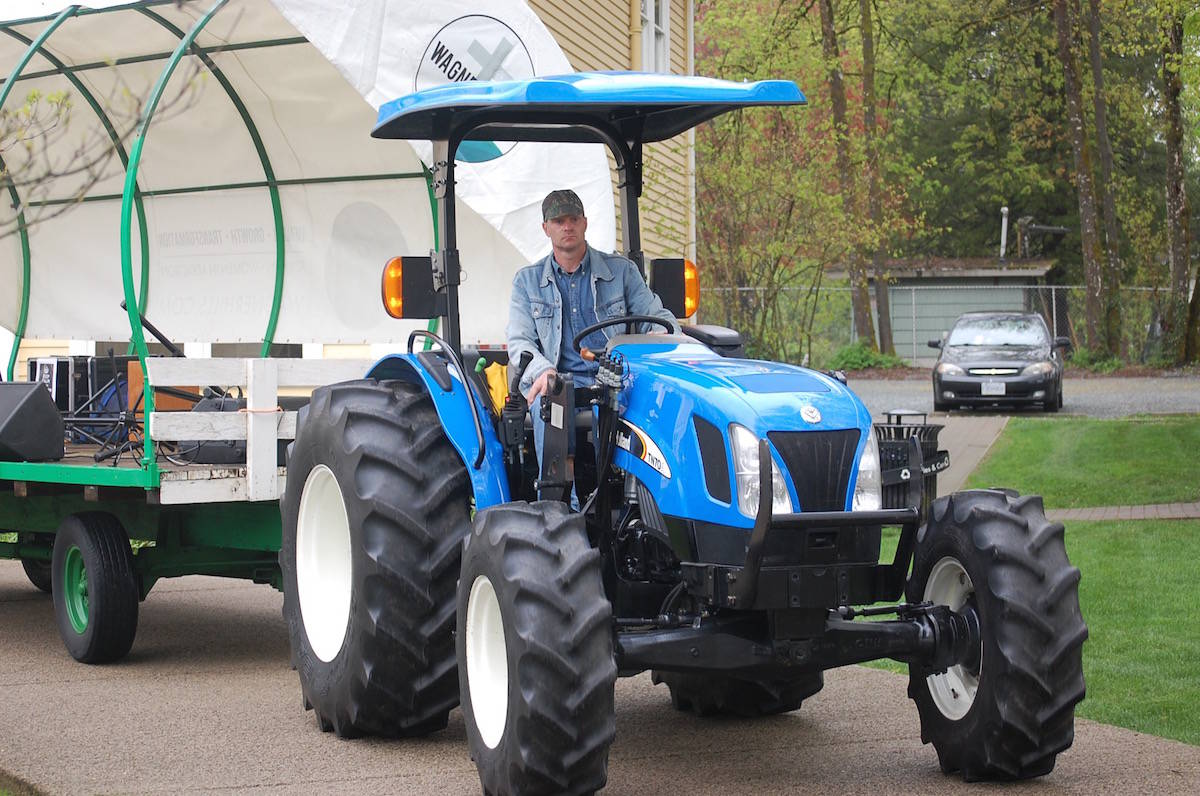 Fort Langley’s churches each took a turn to host Bible readings and worship music played from a trailer-stage that was led by a tractor. (Sarah Grochowski photo) 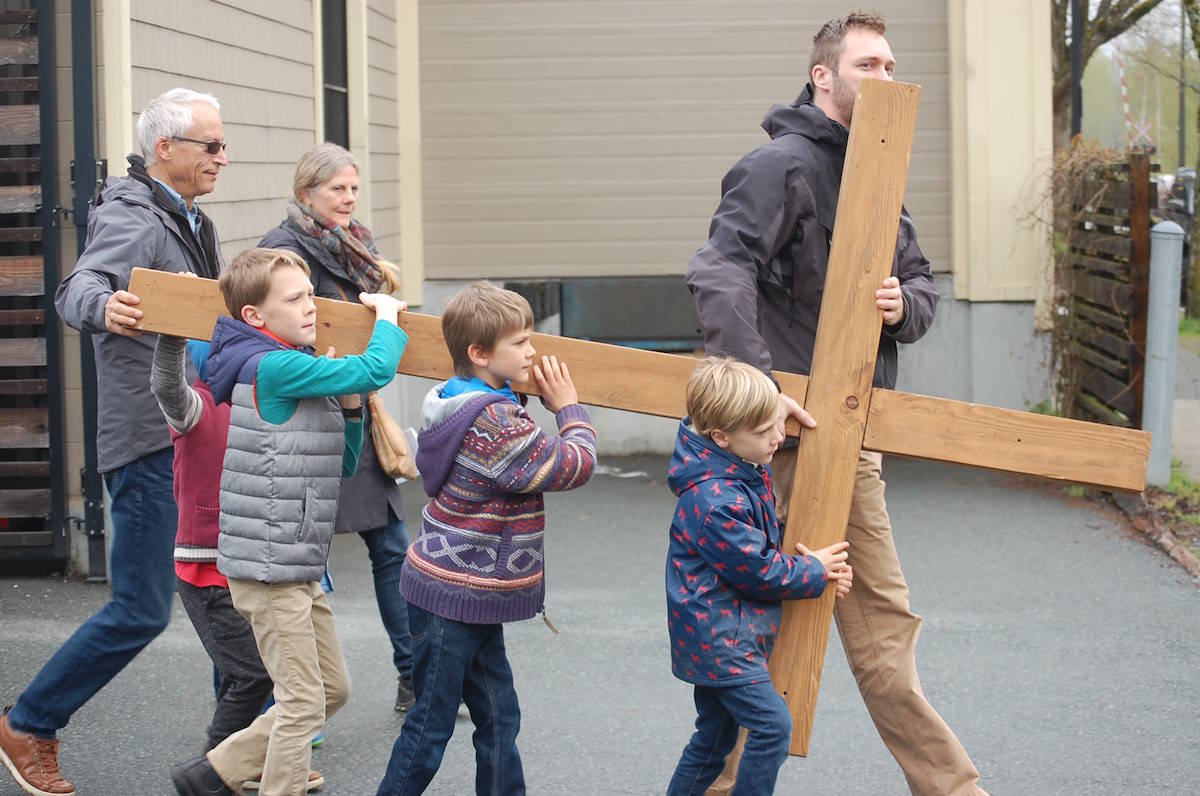 Spectators young and old carried a life-size cross through the village from station to station in Fort Langley on Friday. (Sarah Grochowski photo) 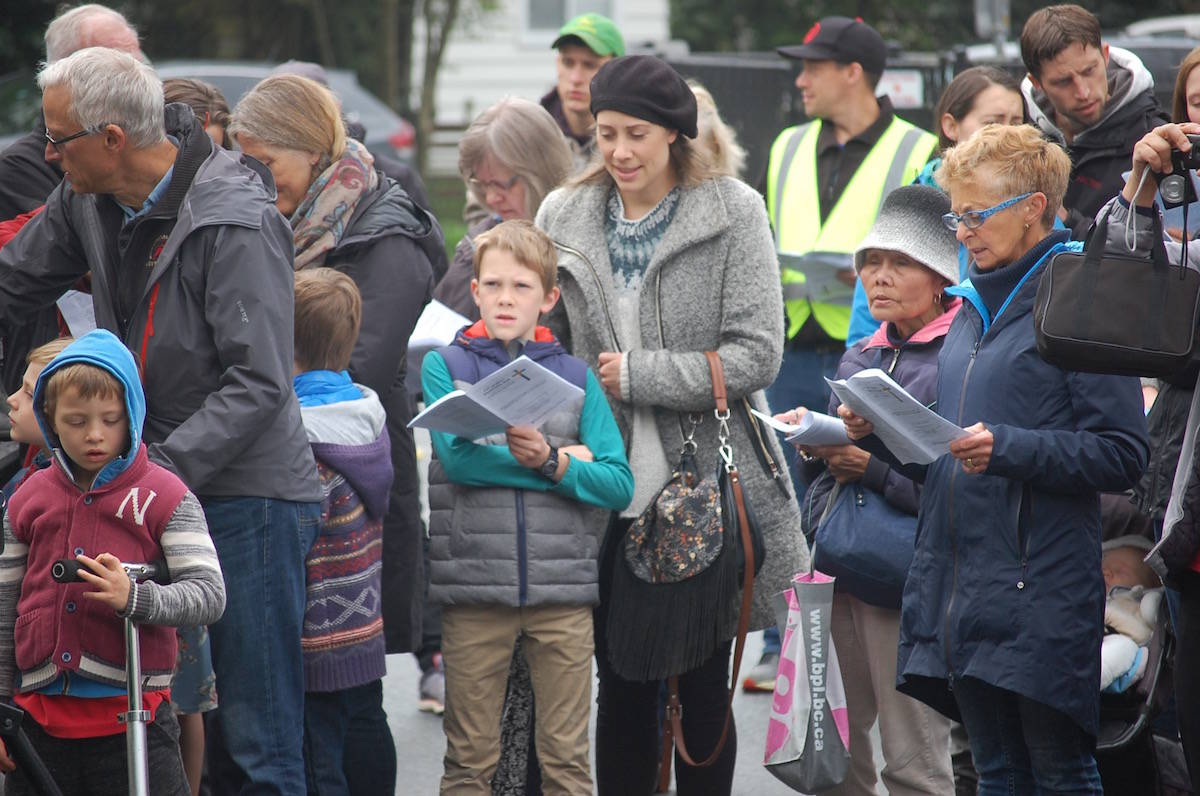 Soroptimists assert power of the purse

PHOTOS: Aldergrove Easter party a treat for children in the community