Gabriel’s project is a second version of a mural he had previously painted in Fort Langley in 2006 for Jasmine Marjanovic, owner of Cranberries Naturally.

The 2006 mural depicted Indigenous culture and was painted on the walls of Fort Langley’s Gasoline Alley, but was painted over in 2017 by property owner and developer Eric Woodward.

Now that Cranberries Naturally is moving into a new location at 9124 Glover Rd., Marjanovic commissioned Gabriel once again to create an updated version of the previous mural.

“I was just out of arts school at Emily Carr University and eager to showcase my talent to the world. I really filled that space with a lot of content,” Gabriel explained of the early mural.

“This new piece is much smaller than the original, however, I still think I’m able to pull off this image of indigeneity, and integrate it into this new business frontage.”

Gabriel painted the mural on panels, which were installed on the interior walls of Cranberries Naturally on Sunday, Jan. 20.

“This is quite a bit different endeavor because it’s an interior retail space meaning there’s already quality finishing on the inside of the building, so my challenge is taking this piece and putting it on smaller panels and re-installing it on the site afterwards,” said Gabriel.

Gabriel explained that Fort Langley is a significant space for First Nations people because it’s where the proclamation of British Columbia was signed.

“As far as I know, when that proclamation was signed it was done in protest by the Kwantlen people and many Coast Salish nations who live along the Fraser River today. So there’s a history of conflict with it. There’s still this ongoing narrative taking place between the new settlers in this region and the Indigenous people.”

The purpose of the mural is to offer a more Indigenous feel to Fort Langley, and to showcase Coast Salish culture.

Fort Langley is a significant space for First Nations people, because it’s where the proclamation of British Columbia was signed, Gabriel said, explaining the motivation behind his piece.

As he’s gleaned from history, the proclamation was not welcomed by his Kwantlen ancestors and the Coast Salish communities who still live along the Fraser River today.

“So there’s a history of conflict with it,” he said.

“There’s still this ongoing narrative taking place between the new settlers in this region and the Indigenous people,” Gabriel elaborated.

The purpose of his mural is to incorporate a more Indigenous feel to Fort Langley, and to showcase the Coast Salish culture. Scanning the finished product, he believes he’s achieved that.

Marjanovic moved her storefront from the long-time Gasoline Alley location to the new Glover Road location when the “opportunity presented itself.”

And incorporating Gabriel’s new mural as part of her new store was imperative for Marjanovic.

She loves that Gabriel’s art “represents where this community started, how it started, and how it should continue to be.”

“This piece in particular is fantastic for so many reasons. History is history and you always have to think about why you’re here.”

This time around, Marjanovic explained, Gabriel painted the mural on 16 panels so that “nobody will be able to mess with the art.”

“If I ever sell this building or move, [the art] will be donated to the museum,” she concluded. 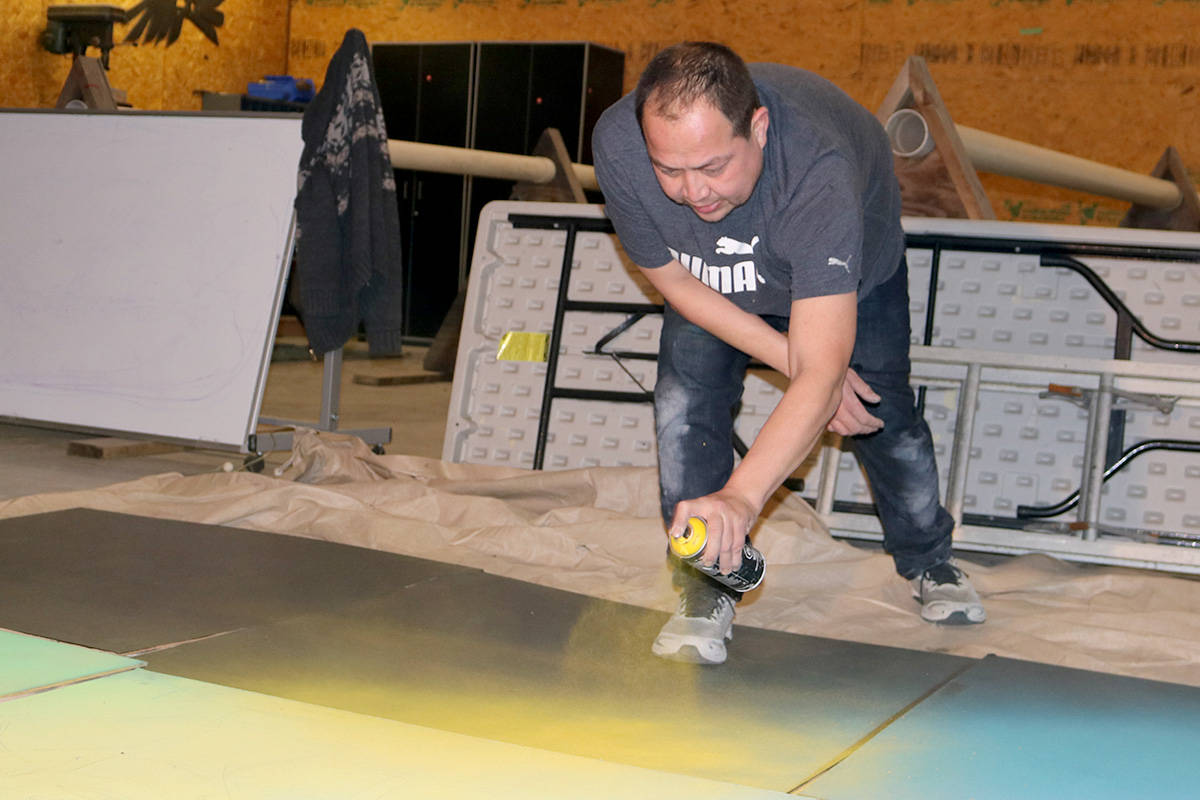 Brandon Gabriel was hard at work painted the base colours of the mural that is now hung up at the new location of Cranberries Naturally. Miranda Fatur Black Press Media

VIDEO: Fort Langley was celebrating cultural diversity before it was ‘populaire’