John Kromhoff usually doesn’t do dessert, but he will make an exception sometimes.

“I don’t eat many sweets, but when it comes to a special occasion, I throw the rules out the window,” Kromhoff chuckled.

Turning 100 was one of those special occasions.

On June 24, Kromhoff allowed himself to sample some small cakes shaped like planets, part of an “out of this world” NASA-themed celebration at the Chartwell Langley Gardens care residence in Walnut Grove where he is known for his interest in technology.

There was even an astronaut, who dropped by to give a hug.

As well, several police officers and firefighters dropped by to pay their respects and surprise Kromhoff with an inside look at one of the patrol vehicles.

Because of COVID-19 restrictions, he wasn’t able to have a lot of guests, a fact that led his family to make a public call for people to send birthday cards.

Kromhoff had made his peace with a scaled-down birthday celebration during the pandemic, and limits on gatherings that would keep him from seeing all of his children, their spouses, and his grandchildren and great-children at one time, all 54 of them.

When his family issued an invitation on social media and through the Langley Advance Times to have people mail birthday cards, he didn’t expect he would receive many, and was delighted to be proven wrong.

So far, more than 1,600 cards have landed, and a week after his birthday, a few were still coming in, around 10 a day.

In addition to cards and messages from students at local schools and area residents, he’s seen mail from as far away as Europe and parts of the U.S., including Alaska, California and Texas.

Some local gymnasts were among those who responded, creating more than 70 handmade cards, decorated with happy birthday messages.

Sherri Taylor of Flip City Gymnastics Club, said the young athletes at the Langley club were moved by his story to create a wide variety of cards that she dropped off at his residence.

“It is all about giving back to the community we live in,” Taylor said.

After throwing out the rules for his birthday, Kromhoff intends to resume his no-sweets policy in a bid to get “a few more years in.”

“I’m going to be very careful with the health stuff,” Kromhoff asserted. 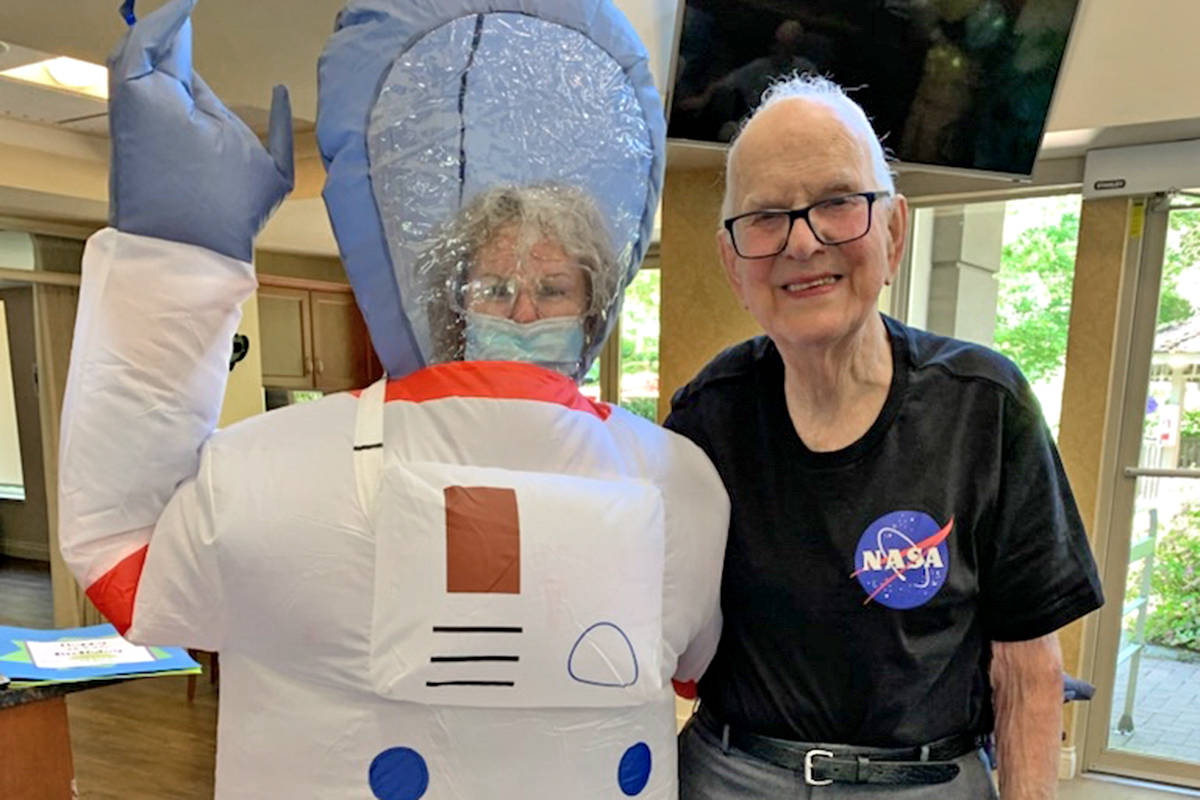 Langley’s John Kromhoff turned 100 on June 24 with a NASA-themed birthday that included an astronaut. (Special to Langley Advance Times) 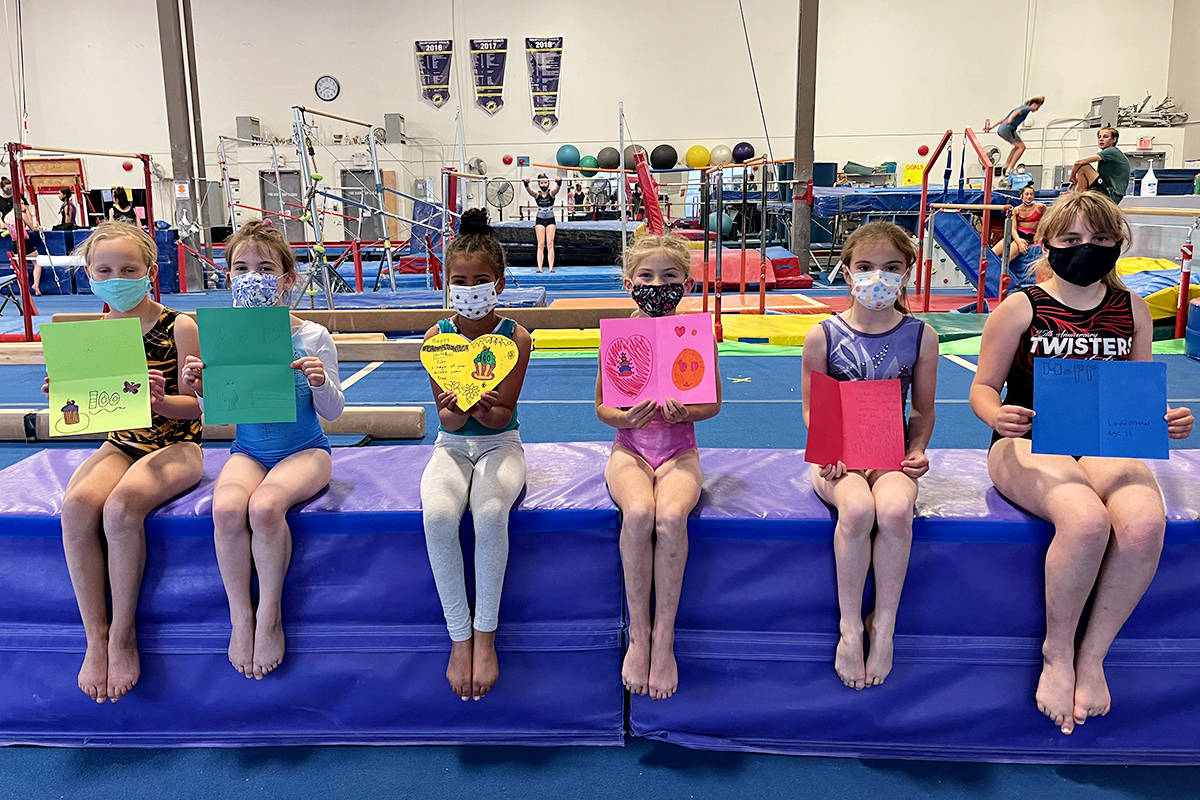 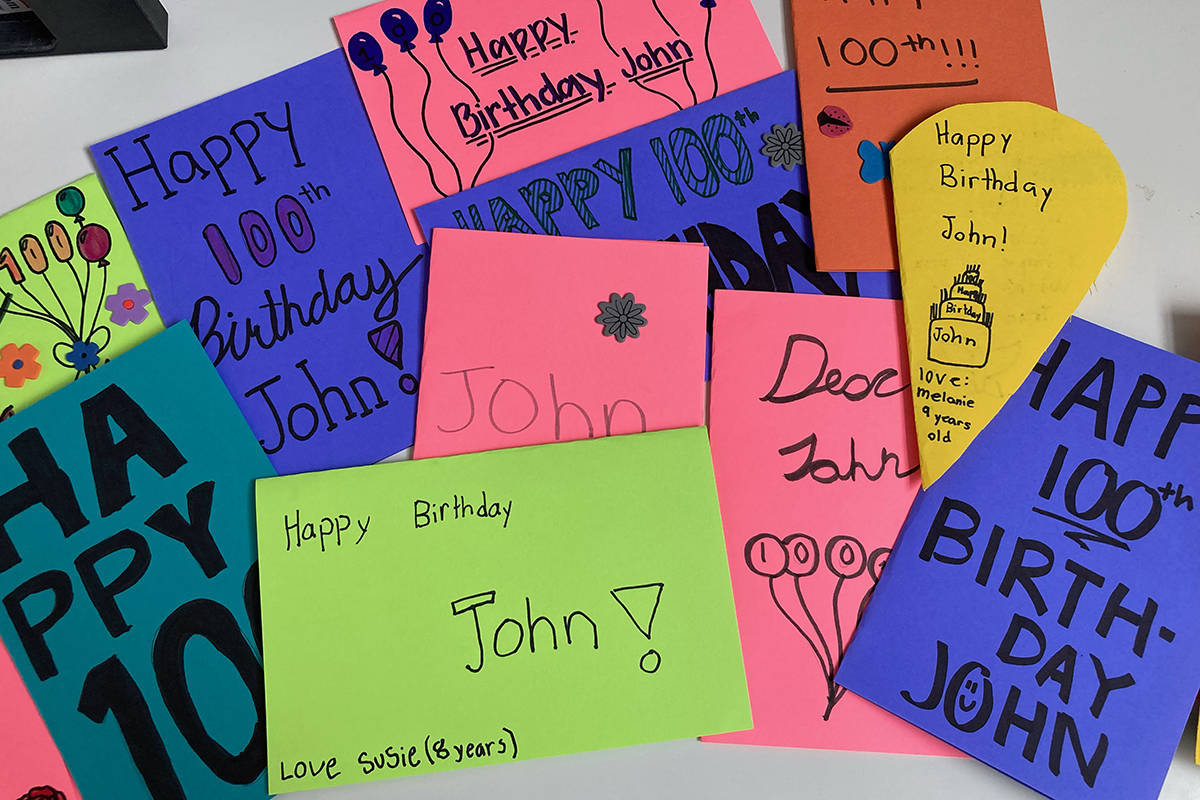 Some of the handmade cards created by young Flip City gymnasts in Langley for John Kromhoff, who turned 100 on June 24.(Special to Langley Advance Times)