If politics is bloodsport, it sure wasn’t on display at the Cloverdale-Langley City all-candidates meeting Sept. 25.

The candidates answered a series of questions in a congenial atmosphere that reflected an evening tea, rather than toe-to-toe fisticuffs.

Hosted by the Cloverdale District Chamber of Commerce, about 100 people attended the event held at KPU-Cloverdale.

In their opening statements, Nutbrown said he’s running for the Greens because he wants to have a family in the future and he doesn’t know if he should because of the state of the world. Youth are “experiencing anxiety and depression, lots of different mental health issues, because they are uncertain about the future,” the 29-year-old said.

Aldag said “it’s been a true privilege to listen to voices and have conversations on the door steps and in the coffee shops of this community for about 6 years now. I’ve been able to take those priorities and fight for them, and advocate for them, in Ottawa.”

Banwarie said he “decided to run because he wanted to represent the people of Cloverdale.” He sees significant issues that need to be addressed, from crime, which is huge in Surrey, he said, to families not being able to make ends meet, to the opioid crisis, to the issues of climate change and pollution.

Jansen said she’s a local, born and raised and wants to represent the locals. She said her and her husband used to own a farm that employed 200 people. She said because of that, she knows budgeting and how to make payroll. “I’ve employed many people over the years and you learn what real people really need. What are their concerns? I want to represent you as regular people in Ottawa.”

Rebecca Smith, the new president of the Chamber, moderated the Q&A. The questions were compiled by the Chamber from submissions they received. Candidates were limited to one-minute responses.

The first question was about what candidates would do to ease some of the burden surrounding the mortgage stress test.

Regarding the needs of seniors, Banwarie said he supports adding dental coverage, and other medical coverage to MSP for seniors.

John Aldag on how to regulate budding health problems that are growing out of cannabis legalization pic.twitter.com/uj2rLGVw9h

On the topic of immigration, Aldag said he wants to change the narrative surrounding immigration, illegal immigration, and refugees. “We need to lead by example. There are millions of refugees around the world. We need to look at how we bring some of them here.”

Jansen added, “We need to close the loophole of the safe-third country agreement.” She also said Canada needs to increase the availability of private sponsorship, noting that Canada has had success with that program. Jansen said her family has privately sponsored a family in the past and the sponsored family is now living a successful life here.

Banwarie said the mindset of Canadians needs to change. “I’m an immigrant. We have to make Canada a place where they are respected, where they are accepted, and where their training is recognized.”

Banwarie: the two most important issues for this riding are affordability and safety pic.twitter.com/JJ0FrIdzE0

On Marijauna, Nutbrown said plants for personal use, should be allowed to be grown outside in people’s yards. This would alleviate mould and health concerns arising from indoor growth.

Jansen commented that the carbon tax isn’t doing anything for the environment. “We’ve had a carbon tax for 10 years and our emissions are going up. All a carbon tax does is make life less affordable for you. The Conservatives support green technology.” She said the Conservatives would invest in green-tech and share those innovations around the world. “We can actually have a global impact on carbon emissions.”

The candidates were asked what they thought were the most important issues facing residents in Cloverdale-Langley City.

Nutbrown said they were affordability, electoral reform, tax reform (close tax havens), poverty, universal basic income, and climate.“We have 18 months to act. And (we have) 11 years to actually do something to save our children’s futures. That is what we’re fighting for. This is the greatest crisis the human species will ever face. It’s larger than the World War II crisis.”

On the legalization of drugs, Nutbrown said, “We support the decriminalization of all drugs. We need to stabilize drug users lives. We need to help people and move past the stigma of addictions.”

Aldag said decriminalization has benefits. “I’ve been to DTES and seen the positive work that safe treatment and addiction facilities have provided.”

The candidates were asked what guarantees and resources they would provide veterans. Jansen said Conservatives will clear the backlog, add a reliable pension system, and make sure vets are guided through rough waters. Aldag said Canadians owe vets a debt of gratitude and said the Liberals will open a PTSD centre and work harder to support vets. Nutbrown said Greens will put in universal basic income so vets who can’t work won’t fall through the cracks. And Banwarie said previous governments have kicked vets to the curb. “We’ve got to do a heckuva lot better. We need to rewrite the veterans charter pre-2006.”

In closing, all the candidates said they support small business, with Banwarie, Aldag and Jansen all committing to bring in better regulations to help small businesses, while Nutbrown said the Greens would “tax big companies and large corporations and reinvest that in the economy.”

Afterwards, the candidates all made themselves available for short chats with the media, with the exception of Jansen, who refused, saying her PR handler would liaise. But, as of publication, Jansen’s office had not returned calls, messages, or verbal requests for a short interview.

Jansen has not talked to media since Sept. 19 when a story broke about Dutch Christmas celebrations on one of her farms where some participants appeared in blackface. 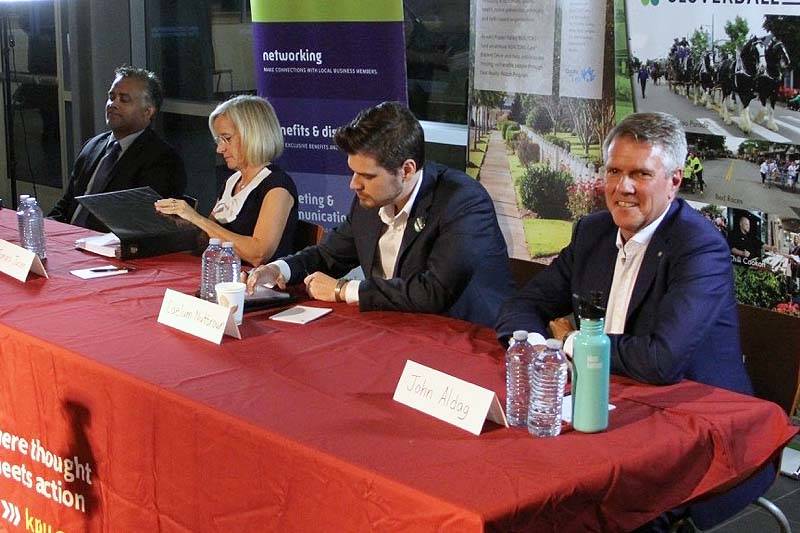 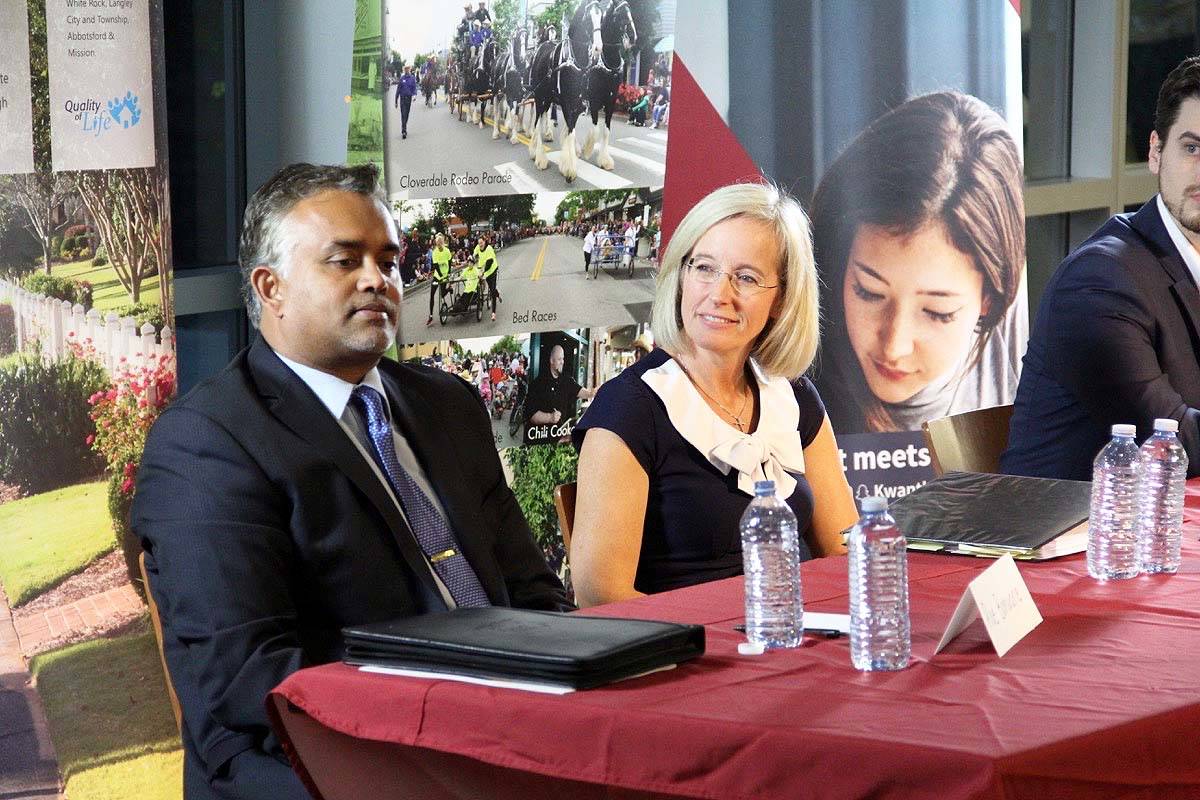 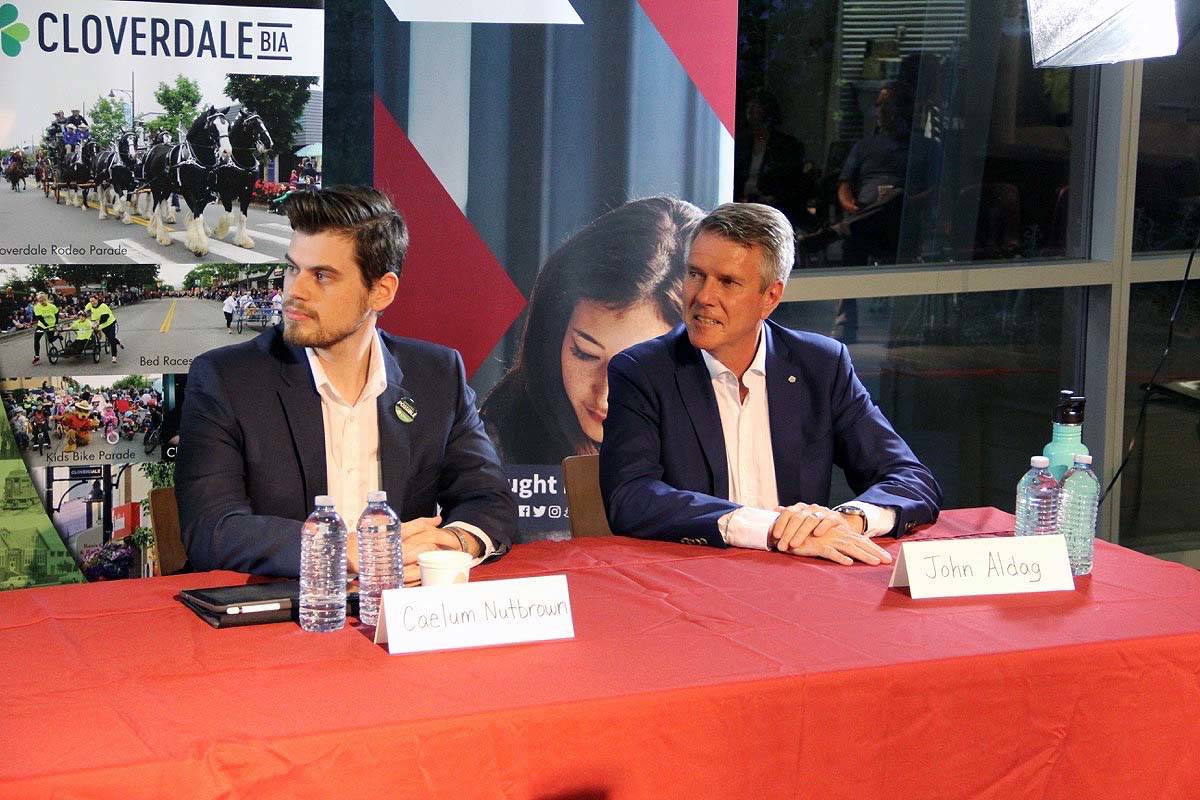