Peninsula-based actor and stuntman Darcy Hinds is on familiar territory in his current recurring role on The CW and Netflix’s Riverdale.

As Randy Van Ronson in the hit show – a re-imagining of the world of the old Archie comics, in which dramas of romance, school and family conflict now veer into dark mysteries – Hinds is required to step into the boxing ring with Archie Andrews (played by series lead K.J. Apa).

Randy (also a character in the comic book Katy Keen) won his first fight with Archie in a recent episode. An upcoming episode (to be aired April 3 on The CW and April 4 on Netflix) will see them return to the ring.

It’s definitely in the comfort zone for Hinds, who in his earlier boxing career represented Canada in more than 140 bouts throughout North America, winning multiple titles along the way. Those skills not only helped him secure the role of Randy, but also promoted him to boxing stunt co-ordinator for the series.

For the Vancouver-born player, who grew up in White Rock and South Surrey (he was also a volunteer White Rock firefighter for five years), acting and stunt work were a natural, logical outgrowth of his fighting career.

“How will you make a living?” she wanted to know.

“I didn’t know either, at the time,” Hinds reflected in a recent promotional interview. “But I knew it was my passion and my dream and I had to follow it.”

He still has an “amazing” fighting career to this day, he noted.

“Not the fighting I had envisioned that day in class, but fighting in film, stunts, acting and teaching.”

But he admits that appearing on screen was always part of his dreams while he was growing up.

“I’ve always known I’ve wanted to be an actor,” he said. “Especially after watching movies like Superman and seeing action actors like Bruce Lee.”

He got serious about stunt work and acting in 2008 when he first enrolled in acting lessons (he currently continues to study at White Rock’s The Drama Class).

He’s notched up more than 60 IMDb credits on such TV series as Arrow, The 100, Supernatural, iZombie, The Flash, Van Helsing and Supergirl – becoming a local personification of the industry’s newly-coined ‘stunt actor’ category.

“I’ve had many stunt/actor roles, Hinds said. “One that was very cool was on a show called Frequency where I fought Mekhi Phifer (ER, 8 Mile).”

Although his training these days may not quite be at the pitch it was when he used to train up to three times each day and sometimes fight three times in a single weekend, Hinds still keeps fit running and shadow boxing in all kinds of weather, particularly running up long stairways and hills – even the North Shore’s Grouse Grind – wearing a weighted vest, plus hand, ankle and head weights.

More evidence of his burgeoning onscreen career can be seen in an upcoming episode of the superhero series Legends of Tomorrow (airing on The CW, April 1) in which he stunt doubles as a werewolf and Mexican wrestler.

Although he brings a strong work ethic to the set, Hinds said he knows he is fortunate to have secured a firm foothold in the television industry.

“(I’m) so blessed and grateful, with so many supportive people helping along the way,” he said. 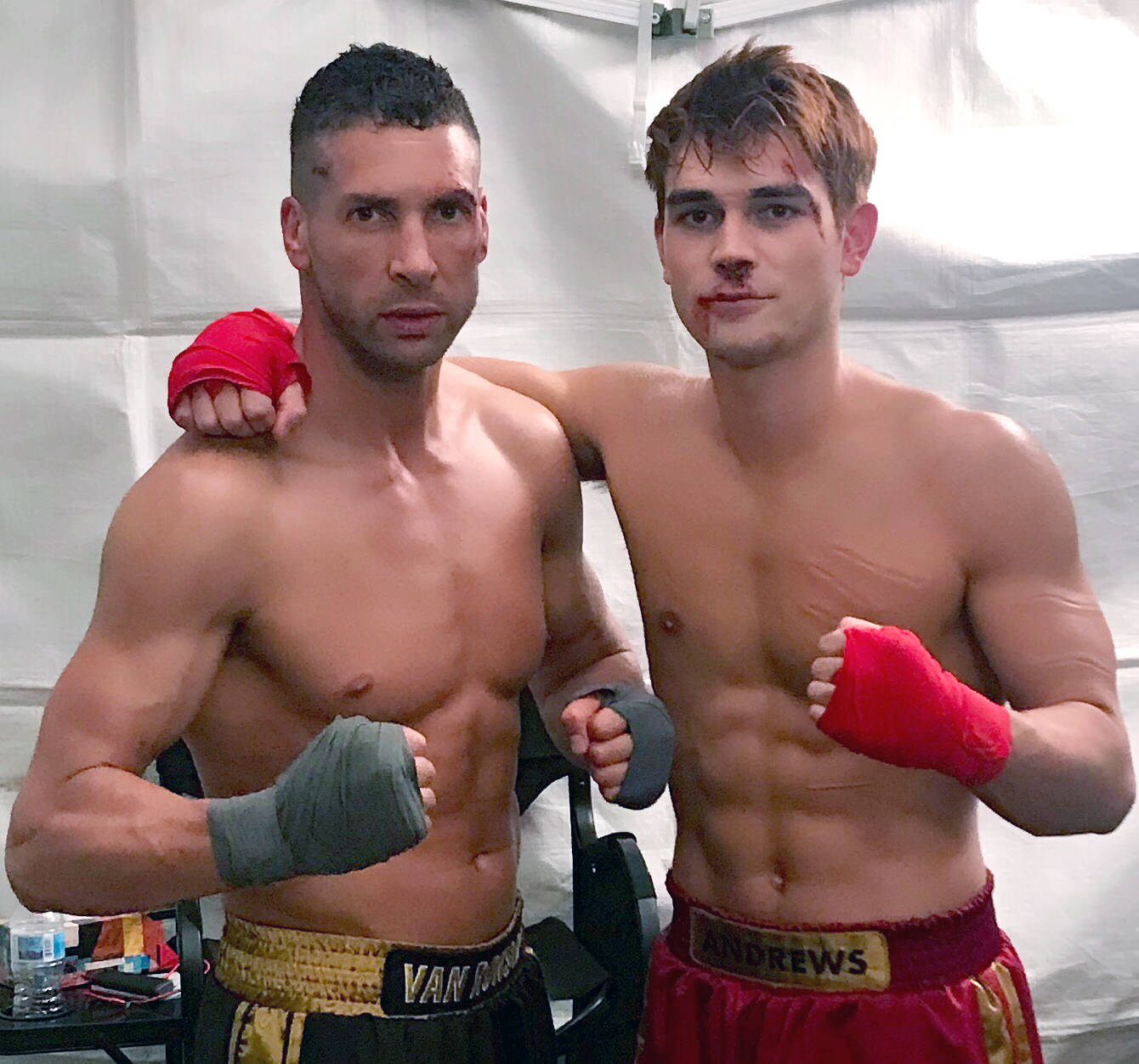 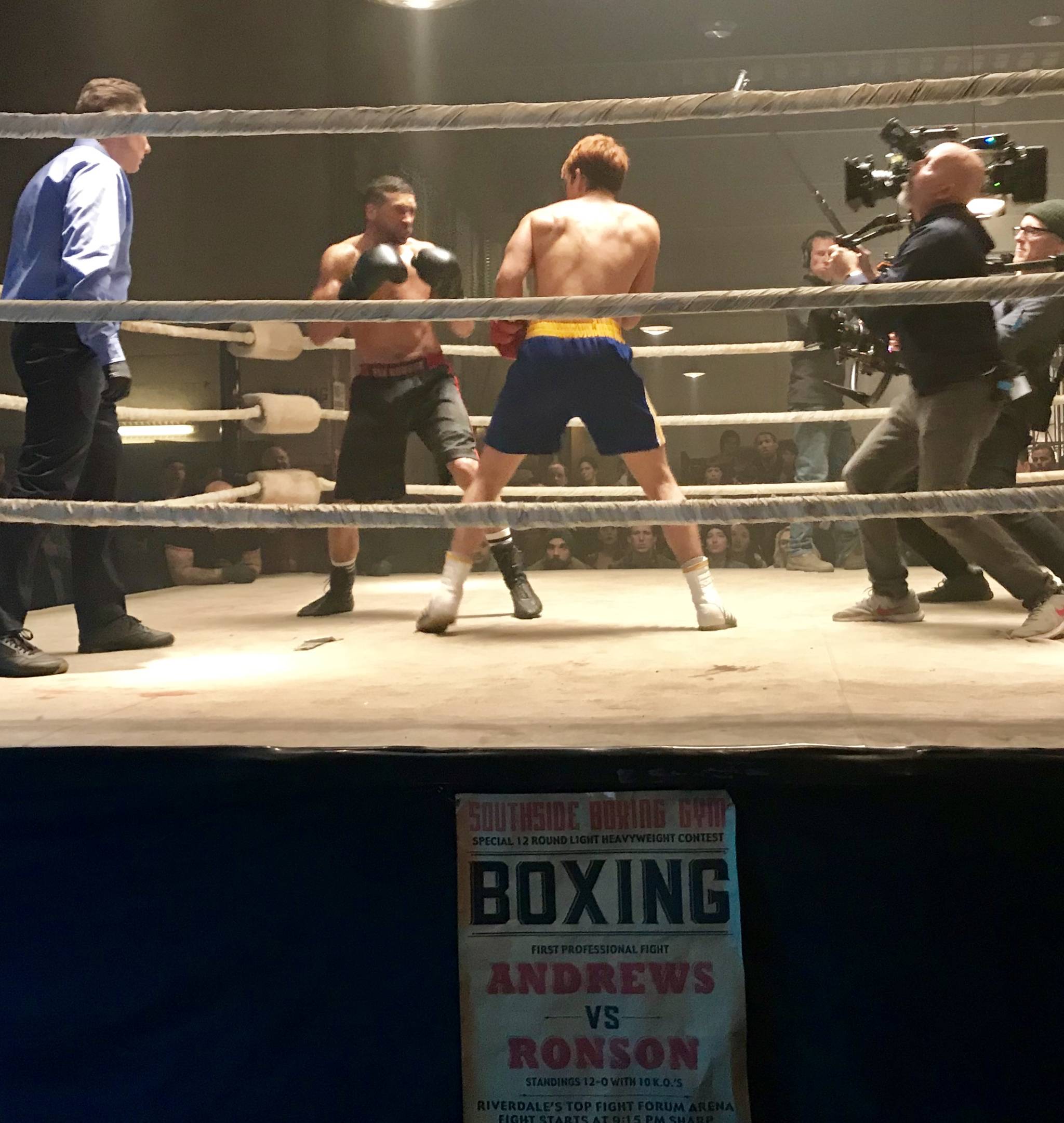 Darcy Hinds and K.J. Apa square off during shooting of a ring scene for Riverdale. (Contributed photo)