A Fraser Valley canine made her debut on the big screen this past weekend in the new movie, A Dog’s Journey.

Starting last Friday, movie-goers could catch the sentimental story of a dog who discovers his life’s “purpose” through a series of reincarnated lives where the pup rconnects with the family who first took him in.

The movie is a sequel from A Dog’s Purpose, which premiered in theatres in 2017.

During one of those lives, the dog came back as a Biewer Yorkie named Max, which was played by Abbotsford canine, Bella.

“I knew there was Max as soon as I saw Bella,” Judd said.

Judd is the founder of Canine Co-Stars of Canada Ltd. in Aldergrove, where she trains animals of all kinds for the big screen. She’s works with everything from wild boars, turtles, monkeys, wolves, and especially canines.

Judd admits she was semi-retired from feature film gigs when offered the role as animal coordinator for A Dog’s Journey.

“Author Bruce Cameron and Michon wrote the story after losing their dog. They didn’t think they could love again,” Judd explained.

“The story proves it is worth it to get another chance at loving a new dog, and that’s why I couldn’t pass it up,” she said.

Judd said the Sagert family in many ways mirrors the central family in the film.

After loosing a long-time family member – their 13-year-old golden retriever – they eventually decided to adopt Bella.

Parents Jen and Carlin even used the first film, A Dog’s Purpose, to help their kids grieve the loss of their beloved pet.

“We let them watch [the film] to help them understand what happened [to the dog] and about death,” Jen said.

In preparation for the film, Judd trained Bella extensively in Aldergrove from June until the last week of July 2018, before the two jetted off to film in Winnipeg for seven months.

Once the Sagert children, Tyson and Rylee, found out Bella was training to play Max, they couldn’t contain their joy, Judd said.

“Her character is a moody little dog who only likes who she likes,” their mother said.

“Shooting days were long. It was important that Bella had stand-ins and other dogs available to give her a break on set,” Judd elaborated.

And the character Max (played by Bella), got more screen time than any other dog, she noted.

A team of three other “look-alike” dogs acted in subsequent scenes to allow for a time of rest for Bella, said Judd, who wrangled more than 44 dogs to act as extras or stand-ins for the various canine characters that appear throughout the film.

Judd, as the animal coordinator for A Dog’s Journey, designated specific trainers for each dog that was cast. She also worked as head trainer for Bella.

The two even shared a hotel room during the seven-month span of filming, and 18-hour working days.

“They are a really nice family,” Judd explained.

“That’s why Bella was such a great puppy – they include Bella in family events, they talk to her… the more a dog is loved, the better and happier they turn out,” Judd added.

The trainer currently has six dogs on her Aldergrove property. And one of her own, Bam-Bam, acted as Bella’s double in the movie.

“There’s just something about watching dogs learn and seeing them excited when they finally get it,” Judd told the Aldergrove Star.

They are planning their third go-around for sometime this month.

Jen was admittedly surprised after wtinessing Bella open doors on the big screen.

“She loves working when she’s around Bonnie,” Jen said. “But when she’s with us she cozies in as a member of the family.”

“It was hard for all of us to let her go,”the mom said of the nine months separated from Bella.

“But now it’s pretty amazing to have a movie and memory of her for the rest of our lives, even when she is no longer with us,” Jen said.

Other notable films Judd has trained canines and other animals for include Air Bud as well as Dr. Doolittle 2 and 3.

“Nothing else I’ve ever done makes me as happy,” the animal lover admitted.

“It’s not about making dogs do a certain action but them learning that they want to to learn – and seeing the fun in it,” Judd explained about her training techniques. 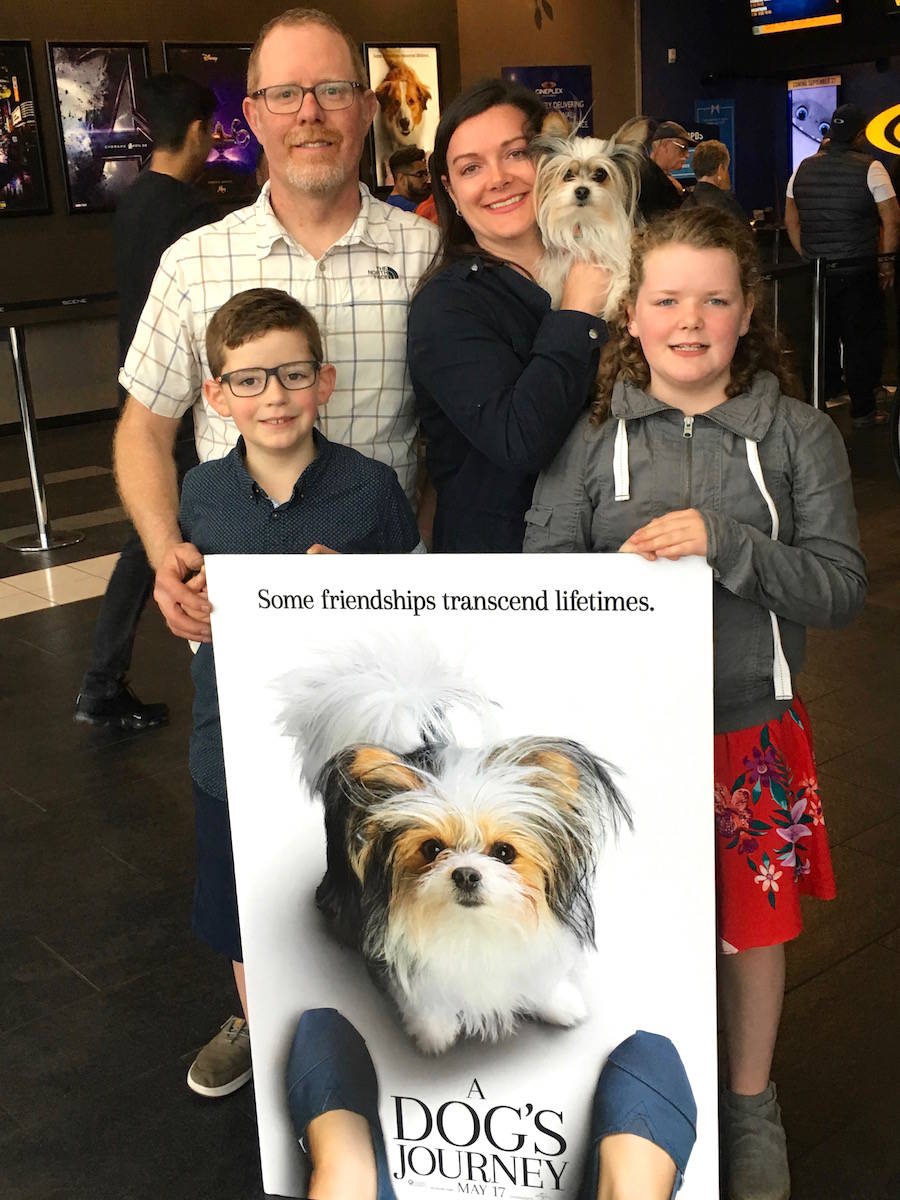 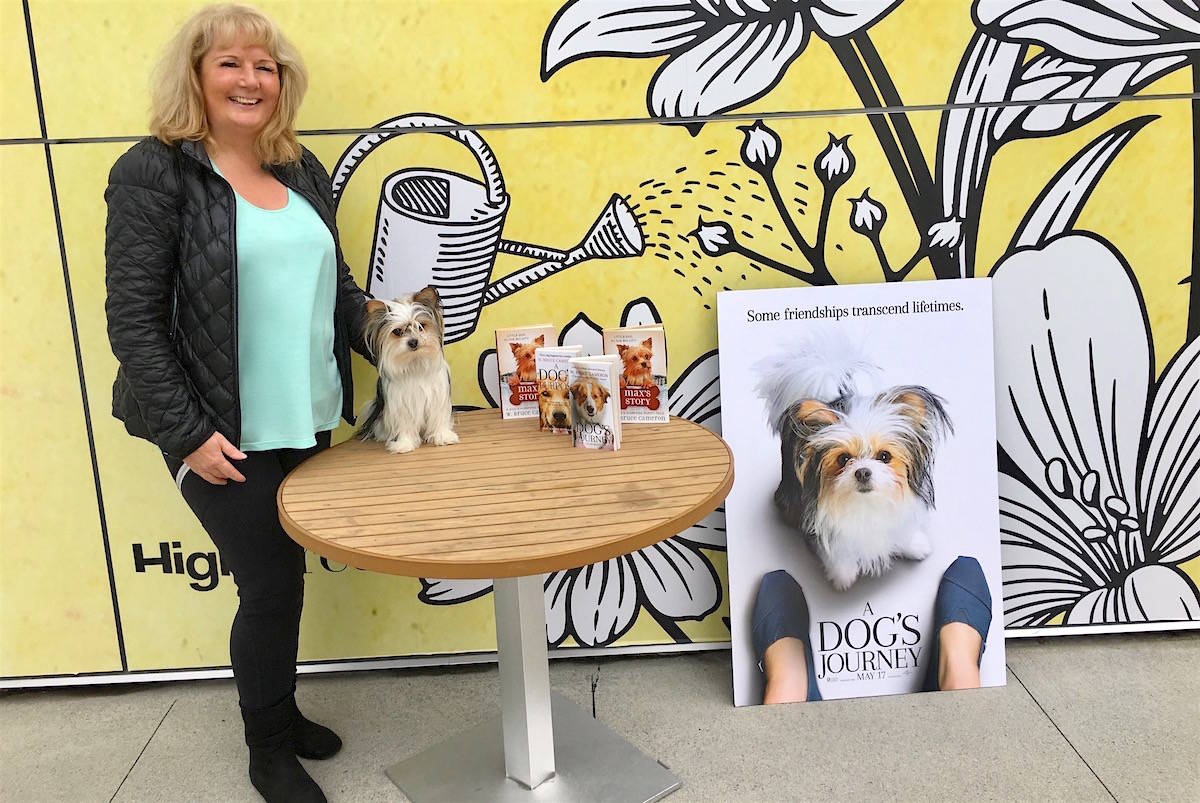 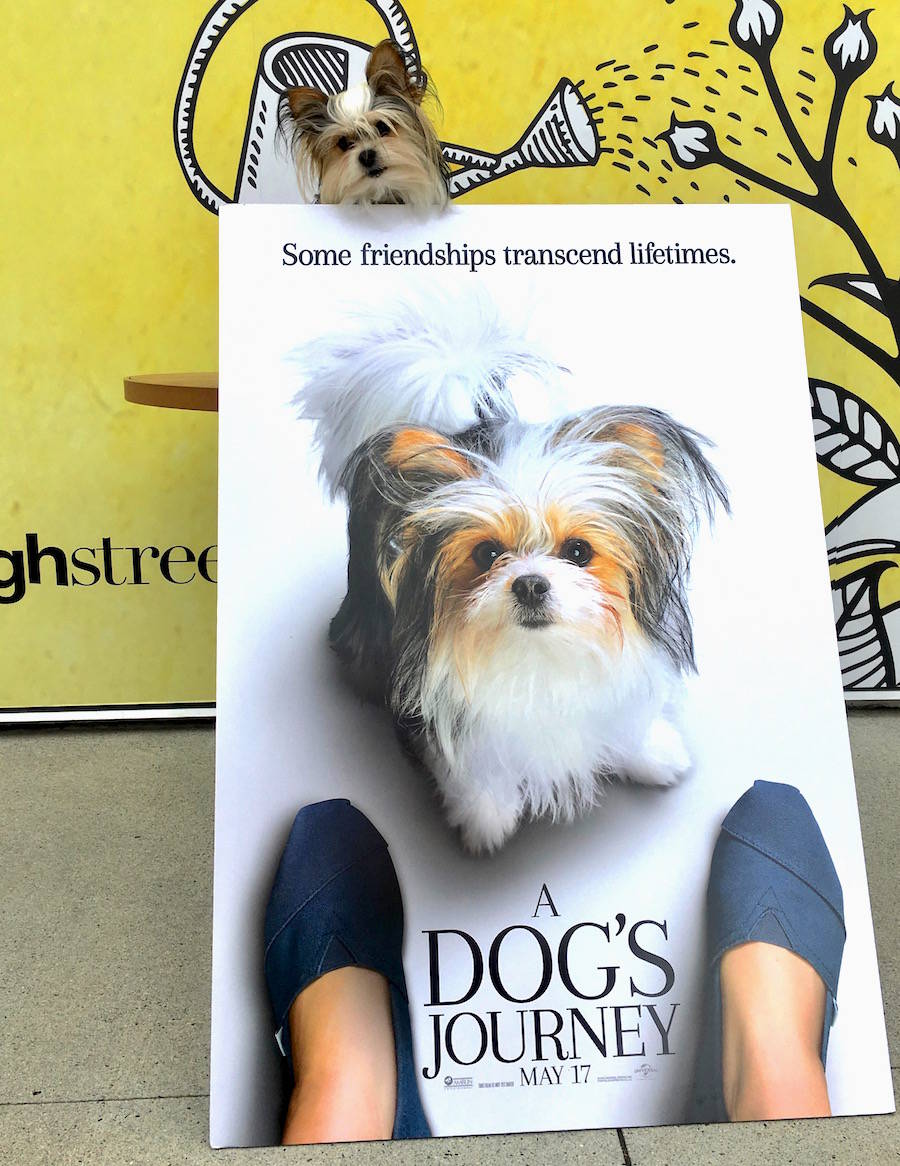 Bella poses with her movie poster for ‘A Dog’s Journey.’