Over the years, Pamela Dangelmaier has noticed that she tends to meet the people who eventually impact her life in a big way, in the strangest places and at the strangest times.

One such occasion was while attending a lively meeting at a Metro Vancouver garden club.

Dangelmaier, co-owner of Botanus, a mail-order flower company, was sitting in on the event with her business partner Elke Weninger, and customer care manager Wendy Leroux, when the drama between the club’s members began to surface.

“Through building up the business, one of the things we do to promote and get to know our customers is go to garden clubs. So we’ve spoken at many, many garden clubs in the Lower Mainland, on the island, the Sunshine Coast and so on. And through those visits to those garden clubs, we’ve had the opportunity to meet some really fun and interesting — and sometimes rather quirky — people, because gardeners are an interesting bunch,” she explained.

“We had a particularly interesting club, and they had a very interesting meeting — obviously there was a lot of politics going on in the club. And after we left, I turned to Elke and Wendy and I said, ‘You know, I swear one day I’m going to write a book about these garden clubs because they’re just so fun.’”

Four years later, and Dangelmaier is making good on her promise with the release of her very first novel, Flour Garden.

Set at the Kerrisdale Garden Club, Flour Garden follows two friends who have fallen out of favour with one another, as they find there way back together.

“There’s lots of really interesting characters in it. I think if you belong to any kind of club, it doesn’t have to be a garden club, you’ll probably recognize the characters that are in the book, the politics that go on,” Dangelmaier said. “It all culminates in a garden show that takes place at a fictitious botanical garden in Vancouver, sort of reminiscent of the VanDusen Flower and Garden Show.”

Although based on experiences Dangelmaier has had, all of the characters and events in her novel are from her imagination, and the scenes weave in underlying themes of relationships, friendships and grief.

“Some of the really good feedback that I’ve gotten from the book so far is that people have said it feels like a real community, it’s some place that they would like to go and visit… So for me, that’s the highest compliment of all, that it doesn’t seem so out there and ridiculous.”

Dangelmaier chose to self-publish the book, and through that process, taught herself to do all of the interior layout. She also received help from her brother, a graphic designer, who created the front cover, and Heather Conn, a copy editor from Vancouver Island, who Dangelmaier met while completing the Camino de Santiago pilgrimage in northern Spain.

“The most enjoyable part, really, is the writing, the making up of the story — that was really fun to do,” she said. “Of course, the other really enjoyable part is to finally actually see it. When the shipment arrived with a number of copies that I ordered, that was quite a thrilling day for me because it was really, truly a dream come true.

“I had been wanting to have a novel for so many years. There’s times when you think, ‘Oh I don’t know if it’s ever going to happen.’ And then when it actually does, that’s pretty exciting.”

Dangelmaier, a graduate of Langley Secondary School, had never intended on owning her own flower business.

After studying theatre at UBC, she worked in the entertainment industry for a number of years, before moving to Germany to pursue one of her dreams of learning to speak German.

She lived abroad for six years, working for different marketing companies, and eventually met her future business partner, Weninger, a master florist who owned a flower shop in Munich.

When Dangelmaier came back to Canada, she “literally fell into” an opportunity to purchase a small mail-order company that specialized in flower bulbs in Langley.

Beginning in 2000 with a leaflet selection of 100 bulbs and a mailing list of a couple hundred people, today their company has grown into one of the largest mail-order nurseries in Canada, supplying The Shopping Channel and other large businesses.

“It was kind of organic how it happened,” she said. “My dad was self-employed, owned a business here in Langley. So I kind of grew up in a family of self starters. My brother owns his own business, my sister is self-employed and so is my other sister, so it runs in the family. I guess I was always headed in that direction.”

Dangelmaier and Weninger have “literally grown up with the industry,” transitioning from having no website to now hosting an online garden club with weekly YouTube promos.

“It’s not an easy business to do, but if you market it correctly it can be great,” she said.

On Saturday, May 20, Dangelmaier will be holding a free book launch event at Tracycakes in Murrayville.

On from 6-9 p.m., there will be prizes, a number of live readings, and signed books available to purchase.

Flour Garden can also be ordered online on Amazon, and signed copies, with free shipping in Canada, are available at www.botanus.com. 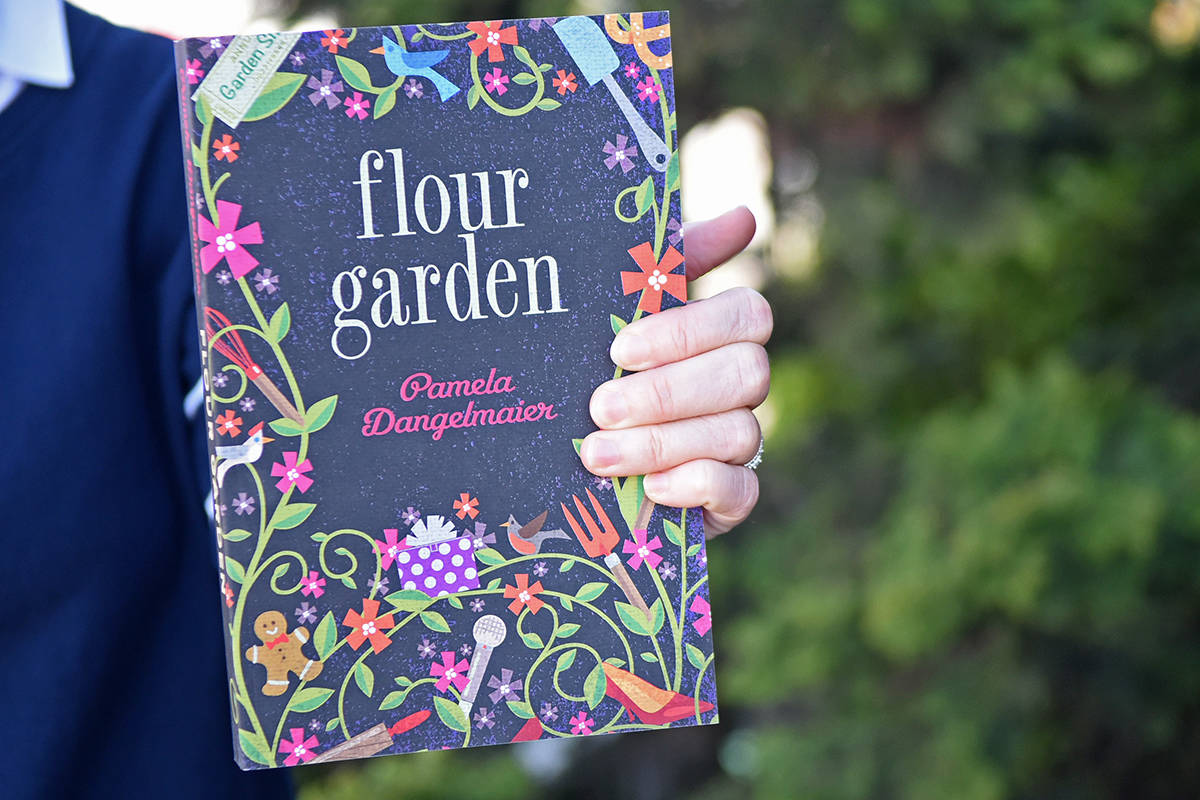 Pamela Dangelmaier, author of Flour Garden, will be holding a book launch event on May 20 at Tracycakes in Murrayville. Miranda Gathercole/Langley Times