The 43rd Annual B.C. Country Music Award’s shortlist is made up of a significant amount of Langley performing artists; Emily Taylor Adams, Karen Lee Batten, JoJo Mason, and Mitch Merrett are just a few of the local names nominated.

The 2019 ceremony, hosted by Keri Adams, will be held at Hardrock Casino in Coquitlam, Sunday, Oct. 20th.

JoJo Mason from Clayton Heights is close behind Pritchett with four nominations, also for Entertainer of the Year, Male Artist of the Year, Single of the Year for “Better On You,” and Fan’s Choice.

“I’ve been doing this for four or five years now and I still haven’t taken a BCCMA award home yet,” Mason laughed. “This year’s gonna be my year.”

Mason had nothing but praise for his hometown support and all the listeners who’ve allowed him to live his dream; he was quick to point out B.C. seems to be made for making country artists.

“You just look at the talent that comes out of this province… Chris Buck… Washboard Union… I feel pretty blessed to be right up there alongside them,” Mason added.

The “Better on You” singer will also be performing his hit single at the awards ceremony. Mason said his nerves haven’t quite hit him, but admitted he tends to become an “absolute mess” right before heading on stage.

“The minute I get up out there though, everything goes away and I’m just in it,” he said.

Langley resident Karen Lee Batten is up for Female Artist of the Year and Fan’s Choice, telling the Langley Advance Times that the latter came as a pleasant surprise.

“I didn’t know about fan’s choice,” Batten said when she found out about the nominations. “It’s a pretty cool feeling.”

Batten said she had hosted the awards ceremony in past years, and will be outside interviewing guests and nominees as they enter the building this time around.

“The industry is like one big dysfunctional family,” Batten said, “It doesn’t matter if you win or lose, it’s about showing up and getting to talk with people and learning from them.”

Batten announced that she is headed back into the studio later this month to start recording new music, adding that she has her home to thank for inspiration and and enthusiasm.

Along with Batten, Emily Taylor Adams is up for Female Artist of the Year, as well as Video of the Year for “Leave the Light On,” and will be performing at the ceremony.

“It feels amazing to be recognized,” Taylor Adams said. “We all work so hard and you kind of have to be crazy to be doing this for a living, but we’re all family.”

Taylor Adams added a congratulations to her fellow nominees and thanked her home, Langley, for its continuous support.

Another resident, Mitch Merrett, is up for both Producer and Songwriter of the Year; he said the awards are a highlight for him every October, again, building on the notion of family.

“It always feels great getting a tip of the hat from your peers in the industry. I love attending the B.C. Country Music Awards every year it’s like a big huge awesome family reunion,” Merrett explained.

Gabby’s Country Caberet is up for Country Venue of the Year while Clayton Heights resident Stephano Barberis is also up for Best Video Director.

Country music heavyweights Chad Brownlee and Dallas Smith, both residents of Langley, withdrew their names this year for consideration to give more opportunities to emerging artists.

FEMALE ARTIST OF THE YEAR

MALE ARTIST OF THE YEAR

GROUP/DUO OF THE YEAR

VIDEO/LYRIC VIDEO OF THE YEAR

Aaron Pritchett – Better When I Do

Kadooh – Somethin’ To Roll On

The Promised – We Could Be in Love

The Washboard Union – She Gets Me

SINGLE OF THE YEAR

Aaron Pritchett – Better When I Do

JoJo Mason – Better On You

Kadooh – Somethin’ To Roll On

The Washboard Union – She Gets Me

ALBUM/EP OF THE YEAR

Aaron Pritchett – Out on the Town

Chris Buck Band – All In

Sons of Daughters – Love in a Bar

SOCAN SONGWRITER OF THE YEAR

“She Gets Me” – Aaron Grain, Chris Duncombe, David Roberts, Gordie Sampson – performed by The Washboard Union

COUNTRY CLUB ACT OF THE YEAR

COUNTRY VENUE OF THE YEAR

VIDEO DIRECTOR OF THE YEAR

PRODUCER OF THE YEAR

INTERACTIVE ARTIST OF THE YEAR 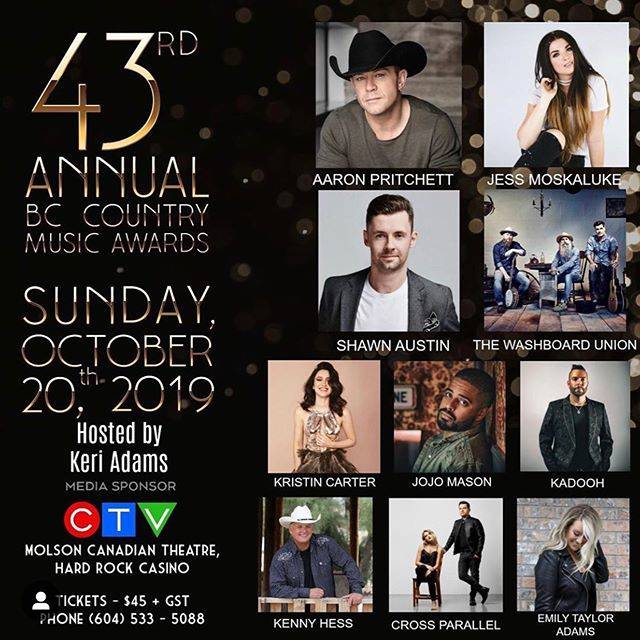 West My Friend an acoustic blend of guitar, mandolin, and accordion

VIDEO: The moment when a log boom destroyed a Langley bird habitat

Habs hang on to edge Vegas 3-2, even NHL semifinal series at a game apiece

More than 76% of eligible people have received their 1st shot

Air travel taking off in B.C., but lack of traffic controllers a sky-high concern

There will be demand for more air traffic controllers: Miller

B.C. couples ‘gambling’ on whether COVID rules will let them dance at their wedding