Twelve years after Frances McGuckin swore she would never write or speak again, the 66-year-old finds herself with two nationally published stories.

McGuckin, an award-winning small business author, speaker and former Langley Times columnist, is one of 95 writers to have selections chosen for Chicken Soup for the Soul: The Spirit of Canada, a book that celebrates Canada’s 150th birthday with “101 stories of love and gratitude.”

It’s a proud moment for the former Langley resident, who after suffering a traumatic brain injury in 2005, watched her career spiral from being Google’s number 1 small business author, to barely being able to remember what she read minutes after seeing it.

In the spring of 2005, McGuckin had just had two books published in the United States, and was preparing to springboard internationally, when “a lady came through a red light and hit my sports car. And that was game over. Everything I worked for — I was 54 then — just gone in a second.”

What was once a very busy, social life, instantly became one of pain and recovery.

“Nobody knows what it’s like when you feel like the same person inside, and you can’t operate like that anymore,” McGuckin said. “You hear about a lot of people with head injuries, like hockey players, contemplate suicide. And I can understand why. And I went from those depths to where I am today.”

Struggling with depression, McGuckin packed up her life in Langley and moved to a log cabin on the Sunshine Coast with her 100-year-old mom.

“I said I would never write or speak again, it was that bad,” she recalled.

“I just needed to run away — that was one of the residual things (from the accident) was not making sound decisions. But my intuition took me there and I still believe there was a reason for it, like a big life lesson. And my mom loved it, she said it was the happiest years of her life before she fell and ended up in the hospital (she passed away this past January at age 107).”

In 2015, McGuckin felt a calling to come back home, and began looking for houses in Langley. But with a hot real estate market, she found herself unable to get back in. Reluctantly, she settled in west Abbotsford — a decision that ended up changing her life for the better.

“It’s been magical,” she said. “They call it Eden Court, we’re behind two churches. It’s quiet, it’s a huge house, it’s a strata so they cut and trim everything, I just play with my flowers. But that’s where I found out there was a writing group.”

“I felt a real pressure to produce every two weeks. Like, my God, I have to do this. I have to actually commit to writing again. And it was really good for me.”

It was through this writing group that McGuckin heard about Chicken Soup for the Soul.

Every two weeks the members would get together and write submissions as practice, and amazingly, both McGuckin, and fellow member Pamela Kent, were published in the Canada 150 edition.

Kent, 86, is an Aldergrove resident who also suffered brain damage. At the age of 28, she had a brain aneurysm that paralyzed her down one side. She began writing at the age of 60, after taking a writing course.

For the book, Kent wrote a piece titled The Last Night of Proms, detailing her memories of concerts at the Vancouver Symphony and in England, her native home.

Both of McGuckin’s stories, This is How We Do It and My Log Home Critters, are from experiences on the Sunshine Coast.

The first is about the 2015 Old Sechelt Mine fire, and how McGuckin watched the story unfold on Facebook. And the second, which came to her “out of nowhere” at 10 p.m. one night, is about the animals that lived at her cabin.

“It’s amazing, it’s so validating that it really encourages me to keep on doing what I’m doing,” she said of being published.

“I said I would never do this again, I’m no good. I gave all of my books away before I left. I couldn’t look at my website, my videos, nothing. So to be here now, it’s amazing.”

The Spirit of Canada was released on June 6, and McGuckin attended an official launch in Toronto on June 13.

Some of the B.C. authors will also be doing book signings at Coles in Lougheed Mall in Burnaby on July 2 from 1 to 3 p.m.

Just last week, McGuckin updated her website for the first time in 12 years to share her new published stories — something she wouldn’t have been able to do two years ago.

For her next project, McGuckin feels compelled to write about brain injury, to help those who are undergoing the same challenges she did.

“Going through what I have, I’ve learned, to me, the true value of life,” she said.

“I’ve learned the importance of family, your health, your friends, and just to be so grateful for every minute of everyday that we are given. And now, at my age, I can finally say I’m at peace with the world, I love every day. I’m here to help others.

“So it’s given my writing a different depth. And that’s where I want to come from. I want to give people hope and inspiration because I never thought I would get to this stage where I would get two stories published in a book like that. I thought it was game over.” 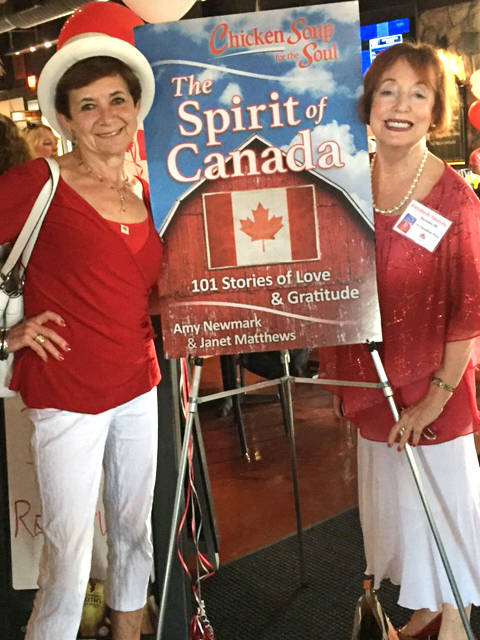 Frances McGuckin with author Elizabeth Smayda at the official launch for Chicken Soup for the Soul: The Spirit of Canada, in Toronto on June 13. 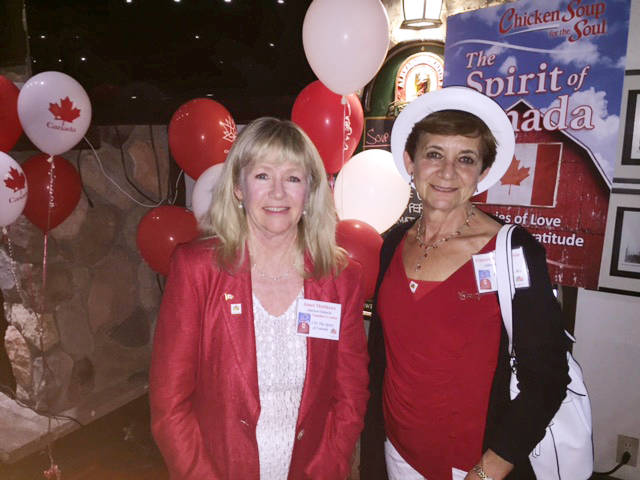 Frances McGuckin with Janet Matthews, co-author and compiler Chicken Soup for the Soul: The Spirit of Canada, at the official launch in Toronto on June 13.