Langley Community Chorus is celebrating 25 years of singing together with a pair of Silver Jubilee Concerts this coming month.

The Langley Community Chorus began with only 15 singers in 1992 and has since grown to the 80-plus members you see perform today.

They are men and women of all ages who love to sing and perform. Members come from Langley and the surrounding areas and have one major thing in common: a love for singing and making music with others. They are a mixed voice choral group (known as SATB, standing for soprano, alto, tenor and bass voices) and they are a registered non-profit society.

The concert will pay tribute to a founding member, Stan McCreary, who sang with LCC for 10 years, and who recently passed away on October 22, 2017.

Founding member Chris Laborde said her husband Arne Larsen first met Stan in the spring of 1992 while at rehearsal with a men’s-only choral group in Lynden, Washington. Stan and June McCreary were among a handful of people who were then planning a new mixed voice (SATB) group in Langley Township.

The fledgling group arranged rehearsal space rental, finding and hiring a choral music director, John Neufeld and accompanist, Ligia Oancea, for the first rehearsals starting in the fall of 1992.

“We also owe June gratitude for her support, having continued to sing with us five years after Stan had to ‘retire’ due to declining health, and for June’s continued support at our Murrayville concerts since her own ‘retirement’ from our chorus 10 years ago,” said Laborde.

“The first acting LCC President, Eileen Lewis, left the chorus early in 1993, so Stan stood as LCC President for a year until the LCC formed a board,” said Laborde.

“Then Lisa Weih served as President for five years until we had enough members to rotate service positions. It was quite exhausting work in those days as, due to limited resources, we had to hire six different music directors and many more accompanists in those first eight years.

“However, due to the support and generosity of chorus volunteers and the Langley community, we have at last become the group we set out to be, especially in the past six years under the brilliant and skilled leadership of our Music Director, Anita Comba. We’re also incredibly fortunate for the unparalleled and talented support by Donna Phillips, our accompanist of the past five years. We have an enthusiastic dream team serving on the chorus board and we look forward to our upcoming Silver Jubilation celebrations,” said Laborde.

Comba and Phillips make great music together – sometimes they even perform feature songs at the chorus concerts – and they help the chorus sing and perform to the best of their abilities.

Comba has received many awards over the years, including the recently awarded Joyce O. McGuire Award for outstanding, long-term service as a choral accompanist. She has worked with numerous groups as a vocal coach, music director, répétiteur, accompanist, and arranger for choral and instrumental repertoire. She is also is a gifted solo performer.

“It’s always fun to attend rehearsals even though we may find some of the music ‘difficult’ at first,” said a member. “We rehearse from September to December to prepare for our winter/Christmas performances and from January to May for our spring concerts. We also do shorter performances at two Langley Seniors’ facilities and at various community events.”

In related news, the recently-formed chamber group, the LCC Ambassadors, made their debut in December 2016. The LCC Ambassadors are a group of 13 chorus members who represent the larger group at smaller venues and community events.

The chorus winter Silver Jubilee concert performances are scheduled for Saturday, Nov. 25 and Sunday, Dec. 3 in Langley, with both shows starting at 3 p.m.

Comba asked chorus members for suggestions of favourites, and out of hundreds 20 songs were chosen. The songs range from the fun You’re a Mean One Mr. Grinch to the more serious standards such as the Hallelujah Chorus, Silver Bells and Let It Snow. There is a Jewish seasonal song called Hannukah Prayer as well as a country hoedown tune called Come and See What’s Happening in the Barn. There will also be the Canadian classic,Huron Carol, as well as a bilingual version of O Holy Night.

“It’s the spirit of “Harmony” on so many levels, musically, socially, physically and spiritually that seems to mark our evolvement as a community choral group about to celebrate 25 years of delight in and appreciation of vocal music as we continue to develop new skills through encouragement, fun and inclusiveness,” said Laborde.

Tickets are selling fast and concert-goers are encouraged to order their tickets in advance. Tickets are $18 adult, $10 student, and children under 12 are admitted free of charge. Tickets can be purchased on-line at Brown Paper Tickets, from long & McQuade in Langley and from chorus members, email lcctickets@gmail.com

Further information is available on the Facebook page www.facebook,com/langleycommunitychorus and the websitehttp://www.langleychorus.org/ 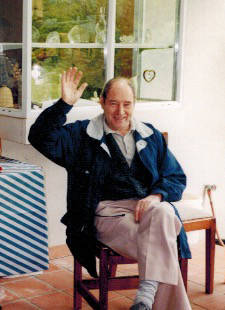 The late Stan McCreary at the 1999 AGM held in South Langley. 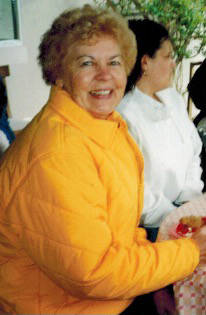 June McCreary at the 1999 AGM held in South Langley.