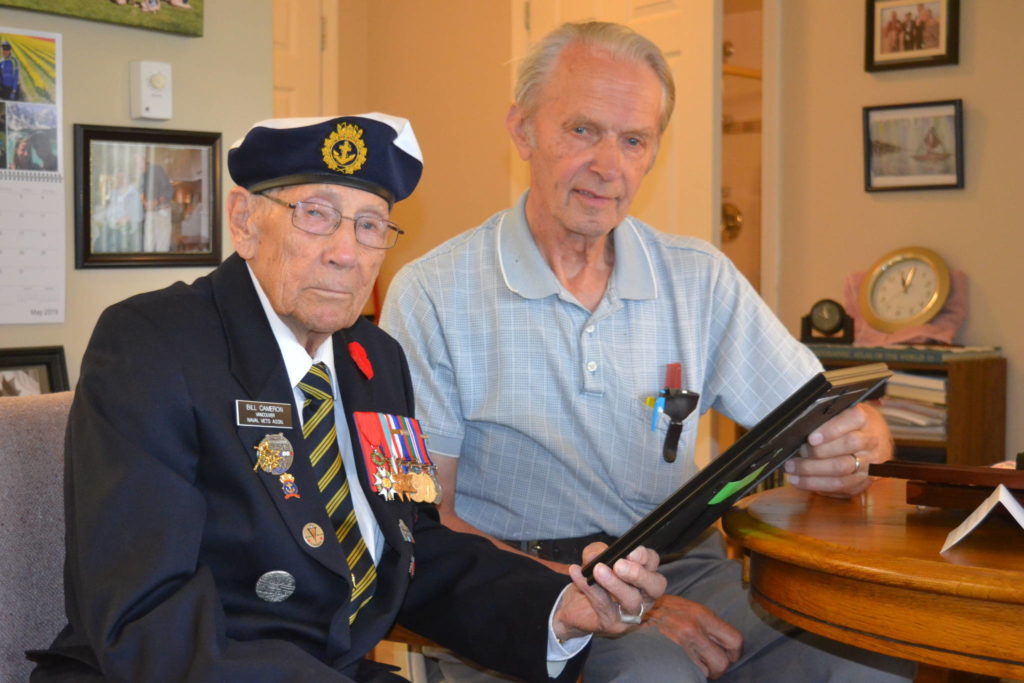 Navy veteran Bill Cameron (left) who was among the crew of a Canadian corvette providing covering fire during the US landing at Omaha Beach will be a special guest, along with neighbor Kees Koster who was a young boy in occupied Holland when D-Day took place. File photo

The Langley-based First Capital Chorus’ Remembrance show is an eagerly-anticipated annual tradition on the Semiahmoo Peninsula.

“For a lot of people – including older people who don’t get out and about as much and no longer attend cenotaph ceremonies – this is their Remembrance event,” chorus member Denny O’ Donovan noted.

O’ Donovan is serving for a second year as producer of the show – scheduled for Saturday, Nov. 9 (at 2 and 7 p.m.), at St. Mark’s Anglican Church, 12953 20th Ave. – following up on last year’s well-received Moments To Remember.

That show struck a resonant chord with the local audience, effectively reinventing the concert as a cross-generational tribute to those who served in the military in all the decades from the First World War to today.

But as the title of the current show – D-Day: 75 Years Ago – indicates, O’Donovan and the organizing committee didn’t have to reach far for a premise for this year’s musical tribute to those who served.

The 75th anniversary of D-Day – the invasion of Europe by liberating Allied Forces, which began with the landings in Normandy by Canadian, British and U.S. forces on June 6, 1944 – provides a natural focus for Remembrance activities. It was these events that marked the turning point of the Second World War, and the beginning of the end for Hitler’s Third Reich.

“We became a mixed group about six years ago with the addition of some female members,” committee member Leigh Anderson said. “Although we didn’t become a mixed choir officially (under the aegis of the parent organization, the Barberhop Harmony Society) until this January.”

Committee member Derek Sanft said the chorus – which will celebrate its 50th anniversary next year – is continually seeking to develop sub groups and ensembles.

“We can meet an hour-and-a-half variety show because we have these groups within groups – and it breaks up the chorus on stage,” he said.

Highlighting this year’s show will be the presence of two South Surrey residents – to be interviewed on stage by Garrett – who can speak about D-Day itself and its subsequent impact on the civilian populations of Europe who had lived under the heel of Nazi occupation.

Bill Cameron, a Canadian Navy veteran (profiled in Peace Arch News in June), was on a corvette that provided covering fire for U.S. forces storming Omaha Beach on D-Day, while his present neighbour Kees Koster, was a young boy in Holland at the time.

“Kees told me everyone was so excited at the news of the invasion, and were saying ‘the Tommies are coming,’ which is how the Dutch people referred to both the British and Canadian troops,” O’ Donovan said.

“And as well as being buddies, Bill and Kees are well-known locally as members of the Peninsula United Church community,” Sanft noted.

Adding another layer to the musical program, the jump jazz style of music – popularized in 1944 by artists like Louis Jordan and the Tympany Five – will be recalled by the exuberant piano and vocal stylings of guest headliner pianist and vocalist Diane Lines.

As Sanft pointed out, in addition to having worked extensively with legendary bandleader Dal Richards in his later years, Lines has also been a mentor for young musicians in the Vancouver jazz scene.

“She’s a very exciting performer who’s worked with everyone from Michael Buble to Shari Ulrich – and we’re so happy she was available to join us for the show,” O’Donovan said.

“With her musical abilities and playing with Dal Richards and knowing the music of the ’30s, ’40s and ’50s so well, we thought she’d be a great fit.”

Also adding musical flavour will be another guest mixed group, the Full Measure Quartet, including singers from B.C. and Washington State, while David and Dorothea Dahl will be on hand to contribute a stirring performance of Amazing Grace, backed by the chorus.

There will also be a significant display of D-Day memorabilia – plus items recalling the First World War – in the church hall during intermission, O’Donovan said.

A First World War medley and a reading of In Flanders Fields are still a valued part of the program, organizers said – the notion of Remembrance retains significance whether or not audience members have personal memories of the conflicts remembered.

Indeed, while seniors residences still provide many of the loyal supporters of the show, the audience mix is becoming younger, O’Donovan observed, which bodes well for the continued validity of the show.

“If you go to the cenotaphs on Remembrance Day, you find an awful lot of younger people who are going there because they feel it’s important to continue the tradition.”

Tickets ($20, forces veterans free) are available from Pelican Rouge in Central Plaza, the Crescent Coffee House (formerly The Wired Monk) in Crescent Beach or from O’Donovan at 604-536-7983.