Susan Magnusson was one of half a dozen teachers at the Langley Community Music School in 1973 when she moved to Langley.

“I was working full time in Vancouver at Finning Tractor,” said the current principal of the music school.

The small school had relatively few students, but it had an opening for a piano teacher so Magnusson made a big life change.

It’s been her creative home ever since. When the school moved into its own building in 2001, she became the principal.

Now as the school, which got up and running in the late 1960s, is on the cusp of its 50th anniversary in 2019, Magnusson is handing the reins to current vice principal and former student Carolyn Granholm.

“I plan to teach and still stay involved,” Magnusson said.

During her tenure, she’s tried to increase the awareness about the school and the value of music education.

“Now I have the children of the students that I taught in the early years [studying at LCMS],” she noted.

Soon after joining the school, she was tasked by Ian Hampton, the head of the school, with looking into the Suzuki method of teaching music to young children. She brought in the program, starting with piano. It’s now used to teach piano, cello, violin, and harp. And the school has programs for babies and toddlers.

Magnusson is also one of the few Canadians qualified to teach Suzuki to teachers.

She said a highlight of her career has been bringing that program to the community. Magnusson is also proud of the school’s reputation in the music community and being able to attract high quality teaching staff.

“Because of the faculty we can bring in artists from around the world,” she added.

In addition to her work at the school, Magnusson, named the H.D. Stafford Award winner in 2013, has been active in the community.

She has served on the Canadian-American Suzuki Institute, the advisory committees for Kwantlen College University and Mount Royal College, the board of On Stage Langley (a non-profit effort to promote arts and culture), on the committee that established a local jazz festival, the boards of the B.C. Summer Games in 2010 and the B.C. Seniors Games in 2014, the Tourism Langley board, and the Langley City Recreation, Culture and Public Art Advisory Committee.

As of September, her title becomes principal emeritus.

Granholm takes over a facility with more than 900 students, ranging in age from newborn to over 80, and about 57 faculty. In fact the school may have to look at expanding to keep up with demand.

The school has students from around the Lower Mainland and beyond.

“Our summer program attracts people from around the world,” Granholm noted.

“My mother enrolled me in the violin program at the school here,” she said of her first exposure to LCMS.

She was the youngest in her class and wasn’t playing on all the violin strings at the time.

Ian Hampton, head of the school at the time, took her aside and gave her her first piano lesson. She’s still a pianist, though she took up flute later as well.

Granholm found her artistic home at LCMS, and upon her taking over comes the school’s 50th anniversary celebrations.

Many events have already been planned, including a concert by patron Jon Kimura Parker, a renowned pianist who played his first recital at LCMS, as well as concerts by other alumni who have gone on to make some noise on the international music scene.

Despite the success of the school, it remains something of a hidden secret to many in this community.

Magnusson noted that one of the challenges for the future will be keeping up with the growth and changing demographics.

“This community is growing rapidly and one of the hurdles is we tend to be one of the best kept secrets in Langley,” she said.

The school has evolved over the years, offering more contemporary music training and branching out into music from other cultures.

Granholm said the school’s legacy will continue, including offering low and no cost programs to some who would not otherwise be able to afford them. LCMS has a program at Blacklock Fine Arts Elementary to provide violin instruction.

“We’re very proud of our free children’s choir,” she added.

The school also offers scholarships and bursaries to help families.

“It’s doing that sort of work that we can’t continue to do without the continued support of the community,” she said. 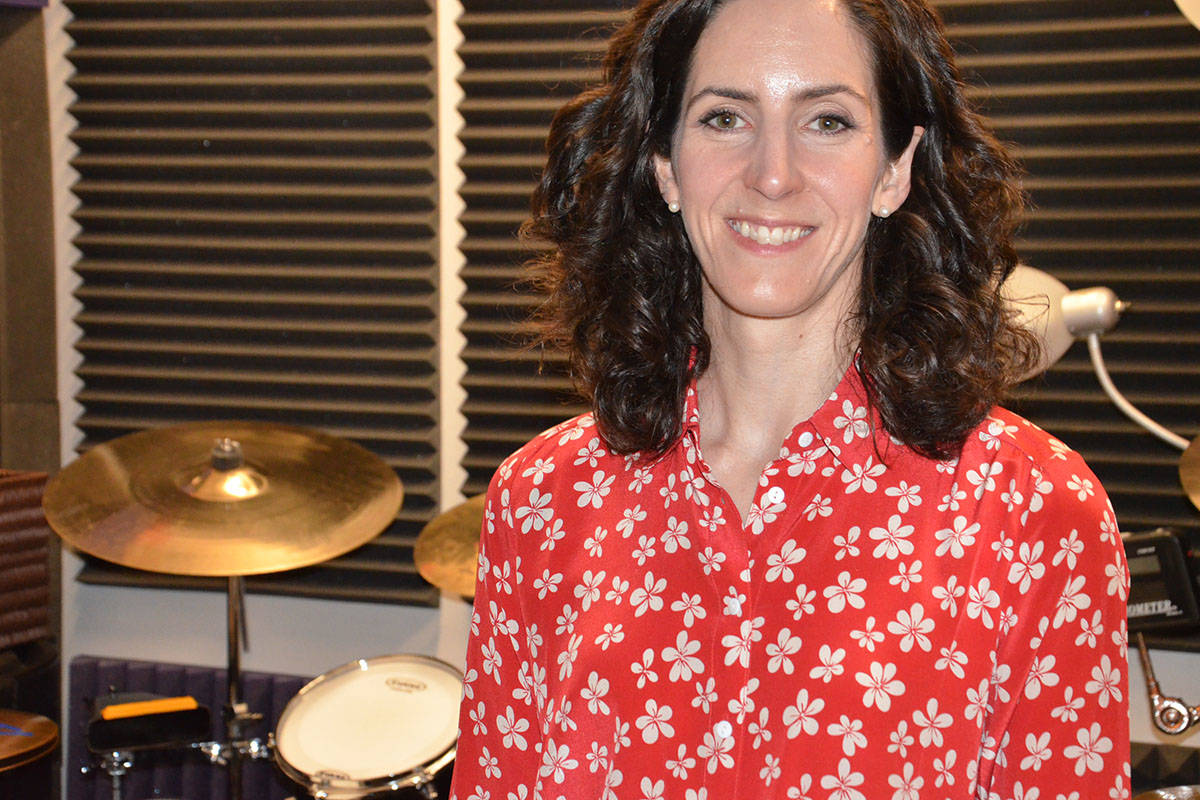 As the Langley Community Music School reaches its 50th anniversary, Carolyn Granholm takes over as principal. In recent years the school has broadened its scope to include more contemporary music, including a drum program. (Heather Colpitts/Langley Advance)