Dallas Smith of Langley was one of two big winners at the Canadian Country Music Association Awards in Calgary on Sunday evening.

Smith, who co-hosted the show with Billy Ray Cyrus, won for male artist and entertainer of the year, which was reintroduced to the award show for the first time in 30 years.

He credits his mother for getting this far and convincing his father to lend him money to make his earliest recordings.

“My mom doesn’t come to these things very often. It’s been a while but my mom kicked the ‘you know what’ out of cancer this year,” he said.

“If it wasn’t for my mom, I would never be here period for many, many reasons.”

He said the entertainer award shows what you can do if you apply yourself.

“I would skip school because I would be so afraid to make that presentation in school and I’d fail a class. This is what happens when you get the right team behind you and you push yourself, you challenge yourself. You overcome those things.”

Tenille Townes of Grande Prairie, Alta., was named female artist of the year and won for single of the year for her song ‘Somebody’s Daughter’. She also won previously announced awards Saturday for video and songwriter of the year bringing her total to four.

The 25-year-old seemed shocked when her name was called out.

“This is crazy. Thank you so much to the CCMAs. I’m just so proud and grateful to be part of this country music family. Speaking of family I have a lot of family in the house tonight. I love you guys so much,” Townes said choking back tears.

“This is for all the little girls out there singing along. Please don’t give up on those dreams.”

Brett Kissel was the recipient of the fan’s choice award.

“This is like the Stanley Cup right here for me in my business right here. We had the best times of our lives this year thanks to you guys, seriously. This is so amazing and something I don’t take for granted,” Kissel said.

Billy Ray Cyrus and Terri Clark kicked off the show with a blast from the past.

Cyrus reached to yesteryear with a rendition of 1992’s “Achy Breaky Heart” and was joined on stage by Clark, who was inducted into the hall of fame last year.

The remix, featuring Cyrus, helped launch the single to No. 1 on Billboard’s main chart for a record-breaking 18 weeks.

He said Calgary holds fond memories for him.

“Mine started in Calgary at a bowling alley, called the Silver Dollar Saloon,” he said. ”It was right there at that bowling alley that I got my very first gold record.” 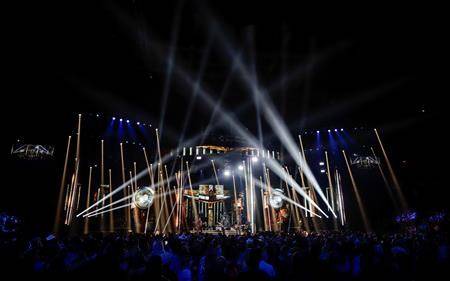 The Avengers to end Movies in the Park

Life-sized orca replicas expected for next Royal BC Museum exhibit