The vast fields, gentle hills and cottonwood forest of the MacInnes’ family farm is a familiar sight to fans of the show When Calls the Heart.

Its pastoral setting and temporary village of 1910-era buildings has served as the backdrop for the Hallmark television series for the last five seasons.

The 100-acre farm was a location that producers Michael Landon Jr. and Brian Bird couldn’t pass up.

There were already many historic-looking buildings from former sets conglomerated into a town, and surrounding it, a functioning farm that could provide the rural landscape they envisioned.

“The filming is a perfect compliment to the farming because it has no impact, especially When Calls the Heart, they’ve been so supportive of our farming,” said Melanie MacInnes, a second generation farmer who works on the property with her husband, Andrew, two sons Lachlan, 7, and Sebastian, 8, her parents, brother, sister-in-law and two nieces.

“They work with us. If we are doing barley, they’ll use it in the background of their scene. They are actually promoting our farming more and more.”

Last weekend, 450 super fans of the show got to see the farm for themselves in the Hearties Family Reunion, an annual event that allows people to tour the set and meet the actors.

This year, Melanie’s focus was to showcase that the farm outside of the fictional town of Coal Valley, is actually not so different from the show.

“When we did the hops harvest, we had about 30 women and men sitting around tables picking hops and just talking. They picked all the hops in about four hours and it was a social thing. It was just such a community building experience,” she said. “Some people put up on their Facebook (pages) that it was the highlight of their summer, because it was coming back to the roots of community and working together.

“And the amazing part is it kind of ties in with When Calls The Heart — that is was the show is about. It’s about community.”

But that’s not to say it hasn’t been a difficult journey. Melanie and Andrew both have full time jobs off the farm, and her parents — now in their 70s — work the land every single day.

They are also applying to the Agricultural Land Commission for a non-farm status for the film set, after the ALC changed its regulations last year to limit filming on ALR land to 10 non-sequential days per year.

Pictured below: Melanie MacInnes’ son Lachlan, 7, holds up a piece of sprouted barley left over from their harvest.

The farm has been in the MacInnes family for 45 years. Melanie’s parents started out leasing the land from the government as part of a young farmers initiative for dairies. They built two large barns and other infrastructure, bought the cows and the quota, and by 1986 had run so far into the red that they nearly lost the property.

At that time, the government was interested in selling the land, and through working with the bank — and another farming initiative — her parents were able to purchase the farm for themselves. They increased their head of cattle to 300, and operated a full dairy farm until 1992.

“But they just couldn’t make ends meet, they just never could get their heads above water,” Melanie recalled.

Looking to diversify again, the family switched gears and began boarding horses, and took part in another initiative to plant cottonwood trees for making toilet paper. The cottonwoods take 10 years to mature, and nine years into their crop, the mill they were supposed to sell to shut down.

“We still kept selling a few through the years, but it wasn’t worth it. We’d cut them down ourselves and skin them so you get premium dollar for them, but still not enough to be worth cutting down and harvesting all of the woods. So we were kind of in a pickle at that point,” Melanie said. “We were scratching our heads. ‘OK what do we do now? What do we get into?’”

That’s when the movie industry called.

Scouts for Scary Movie 4 were doing a flyover of the area and spotted the MacInnes’ cottonwood forest. The trees, they thought, were reminiscent of Pennsylvania and would make the perfect setting for scenes mocking the film The Village.

“They asked to build the temporary movie set. It was a total fluke. So that allowed my parents to keep going and we kept logging the cottonwood, we had horses, we did some breeding,” Melanie said. “But the movies kept coming after that.”

In the meantime, Melanie went to school and got a job off farm, but constantly worried about how to keep the family property going.

“There’s no one else who loves this place more than the kids who grew up on it,” she said. “But I always was like, ‘How do we keep the farm?’ It was always a question at the back of my mind. And I just couldn’t put it together, I couldn’t figure out how we were going to do this.

“My parents never saved for retirement, they never could. So they never can stop making income. My dad works from dusk till dawn, and my mom’s out there making sure everyone’s fed.”

Two years ago she and Andrew wrote a business plan to revamp the farm and take it in a new direction. They decided to sink their teeth into five different areas — hazelnuts, honeybees, apple cider trees, hops and barley.

Just this month — while preparing for the Hearties Family Reunion — they planted 600 new blight resistant hazelnut trees (the Eastern Filbert Blight recently wiped out nearly all hazelnuts in the Lower Mainland), and have cleared five acres for their apples trees. Next year they plan to have 10 acres of barley, increase their beehives from six to 60, and plant just under two acres of hops. They also still have 36 acres of cottonwood trees, and will re-evaluate that area in five to 10 years as their new crops mature.

“Our land is not wonderful farming land. It’s quite acidic, the soil is more like clay loam, it’s better for trees than it is for huge crops of any sort,” Melanie said. “We don’t have great drainage. Also the topography of the land is very hilly and there’s big water bodies throughout it, which is beautiful, but not necessarily wonderful farmland. So we wanted to utilize every part of the land we could that is farmable with crops that could work with that land. It’s more of a permaculture style.”

And like the show When Calls the Heart, the family is looking back through history for help with their initiatives. They purchased an antique threshing machine from Alberta for their barley, as modern combines work only for big, flat fields.

“We’ve got rolling hills, not large areas. So by using the smaller old fashioned equipment, it actually works really well with our land, it doesn’t cause as much damage,” Melanie said. “We’ve also been working with the B.C. Farm Museum, getting advice from some of the old farmers who know how the equipment works. We’re able to dip into this knowledge base from the previous generations, and their knowledge is getting lost because we don’t use that equipment anymore.”

Pictured below: The MacInnes family has purchased an antique McCormick thresher for their barley. They had members of the BC Farm Museum come out to the farm to service the machine and show them how to use it.

The MacInnes family has also reached out to other small farmers for support. Melanie has recently partnered with Carolyn Essaunce of the Honest to Goodness Farm Co. to help with the beehives, and with Michelle from Crooked Fence Farm across the road and Davina from Nothing Beets Organic Farms to create a vegetable and egg box.

They are having a meeting with other young farmers next week to brainstorm new ways to sell their products and reach the customers who want to purchase local.

“We have lots of chickens and amazing free range eggs. I have the honey, they have the vegetables, Michelle has amazing jams and relishes. (There’s) just a huge assortment of things that people can get throughout the year” Melanie said.

To fund their farming operations until their new crops mature, Melanie is hopeful her family can continue filming on their farm.

“In terms of the future of farming, which is what the ALR mandate is, that’s exactly what we’re doing. The filming impacts it in no way. But it does allow my parents to — they still work all day — but it allows them to have income, it allows my brother to work full time on the farm and support his family, and then we also work on the farm. Maybe one day one of us will get to quit our other jobs.”

Melanie says that more and more young farmers are looking for creative ways to make extra income to pay for increasingly expensive operations. In the Lower Mainland, particularly, land is very expensive and maintaining and building new infrastructure is costly as well.

“People know from fixing up their own homes how expensive things can be, so imagine 100 acres of fences and silos and barns and gates. Every time you step out the door there’s something to spend money on,” she said.

Melanie fears that if her family loses the farm, the next owner would convert it to a horse estate, as many others in the area have done.

“There would be no farming. Because no farmer can afford to buy land like this and farm,” she said. “We’ve always supported the Agricultural Land Reserve. We believe in keeping this land for farming and food security. We’re 100 per cent behind them.

“The thing is, they have to understand the changing times, the truth of what is happening right now. It’s very difficult to receive enough money for your goods for the cost to produce those goods. And the young farmers that are getting into it, they really love what they’re doing, and they are suffering for it in a way where they have to work two jobs. It’s the starving farmer instead of the starving artist.” 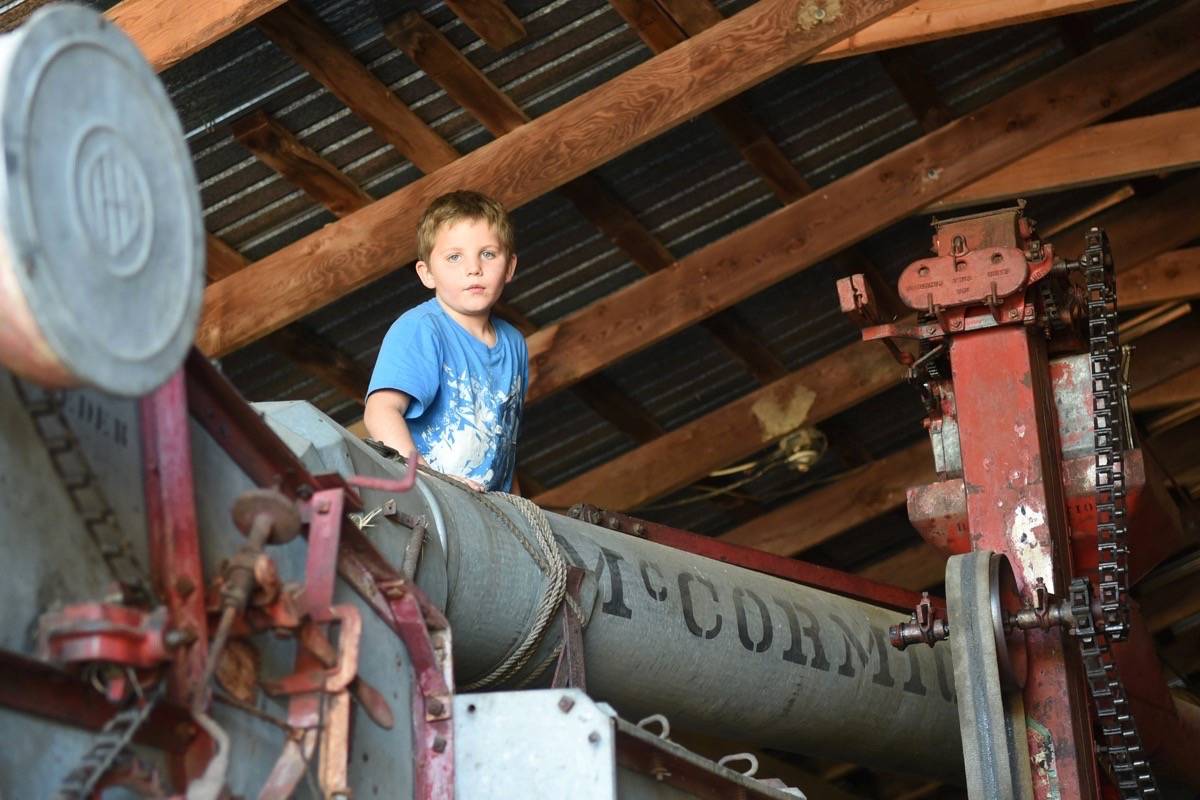 Lachlan Hamer sits on top of an antique thresher that his parents purchased for use on the MacInnes farm. Miranda Gathercole Langley Times 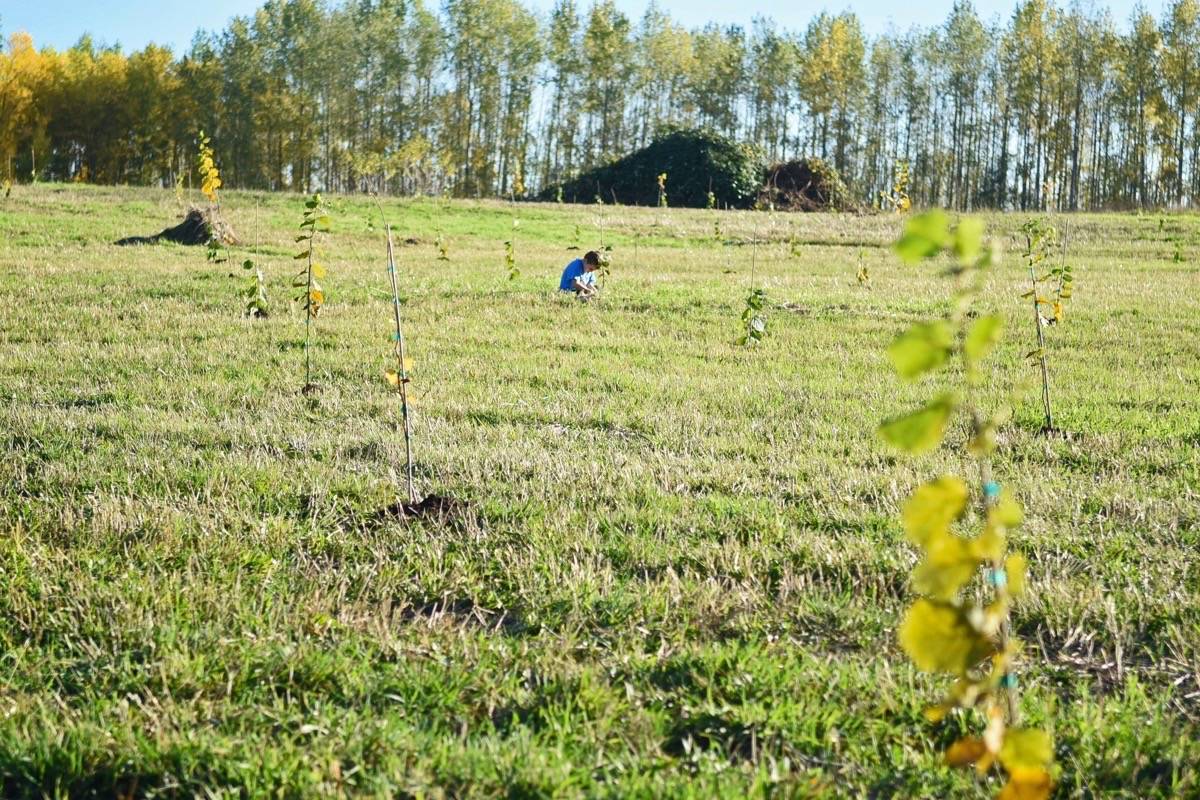 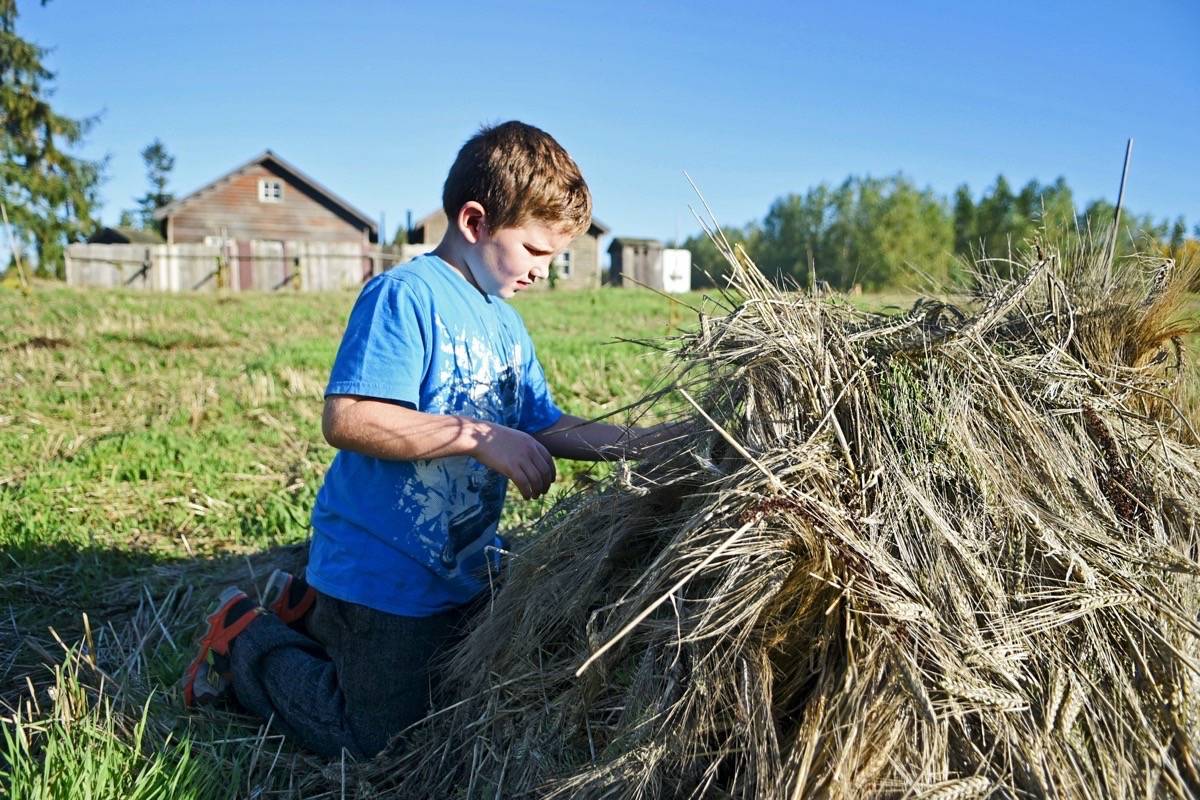 Lachlan Hamer explores a pile of barley that was left over from this year’s cultivation. Miranda Gathercole Langley Times 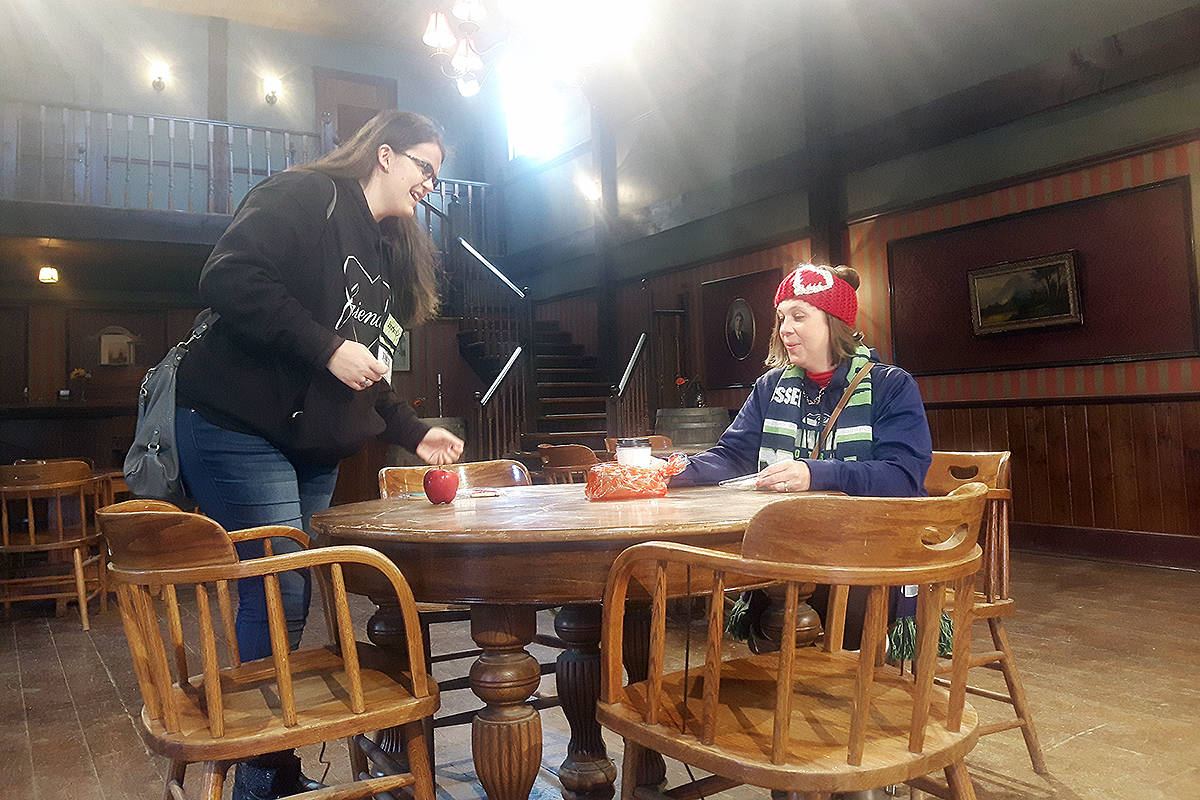 Jennifer Pelletier from South Dakota and Megan Depping from Washington State took a seat in the Langley saloon set of their favourite series. They were among more than 400 "hearties" who paid the set a visit Sunday. Dan Ferguson Langley Times 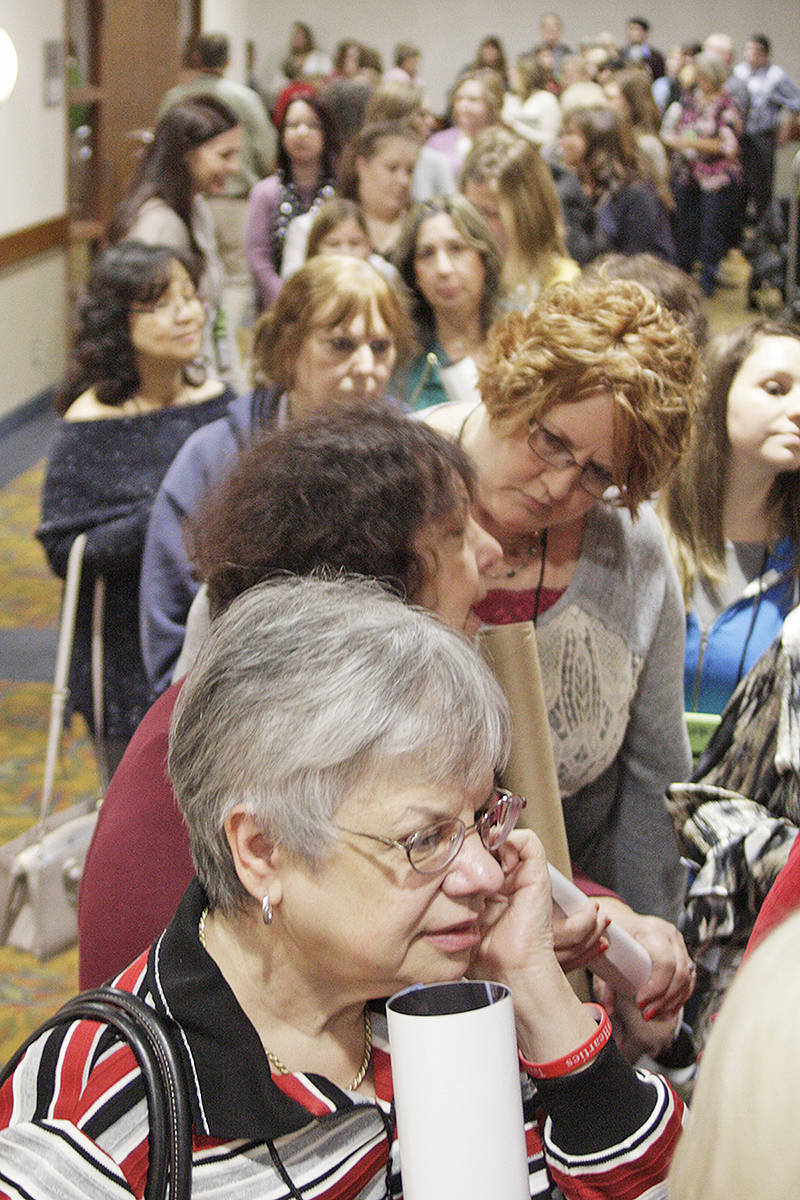 Hundreds of When Calls The Heart fans lined up at in the Cascades convention centre in Langley City for an opportunity to meet the stars of the Hallmark series face-to-face Saturday. Dan Ferguson Langley Times 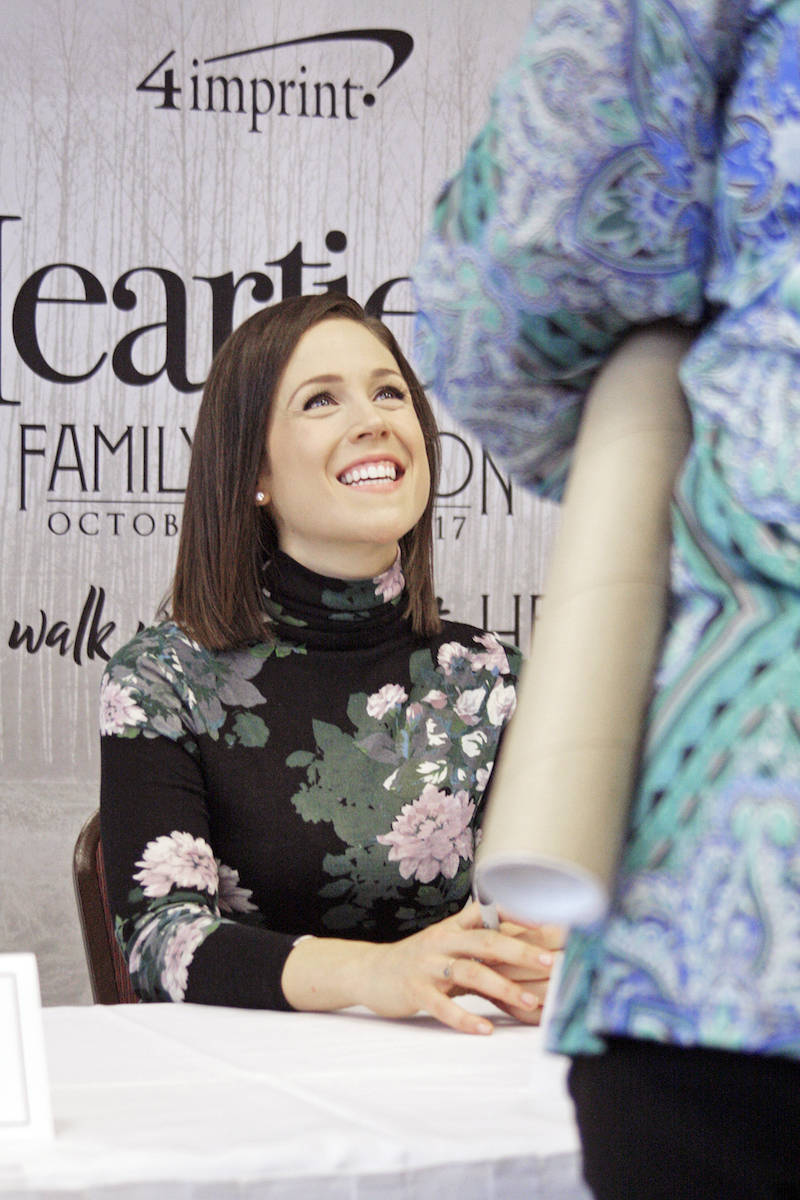 When Calls The Heart star Erin Krakow chats with a fan at the Saturday meet-and-greet for "Hearties" that preceded a Sunday set visit in Langley. Dan Ferguson Langley Times 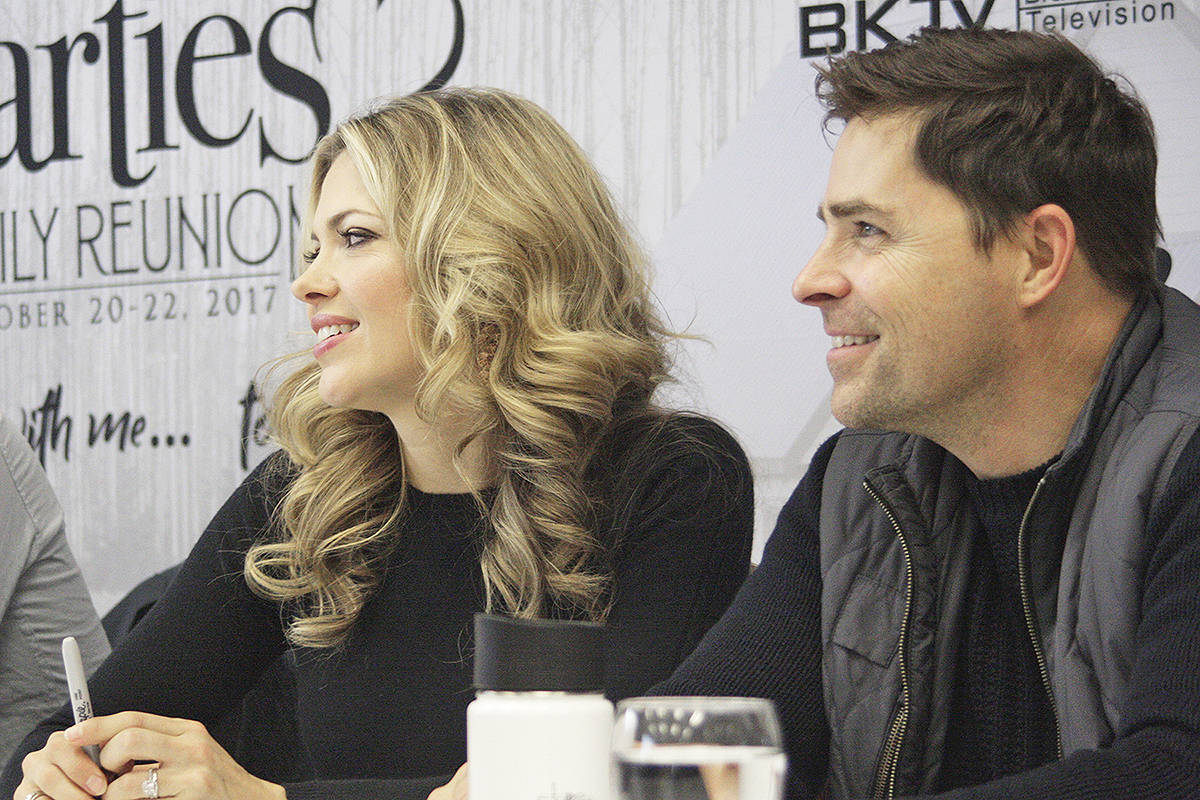 When Calls the Heart stars Pasquale Hutton and Kavan Smith posed for selfies and autographed posters for hundreds of fans Saturday at the Cascades in Langley City. Dan Ferguson Langley Times 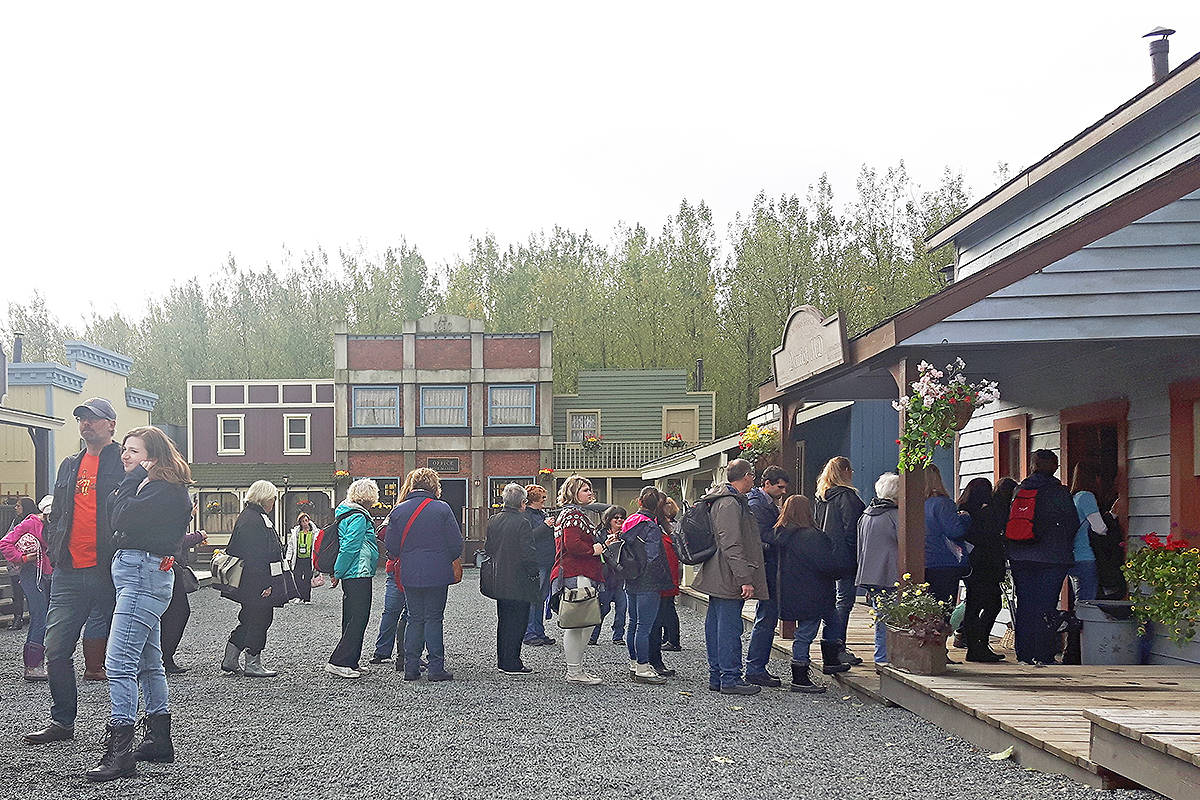 "Hearties" line up for a look inside one of the outdoor Langley sets of their favourite series. Dan Ferguson Langley Times