A new building under constructed in Fort Langley is set to be completed in April, but it’s not a permanent addition to the historic neighbourhood.

The partial building facade on the corner of Glover Road and Mary Avenue, which has been under construction for a little more than a week, will serve as a filming location for the second installment of the Sonic the Hedgehog movie.

The sequel to the 2020 live-action film, based on the video game franchise, is set to star James Marsden, Tika Sumpter, Jim Carrey, and Ben Schwartz as the voice of the blue hedgehog.

Local business owners are thrilled to welcome the production crew to the neighbourhood.

“We are definitely fans of the filming, and it creates a lot of local jobs,” said Katie Rempel, owner of Rempel Mercantile, located across the street from the film set.

Crew members have been great with communicating with businesses in the area and keeping them informed, Rempel added.

“We feel good about it; we think it’s great for the town,” she further enthused about the resumption of creative projects.

“They do spend a lot of money in town anytime they shoot here,” she said. “Just the fact that all these people are working and have a job… the movie industry was shut down [early last year], an awful lot of those people are B.C. people. They all had their mortgage to pay and food to buy, and yet no work. It’s just great to see people working.”

Production of the film began on March 15, according to director Jeff Flower. Video shared online claimed a chase scene from the Sonic movie was being filmed in Vancouver last week.

Shirley predicted filming in Fort Langley to begin in April. Although she expects construction of the Fort Langley set to continue for a few more days, she noted it won’t interrupt store hours.

“The stores will all be open for the weekend; it won’t interfere with weekend sales,” she said. “Weekends are best for merchants.”

“In 2019, the film and television industry contributed $3.2 billion to our provincial economy; with the sector overall – including interactive and digital media, motion picture, music and sound recording, as well as books and magazine publishing – employing a workforce of over 108,000 British Columbians,” a spokesperson with the Township told the Langley Advance Times. 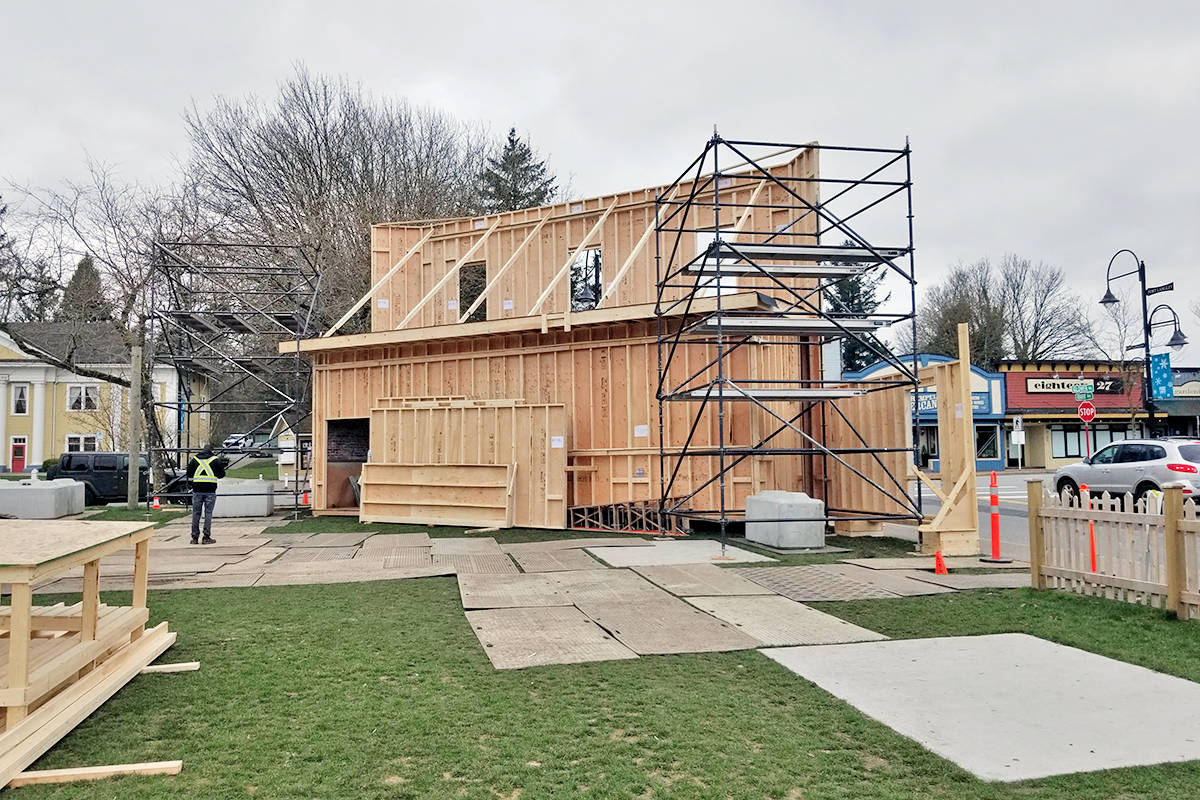 Rear view of building set going up in Fort Langley on Glover Road, seen here on Saturday, March 27, 2021, is being constructed for a film, Sonic the Hedgehog 2. (Dan Ferguson/Langley Advance Times)