A Langley dance school has created a fun video that allowed its students to do what they love — dance.

Owners Andrew McIntosh and Magdalena Rudzik have made the Dancing for Dessert Ballroom and Latin Dance Studio Christmas Dance Challenge.

The studio’s students of various ages and skill levels busted out their best moves. Those in bubbles were able to either dance safely in pairs in the studio while being filmed from a safe distance. Still others submitted dance videos from their homes.

There’s both solo and partnered dancing, as well as a few fun outtakes with Rudzik and McIntosh, intended to bring some holiday joy to dancers and viewers.

“It was a really fun project to do, and it has generated a lot of positive feedback,” said Rudzik. “Our students have said things like ‘thank you for making this Christmas a little brighter’, ‘this made my day’, ‘we watched it non-stop’, ‘that was amazing and brilliant’,’ what a great idea and feel-good project – it made me smile’.”

The project came together quickly and has been posted to the studio Facebook page. The studio owners pitched the idea to dance students at the beginning of the month, but the idea grew and evolved quickly.

“We also knew that some people might not be able to make or send us a video from home, so we came up with the idea of having an open house, sort of, where, with a donation to the Langley Food Bank, we would film the students in house. Students booked 15-minute sessions, one couple or person at a time to come in and do their dance on our ‘set’. The in-studio filming and editing was done over the course of seven days. After school, we would take the kids over to the studio where our son would do the filming of my husband and myself. They did get a little extra screen time during this project so they’re sad that the project is over and are asking when we’ll do another one!”

Rudzik said the dance challenge also ended up being a holiday family project.

“My son, Colbran [11] did the filming of our scenes and my nine-year-old daughter, Penelope, helped to look after our four-year-old son, Conrad,” she explained.

The business started as classes in the Total Fitness Gym and Willoughby Hall in 2005 with the married couple opening their own studio space in November 2009. Like any business based on group activity, Dancing for Dessert has been significantly impacted by COVID-19.

“We were completely shut down for six months and reopened with COVID protocols in place in September,” Rudzik said. “While we’ve still been allowed to teach private lessons, understandably, not as many people are interested in starting ballroom and Latin dance lessons at this time. We haven’t had nearly the same number of people preparing for their wedding dance calling in. We’ve had to reduce our group class and dance practice sizes to about one third to allow for social distancing.”

The studio’s Zumba classes have gone virtual and with recent spike in cases, all group activities are on hold again.

Rudzik said the virus has meant the loss of the social aspect of dancing, one of the things participants enjoy the most.

“But there have been some positives, it’s forced us to be creative in how we run our studio. We created a new dance class called “LET’S DANCE!” for people to come in and dance without a partner, (limited numbers and socially distanced of course!),” she said.

This is a hybrid class of a dance class, Zumba, line dancing, ballroom and Latin routines meant to give participants an opportunity to get out of the house, dance, and have some fun and exercise. This video was another fun, creative, result of the restrictions.

“What’s been really wonderful as well is that we’ve found out how incredibly supportive our dance community is and how important dance is to people, for their health, sanity, and friendships,” Rudzik said. “It’s been a reminder actually of why we do what we do and why we love our job.”

Now that there’s vaccines and they are being rolled out in the coming months, the owners look forward to the gradual return to normal.

“But it will be really nice when people can connect with each other through dance again without being afraid or without the worry,” she commented. “Our school is a social dance school with a great community and our students will be ecstatic when they can see each other again on the dance floor and I bet there will be a lot of hugs going round when this is all over.” 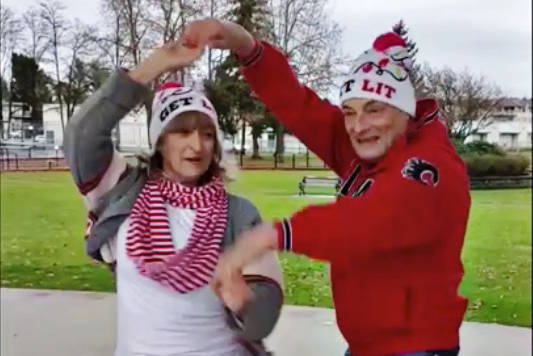 People taking part in the Christmas Dance Challenge could submit videos, such as this one filmed at Douglas Park, or book sessions at the Dancing for Dessert studio. (Screen grab) 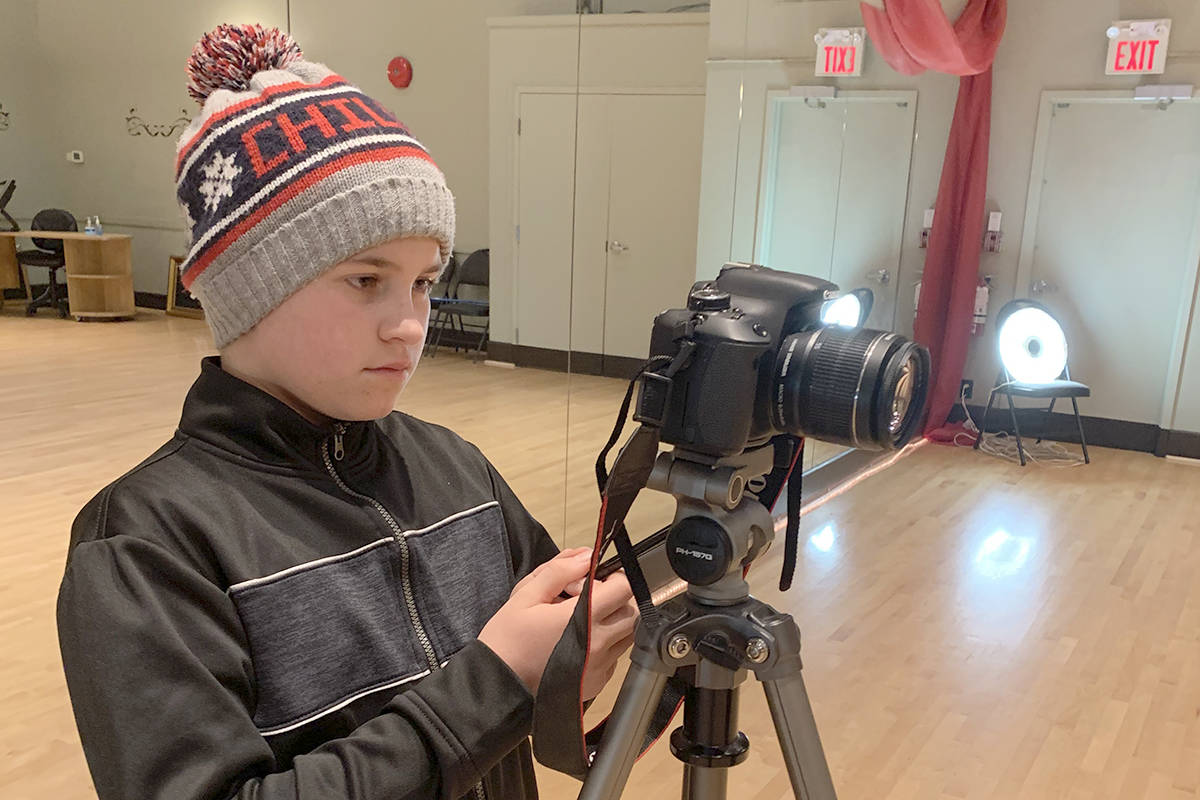 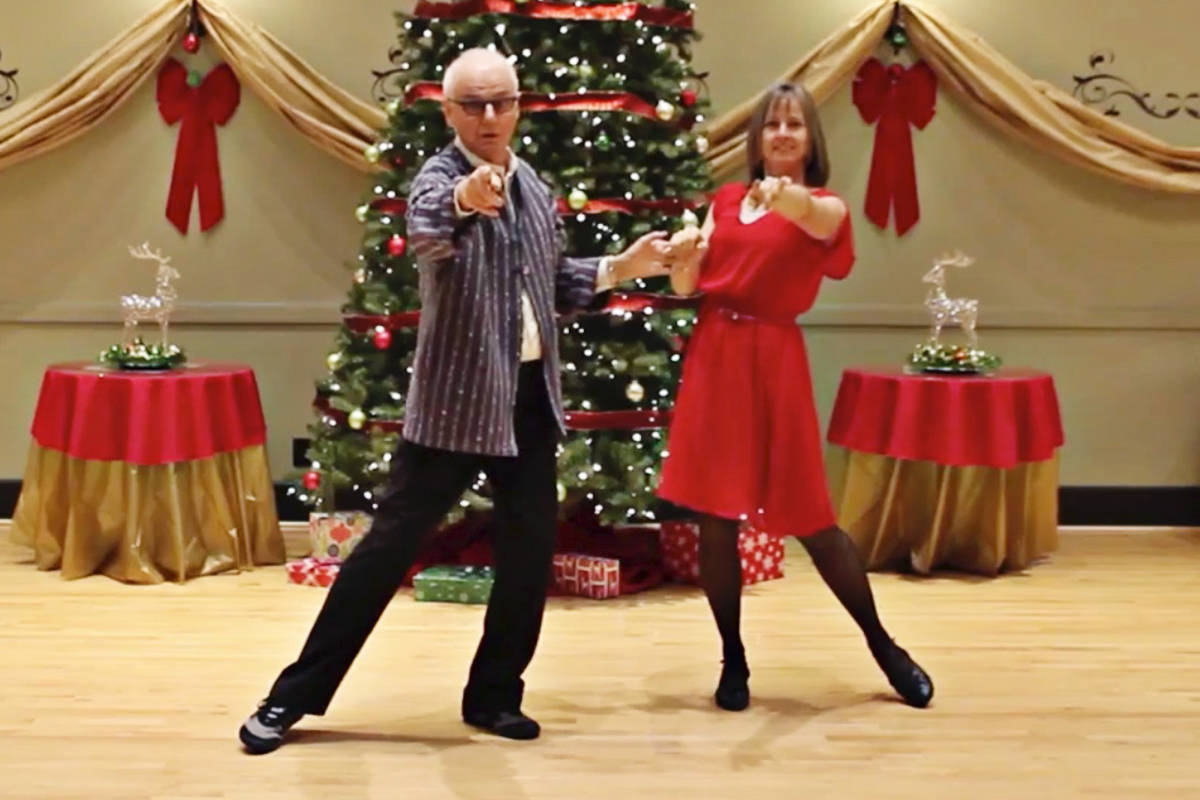