You never know what’s down the next hall. For Grade 4 student Ava Stumph, it was a lead role in the Langley Senior Secondary production of Chitty Chitty Bang Bang.

The Maple Ridge girl was in Langley with her family while her sister was busy with volleyball.

“We walked down the drama hall [at Langley Secondary] and Ms. Piorecky told us about the play, so we were thinking about coming back [for the audition],” she said.

Those staging the musical thought she aced the audition for the part of Jemima Potts, but Ava didn’t think she did very well.

“My dad told me they didn’t need me back… he was trying to trick me… then he told me ‘You got the part’.”

Ava has taken part in performing arts before in Maple Ridge and has been brought to Langley by her parents for the LSS role.

“Her father, an alumni of LSS, was very supportive of this experience. She came to auditions and has fit the role splendidly,” teacher Khaila Piorecky said.

But Ava is not seeing stars and dreaming of a life in entertainment. She sees her future elsewhere.

“I want to be an architect,” she said.

The school needed a couple of young performers to round out the Chitty Chitty cast, which features 50 performers accompanied by a 23-piece orchestra of community members and students. Most in the show are from LSS, but the students ranging from Grade 4 to 12.

“We are excited to feature a fantastic car loaned to the school by Theatre in the Country, as well as an array of sets and props created by our cast and community members, as well as the trades students at LSS,” said Patti Thorpe, the music director.

Chitty Chitty Bang Bang the stage show is based on the 1968 movie of the same name.

It’s the tale of eccentric inventor Caractacus Potts, and his family, including his father and his children, Jemima and Jeremy. The children meet Truly Scrumptious, a woman who falls for their widowed father.

Caractacus promised the children he would buy and fix an old scrap car. He more than fixes it, he makes it able to fly.

The evil Baron Bomburst wants it for himself and is aided by his wife, the Baroness.

“It’s his birthday so as my treat, I’m trying to get that for him,” said Sara Olivia, the Grade 12 student who portrays the Baroness.

“I think my character, the Baron, is very much a child, and he loves toys and he views Chitty, the car, as the greatest toy,” said Tia Revelstoke, the Grade 11 student who brings Baron Bomburst to the stage. “His main objective is to steal that car for his own pleasure.”

The show is suitable for all ages. Tickets are $10 for seniors and students and $12 for adults. They can be purchased online at sd35.schoolcashonline.com or reserved by emailing LSSMusicaltheatre@gmail.com. Another option is to call the box office at 604-534-4171 ext. 743 and make arrangements. 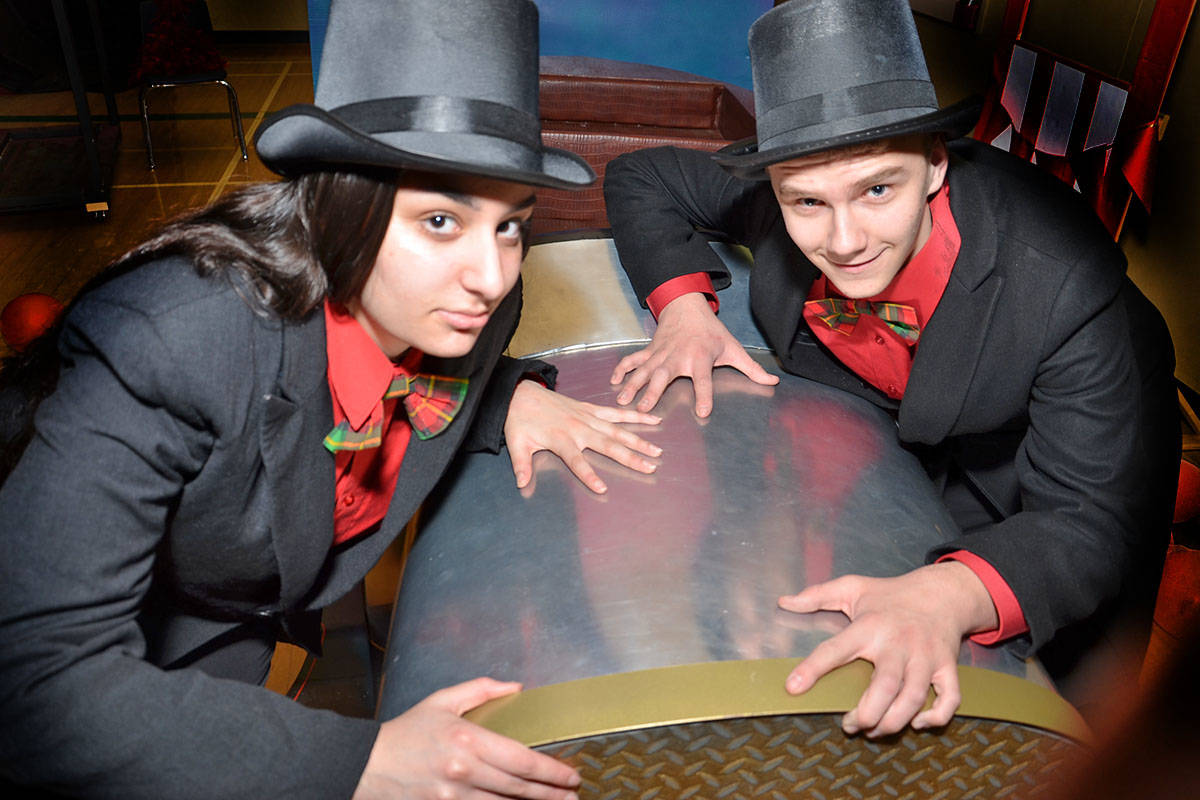 Goran the Spy (Shelby Keen) and Boris the Spy (Dakota Hutchins) are foiled in their attempts to steal the car in the LSS production. (Heather Colpitts/Langley Advance) 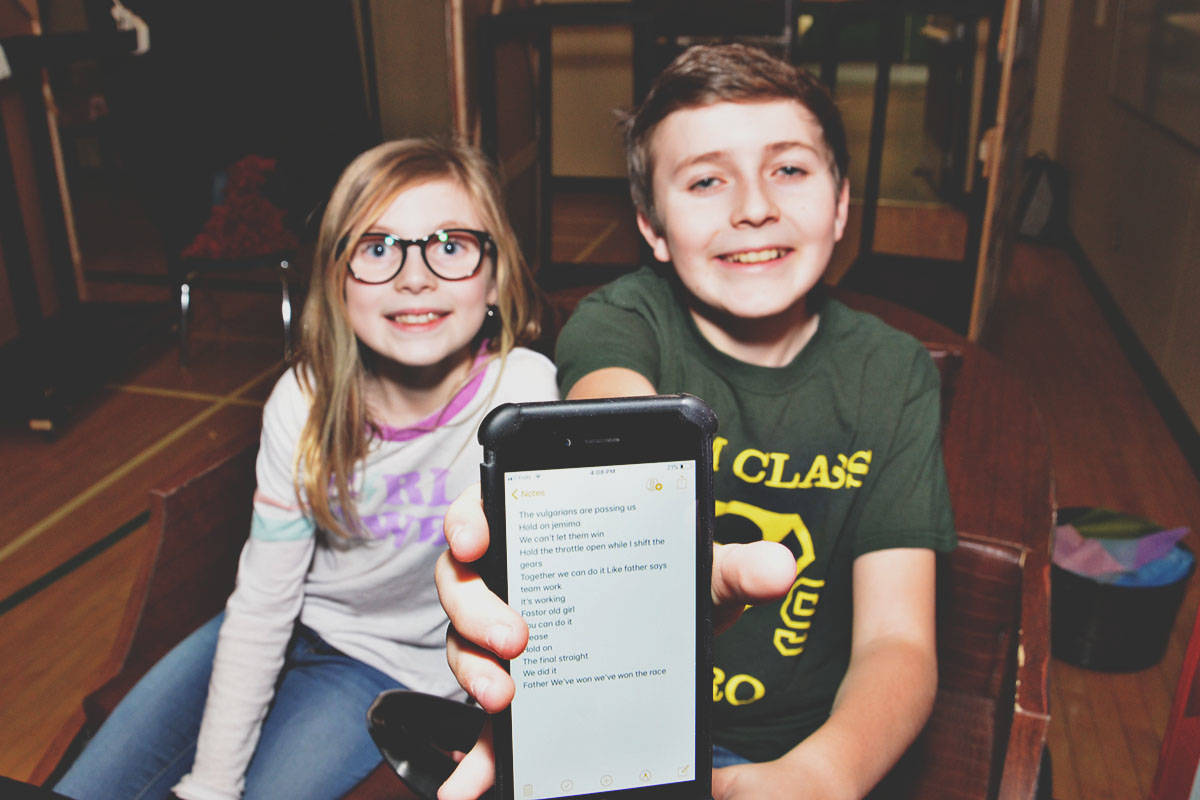 Ava Stumph and Markus Blessing portray the Potts children. Markus, Grade 9, has his script on his cellphone so he can run lines anytime. (Heather Colpitts/Langley Advance) 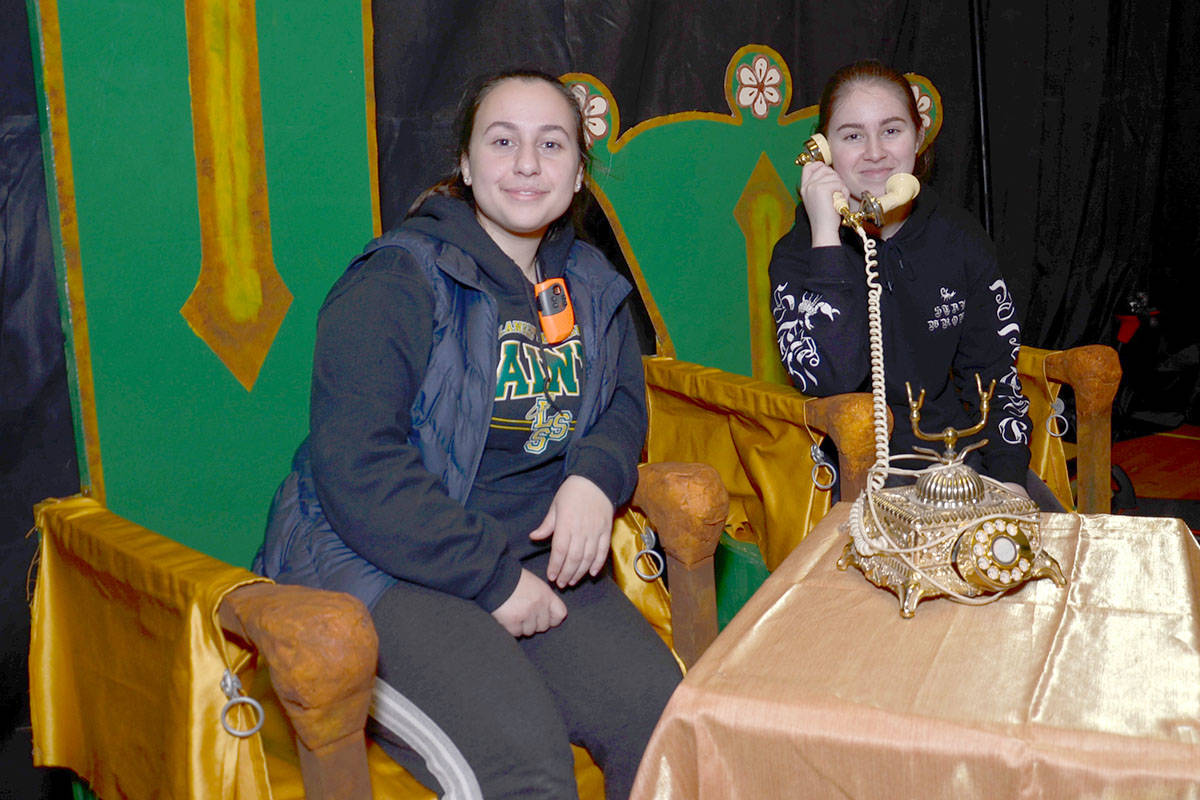 Grade 10 students Elta Raci and Adelina Konjuhi are some of the crew members who ensure sets and props are where they need to be when they need to be. (Heather Colpitts/Langley Advance) 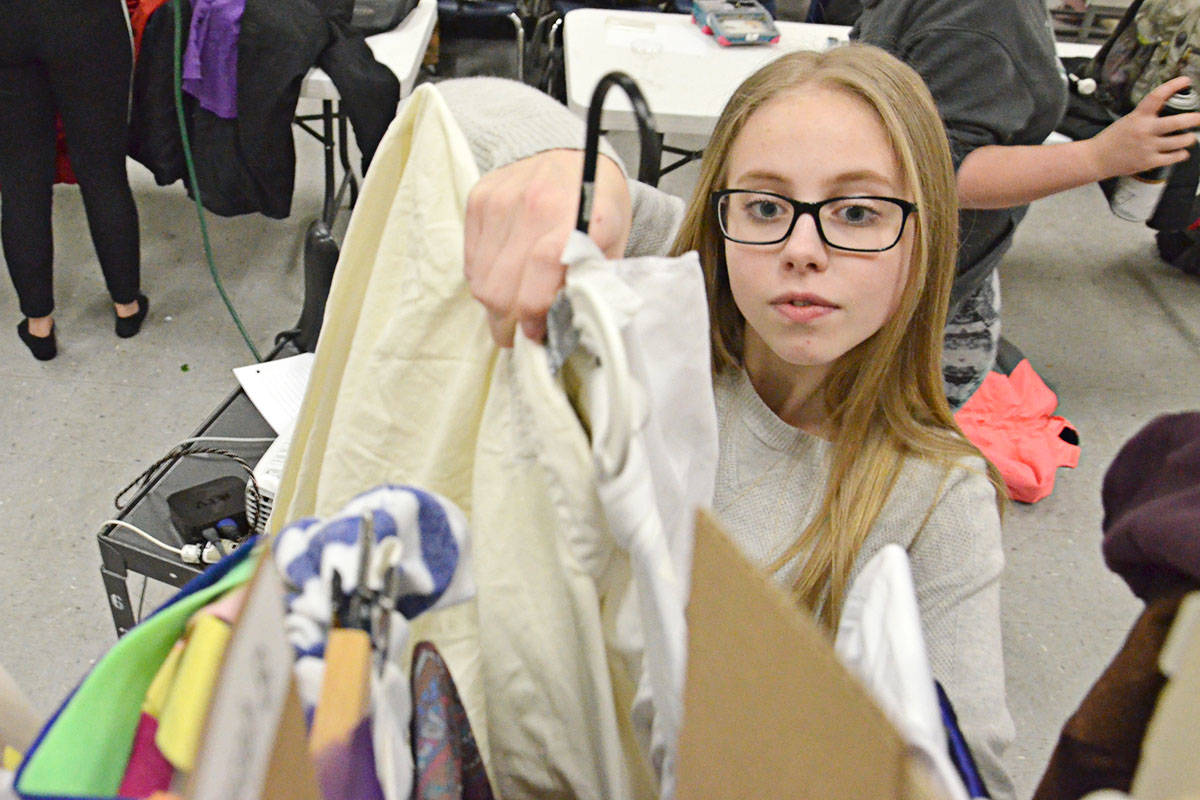 Sasha Neumann, Grade 11, will portray three different people as well as a tree during the course of the show, requiring cquick costume changes. (Heather Colpitts/Langley Advance) 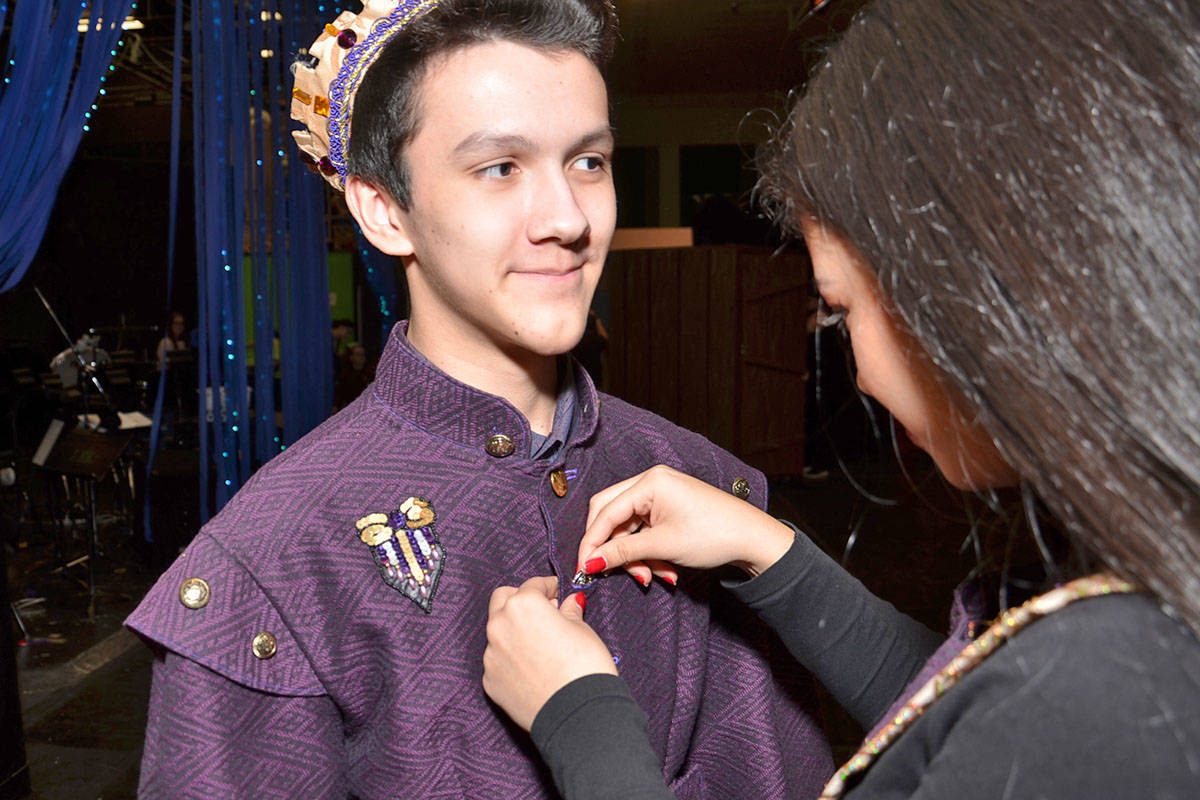 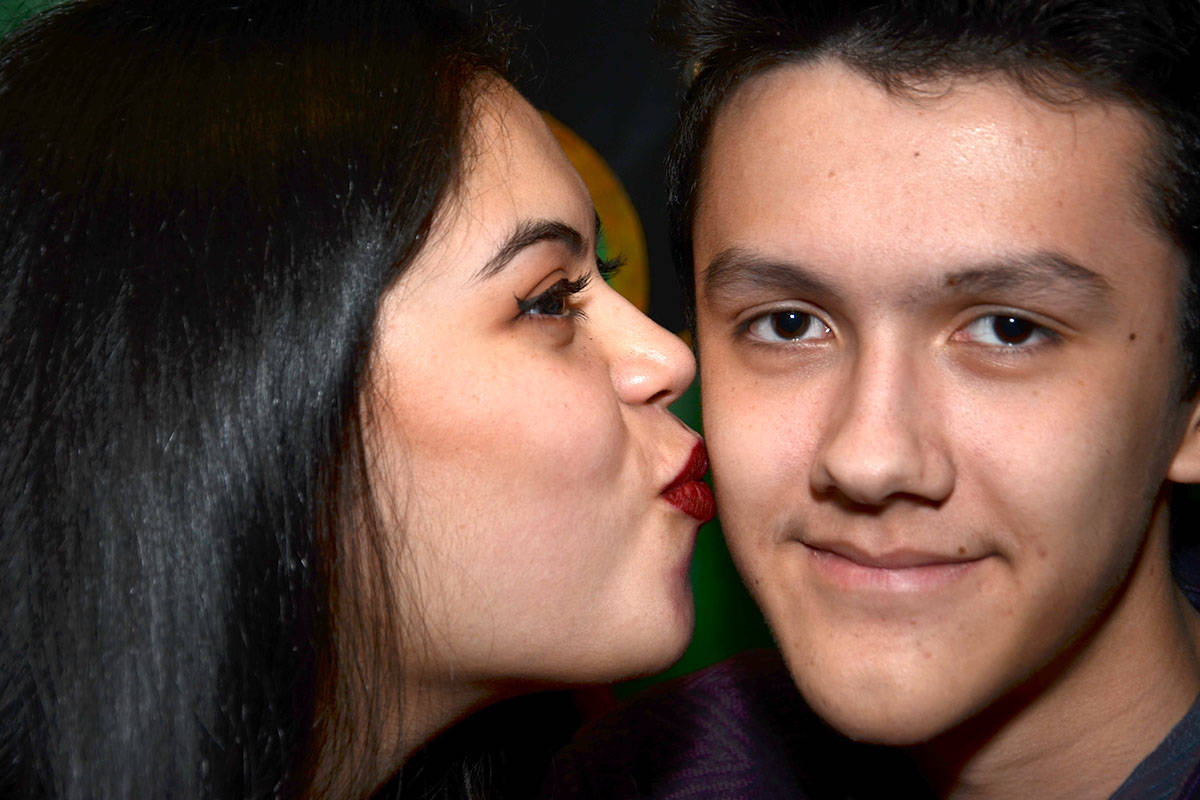 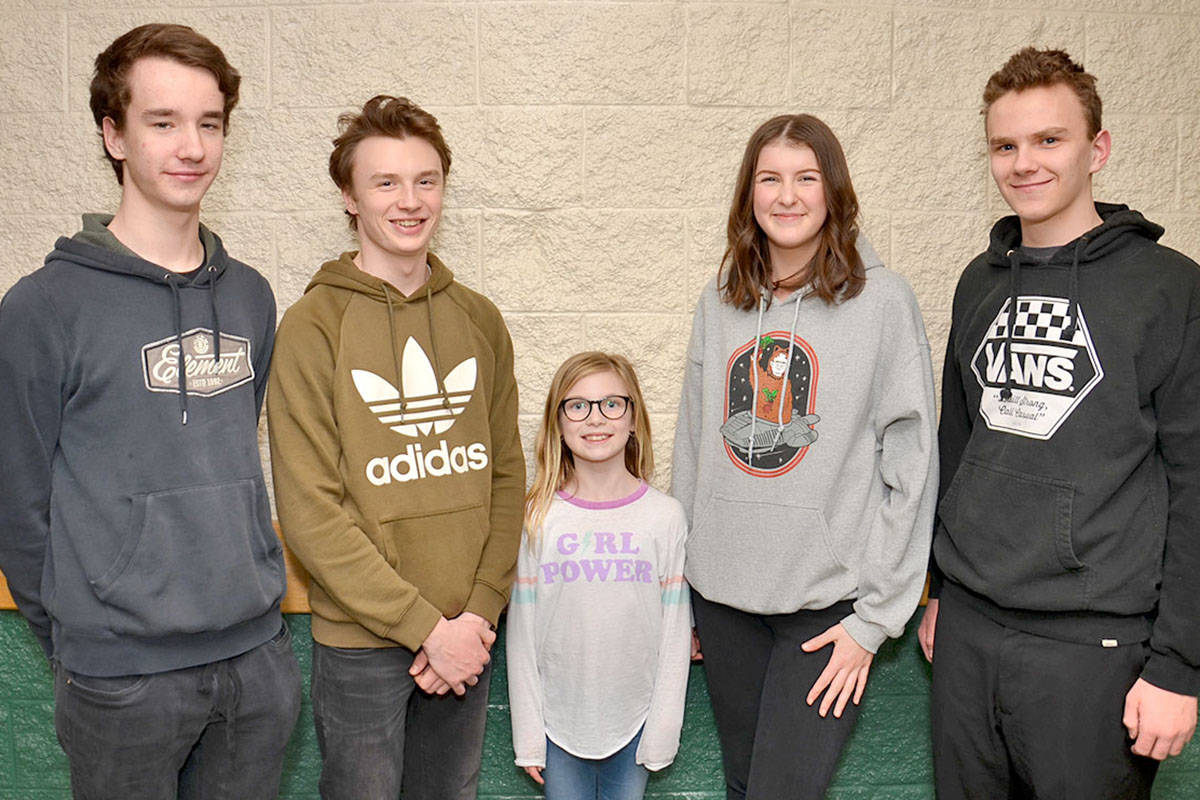 Hedley returns to the stage with no apologies