Before a crowd of roughly 650 at the Hard Rock Casino, it was former Langleyite Aaron Pritchett – along with the Vancouver-based Washboard Union – that “cleaned up per usual” at the BC Country Music Association’s 42nd annual awards, announced president Linda Corscadden.

Pritchett –who left Langley a few years ago, scooped up male artists, fans choice, single, video, and interactive artist of the year awards.

Also of note for Langley, Gabby’s Country Cabaret once again was crowned the country venue of the year, while another local business – Long & McQuade – received the distinguished president’s citation.

This award, not necessarily given out each year, is presented to groups, companies, or individuals who goes above and beyond for the industry and the BCCMA, Corscadden explained.

“Long & McQuade has been involved with the BCCMA and has donated the back line for pretty much any and all events that we ever do, without a blink of an eye, so I wanted to make sure Kyle Radomski and Mike McDermott from Langley Long & McQuade were recognized,” she said. “Well overdue.”

Host with the “most”

Standing back stage in the dark, reading queue cards with nothing more than the light of her cellphone, and discussing with Pope what was coming up next, Batten didn’t even realize the presentation of the female artist of the year category was currently underway.

It was probably a good thing that she was busy and distracted from thinking about the award, Batten admitted. Having attended or been involved with the awards for the past 19 years, she felt being busy with her host duties was an advantage. It prevented her nerves from getting the better of her.

“I’ve got to tell you, every year it comes as a shock. There are so many incredible artists up for this award, and I’m always humbled just to be nominated.”

“I’m just so grateful to all the people who listen to my music and believe in me, and love the music I’m making,” Batten told the Langley Advance.

Insisting accolades must be shared with her family, her band, her friends, and her distributors – but most of all her fans – she said it’s a huge team effort.

In addition to hosting the event and receiving a few awards herself, about three-quarters of the way through the show Batten took to the stage and performed the Amanda Marshall cover Let It Rain, bringing the crowd to its feet.

Corscadden, who’s another former Langley resident, was also recognized as the Don Adams country music person of the year and lauded – along with Batten and Agassiz’s Todd Richard – for their efforts in organizing last July’s fire relief fundraiser that generated $13,600 for the Boston Flats area and the 100-Mile haulers.

Batten admits she almost missed being right of stage for the humanitarian awards component, too.

Between costume and wig changes, skits, and other general hosting duties, Batten ran up and down a flight of stairs at least 30 times through the night from the stage to the green room.

Thankfully her “best bud” was in the audience and texted her a friendly nudging reminder that she was a nominee for the next category, and she once again bolted up the stairs faster than she knew possible.

Batten had also been nominated for the humanitarian award in past, for a fundraiser she held to aid residents effected by the Paddington Station condo fire in downtown Langley.

“It’s a pretty surreal award,” she said. “I feel like as humans and as a society, it’s in our blood to give back when people are hurting or in need… That’s all I did… We don’t do these things to get an award … You see an immediate need and your heart says ‘let’s go’.”

This really was a family effort – the country music family – said Batten, who noted that any time she goes out asking for help, everyone in the country music industry – directly or indirectly – is quick to give.

“I don’t think I’ve ever heard a ‘no,’ and that’s what makes this organization, this industry so special… it’s one big family.”

“The family is growing and it’s amazing. I’m so proud of the growth and development from all of the artists musicians and industry members. The support is truly like no other. It’s not a competition, it’s everyone in the industry supporting one another and cheering each other on and celebrating the person that wins.”

Also from the Clayton area is Stephano Barberis who was lauded for the 19th year running as video director of the year.

“I always say this year was the best yet,” Corscadden said. But she thinks the Sunday night ceremony topped all past events.

“Oh my goodness it was a hoot,” she concluded, commending Batten and Pope for hosting the show.

“It was an amazing night I’m very proud of each and every nominees and winner, and I can’t wait for next year,” Corscadden said. 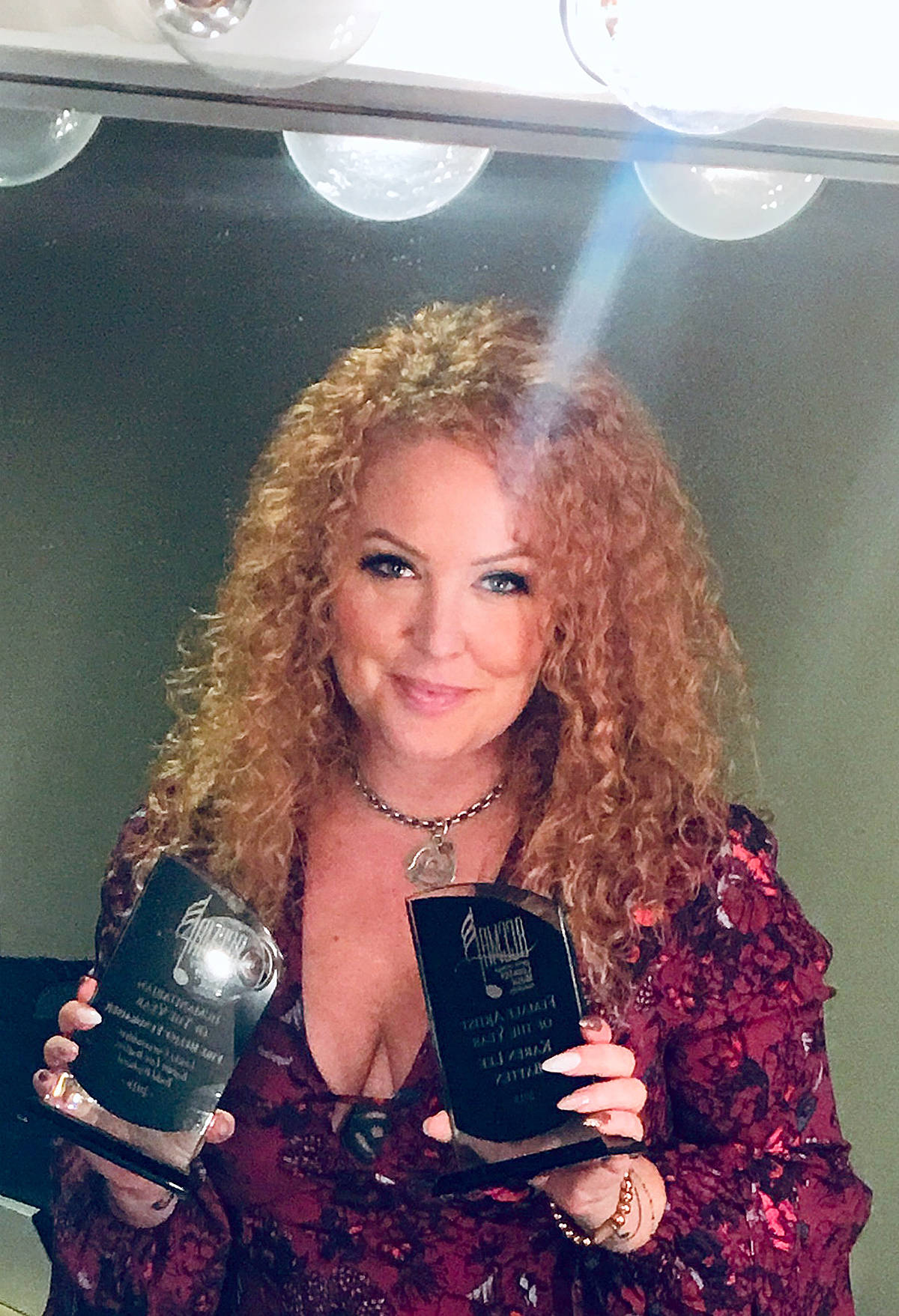 Karen Lee Batten, a Willoughby musician, was crowned female vocalist of the year for the seventh time during Sunday’s BCCMA awards night – an event which she also co-hosted. (Special to the Langley Advance) 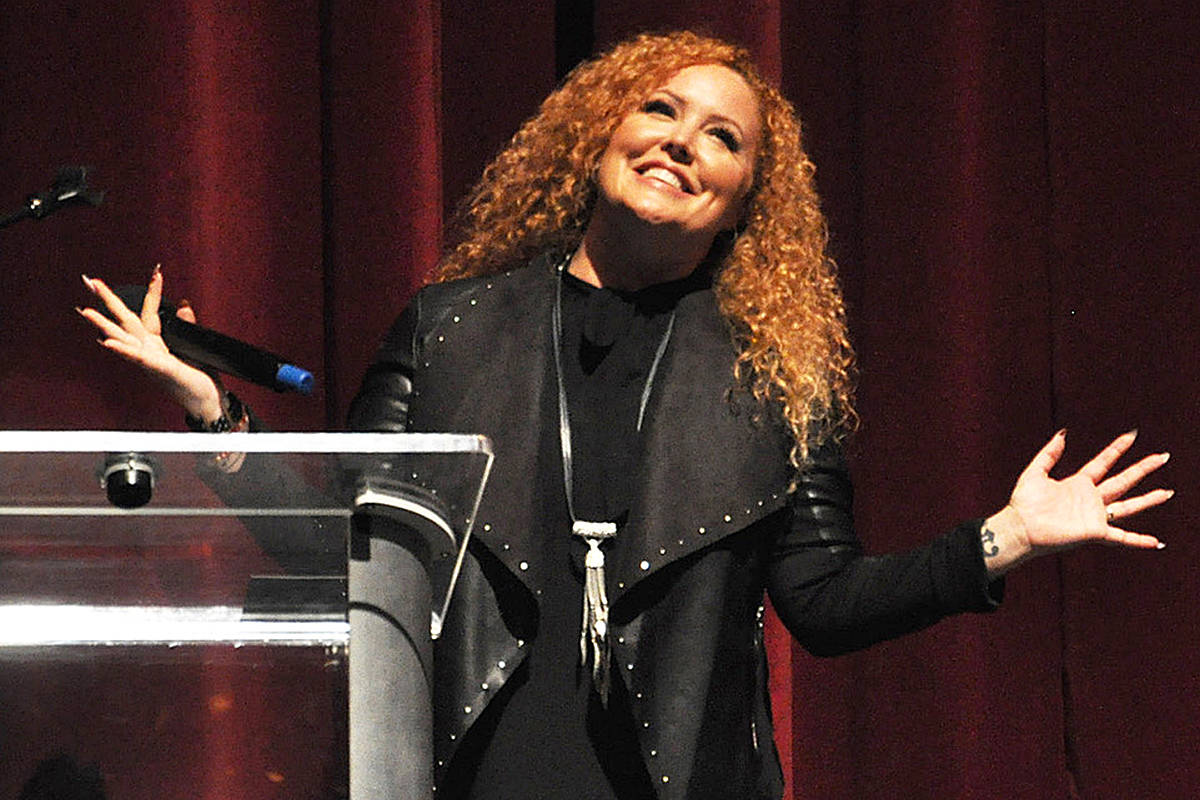