At age 22, Joseph Odin was on a landing ship tank (LST) off the coast of German-occupied France, trying to get as many Canadian soldiers as possible onto Juno Beach.

One of the vivid memories of that historic Second World War battle in June 1944 was manoeuvres Odin and the rest of the LST team would take while under fire.

Dropping anchor a few hundred yards off shore, then going full speed towards land, they’d get as far onto the beach as possible, load off troops, then pull back out into the water as fast as they could by reversing the anchor winch.

At age 95 now, Odin’s recollections of those times are rather limited, but he has shared them with his son, Wayne, who retold the story after his father, who served with the Royal Canadian Navy, was decorated last week with one of Frances’ highest honours.

“He did mention one time, they were doing this manouvre [when] the ship did strike a mine in the water, causing the stern of the ship to lift out of the water. [Suffering] no real damage to the ship, they returned for more troops,” Wayne recounted.

During a special ceremony at Chartwell’s Langley Gardens in Walnut Grove last Wednesday, the French Legion of Honour was bestowed on Odin.

“I really don’t think he realizes the magnitude of this honour,” said Wayne.

The son was on hand, with Odin’s 94-year-old wife of 72 years, Helen, for the presentation.

“He did say that it was nice,” though, Wayne said, recounting his father’s reaction following the presentation.

This award actually does hold even more special significance for the Odin family, his son elaborated. One of Odin’s grandson, 32-year-old Johnathon Guendouz, is currently serving as a captain in the French Foreign Legion.

The only other honour given to Odin was the distinguished service award presented for his efforts in the navy during the Second World War.

His actions, manning a landing craft on D-Day at Juno Beach, helped lead to the liberation of France. It had an enormous impact on the country and other nations around the world, said Langley-Aldergrove Member of Parliament Mark Warawa, who was joined by Township of Langley Mayor Jack Froese, in helping present the award to Odin.

Immediately after the war, Odin returned back to New Westminster (where he was born in 1922), and went to work first at Fraser Mills sawmill in Coquitlam and later as a tradesman for the New Westminster school district.

Odins have three children, Wayne, a brother in Maple Ridge, and a sister in France. They also have eight grandchildren, and nine great-grandchildren.

He retired from the school district, but Wayne recounted, how his father was too bored to stick with retirement and went back to work – again as a tradesman – for Kwantlen College for several more years.

Two and a half years ago, Odin and his wife decided to downsize and move closer to family, opting to relocate from White Rock to Langley Gardens. 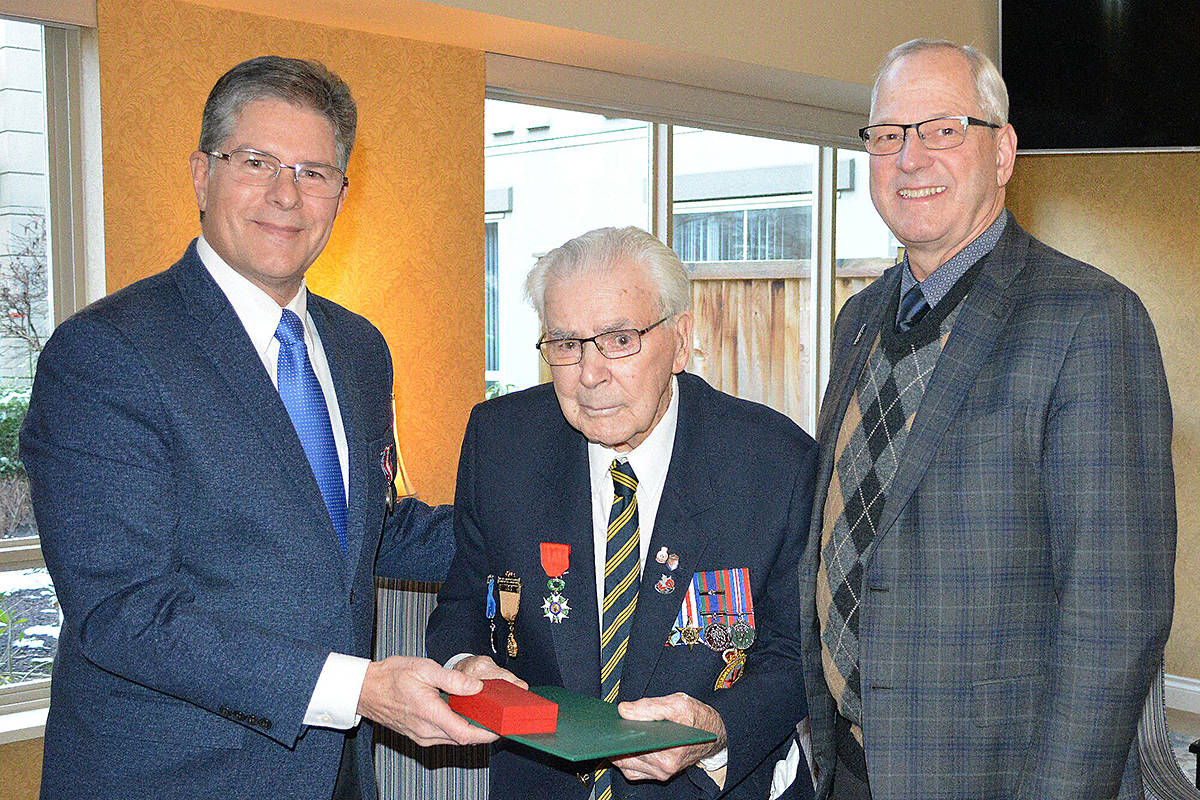 MP Mark Warawa and Township Mayor Jack Froese were on hand to present Joe Odin with the French Legion of Honour. (Special to the Langley Advance)