The gym rat with the mullet.

The girl who hung out at the smoke pit.

The nerdy girl who tried to have friends in every clique.

The wannabe preppy who loved sports but felt like a wallflower for much of high school.

They’re not part of a remake of the coming of age movie The Breakfast Club.

They and the rest of the community have reason to celebrate, and will do so on Saturday to mark the school’s 60th anniversary. Events run 11 a.m. to 4 p.m. with a special First Nations art unveiling, an alumni basketball game at 3 p.m., tours, historical displays and more. Everyone is invited.

We missed #throwbackthursday so here’s our #fallbackfriday. On the right is Betty Granholm, holding our Totem in 1958. On May 12 Betty will present the school with a piece of Totems history at our Anniversary event. #acsstotems #60yearsoftotems pic.twitter.com/1nVnW90B32

Katie Caines graduated in 1995 and started working at the school in 2015.

“And when I was in Grade 12, you couldn’t get me out of here fast enough – just like our current Grade 12s – yet here I am, back again,” she chuckled.

She ended up working with people who taught her years before.

“But when I started teaching here, I was shocked how many people were still working at the school that were teaching when I was a student. We had a big retirement last year, but there’s still four or so that are here from the ‘90s,” Caines noted.

Today, the ACSS building, which had a major renovation in the 1990s, seems much brighter to former student Kim Haber, a PHE/AVID teacher who graduated in 1992 and started working there in 2006.

Another big difference Haber and Caines have seen is a shift in learning.

“The curriculum is more varied and teaching methodologies are much more student centred. As a student, I really remember most of my classes being teacher-centred/worksheet based,” Haber noted. “There is a much larger population of International students now. When I was a student there might have been one or two exchange students, who always seemed to have celebrity status, and now there are so many more.”

Caines said the focus is more on learning and understanding. She credits Mr. Antil’s Honours English and Literature class for helping her determine her career path which was not an easy one.

“He made learning about the old dead literary guys fun. And what other class could you get candy for reading out your top 10 lists at 9 a.m.? Once I knew I wanted to be a teacher, I had to figure out how to do it and I knew my parents couldn’t afford to put me through university, so I took a year off to figure it out. A year turned into two, and two turned into a lot more. I finally went back to school full time after my twin daughters were born seven years later. My goal was to be finished my Bachelors of Education before they were in kindergarten and I pulled it off; a full time student and a full time single mom. I always tell my students anything is possible if you really want it.”

Memories from young adulthood stay with a person for life. Haber recalls the singing and chatter on the school bus rides, the ache for young people to be unique but to also feel they belong, walking to nearby stores and fast food joints in droves and hanging out in the change rooms to avoid class.

But most of all she remembers teachers who helped set the direction of her life.

“I think I knew I wanted to teach Physical Education from a young age,” Haber said. “I always loved PE as a student. I had an inspiring Grade 5 teacher, Mr. Mercer, who started me thinking about it. My parents took me to a Physical Education open house at UBC when I was in Grade 6, which I really enjoyed. Louise Chesley taught me Phys. Ed for three years at Aldergrove; I really respected her and how she went about teaching.”

Shawna Urban, who graduated in 1990 and is a special education assistant, has kept it all in the family.

“I now work here, my sisters also graduated from here and one [Wendy Potter] works here as well,” Urban said. “Plus my son went here and graduated and now my daughter is too. It definitely is a hoot when your teacher that taught you, now teaches your kids.”

That inter-connectedness is part of growing up in a smaller community but it’s not always welcomed by young people who realize the adults around them tend to know their business.

Urban decided to become an SEA once her kids were in school.

“I loved the school environment from the staff to the kids,” Urban said.

Wendy Potter graduated from ACSS in 1999 and started working there in 2001. She’s now the team lead with the Pacific Community Resources Society’s prevention and health promotion program – in short, a drug and alcohol counsellor.

“I knew I wanted to support youth to make healthier choices for themselves,” said Potter. I was undecided on becoming a child and youth care worker, social worker or counsellor. I was influenced by my connection to a youth counsellor who worked at the school during my time here.”

She was there at a time when the school housed 1,100 students. The biggest change she’s seen is probably the name. It used to be ASS (Aldergrove Secondary School). That and technology.

“The biggest changes I have seen are around technology both in learning and as a social medium,” Potter said.

She’s been around long enough to see trends come back.

“Fashion is a funny thing. It seems to cycle through. Many of the styles popular when I went to school here have made a reappearance,” Potter said. “It is interesting to see how much things change yet stay the same.”

For all the fancy technology people carry around in their pockets, modern students are still kids attending school for about half of their waking hours each weekday.

These former students see that kids today still have the same needs – “Just the need to connect and belong. The groups and cliques and how they interact with each other,” Potter said.

Teacher Zach Dahl said relationships between the students are still similar to when he was young.

“They still want to be close to their friends, forming their little groups which leads to the same drama that I remember from when I was a student,” he said.

Dahl was sporty in school but also in band and French Immersion. He graduated in 2005 and started at the school in 2016. Now back as a PE and math teacher, he originally had planned on engineering but after a couple of years at university, decided to become a teacher.

“Teaching combines two of my passions which are working with numbers and helping youth transition into successful young adults,” Dahl said.

Jeremy Lyndon was looking at a few career options – teaching, sports medicine, psychiatry and counselling – after graduating in 1998.

“I first started working at the school as a youth worker and community schools worker in the early 2000s. In 2006 I taught at ACSS for one semester. In September 2016, I returned as vice principal. In January 2017, I became principal,” he said.

“Our students are awesome at helping to build community at ACSS. Everyone wants a place to belong and to be proud of their school,” Lyndon said.

But a lesson for young people in the school now – the teachers know all the tricks because they used to pull them.

“They take ‘extended lunch breaks’ to McDonald’s. All. The. Time. We used to do that,” Caines said. “Sometimes we would ‘make a run for the border’ and hit up the dairy for ice cream and make it back only a few minutes late for class after lunch. The seniors spend a ridiculous amount of time in the parking lot and I remember doing that, too. They try to bribe us with coffee and donuts if they’re late to class. It doesn’t work… usually. They’re trying to balance school and work and having a social life. I remember going to school and then having to rush home to get to work at McDonald’s on time, and still wanting to hang out with my friends. They all argue, they fight, they have teenage drama. We had all of that. They’ve just got the added stress of social media that doesn’t let them get away from it.”

Our second #ThrowbackThursday is from 1982 and lunch time intramurals! Pillow fights on the balance beam! #acsstotems #60yearsoftotems pic.twitter.com/Ns4Gj0NEOm 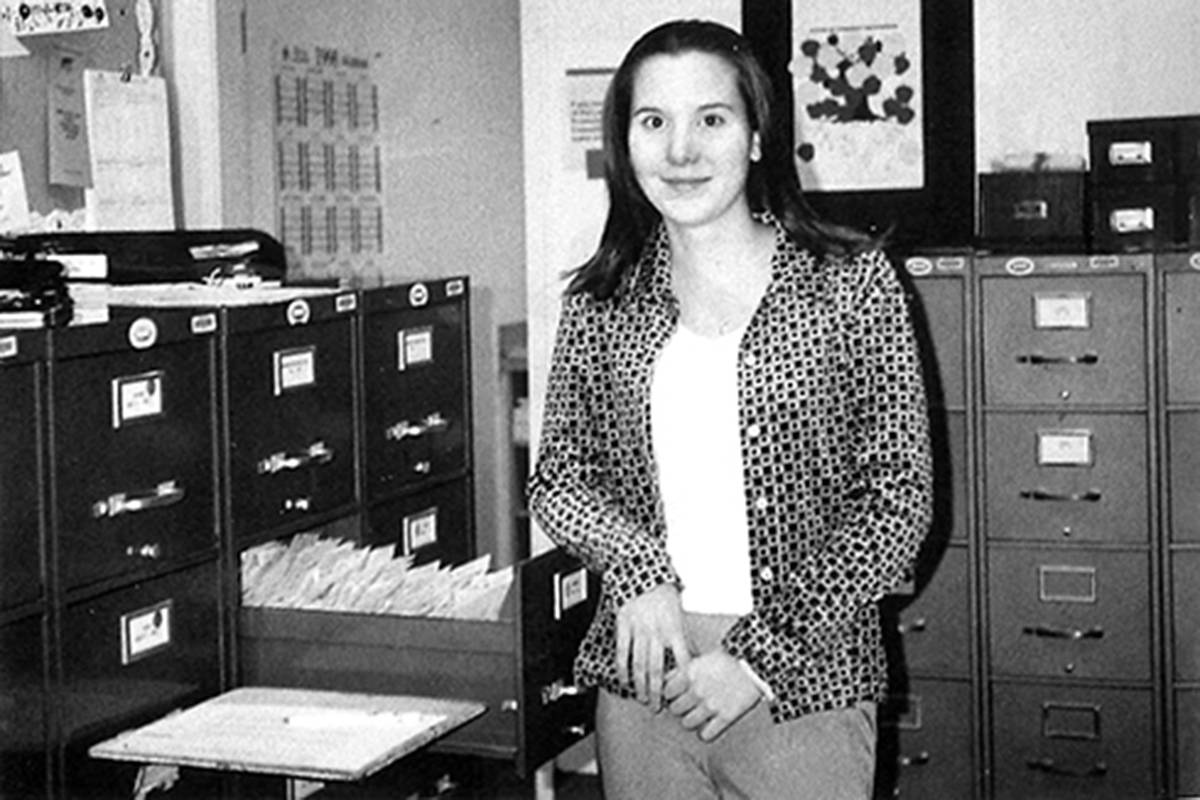 Wendy Potter back in the day. 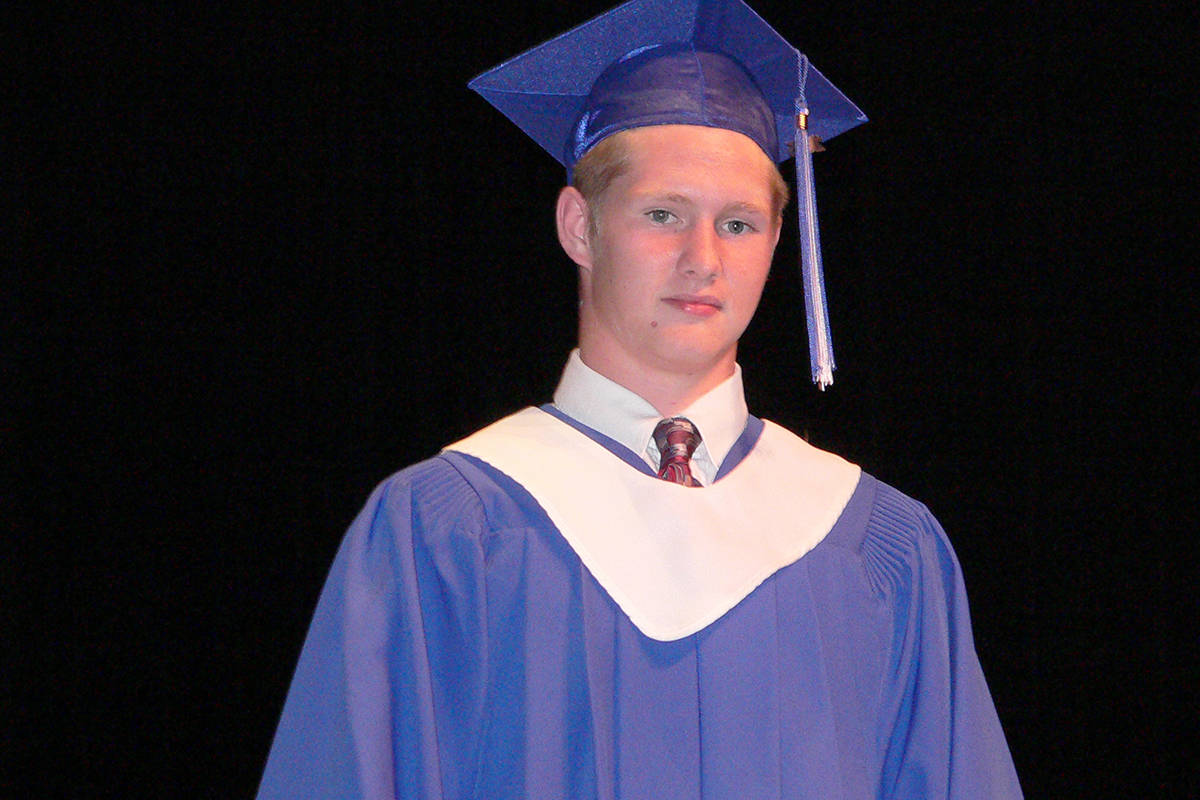 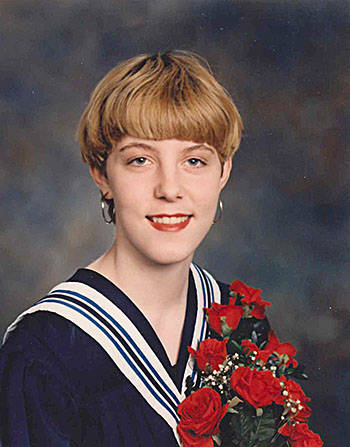 This ACSS grad is now the school’s librarian, Katie Caines. 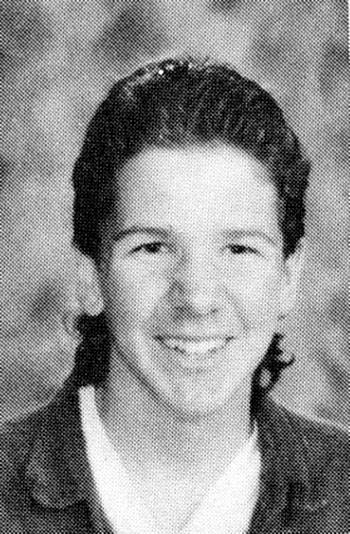 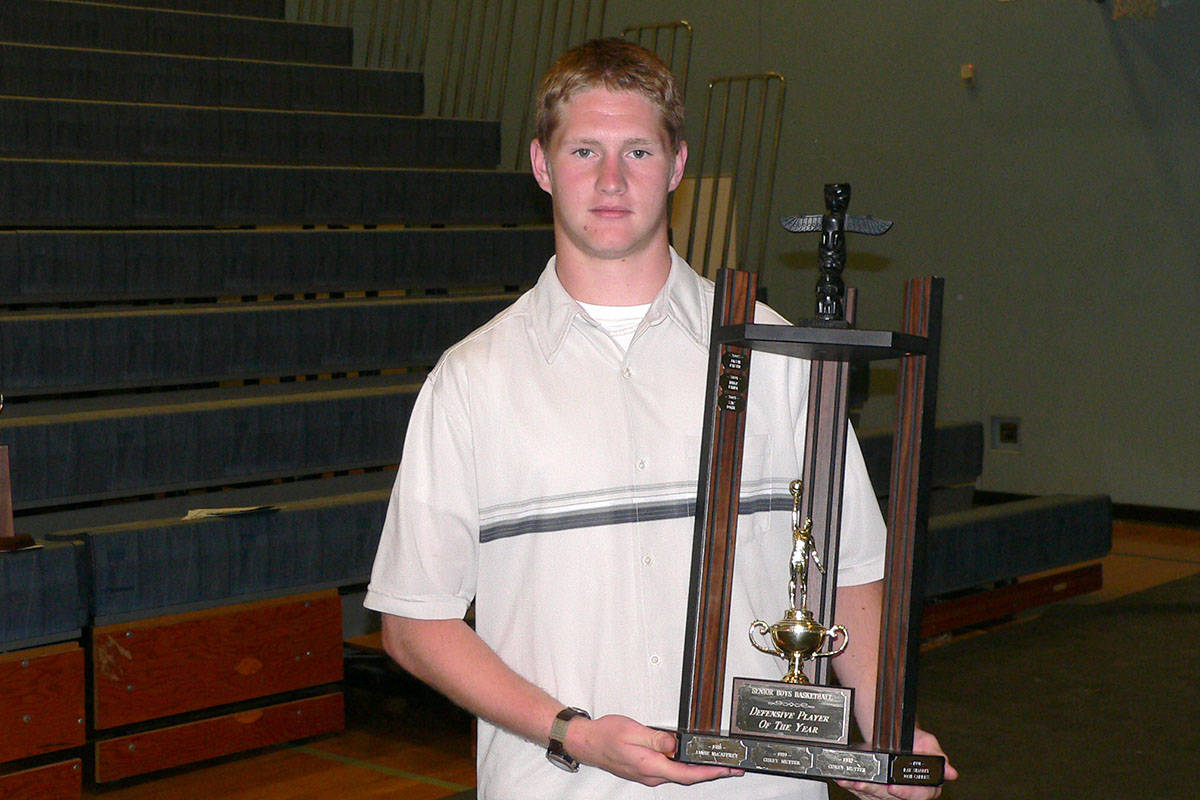 Zach Dahl received an athletic award when he was a student at Aldergrove Community Secondary. Now he teaches there.

More news about Langley’s ER is coming May 28