Thinking outside the box is taking education outside of the school at Langley Meadows Elementary.

Kids at the school will be able to learn, play, and commune with nature in the school’s new outdoor classroom.

The “classroom” space – some benches that look like they could be a picnic area defined by an arbour – is part of an interpretive playground that isn’t complete until kids add their imagination.

The space incorporates the bones of a dry riverbed and trees and logs of a forest, but “it’s left up to the kids’ imagination” to figure out how it all works for them, and how they can use it, explained Phil Milton of Habitat Systems, who designed the space and supervised its construction.

Even before it was officially opened, he saw some boys using the logs and benches for parkeur activity.

“We’re affording the children an opportunity to play with it as they wish, to use it as they wish,” he explained, adding that combining the outside play space with the classroom “pushes the limits of teaching.”

The idea, he said, was to give kids the “benefits of being outside [and] hopefully let them develop different thoughts and reflections.”

At an official opening celebration this week, school principal Vanessa Yaggi said the playground/classroom concept evolved over four years, starting with a realization that kids’ “thought processes are different now,” due to changes in the social environments they’re growing up in.

“There are benefits to devices and the Internet,” she explained, “but more and more, we see some of the detriments.”

Children have become more “instant,” she said. They were coming to school more easily frustrated, quicker to lose their concentration.

“We needed kids to get more focused, ready to learn,” Yaggi said.

The school brought in an occupational therapist, to understand how different children learn differently.

“We did some learning,” said Yaggi, to understand how to get students back into their “green zone” – an emotional state conducive to learning – and to recognize when they had slipped into a “yellow zone” or beyond.

One of the first steps taken at the school was to tone down the walls of the classrooms.

“The whole philosophy is to create a calm, peaceful place,” said Yaggi, “instead of the razzle dazzle when I started teaching.”

At that time, she explained, the prevailing thought was to clutter walls with posters and brilliance.

Now classrooms are more subdued, and there is a “sensory pathway” in the hall, where kids can go for a “body break” – to let go of some pent up energy through hopscotch or other activities, either in small groups or even as a whole class, when things start to fall out of focus.

The outdoor classroom – bringing kids closer to nature, and combining their play area with an imaginative learning space – is the culmination of the social emotional learning environment that Langley Meadows has been striving for.

The opening ceremony included recognizing some of the people who helped bring the outdoor classroom into its imaginative reality, from school district officials and PAC representatives to parents who put in special efforts, like Wyatt Sjodin who provided the trees and logs incorporated into the play area.

The ceremony, with all of the students sitting patiently in the school gymnasium, concluded with vice principal Yvonne Brenneman declaring an “extra recess.”

And a lot of pent up energy was released as the kids headed outside for a massive body break, bouncing around the rocks of a dry river bed and running through their imagination’s interpretive forest. 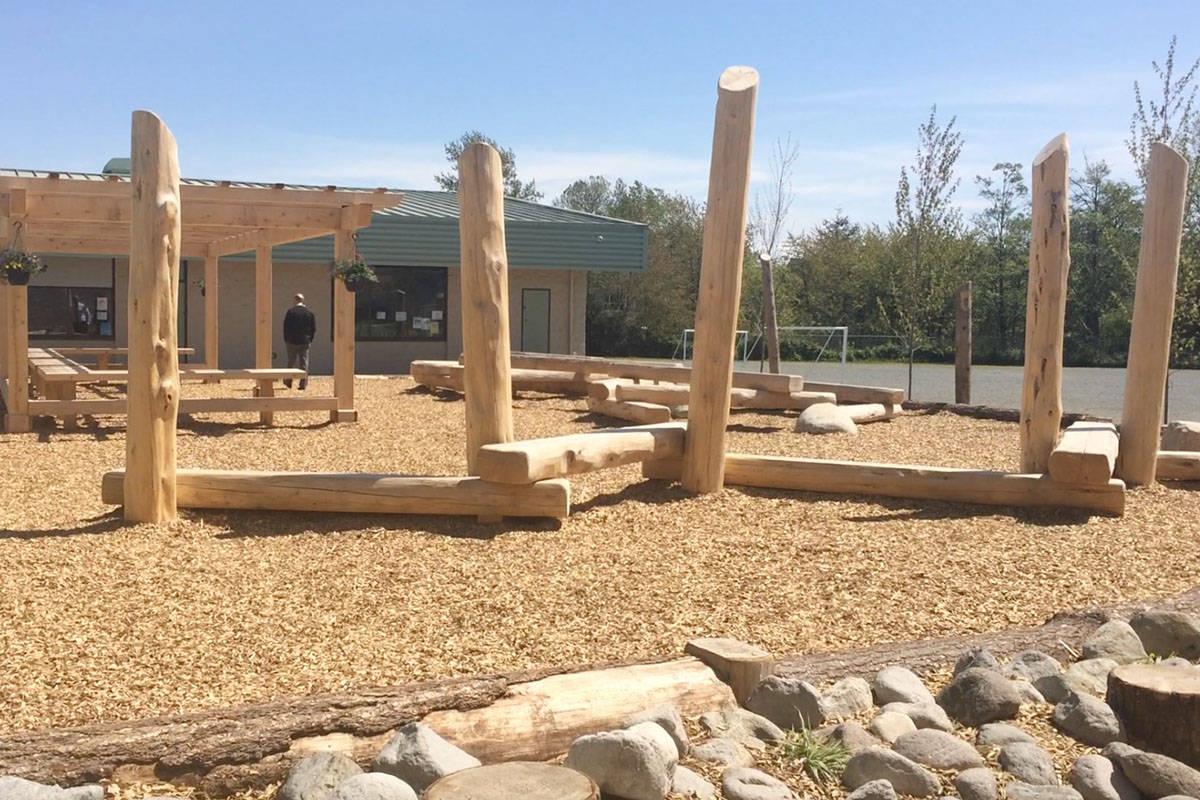 The new outdoor learning space at Langley Meadows Elementary is mostly left to children’s imagination to use as they see fit.

Postcard a window into Langley’s wartime past