It’s been two years since Tiffany Desrosiers has performed at home.

But the ‘popera’ singer and songwriter is back in Langley this Sunday, Dec. 2 for a concert in Murrayville.

The show will feature not only her own pop-opera crossover sounds, but those of fellow Vivace members – Pittsburgh’s Joel Ros, Victoria’s Gabriel Macdonald, Vancouver’s Melody Courage, as well as pianist Paloma Pendharkar and violinist Elyse Jacobson.

Out-of-town members from Vivace are in Langley in December, “so it made sense to host a hometown Christmas concert in early December,” she Desrosiers said, noting the group is releasing a brand new album, Diamonds, which ties in nicely with both the launch and the Christmas season.

“It will be so lovely to re-connect with friends and followers who I haven’t seen in awhile, and to share such beautiful music that is typically only heard in this season,” Desrosiers added.

“I have spent the majority of my life in Langley and performing right in my neighbourhood is a comfort.”

She went on to say that performing at home “definitely provides a sense of support, and at the same time I will probably be more nervous than for any upcoming shows, as it will be for an audience that I know.”

Following the local show, they’re off to Nelson for Dec. 5, then Courtenay on Dec. 8 – hometowns for other Vivace members.

Desrosiers spent the part of the past year performing in the States and on cruise ships traveling between Vancouver and the Caribbean.

“I don’t think I’ve ever been more challenged as an artist,” she said, noting she’s also been headlining in a Celine Dion tribute show in Vancouver since June and has been writing and recording three of her own singles she’s hoping to release soon.

Desrosiers and her friends are performing Sunday, Dec. 2 at the United Churches of Langley, 21562 Old Yale Rd. (at the Five Corners in Murrayville), starting at 2:30 p.m.

Advance tickets are $20 for adults, or $25 at the door, while seniors, students, and children get in for $15. Tickets are available in person from the church, by calling, 778-389-3771, or online through Brown Paper Tickets.

Also on tap this weekend are a number of other concerts, including a Christmas performance by the Langley Concert Band.

They’re hosting an afternoon of festive music, in a show called Something Old… Something New, where they’ll combine some classic holiday tunes with new music to put guests into the Christmas spirit.

Their concert is also on Sunday, December 2, starting at 3 p.m. at the Fort Langley Lions senior hall, 23022 88th Ave. in Fort Langley.

Admission is by donation, with a suggested $10 for adults and free for kids.

Show at Chan sold out

Also on Sunday, the Trinity Western University once again hosts its traditional Christmas at the Chan.

This sold-out gala-style concert, featuring four TWU choirs, begins at 2:30 p.m. at the Chan Centre for Performing Arts in Vancouver.

This afternoon of music is the highlight of the Christmas season for the school that ushers in the spirit and meaning of Christmas, said conductor Dr. Joel Tranquilla.

Special guests this year are the celebrated Pacific Mennonite children’s choir, under the direction of Betty-Ann Braun.

Combined, this concert brings together 150 singers with a 40-piece orchestra of professional musicians.

The program this year plays on the theme of time, reflecting the story of Christ’s birth as it has been told throughout history. Christmas is a season of both celebration and reflection when we also look forward with joy and hope to the year ahead.

This concert is a musical journey through time, encompassing selections from the 14th through 21st century.

And again on Sunday, again at 2:30 p.m., there’s a concert – but this one is closer to home, at Langley Community Music School.

The afternoon begins at 2:30 pm with a pre-concert conversation with Masciadri and Bolshoy, hosted by LCMS’s artistic director and famed pianist Elizabeth Bergmann.

“The friendly and informative commentary will highlight the duo’s careers, and share their personal insights into the afternoon’s selections,” Bergmann said.

Then, there will be a short break with coffee and refreshments before the performance from 3:30 to 4:30 p.m.

The virtuoso duo will be taking a unique approach to the lyrical and Latin side of double bass and guitar repertoire.

Their performance will feature song and dance pieces by composers such as Heitor Villa-Lobos, Gabriel Fauré , Carlos Guastavino, as well as Edmundo Villani-Cortes and Antonio Carlos Jobim.

“LCMS is very pleased to be presenting this dynamic duo and their Latin and Spanish flavoured program,” Bergmann said.

“The combination of classical guitar and double bass evokes sounds of a very special timbre, and this particular colour creates a wonderfully intimate listening experience. This will be a fabulous afternoon of music that promises to keep you warm at this time of the year,” she added.

LMCS’s 2018-19 concert season continues in January and will include Jon Kimura Parker on piano, and Aloysia Friedmann on violin for the Jan. 26 concert. 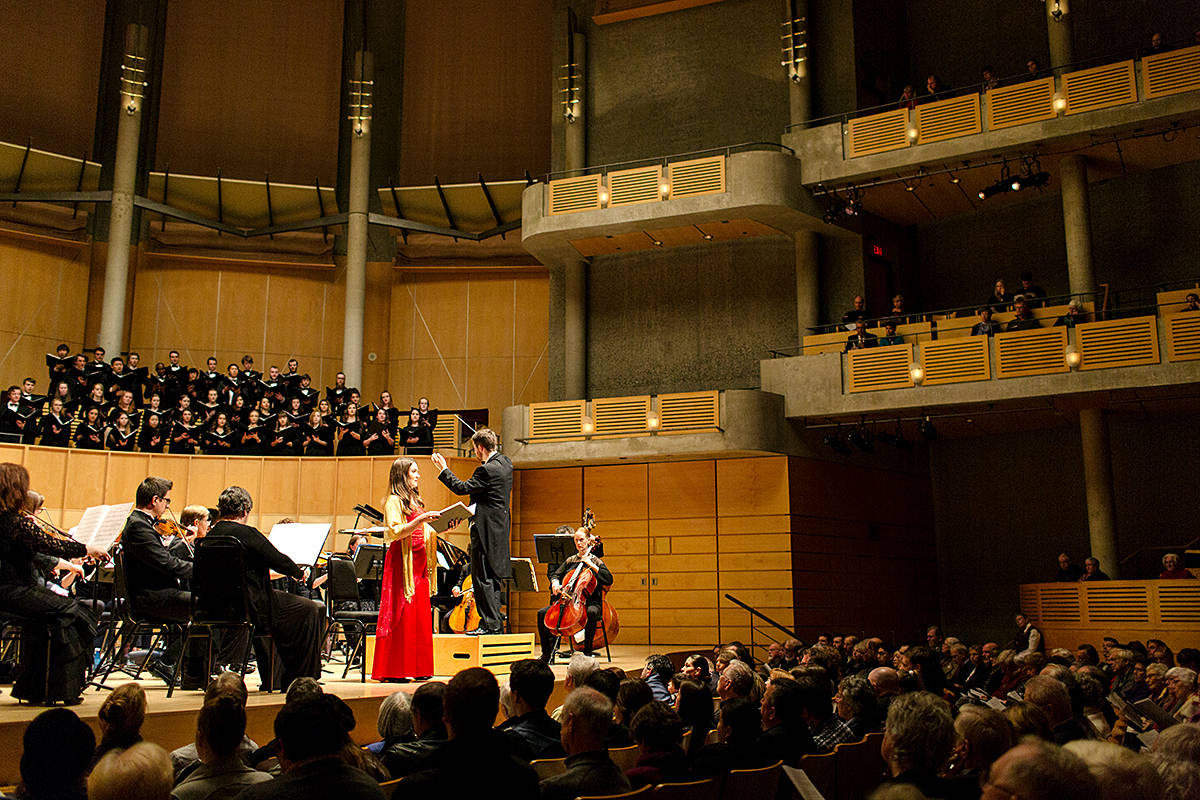 For years, the TWU choirs have been performing a Christmas show at the Chan Centre for Performing Arts in Vancouver. (Wendy Delamont Lees)

From rusted to restored, new docu-series puts Shuswap on display