As motorcyclists lined up in the parking lot of the South Langley Church, Doug Penner was zipping around in a motorized wheelchair, pausing to have his picture taken with various participants in the annual fundraising ride that bears his name.

Doug was wearing a cast, the result of suffering his third broken leg in as many summers, but the 16-year-old Murrayville teen would still be taking part in the 13th annual Ride for Doug, a 200-kilometre motorcycle ride through the Fraser Valley to raise money and awareness for muscular dystrophy.

But, because of the cast, instead of riding on a motorcycle with dad Cam, he would be a passenger on his mom’s (Allison’s) three-wheel Can-Am Spyder.

READ MORE: Ride namesake given all-clear to saddle up Sunday in Langley

On Sunday, June 2, Doug and his parents were joined by 90 riders on 70 motorcycles for a 200-kilometre journey through the Fraser Valley.

It was a bright and warm day, better than the damp conditions that reduced turnout last year to 38 motorcycles and donations to $21,000.

Some of the money, $7,000, will be put in a fund to convert a vehicle for Doug to drive, while the rest will go to muscular dystrophy (MD) research.

He’s due to be assessed for his ability to drive, and if he gets a thumbs-up for the doctors, it will cost about $15,000 – on top of the purchase price – to make a vehicle driveable for Doug.

Currently, his family is using a 15-year-old “mostly good” accessible van that was purchased last year after Doug ended up in a wheelchair after suffering his second serious leg injury in as many years.

As of this year, the total amount donated to MD research by the ride for Doug has reached $ 242,000.

Speaking to supporters at the end of the ride, Cam said he was, “as always, blown away” by the support the family receives.

“By the friends – new and old – who come year after year, blown away by the generosity of strangers, [by] people giving up their sunny afternoons to ride with us,” Cam recounted.

Often, he said, the family is asked how they cope with the endless challenges of MD.

“At the end of each day, no matter how productive and exhausted we are, there are always things left on the to-do list.”

It is not uncommon for the family to go a couple of weeks between finding time to get groceries, he noted.

Last year, the Penners had their yard re-landscaped, and specified it should be “low maintenance” but even with that, Cam observed, he usually doesn’t get time to mow the lawn before his neighbour does it for them.

They moved houses a couple of years ago, and still have a room full of boxes they haven’t opened.

How do they cope?

“The answer is that there isn’t a choice. We have to go on. And we rely on the support of those around us to make it through.”

On Sunday, July 7, the Vancouver Island edition of the Ride for Doug will be held in Victoria. 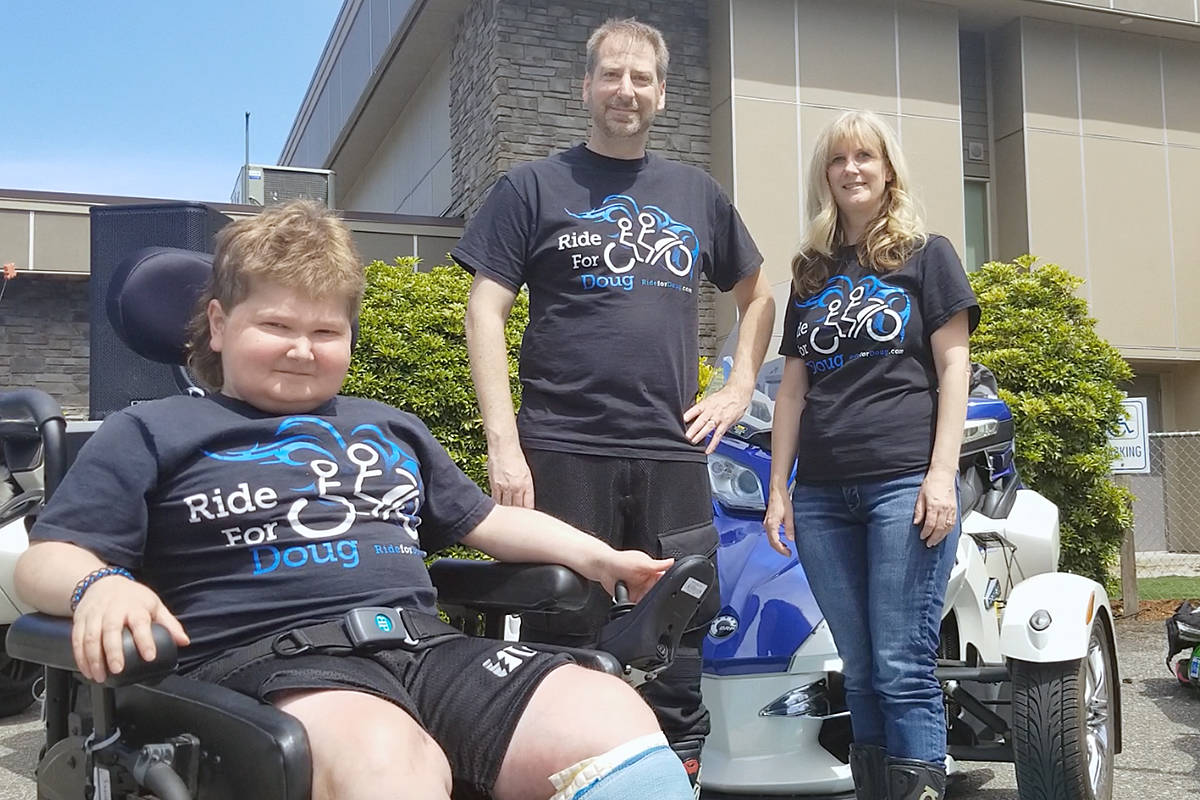