Kayla Loos does it for her little brother Kory and her aunt Andrea Alfoldy who live with the disease.

She does it for her late aunt Reg – who they lost to Multiple Sclerosis several years ago.

Loos is the organizers of the annual MS Walk in Langley, and she does it for all of her family stricken with the debilitating and potentially fatal disease. But she also does it for all the people she’s never met, who are afflicted.

Loos, is a young Delta woman who has participated in a number of MS Walks through the years, dating back to 2005. Two years ago, however, she decided to ramp up her volunteer involvement.

That’s when she took on the coordinator’s role – alongside her mother, Christa Fox – for the Langley walk. It’s one of 140 treks being taken in communities across Canada to raise money to help those affected by MS.

This year’s walk, much to Loos’ delight, attracted even more participants and raised even more money than last year.

Last year there were about 150 participants in the Sunday morning walk. This year, that number jumped to 200.

Last year they raised close to $23,000. This year, that tally has already exceeded $33,000, and it’s Loos’ hope that even more will come in from yet uncollected pledges.

“It’s really helped to advance research, help people get funding for medication, and just be more comfortable in talking about their MS,” explained Alfoldy, who lives with the disease.

While Loos and Fox have been working for the past few months to organize the event, Alfoldy (of Mission) was the family member to grab a microphone and serve as host for the morning fundraiser.

And several of family members worked behind the scenes on the logistics of the event, there were a few members of Loos’ family who also took part in the shorter leg of the MS Walk. That included Loos’ 87-year-old grandmother Margaret Fox, of Vancouver, as well as her little brother, Kory (now 21) who was diagnosed at age 14.

“Who knows where he’d be without the MS Society,” Loos said. “I’m so proud of him… I’m really proud of them (the MS Society) and I need to give back to them,” Loos addded.

Uniting for a common goal

“Canada has one of the highest rates of multiple sclerosis in the world,” Alfoldy told the crowd.

“Today, we’re gathered together to collectively show that we’ve chosen to help change this.”

The walk was attended by a number of local teams.

Lori Mahon of Cloverdale walked with her two daughters – Hannah, 10, and Robyn, six – and a handful of other family and friends on Sunday.

She was diagnosed with MS in September 2016, and the following May participated in her first walk.

She’s back again this year with a team. And this time out, with the support of her cousin and others, Team Lori managed to raise more than $1,000 for the cause.

“It’s a big family event for us,” Lori said.

“We’re all going through it together,” she said, specifically spotlighting the support she receives from her daughters. “They’re a huge part of my life… they’re what keeps me going at the end of the day.”

Other teams included Team Agrima, with more than 60 members, Team Hunger, Taylor’s Team, For a Cure, and Pamela’s Team.

“The money you have raised today,” Alfoldy said, “makes it possible for the MS Society to keep providing services and resources we need so much for people living with MS right now, as well as to fund research for a cause and a cure and to help people affected by MS enhance their quality of life.”

In addition to the fundraising walk on Sunday, the MS Society is also hosting a bike tour this summer in the Fraser Valley, a two-day trek on July 14 and 15. 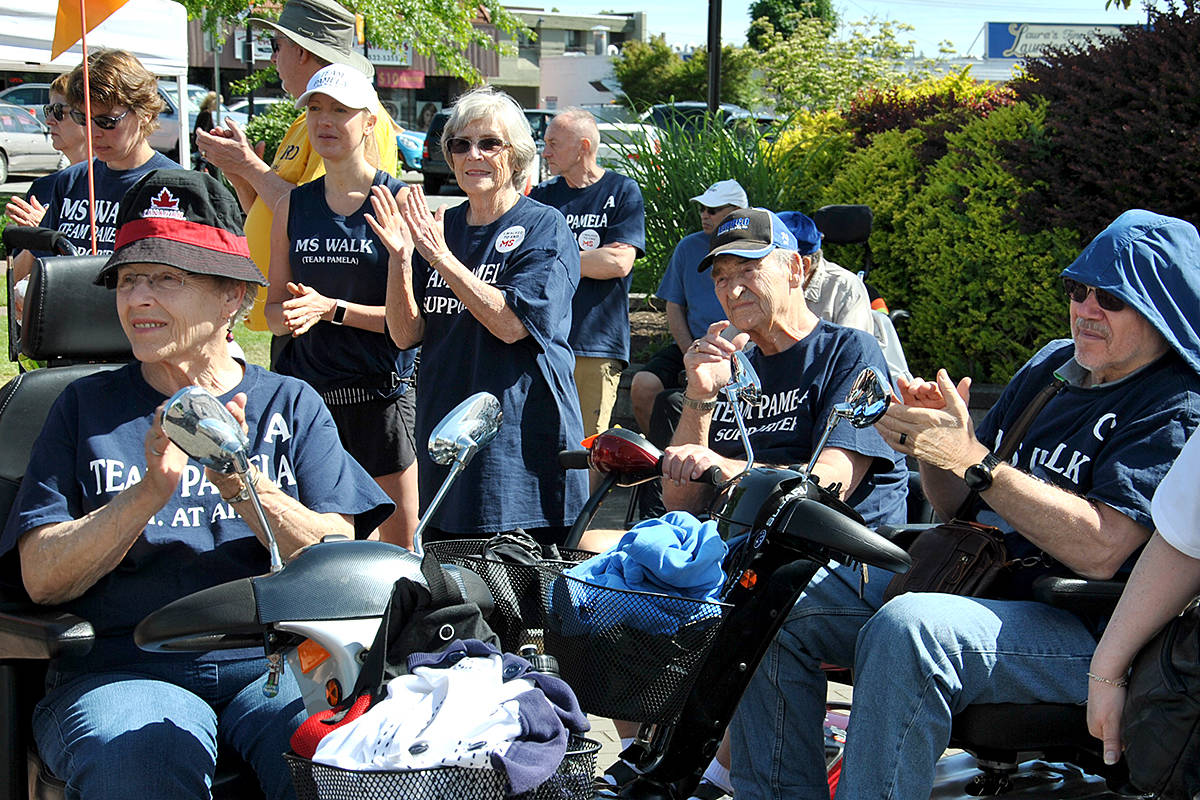 Team Pamela is a Langley team featuring Langley’s Pam and Gord Weitzel, who both live with MS. (Roxanne Hooper/Langley Advance) 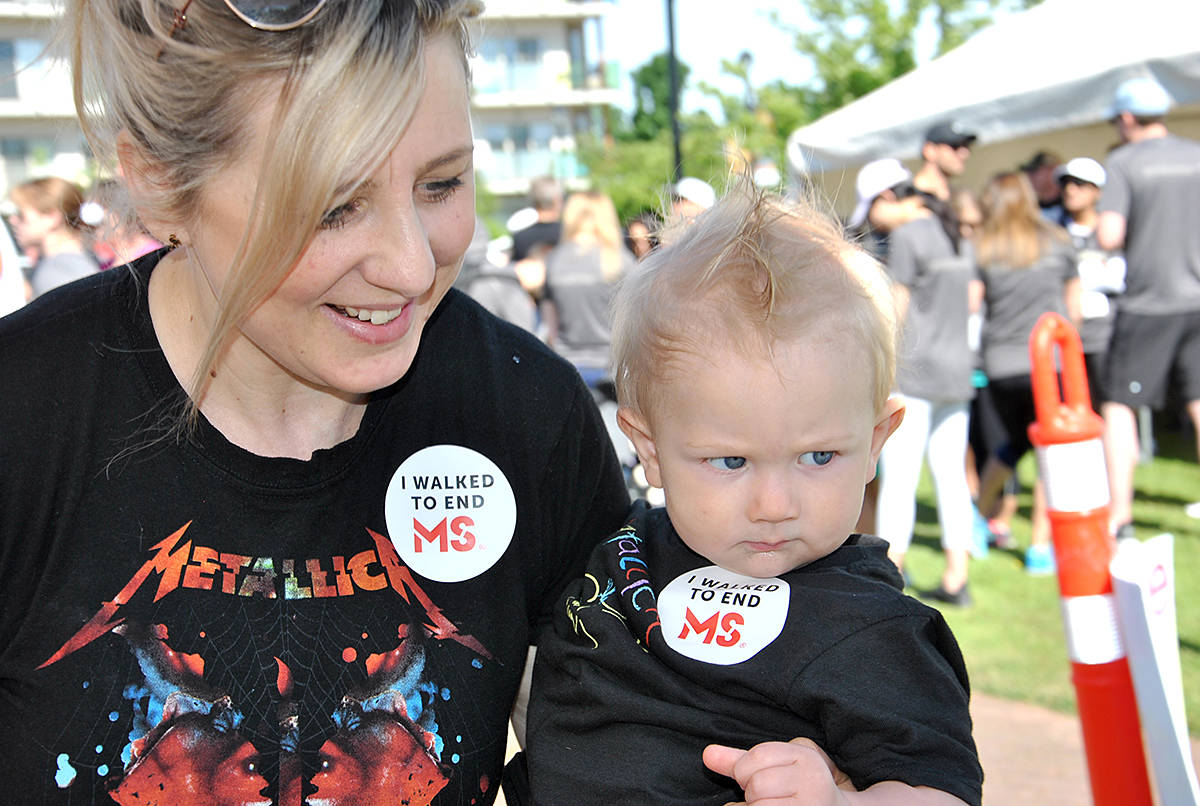 Walkers of all ages came out, about 200 of them, Sunday morning to participate in the annual MS Walk held at Douglas Park in downtown Langley City. (Roxanne Hooper/Langley Advance) 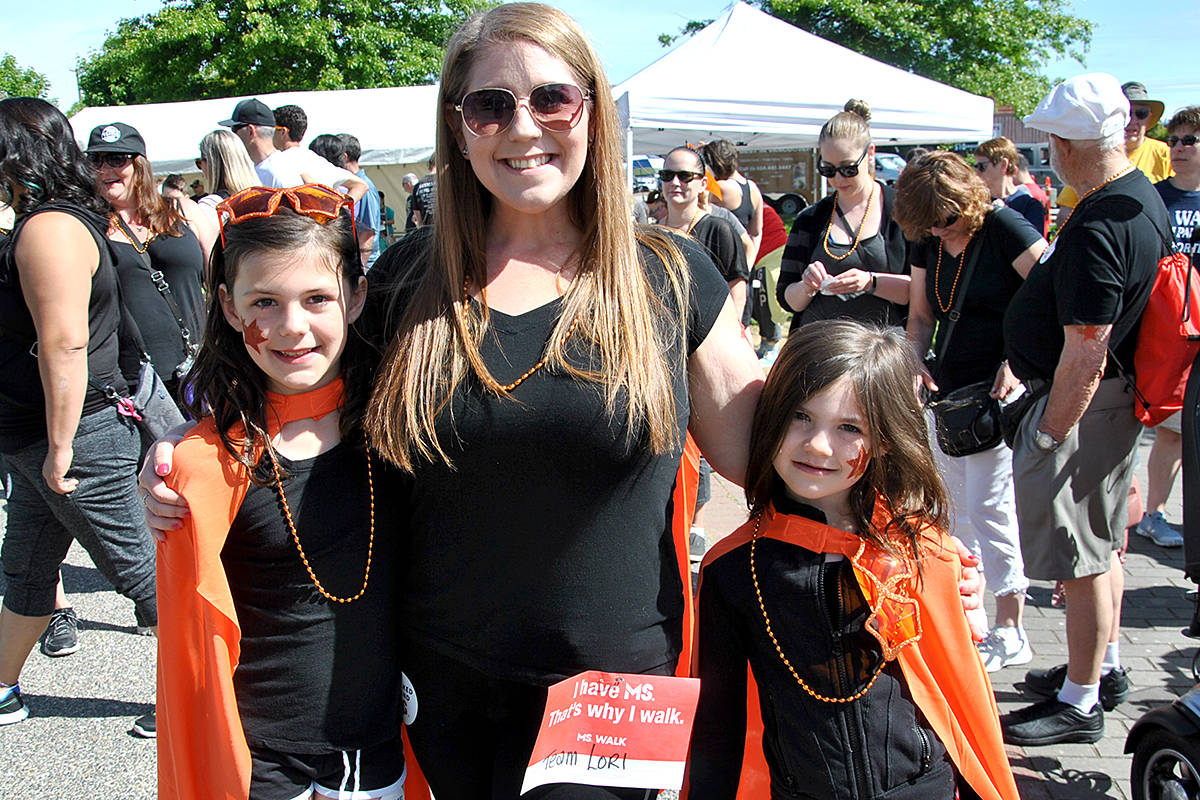 Lori Mahon of Cloverdale, and her daughters Hannah and Robyn, participated in her second annual MS Walk. Lori was diagnosed in September 2016. (Roxanne Hooper/Langley Advance)

Letter: Langley Walk should be free from politicking