In a land where metallic monsters roll on swollen rubberized tires across the North American landscape, the Langley Area Mostly British Motoring Club (or LAMB) pays homage to the little guy.

“We look up at Smart Cars,” joked LAMB co-founder Victor Russell, as he promoted the 12th annual St. George’s Day British Motoring Show happening this Sunday, April 23 from 10 a.m. to 4 p.m. in front of the 86-year-old Fort Langley Community Hall.

Sporty ‘Brit-mobiles’ will be on display during the LAMB-hosted show-and-shine that is also a fundraiser, with proceeds going to Big Brothers Big Sisters of Langley.

St. George is the patron saint of England and LAMB tries to hold its annual car show as close as possible to April 23, the day that pays tribute to him.

“The first event was on the 23rd and this event is on the 23rd,” noted John Walkden, another of LAMB’s co-founders.

Russell and Walkden founded LAMB in 2002, simply because both have an affinity for British sports cars.

“We wanted to include everybody and with some clubs, you’ll find people who say, ‘You have a different motor in your car than the car itself, so you can’t belong to our club,’” Russell noted. “And in our case, that doesn’t matter with us.”

Around the time they founded LAMB, Walkden was president of the Rover Club of Canada, and Russell presided over the B.C. Triumph Registry. The two felt there was a gaping hole in the Fraser Valley for fellow British vehicle aficionados.

“There were clubs in Chilliwack, and clubs in Vancouver, and then there was this little hollow in the middle in the Surrey/Langley area,” Russell said. “We’d go to the (Langley Good Times) Cruise-In, and we find that having a British car at the Cruise-In is like having an orphan: nobody knows what the hell it is.”

The only British car Russell has ever owned is a 1959 Triumph TR3A.

“Years ago, I liked to look at British cars because they were so different,” Russell said.

Russell admired a neighbour’s TR3 for years, so in 1989 he decided to purchase one himself after spotting one for sale in a Vancouver newspaper’s classified section.

Since buying the Triumph, Russell has changed “everything” to the car: “It has a new frame, it has new some panels, it has new floors, it has new rockers, it has new paint, it has new electrical… I’ve been collecting parts for that car for over 20 years, because you don’t just go to the store and buy a new frame for a ‘59 Triumph.”

“My dad always had English cars, so I’ve always liked them,” Walkden said. “I like the feel, the look… the styling.”

Russell plans on bringing his Triumph while Walkden is taking his Jensen to Sunday’s event, that will also feature a G-Wagon, an Argentinian army vehicle involved in the Falklands Conflict in 1982 as well as taxis, potentially a double decker bus, and British vehicles of every flavour.

The hall will be a busy place on Sunday. Inside, the Royal Party Tea is hosting a fundraiser for Fort Langley’s 95th May Day Parade and Events.

Organic tea is being provided by Sweet Grass Naturals.

During the tea, which is being sponsored by Wendels True Foods, the 2017 May Queen and her Honour Court are randomly chosen and the Queen Mother, an honourary title, is presented to the guests. 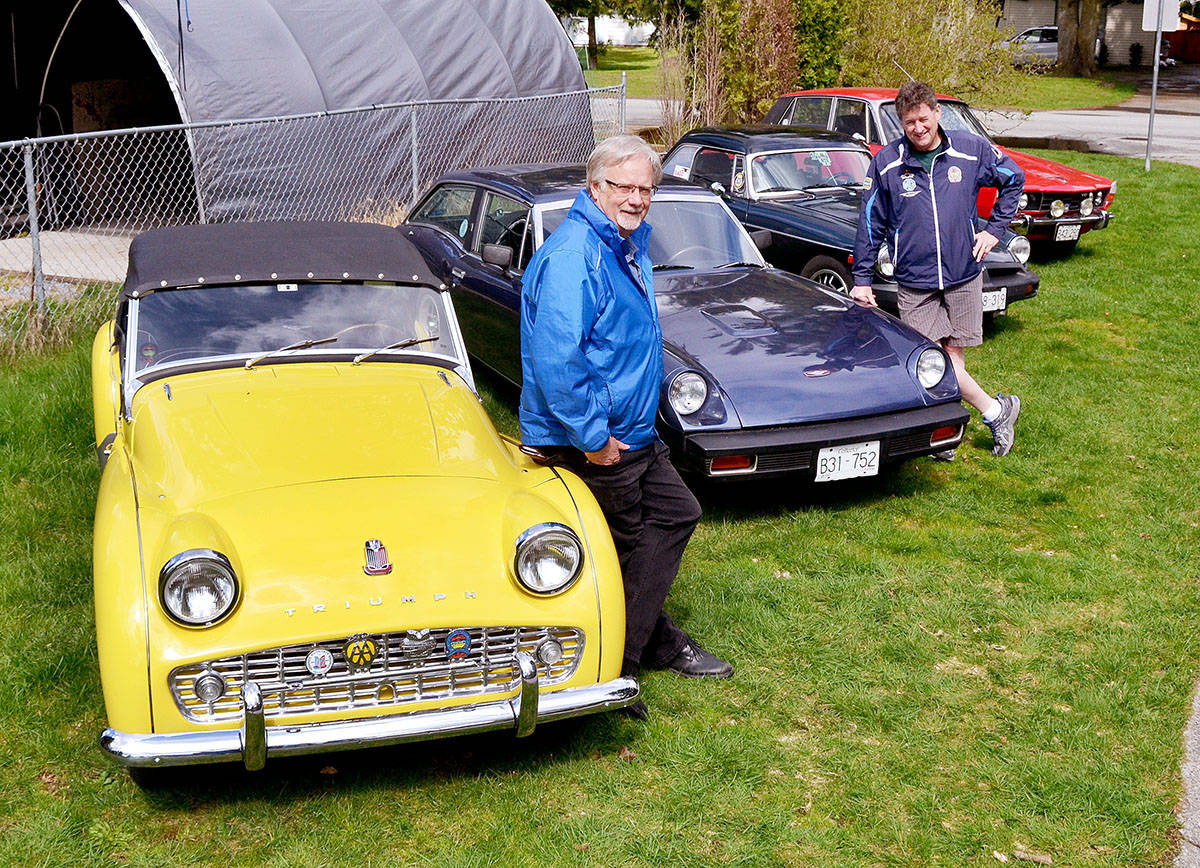