It’s not the sort of place you’d expect to find an eclectic local market.

Tucked away on a 50 acre farm on 216 Street near 4 Avenue, shoppers who travel this far south can find an assortment of homemade cleaning products, jewelry, bath bombs, spices and furniture.

But what sets this market apart from many of the other local shops in Langley, is that all of the products are made by the residents of Wagner Hills, an addictions recovery centre.

This social enterprise, known as “The Market at Wagner Hills Farm,” was dreamed up by Dawn Bralovich, director of Wagner’s women’s campus, and brought to life with the help of Lisa Moody, an interior design and creative director for the market, Clare Walker, core team and product developer for the market, and an army of community volunteers.

In just a few short months, they managed to take the store from concept to reality, converting an old portable into a quaint little shop, and building up a inventory of products to sell.

The Market officially opened at the women’s campus in May, and will continue to run every Saturday from 10 a.m. to 4 p.m. until Christmas.

“This place, this (women’s) campus has been here for eight years now and there hasn’t really been any exposure or community interaction. And so for a long time, no one even really knew what we did here as an organization,” Bralovich said.

“And really the ladies, there wasn’t much for them to do in the program that had them working alongside people, and I think it’s really, really important for them to be learning and to be feeling like they’re contributing to the place that they live.”

Wagner Hills, a Christian ministry, was founded in 1981 first as a place of recovery for broken men in addiction. In 2008, a second women’s campus was opened on land from BC Housing.

Residents live on the campuses for a year as they work through their addictions, and as part of the program, are taught many life skills, such as cooking, sewing and carpentry.

The Market serves as a way for the residents to showcase their work, while raising money for the addictions centre to operate.

The government provides a subsidy of $30 per day for the residents, but the actual cost to have them in the program is $130 per day.

“It’s all charitable. Every penny that’s brought in comes back to Wagner, and it’s a related business,” Bralovich said.

“That means that over half of what we sell has to be made here on the property. If we’re making a relish, it’s from zucchini grown here on site. It’s really a start to finish project. The jams are all made from berries grown on Wagner grounds.”

In fact, Bralovich estimates that 95 per cent of the products sold at the market are created right on their property. Most are made by residents at the women’s campus, but some items are contributed by the men as well.

They have their own honey, made by a member of the men’s campus who has completed a beekeeping course, and farm fresh eggs from the chickens on their land. They refurbish donated furniture, with the help of cabinet maker and volunteer Andy Harrison, and build handmade shelving and lawn games.

Half of the building where The Market is located also serves as a classroom, where the women are taught sewing, knitting, painting, calligraphy, baking and canning.

“That’s the cool thing, is to see them take ownership and take pride in the things that they’re developing for the market,” Moody said. “And then when they come in, they see people get excited and buy (their products) on Saturday. It’s the neatest feeling.”

“The products are tagged and the name of the resident that helped make them is right on there so customers get to see who laid hands on what they’re purchasing,” Bralovich added.

“And then the classroom in here, lots of times they’re working on things with lots of helpers and teachers while we’re open. So people are shopping and getting to see who’s making what they’re purchasing”

While the market plays a role in helping dozens of residents reboot their lives, it has had a positive effect on the volunteers as well.

Moody says the entire experience has been “humbling.”

“It’s exciting. I like to work with the ladies and get to know them,” she said.

“I feel quite honoured to be part of their healing process during this year,” Walker added.

“… Even if they are just little conversations, like last night in the kitchen or just while were painting something.

“Just to be able to kind of come alongside and be a part of their year here, for me, I just feel honoured.”

Bralovich’s passion stems from a very personal connection to the recovery centre.

“My family, my husband, was healed of his addiction 15 years ago, from a meth addiction. And I watched how God can change a life,” she said.

“And for me, it’s a real privilege — that’s the word, for sure. To be a part of that story, to be here and to witness a life being transformed. And to get a snippet of that. It’s pretty awesome work.

The Market at Wagner Hills Farm 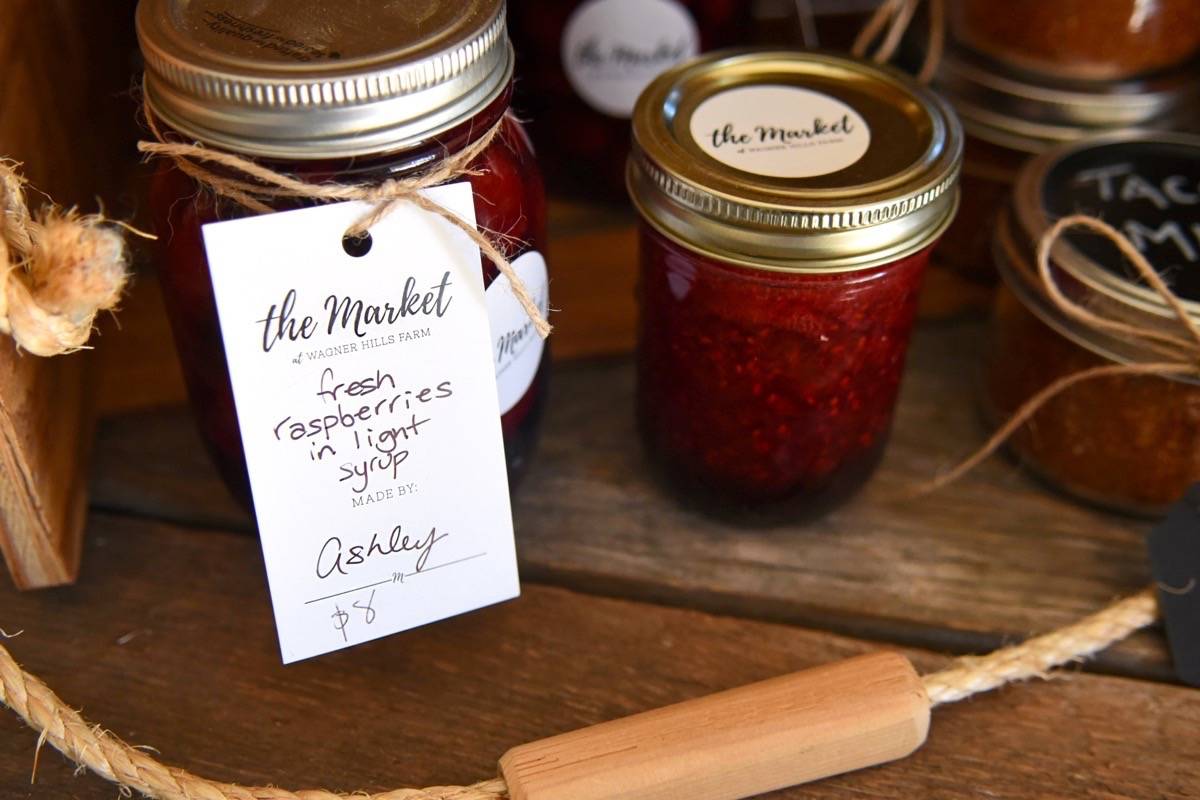 Each item sold at the market is tagged with the name of the person who made it. Miranda Gathercole Langley Times. 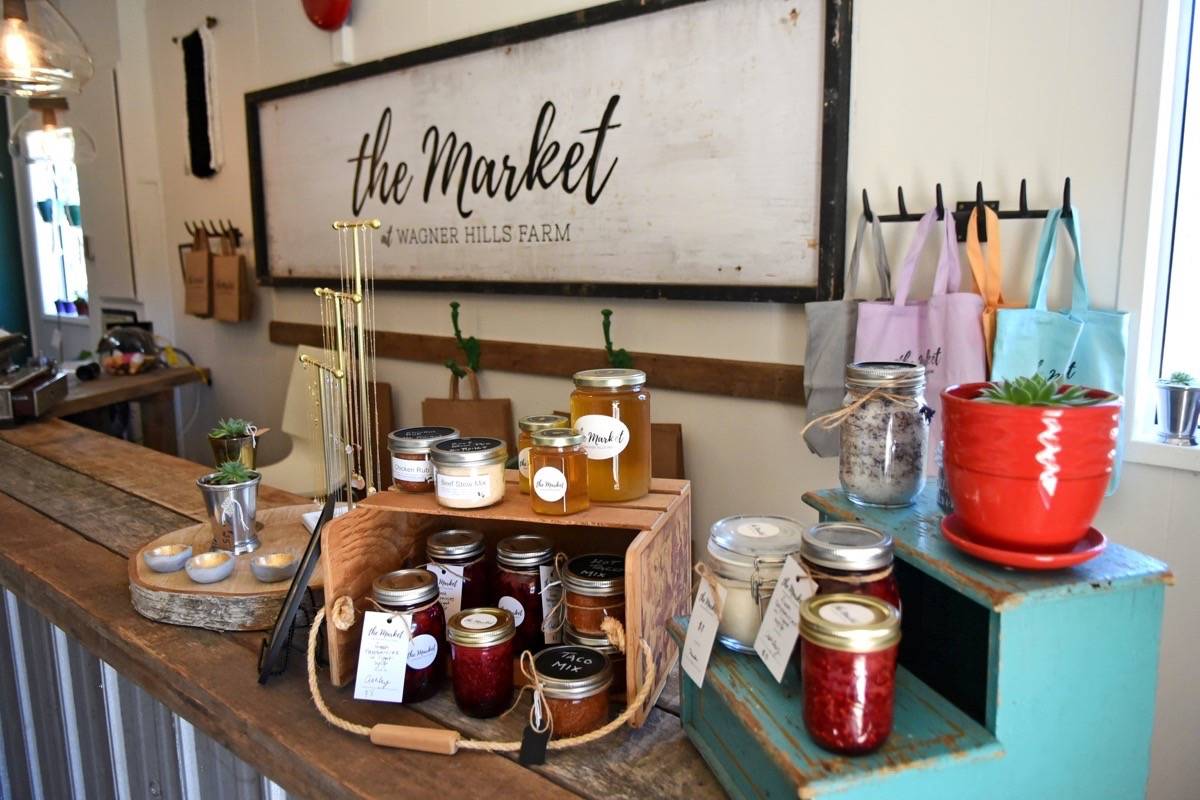