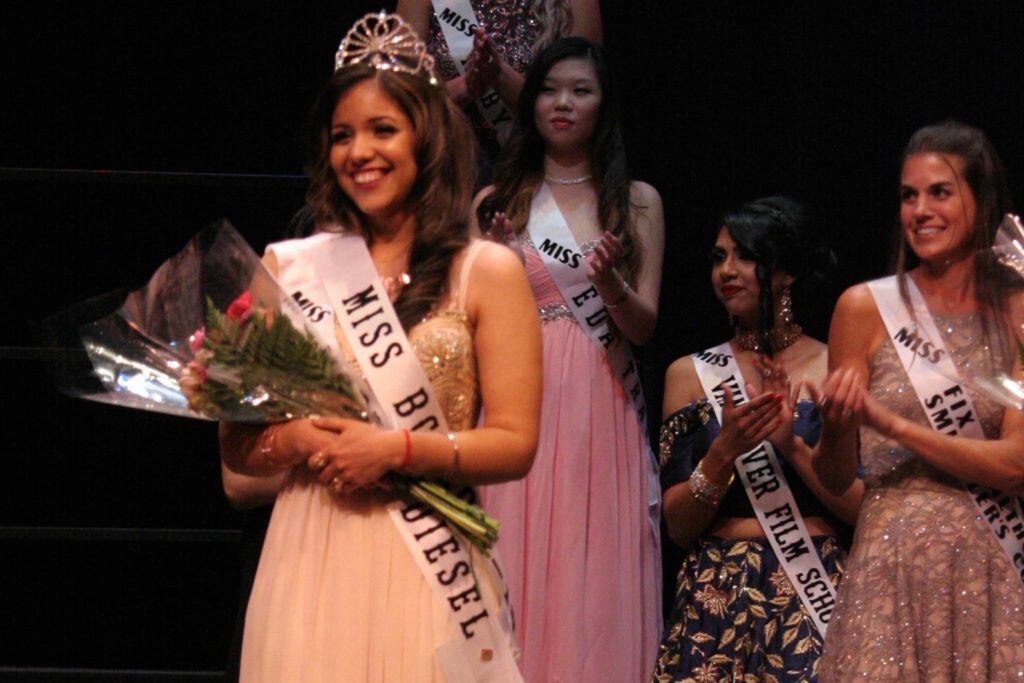 Only a few weeks remain until dozens of girls and women descend upon Fort Langley to take part in the annual Miss BC, Mrs. BC and Miss Teen BC pageant in a bid to win a crown.

There’s still time to vote for your favourite contestants in 2018 People’s Choice Awards. You can vote here until 11:59 p.m. on Thursday, June 21.

Check out the testimonies from some of the 2017 winners and what it meant to earn the title of Miss BC, Mrs. BC and Miss Teen BC. Black Press Media is a proud event sponsor.

Being crowned the first Miss British Columbia from Surrey is a huge honour, and with this honour comes a responsibility to be a voice of the province and raise awareness of my platform. This journey has been one that is truly unforgettable, and it is such a blessing to be a part of this family. The best part of this entire journey is having the opportunity to add my part on an incredible legacy.

I have had the most amazing time going to events and meeting incredible individuals. I have been trying to soak in each moment and I have to say this year has gone by insanely fast! I was able to participate in events all over our beautiful province, and it was something I never really planned for. The moment I was crowned Miss BC, I knew that I wanted to do as much as I could this year to give back to my community.

I have been volunteering around Surrey for a long time and giving back to my community is something I am very passionate about. I decided to raise my voice for those individuals who are facing insecurities and limiting themselves because of their fears. I was inspired by how much the Miss BC program has influenced me and helped me conquer my fears, and I wanted to do the same for others.

This year has been an amazing year of growth in me as a woman. I went from low self-esteem to being confident most of the time. I had not worn makeup or walked in heels since my early 20s. I felt I was old because I’m in my 40s. I felt I had lived in a long life due to my battles with depression. I knew I wanted to give back to The Canadian Mental Health Association for all the help they gave to me. For these and more reasons, my self-esteem has grown. I now wear makeup, walk in heels, 40s became young, my battles began short with my advocacy hoping to be long and I’m finally giving back to volunteering with CMHA. I have the pageant to thank for all this.

My platform was mental health. The pageant gave me that push to get involved. Last year, I volunteered to help with the “Ride Don’t Hide” route, raising money for CMHA in my hometown. I’ve also helped start the Safer From Suicide Action Team. We are that voice in our region to give people safe opportunities to talk about suicide. Living through many attempts myself, I know it’s not easy and even harder to talk with people because unless you’ve gone through suicide attempts, you won’t understand it at that level. This team is made up on many professionals and myself.

I’ve learned this year that life is about relationships. I am getting very excited to join my pageant family and volunteer so the lives of more women can be changed starting with one weekend together.

READ MORE: Miss BC competition a ‘catalyst’ for confidence, advocacy

I had a great time and it really helped me step out of my comfort zone. I enjoyed working with the Miss BC organization and I was able to participate with their partner-charity, Cops for Cancer, attend functions and even join a parade! For a 43-year-old mother, wife and veterinarian like me, it was a great break from my normal life!

The past seven years had been busy with aging parents, fertility treatments, pregnancies, raising two young children and my career. This gave me a chance to work on myself again! The pageant was wonderful and very focused on building confidence and working within the community.

I would describe my experience as Miss Teen Lower Mainland as ecstatic. Not only did I participate in many events locally and nationally (as I was chosen to represent B.C. and achieved the 2nd runner up in Miss Teen Canada), but I was able to expand my platform and give back to my community by helping others. Overall, I was a able to continue to be a person who strives to promote positive to my community.

Before I achieved the title, I thought the pageant was for women who were pretty, tall, and skinny. Yet, a title-holder myself, I learned that the pageant is completely the opposite. The experience and the bond I created with many girls from different cities helped me to gain confidence. The time I spent with many girls inspired and empowered me to focus on my platform. Furthermore, I think the pageant is not about earning the crown and the sash, but about using your title to reach out to the community and striving to make an impact. As a result, the pageant helped me to blossom into a whole-hearted individual.

Being crowned Miss Teen Greater Vancouver has been an enriching experience. I have been able to volunteer at numerous events, be a part of parades, raise money for different charities, do interviews, provide encouragement to youth, and do speeches such as a TedX talk at my school. I have grown in many ways and most importantly, I became the kind of person I dreamt to be like.

[The Miss Teen pageant] has developed my personality, confidence, and trust in myself greatly. I was always an ambitious and compassionate person, and this title gave me the opportunity to be a leader in my community. The changes in me are more evident to my family and friends, as they say I am more outspoken and willing to try new things. I can gladly say that I am not the same person I was when I first won my title.

I have been approached when wearing my sash in public by children who have wanted to speak to me about issues they were facing. To know that I was a figure they could trust was truly humbling. Many younger girls at my school have told me how much my advice and encouragement has helped them grow their self-esteem.

Being Mrs. BC this year has transformed me in ways I would have never imagined. Not only did I become crystal clear on my purpose and the kind of impact I want to make, I also discovered a strength I didn’t think I had. As Mrs. BC, I found my voice and a sense of fearlessness, and I developed a deep desire to serve the world in a really BIG WAY.

Initially my platform was simply to inspire and empower women to create fulfilling and abundant lives. Over time, it grew to providing tools and resources to those who struggle with mental health. I attended many events throughout the city, hosted my very own fundraiser in Vancouver called Dare to Dream, volunteered at Make A Wish Foundation, and made sure to support mental health events that really resonated with me.

It’s important to me to make sure that I share my story and my struggles, successes and wins to show people what’s possible, no matter the circumstances. As Mrs. BC, I knew that my leadership and influence had the power to inspire and empower change, which is why I dedicated the year to serve with compassion and empathy.

Miss BC – Arshdeep Purba of Surrey

Mrs. BC – Genicca Whitney of Surrey

VIDEO: Mission woman wants to share her story, inspire others