There was a certain level of tension in the air. Thursday’s (Oct. 4) Fort Langley all-candidates meeting for the 25 candidates for council was getting underway. Every candidate was seated, ready to go – except for the eight incumbent members of council. None of them were in the room.

The meeting started, with moderator Martina Boyd explaining the ground rules to the candidates. There were more than 200 people packed into Fort Langley community hall. Many were standing.

Just as she was about to draw for speaking order, the incumbents began to arrive. They had all been at another event at nearby Redwoods Golf Course. As luck would have it, the first name drawn was that of incumbent David Davis, who just after sitting down had to stand up to give his opening statement.

There are 22 candidates for the eight councillor positions. Other incumbents seeking re-election are Petrina Arnason, Michelle Sparrow, Kim Richter, Angie Quaale, Blair Whitmarsh and Bob Long. Former councillors Steve Ferguson and Bev Dornan are seeking to get back on council, and 2014 candidate Kerri Ross is running again.

The three candidates for mayor are incumbent Jack Froese, seeking his third term; Alex Joehl, a Murrayville resident; and Anna Remenik, who was active in opposing a proposed Brookswood-Fernidge plan in the period leading up to the 2014 election.

Many topics were covered at the meeting, which was also live streamed on Facebook and can be seen online. These included a tree-cutting bylaw; trucks travelling through downtown Fort Langley; cannabis legalization; relationships with First Nations; business taxation; bike lanes, transit and growth; a proposal for a cultural centre and housing on municipal property in Fort Langley; a proposed shelter on the Quality Inn site on 200 Street; the opioid crisis and Aldergrove revitalization.

On the tree bylaw, Whitmarsh said it needs to be a balance between the rights of property owners and the interests of those living near significant trees. Quaale said she supports the idea of a “well thought-out” tree bylaw. Wakelin said she supports a tree bylaw, and Davis said the large numbers of conifers in Brookswood are important to that area. He also would like protection of buffers of trees around ALR lands so there is no repeat of what happened last year on uplands that were part of Tara Farm in Milner.

Trucks need to be rerouted away from downtown Fort Langley, candidates agreed. Arnason said the truck route is a vestige from days of the Fort Langley-Maple Ridge ferry, which ended service in 2009. Sparrow said “there is no need for it now.” Joehl said some sort of bypass needs to be examined. Hee suggested putting up signs limiting the GVW (gross vehicle weight) of vehicles travelling along the route. He noted heavy truck traffic means it costs more to repair roads.

Cannabis grown on ALR land prompted strong opinions. Connerty said it should not be grown on land needed for food production. Remenik said ventilation of greenhouses means the smell is strong in the area where it is grown, adding production is better suited to industrial areas.

Ferguson said the odour from a large medical marijuana greenhouse operation near 264 Street and 0 Avenue is offensive to neighbours, and growing cannabis on ALR lands “is the last thing Langley needs.” Richter said “we do not want to see food land being used for cannabis.” Both Heppner and Hundal said agricultural land needs to be preserved. Dornan said she would like to see lightly-utilized land in the ALR leased to young farmers so they can get into the business. Houweling said how farm land is utilized for crops is much more important than simply protecting it from development.

Candidates were asked how best council can deal to address truth and reconciliation with First Nations, specifically the Kwantlen First Nation. Woodward said the proposed museum in Fort Langley will have a significant component devoted to, and involvement from the Kwantlen. He also suggested more joint business ventures such as the Lelem’ Café in Fort Langley. The building is owned by the Township, but the café is run by the Kwantlen’s business unit.

Froese said council has good relations with the Kwantlen First Nation and the Township is helping it with upgrading sports fields on Kwantlen land. The Township has memoranda of understanding with several First Nations.

Pratt said the Truth and Reconciliation Commission issued 99 calls to action and there are many opportunities to work on economic projects together. Long said it is important for council to meet with Kwantlen leadership and exchange ideas.

On business taxation, Dornan said fiscal responsibility “is the prime duty of council.” It is important to continually review spending, but as the Township is growing rapidly, there is a need for lots of new infrastructure.

Richter said “taxes are too high. We spend on things we should not spend on. We need to focus on core services.”

Houweling said the Township has to concentrate on “essentials before luxury,” but added that it must invest in infrastructure. Hundal said infrastructure is important, and the Township needs to attract new businesses to help boost tax revenue and job opportunities.

Candidates were asked about improving alternatives to vehicle transportation, and densification. Kunst said transit, cycling and creating livable and walkable communities are all alternatives to vehicles. Teichreib said the core in each community needs to be walkable, and not spread out as is the case today. Ross said encouraging more small businesses in Langley will keep many people from travelling out of the community. Chaddock-Costello said current development plans don’t place enough emphasis on transit use and bike lanes.

Connerty said there is a need to build town centres and decrease sprawl. Remenik said the Township’s growth strategy calls for preserving green space and “we need to focus on it.” Ferguson said “sustainable, good quality, managed growth is important.”

The Township proposal for a four-storey building and cultural centre/museum complex on its riverfront property (formerly occupied by the Bedford House Restaurant) came up. Whittell said it is a great start to more partnerships with the Kwantlen First Nation. Ross said four-storey buildings deviate from the community plan and “there must be community interaction.” Chaddock-Costello the community needs to be involved to “see if this is the best use.”

Teichreib said “we need to keep things we can’t get back,” and opposes prime property like that going into private hands through a partnership.

Arnason supports the supportive housing plan for the Quality Inn site on 200 Street, calling it “a huge gift to the Township.” Langley Township must be part of solutions to the larger homelessness problem, she said.

Sparrow noted that consultation work still needs to be done for the project to proceed. She added that the Township has recently seen a shelter for homeless youth open.

Joehl said “people don’t want this in their back yard,” and called for it to be located in a place “that satisfies everybody’s demands.” He called for public-private partnerships to help build such facilities. (Gary) Hee said the Township could lease space on land it owns for such facilities.

Asked about the current problem of widespread opioid use and fatalities from overdoses, Joehl said the answer is ending drug prohibition “so people can be brought out of the dark and get resources without the fear of being prosecuted.” Whittell said there is a definite need for treatment facilities. Arnason said it is important to try and understand the cause. Sparrow said “we need to have a conversation about it.”

Aldergrove revitalization was discussed. Woodward said that is his number one priority, as a landowner who knows how the development process works. He said it needs to be revitalized with private sector funds. Whitmarsh said Township investment in Aldergrove has set the table for private investment, and the Township is prepared to provide additional density and make the community more walkable.

Quaale said she is “excited about the future” in Aldergrove, which is ready to “welcome private investment.” Wakelin said beautification in the core area is needed to attract investors. Davis said there is no need to exclude any more land from the ALR to include in Aldergrove’s urban area. 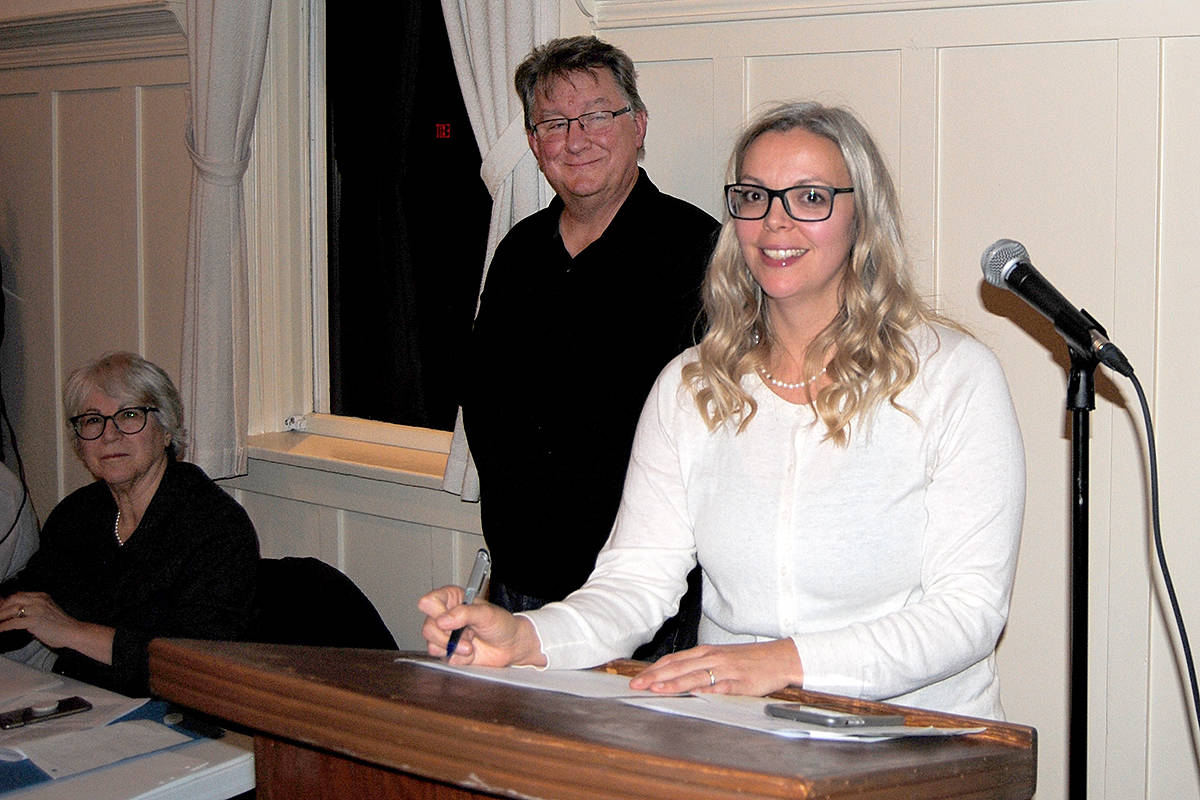