Langley City is considering a $50-million investment in the future, in the form of a budget proposal that would see the municipality borrow $10 million a year over five years to buy land, improve facilities, parks and trails, and make other improvements to prepare for the arrival of SkyTrain.

Council unanimously voted to give the plan preliminary approval.

Cheung described the plan as a “bold move” designed to take advantage of a “once-in-a-generation” opportunity.

“SkyTrain is a game changer and we need to be ready.”

Within the $50-million Nexus investment plan, the largest amount, $31 million, is budgeted for strategic land purchases, including property for a performing arts centre close to the current City hall and Timms Community Centre.

It would spend $10 million on expansions and enhancements to recreation facilities, $6 million in upgrades to Fraser Highway, including the one-way, and Douglas Crescent, and $3 million in parks as well as trails improvement.

A report to council lists several benefits, including an improved quality of life for all residents, putting the City in a “position of strength” to lead development as a land owner, implementing “early wins” to be better prepared for SkyTrain, take advantage of partnership opportunities as well as “deliver greater long-term financial gains to support residential and business programs.”

In his report to council, Leite said the loan would be repaid over 15 years through what were described as “modest” annual property tax increases of less than three per cent per year in the first five years.

Leite estimated the result would be an overall 6.67 per cent tax increase this year, less than the 6.98 per cent in 2019, a year when the City added three firefighters and other staff positions.

An average single-family dwelling in Langley City would pay about $139 more in municipal taxes, while an average multiple family home would pay about $66 more. Water, sewer and solid waste fees brings the total to $180 more for detached houses and $86 dollars for multiple unit residences.

It is the next step in the City Nexus of Community Vision plan that aims to prepare for the arrival of rapid transit and the changes it will bring,

The word Nexus was chosen to describe Langley City, as “a portal between two worlds,” Fraser Valley and Metro Vancouver.

The goal of the strategy is to make the city a key destination on the new rail transit line and a desired place to live by leveraging rapid transit to make Langley City an important regional hub.

It includes an overhaul of the Official Community Plan and Langley City zoning bylaws, creating an entertainment district with “appropriate” night life, as well as creating a a Nicomekl River District neighbourhood plan.

Leite said the last loan Langley City took out was $7 million for the water reservoir, which was built in 1999.

Residents will get a say on the new borrowing proposal once the regular budget process wraps up, either by going online to fill out a form, or by getting a written form from Timms Community Centre.

If more than 10 per cent of eligible voters oppose the idea, it will go back to council, which has the option of ordering a full referendum, amending the proposed borrowing, or abandoning it.

Within the regular budget are proposals to upgrade aging sewer and water pipes, install bike lanes on Glover Road and 208th Street, and upgrade existing facilities, including Al Anderson pool.

A profit-sharing agreement with Cascades Casino and Resort is projected to generate $7.2 million for the City this year, down slightly from previous years when as much as $7.8 million (in 2018) was generated.

Most of that money will go to capital projects, like road upgrades, improvements to City hall and other similar projects.

About $625,000 will fund various programs, including cleaning up homeless camps ($30,000) grants to community groups ($168,000) and the annual Remembrance Day service ($4,500), which the city is has taken over following the shutdown of the local Legion branch.

An open house to collect public input on the budget is scheduled for Thursday, Feb. 6, from 6 p.m. to 8 p.m.

Full details can be viewed online. 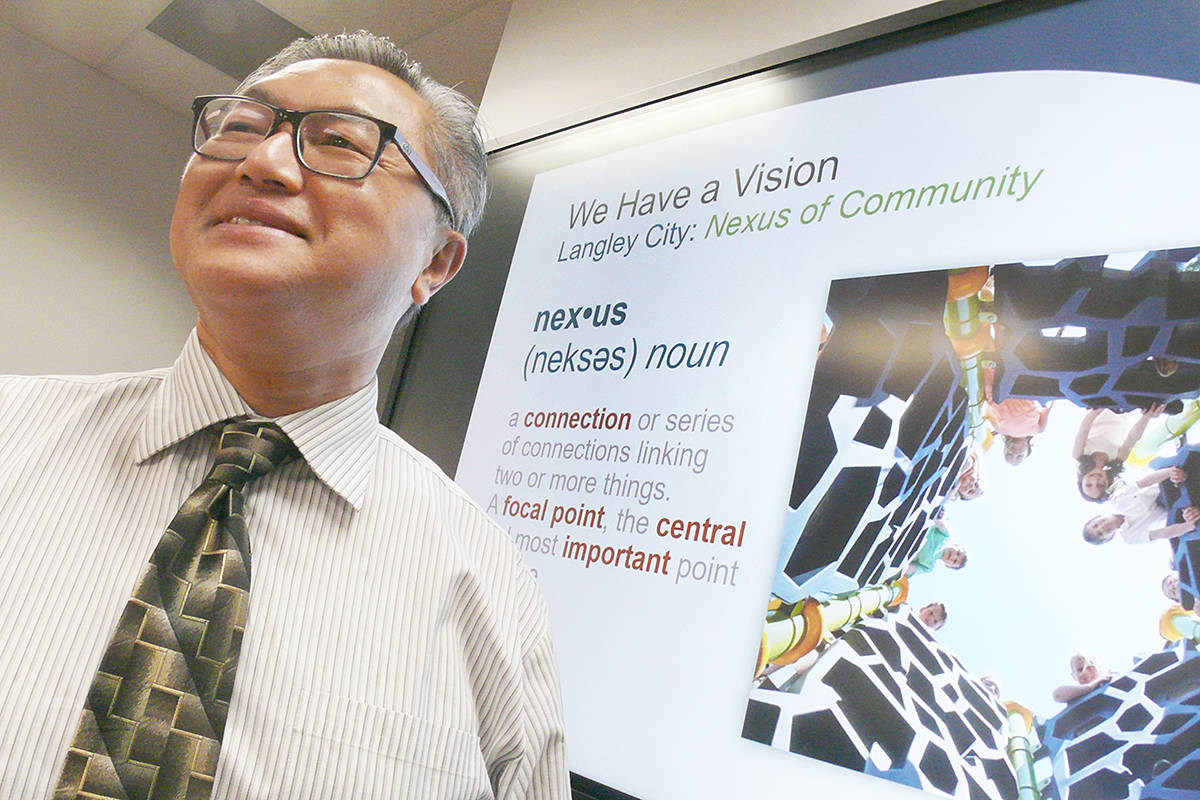 Langley City CAO Francis Cheung described a staff proposal to borrow $50 million as a “bold move” that will make sure the community is ready when rapid transit arrives. (Dan Ferguson/Langley Advance Times)