A family from 100 Mile House is the fourth to benefit from a campaign launched by a Langley father and son to provide financial aid to people battling cancer.

Coreen Granger, husband Jeremy and daughters Serenity and Lovemika are staying in Vancouver while eight-year-old son Justice undergoes treatment at BC Children’s Hospital in Vancouver.

Justice was diagnosed with Acute Lymphocytic Leukemia (ALL) in the spring of 2014, when he was two.

Since then, he has been in and out of hospitals for surgeries, blood transfusions, and chemotherapy, surviving organ failure, septic shock, and infections.

In August, older sister Serenity donated bone marrow to Justice, who is now recovering from his surgery at the Vancouver hospital.

He is not expected to return home until December.

Coreen had never heard of Ashley and Gerald Sambroski, and their campaign to help families cope with the financial burden of battling cancer, until a friend, who had been in touch with the Samborskis, messaged her.

She described her reaction to the unexpected contribution of $5,000 as “overwhelmed.”

“When we had to look for places to rent [in Vancouver], nobody wanted us because we weren’t working and it was short term,” she related.

Dad Jeremy had stepped away from the construction company he owned in order to be with his son, but that explanation didn’t seem to matter.

It didn’t help that rents were considerably higher in Vancouver.

The Grangers finally found a place offered by a “wonderful family that wanted to rent out their basement suite as a ministry to to help out Children’s [hospital]” she explained.

For Ashley and dad Gerald, it was a way to honour the memory of Adeline Samborski, Ashley’s mom and Gerald’s wife, who died in 2013 following an eight-month battle with pancreatic cancer.

After seeing how many people, like them, were struggling with finances while a loved one was fighting cancer, they decided to help others in similar situations by raising money.

Ashley had modest expectations going in.

“When I first started this, I thought it would take everything we had, just to get one check,”Ashley recalled.

Since then, four families have received $5,000 each, money raised a little at a time by the Samborskis from local donors.

Both were full of praise for the Granger family.

Gerald described them as “exceptionally nice.”

It may be awhile before the Samborskis can help a fifth family, however, because the COVID-19 pandemic has slowed fund-raising

“We used to get a lot of donations from restaurants, but they’re taking a beatin [during the pandemic],” Ashley shared.

They will continue raising money through raffles, prize draws and other approaches.

“We’re not slowing down,” Ashley said.

More information about the Langley campaign can be viewed on Facebook at “The Adeline Samborski 5k give away.”

Also on Facebook, the Grangers are posting updates at Justice’s Journey.

As well, a family friend has launched a GoFundMe campaign, “Love For Justice,“ 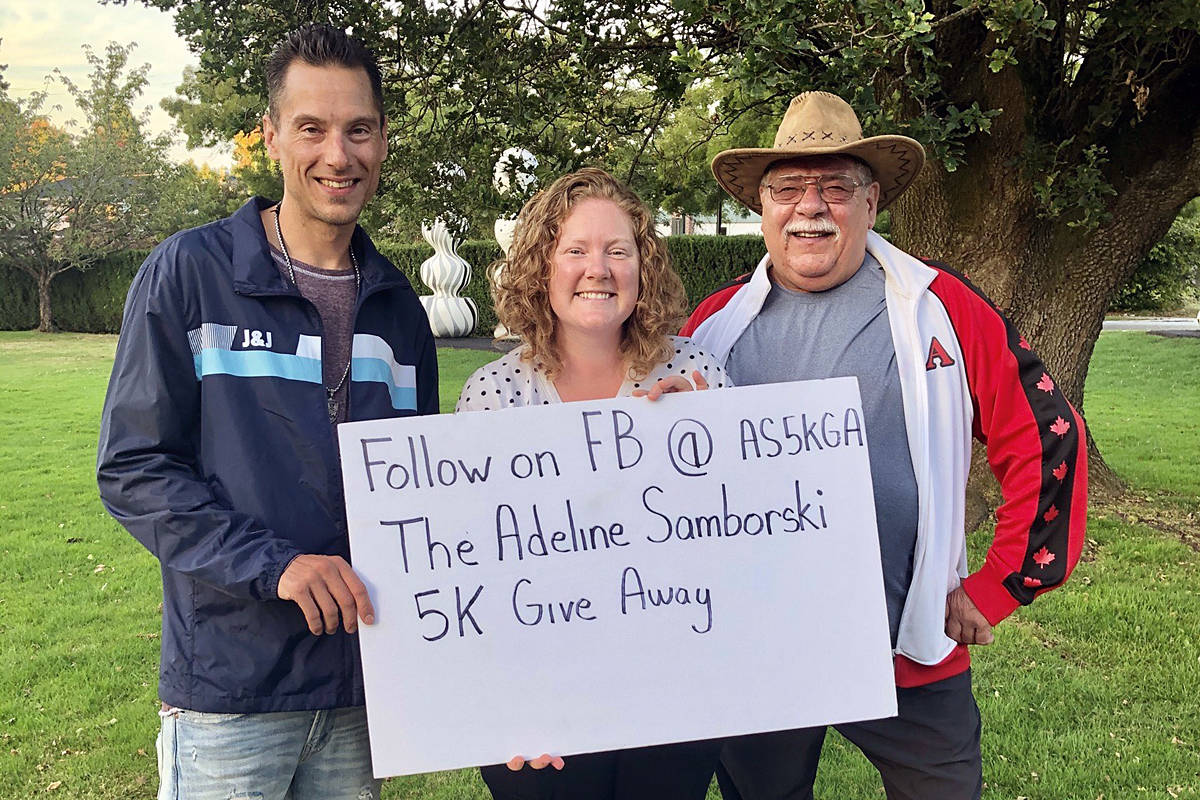 Ashley (left) and Gerald Sambroski (right) presented Corren Granger with $5,00 on Sunday, Sept. 6, when the family from 100 Mile House became the fourth to benefit from the “Adeline Samborski 5k giveaway” fund launched by the Langley father and son. (Special to Langley Advance Times) 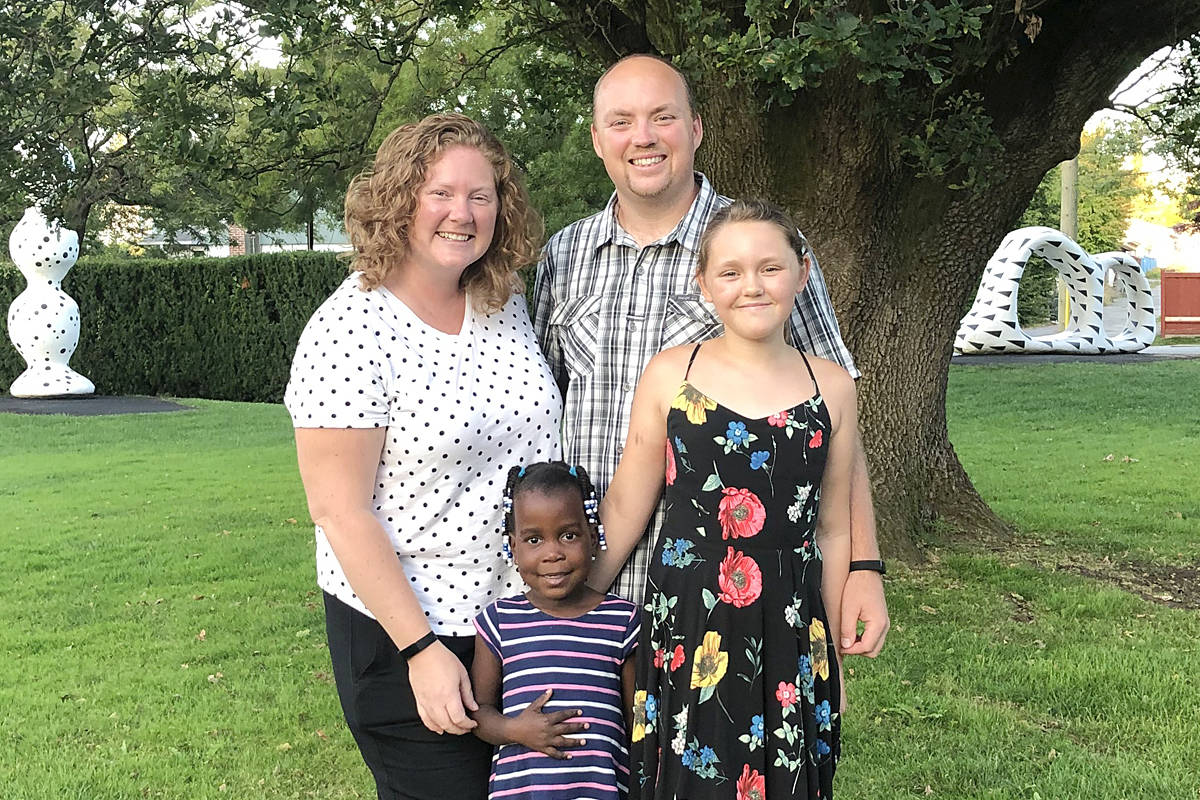 The Granger family, mom Coreen, dad Jeremy, big sister Serenity and little sister Lovemika, had trouble finding a place to rent while Justice recovered from a bone marrow transplant at BC Children’s Hospital in Vancouver, in part because landlords were unwilling to rent because Jeremy wasn’t working, having taken time off to be with his son. On Sunday, Sept. 6, the family became the fourth to benefit from the “Adeline Samborski 5K giveaway” fund launched by a Langley father and son. (Special to Langley Advance Times) 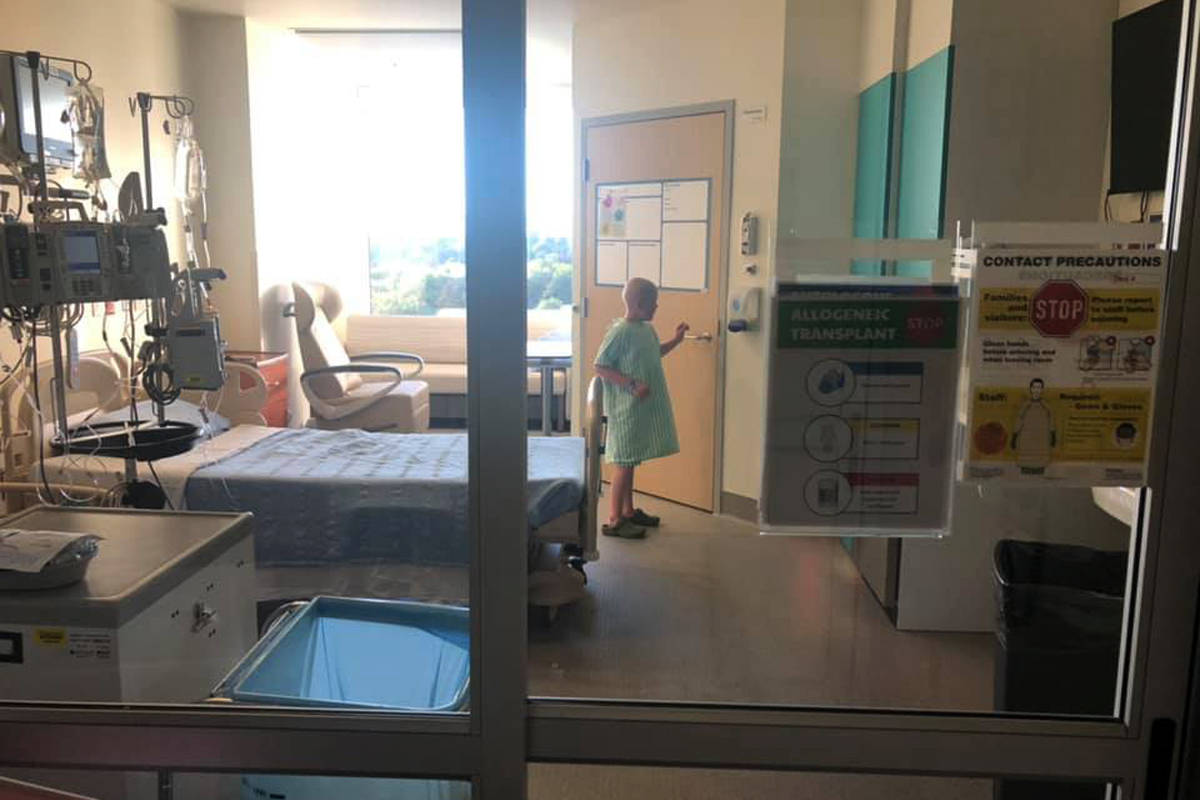 Justice Granger, 8, from 100 Mile House, is recovering from a bone marrow transplant at BC Children’s Hospital in Vancouver. His older sister Serenity was the donor. On Sunday, Sept. 6, the family became the fourth to benefit from the “Adeline Samborski 5k giveaway” fund launched by a Langley father and son. (Special to Langley Advance Times)

Canadians maintain strong trust in doctors and scientists during pandemic