Malia Radmore is back to her normal “don’t-touch-me, sassy,” self, according to her Mom, Melissa, who admits the feisty two-and-a-half year-old Willoughby girl is getting a little more slack than usual.

After spending several days struggling with paralysis brought on by a bite from a wood tick, it’s wonderful seeing Malia back to her normal self, Melissa shared.

Last Wednesday, May 20, when Malia started crawling instead of walking, Melissa at first thought her youngest daughter was just fooling around, or a maybe a little worn out from all her running around the day before.

“We thought she was playing,” Melissa told the Langley Advance Times.

But when she tried to stand up, Malia collapsed.

“It was so terrifying.”

She was told by the nurse on the other end of the line to hang up, immediately, and call 911.

“It was really scary,” Melissa related.

Her frustration rose when ambulance paramedics arrived and suggested she drive her daughter to hospital herself.

Melissa, who could see Malia’s condition was worsening, insisted, and now says she hopes the paramedics will read this story and realize how serious the situation was.

In hospital, doctors and medical techs ran tests to try to determine the cause of the paralysis, as Malia’s condition declined.

Her paralysis spread from her legs to her arms, and to her head, preventing her from swallowing.

She had trouble moving her eyes.

“I thought she was going to spend the rest of her life in a wheelchair,” Michele remembered.

But then, as Melissa was holding her daughter, and stroking her hair, she spotted the tick.

It was a Rocky Mountain wood tick, swollen from feeding for several days.

Doctors told the family this type of tick bite is so rare it is only every reported once a year in all of B.C.

After they removed it, there was a frightening period where Malia continued to deteriorate.

But in less than a day, she started to recover.

By the time her family brought her home, Malia was her former energetic self.

“The first thing she did when she got home, she ran to the door and said, ‘trampoline,’” Melissa recalled.

Malia got to celebrate her homecoming with her favourite treat, a Dairy Queen ice cream cake, with a few more hearts on it than usual.

According to HealthLink BC, tick paralysis can be caused by several different types of ticks in North America, the result of venom secreted from a female tick during feeding.

Symptoms usually start four to seven days after a tick attaches to a victim and can include tingling, numbness, or loss of feeling or movement that starts in the hands or feet, trouble swallowing or talking and double vision.

Melissa, who has had a crash course on the hazards posed by ticks, is speaking out to alert other parents to the potential hazards.

“If you’re out camping , check twice a day, ” she advised.

“Check their hair, between their toes, their armpits.”

She thinks Malia may have been bitten during a family outing to Williams park in Langley. 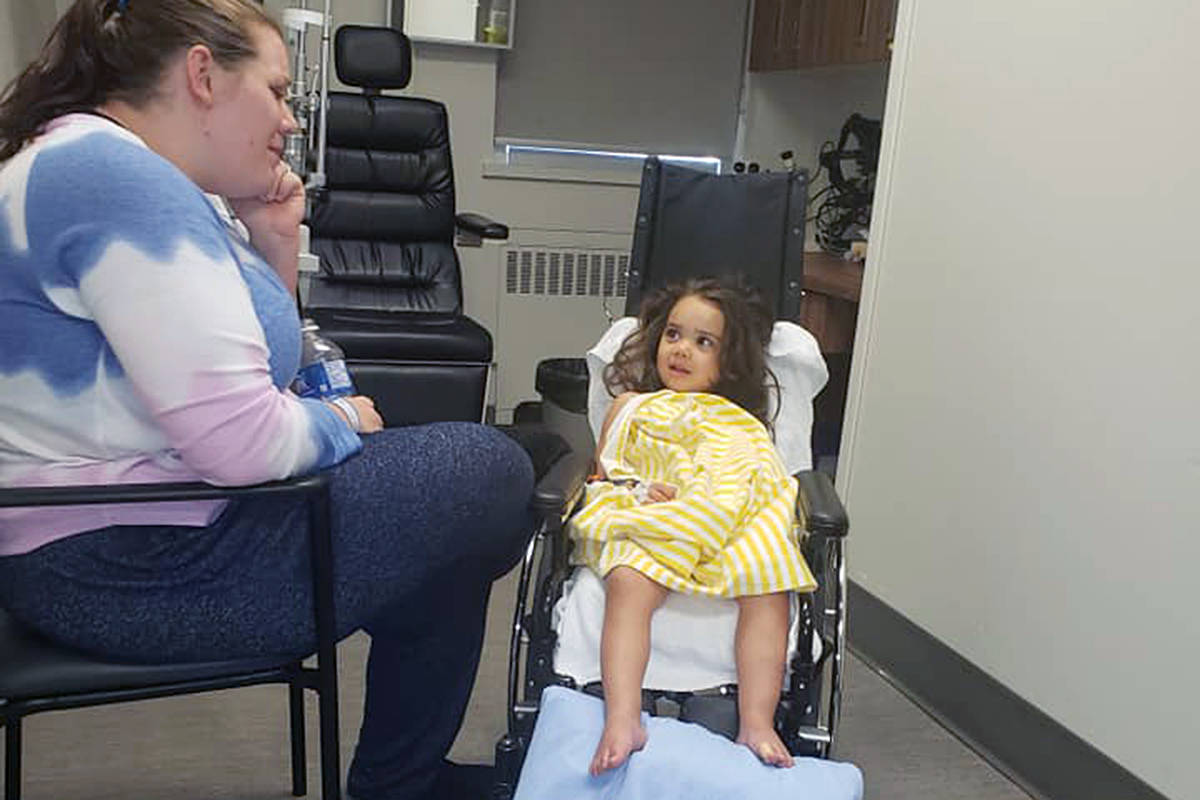 Melissa Radmore and Malia, at an eye exam after she was diagnosed (Courtesy Radmore family)