The hearing did not go ahead as scheduled. Lawyers met briefly in court Thursday and adjourned the matter to a teleconference at 1:45 p.m. Friday. This will likely be a procedural matter, with the hearing delayed to a future date.

The man convicted of stabbing an Abbotsford teen to death at her high school in 2016 is due back in court this morning (Sept. 24) for a hearing to argue that he is not criminally responsible (NCR) for the act.

Gabriel Klein, who was convicted in March of the second-degree murder of 13-year-old Letisha Reimer, is slated to appear at B.C. Supreme Court in New Westminster starting at 10 a.m.

Klein was also found guilty in March of the aggravated assault of Reimer’s 14-year-old friend (whose name is protected by a publication ban). The pair, whom Klein did not know, were attacked in the foyer of Abbotsford Senior Secondary on Nov. 1, 2016.

His sentencing hearing was originally scheduled to take place Sept. 23 and 24 at B.C. Supreme Court in New Westminster, but Reimer’s family was told last week that the matter had been changed to an NCR hearing on Sept. 24.

During Klein’s trial, which began last October, defence lawyer Martin Peters had argued that Klein was suffering from a mental illness at the time of the attack and should be found guilty of manslaughter.

But Justice Heather Holmes said that there was no evidence to show that he was suffering from a mental disturbance when he stabbed the two girls, and she convicted him of murder.

There were numerous delays in bringing the matter to trial after Klein was initially found in April 2018 that he was unfit to stand trial.

During hearings leading up to that decision, the court heard that Klein had been diagnosed with schizophrenia, was “intensely paranoid,” hearing voices on a daily basis, suffering from “disorganized thinking” and experiencing hallucinations.

The BC Review Board then held hearings in July and September 2018 to review the matter and determined that Klein was still not fit for trial.

But at a hearing in January 2019, the review board was told that Klein was no longer hearing voices and was able to focus better since starting a new medication regimen.

The BC Review Board then determined that Klein was fit to stand trial.

His lawyers initially indicated that they would use an NCR defence during the trial, but Peters announced in December that he was not calling any evidence on Klein’s behalf, and he did not use the NCR defence in his closing arguments.

It’s not clear why an NCR hearing has now been scheduled.

An NCR ruling means that a judge believes an individual did not have the capacity to appreciate his actions and know right from wrong at the time of their offence.

Individuals who receive such a ruling fall under the mandate of the BC Review Board, which conducts an assessment to determine whether the person should be detained in a hospital, discharged in the community under certain conditions or discharged without conditions. 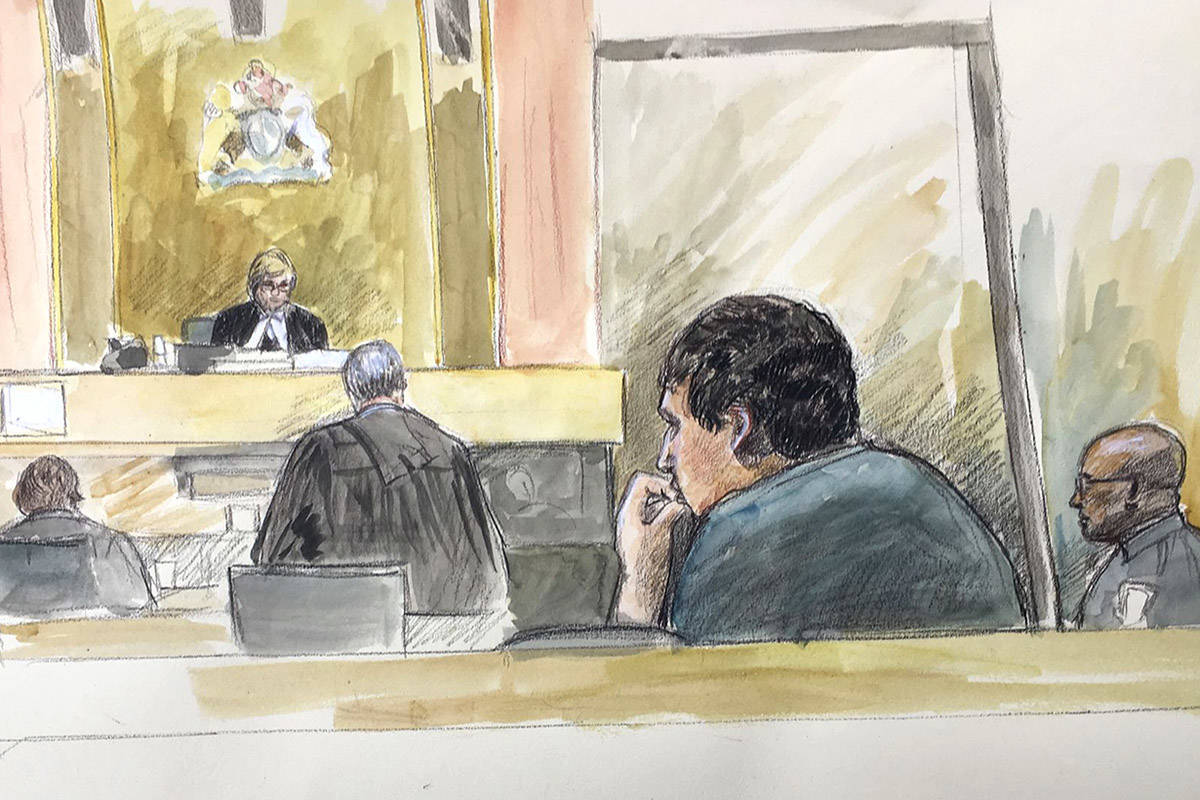 An artist’s sketch depicts Gabriel Klein in court during his fitness hearing on April 19, 2018 at B.C. Supreme Court in New Westminster. (Sketch by Sheila Allan)