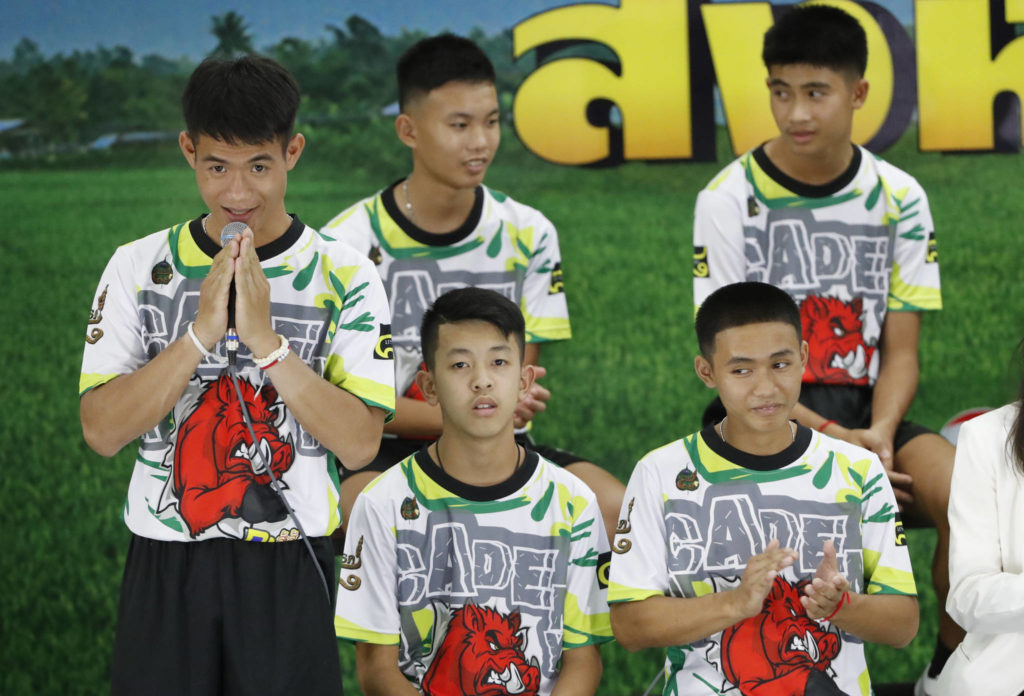 Coach Ekkapol Janthawong, left, and members of the rescued soccer team express their thanks during a press conference discussing their experience of being trapped in a flooded cave, in Chiang Rai, northern Thailand, Wednesday, July 18, 2018. The 12 boys and their soccer coach rescued after being trapped in a flooded cave in northern Thailand are recovering well and are eager to eat their favorite comfort foods after their expected discharge from a hospital soon. (AP Photo/Vincent Thian)

The youth soccer teammates rescued from a flooded cave began their first day back home with their families Thursday by going to a Buddhist temple to pray for protection from misfortunes.

Eleven of the boys and the Wild Boars coach kneeled and pressed their hands in prayer to the tune of chanting monks at the ceremony meant to extend one’s life and protect it from dangers. They were joined by relatives and friends at the Wat Pra That Doi Wao temple, overlooking Myanmar on Thailand’s northern border.

Only one member was absent, Adul Sargon, who is not Buddhist.

The team has already said they would ordain as Buddhist novices to honour a former Thai navy SEAL diver who died in the cave while making preparations for their rescue.

On Wednesday evening, the boys and coach were released from hospital and spoke to the media for the first time since their ordeal, describing their surprise at seeing two British divers rising from muddy waters in the recesses of the cave. It would be another week before they were pulled out of the Tham Luang cave.

“We weren’t sure if it was for real,” 14-year-old Adul said. “So we stopped and listened. And it turned out to be true. I was shocked.”

In one poignant and emotional moment at the news conference, a portrait was displayed of Saman Gunan, the Thai diver who died. One of the boys, 11-year-old Chanin “Titan” Vibulrungruang, the youngest of the group, covered his eyes as if wiping away a tear.

“I feel sad. And another thing is I’m really impressed with Sgt. Sam for sacrificing his life to let all 13 Wild Boars to be able to live our lives outside happily and normally,” said Coach Ekapol “Ake” Chanthawong. “When we found out, everyone was sad. Extremely sad, like we were the cause of this, for making the sergeant’s family sad and having to face problems.”

The Wild Boars had entered the cave on June 23 for what was to be a relaxing excursion after soccer practice. But rain began, and water soon filled the cavern, cutting off their escape, and they huddled on a patch of dry ground deep inside the cave.

Ekapol said the trip was meant to last one hour, simply because “each of us wanted to see what was inside.”

When the hour was up, they were pretty deep inside and already had swum through some flooded areas in the spirit of adventure. But in turning back, he discovered the way was not at all clear, and he swam ahead to scout the route, attaching a rope to himself so the boys could pull him back if necessary.

He said he had to be pulled out.

Ekapol said he told the boys: “We cannot go out this way. We have to find another way.”

The boys told reporters of their reactions at that point.

“I felt scared. I was afraid I wouldn’t get to go home and my mom would scold me,” said Mongkol Boonpiam, 13, prompting laughter.

Ekarat Wongsukchan, 14, said they decided “to calm ourselves first, to try to fix the problem and find a way out. Be calm and not shocked.”

The group had taken no food with them and survived by drinking water that dripped from the cave walls, Ekapol said, adding that all the boys knew how to swim, which had been a concern for rescuers.

Titan said he tried hard not to think about food. “When I’m starving, I don’t think of food otherwise it’d make me more hungry.”

Adul said they were digging around the spot when they heard the voices and Ekapol called for silence.

He recounted how Ekapol told them to “‘quickly get down there, that’s the sound of a person, or else they’re going to pass on by,’ something like that.”

But he said his teammate holding the flashlight was scared, so Adul told him “If you’re not going to go, then I’ll go.”

“So I quickly took the flashlight, and quickly went down, and I greeted them, ‘hello,’” Adul added.

Psychologists had vetted the journalists’ questions in advance to avoid bringing up any aspects of the rescue that might disturb them. The dangers of the complicated operation, in which the boys were extracted in three separate missions with diving equipment and pulleys through the tight passageways, were not discussed.

Doctors said the 13 were physically and mentally healthy. Although they lost an average of 4 kilograms (9 pounds) during the more than two weeks they were trapped in the cave, they have since gained about 3 kilograms (6 1/2 pounds) on average since their rescue. They were treated for minor infections.

Asked what he had learned from their experience, 13-year-old Mongkol Boonpiam said he felt stronger. “I have more patience, endurance, tolerance,” he said.

Adul said it had taught him “not to live life carelessly.”

While many of the boys wanted to be pro soccer players when they grow up, at least four of them said they hope to become navy SEALs, so they could help others.

All expressed their apologies to their families.

“I wanted to apologize to my parents. I know that I will get yelled at by mom when I get home,” said Pornchai Kamluang, 16.

Ekarat said sheepishly he wanted to apologize to his parents because while he told them he was going to a cave, he told them the wrong one.

“I told them I was going to Tham Khun Nam,” he said. “I didn’t tell them I went to Tham Luang. So I was wondering how they found us at the right cave.”

This story has been corrected to show the quote about the diver who died was from the team coach, not one of the boys.

One dead after fatal motorcycle crash on BC’s Highway 11 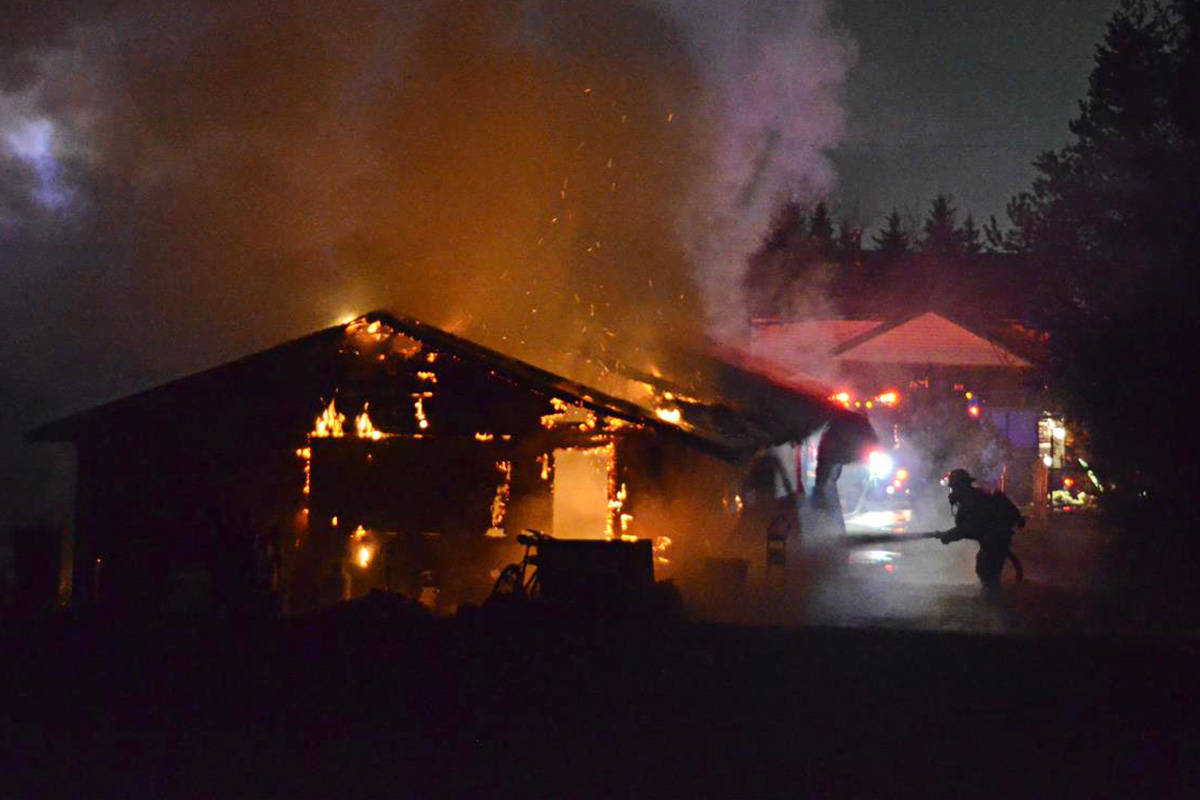 An early morning blaze struck a house in Willoughby 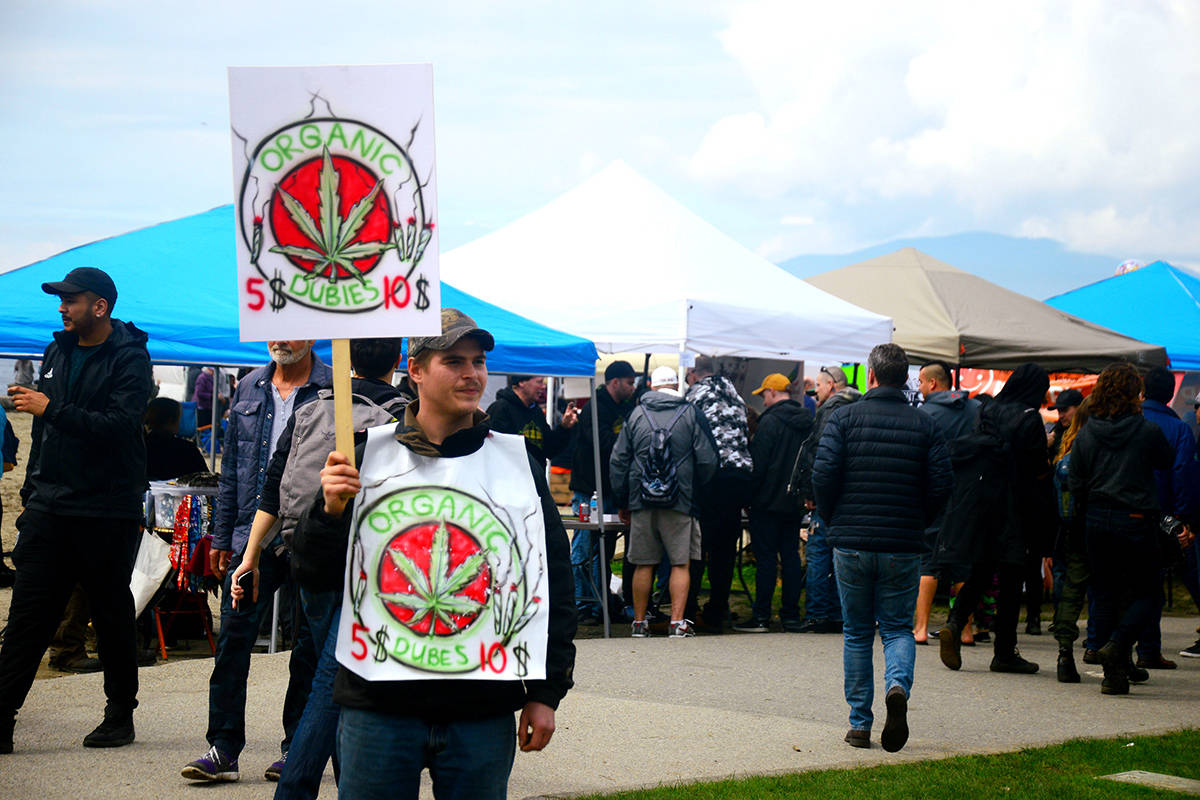 The 2020 event is billed as a ‘protest and farmers market’ 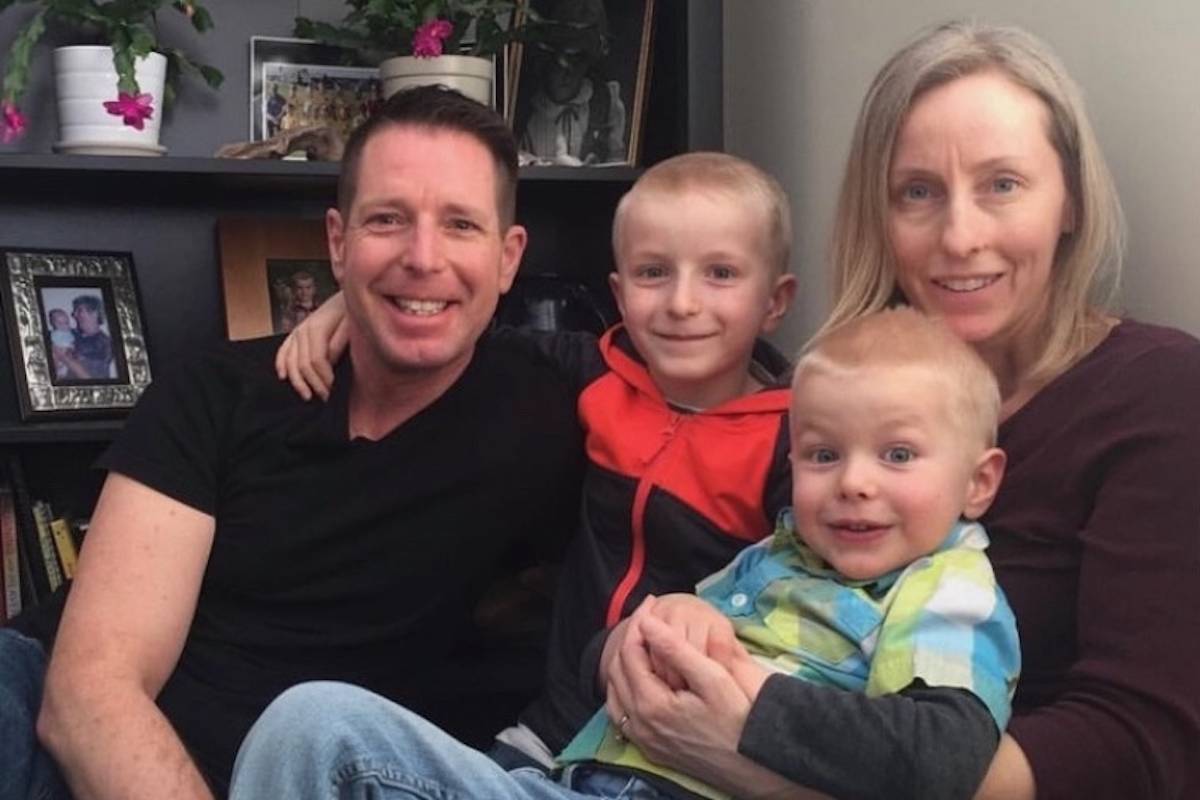 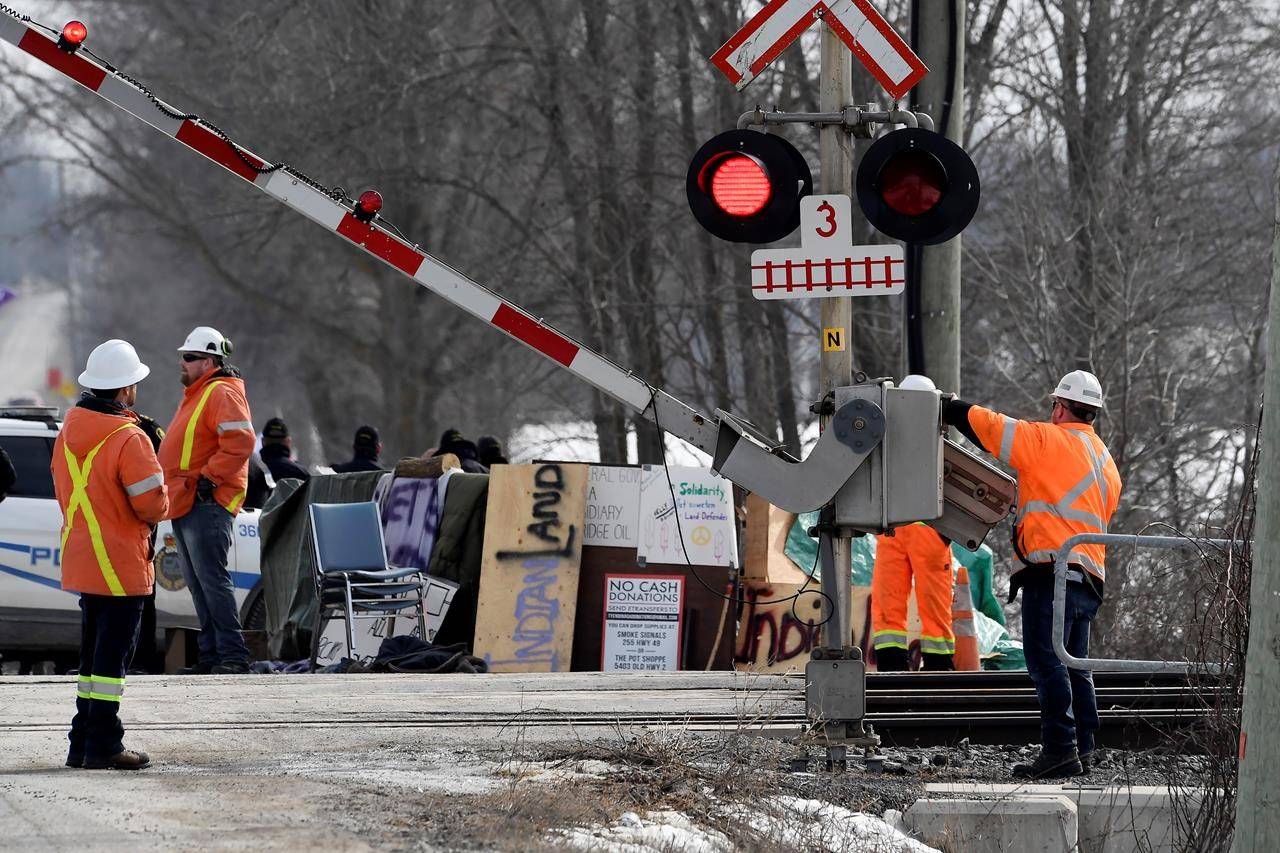 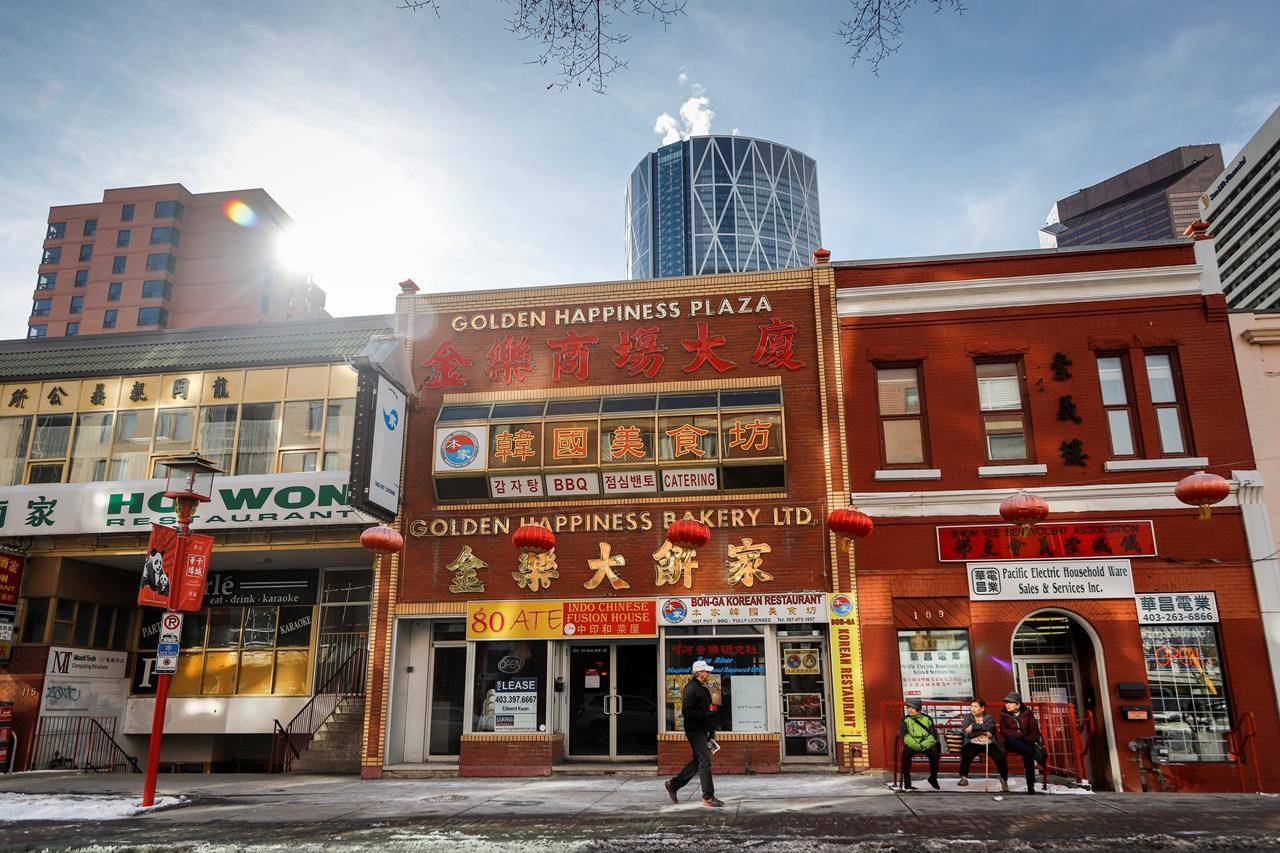 Around the world, about 81,000 people have become ill with the virus