A provincial policy meant to protect farming in B.C. could have a “detrimental impact” to the economy, according to the Township of Langley.

In a January memo to council, Val Gafka, the Township’s senior manager of corporate administration, outlines how the Agricultural Land Commission’s Policy L-22 is causing a significant roadblock for the film industry.

The regulation, which was put in place in October of 2016, classifies filming as an event, meaning temporary shoots can only take place 10 non-sequential days per year.

Crews now have to complete all their filming activities in just one day — something extremely impractical, Gafka said.

“It would be very rare … that a TV [show] could come in and start in the morning and end in the evening,” she said.

“They usually need a little bit of prep time to set stuff up, and then they film, and then they wrap up. So logistically, a 24-hour time frame would be challenging no matter the circumstance.”

While this policy affects all of B.C., the Township, in particular, is being hit hard as 75 per cent of the muncipality lies in the ALR, and it has a growing film industry.

In 2017 alone there were 151 productions filmed in the municipality, and between 2015 and 2016 there were 99 occasions when more than 10 days of filming were done on properties in the ALR.

Under the new policy, if that were to occur again, an additional 99 reports would have to be sent to council and the ALC for approval before filming could proceed — a process which can take up to nine months.

But with most film productions needing location approvals in days, Gafka predicts this “would ultimately curtail if not entirely cease filming on ALR properties within the Township.”

“Something drastically would need to change or else it could have a detrimental impact to the local economy, to not only the Township, but others,” Gafka said.

Township council forwarded one such application to the ALC in September. The MacInnes family applied for non-farm use status to allow filming of the TV show When Calls the Heart to continue. The Hallmark show has a temporary film set on their property in northeast Langley, and currently films there five months of the year.

In light of these issues, Creative BC, the acting body for B.C.’s film industry, is now in negotiations with the ALC and other stakeholders to make changes.

“The intent of Policy L-22 was broad and addressed a suite of events, and the impact on farmland within the ALR such as weddings and music festivals. However, temporary filming is very different from these events and therefore (the) policy is being discussed in collaboration among all parties with regards to the motion picture industry,” Creative BC said in a statement to the Langley Times.

“Creative BC works with government, industry and communities to develop mutually beneficial film policy. The fact is that B.C.’s film industry is growing and we are collaborating to develop distinctive film policies with our provincial and municipal partners — whether relevant to agriculture or transportation or parks — this is a natural progression in the evolution of a sustainable and successful film industry in B.C.”

Creative BC wrote a letter to the ALC in July, asking it to temporarily suspend enforcement of the policy until both parties could meet, and the industry could be educated on the regulations. At this time, Township staff were also seeing “an unprecedented level” of policy enforcement by the ALC, when traditionally there was little to none, Gafka said.

In response, the ALC said it is open to collaborating on a review, and that it will suspend enforcement until May 31, 2018.

This suspension does not include any properties with permanent or semi-permanent film sets.

“Though the gathering for an event regulation was not adopted with the film industry in mind, it seemed sufficiently general to encompass most temporary location filming events,” said ALC chair Frank Leonard in a letter to Creative BC.

“During this review period, the ALC will work with government and stakeholders to determine if temporary location filming events should be considered a permitted non-farm use in the ALR (as per regulation), and if so, what appropriate conditions, thresholds, or other requirements should be adopted.”

A meeting between the ALC, Creative BC, Ministry of Agriculture, Ministry of Jobs, Tourism and Skills Training and the Township was held in September to discuss the review.

The Township has heard nothing from the ALC since, Gafka said.

Filming in the ALR by Miranda Gathercole on Scribd 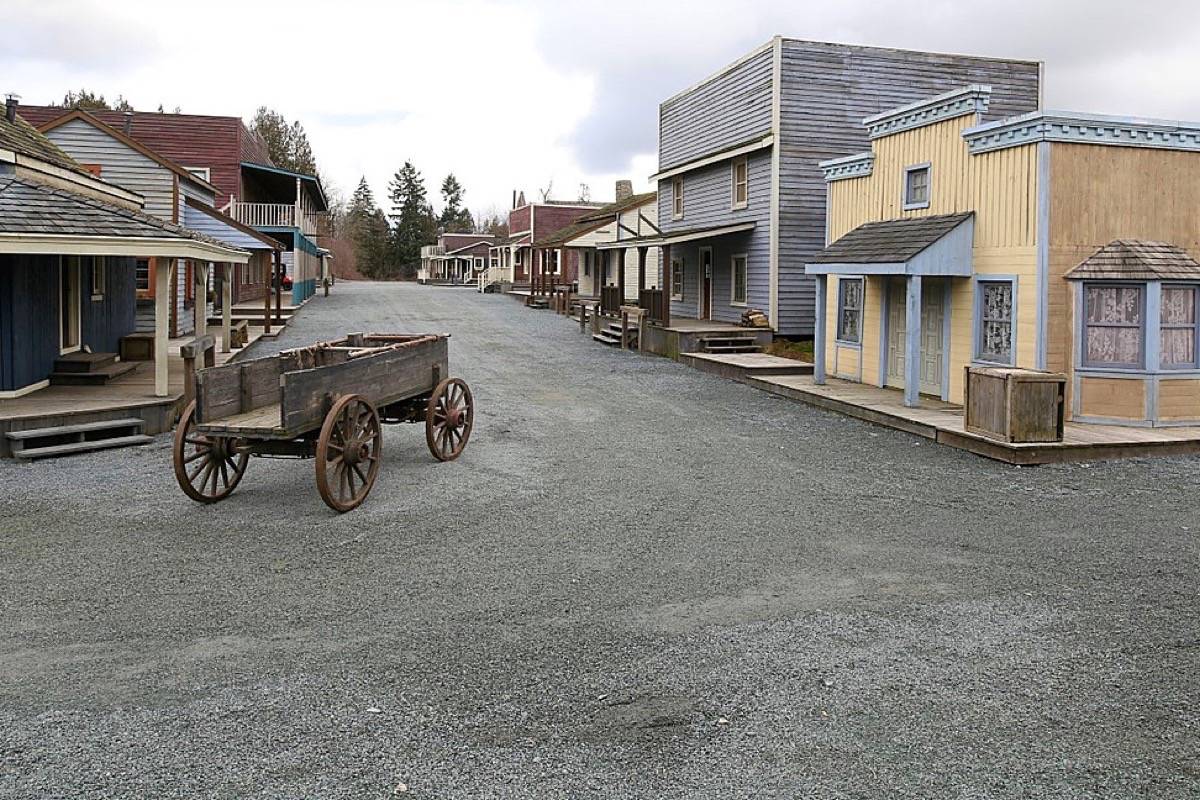 The MacInnes farm in northeast Langley houses the temporary film set for TV show ‘When Calls the Heart.’ The property is located in the ALR and is subject to Policy L-22, which limits filming activities to 10 non-sequential days per year. Photo via www.macinnes-farm.com