For a child battling terminal brain cancer, the milestone of her sixth birthday Saturday was no small feat.

Aldergrove’s Ariel Seydel started her latest round of chemotherapy at BC Children’s Hospital on Friday, the day before her birthday.

Her mother, Makaila, said the treatment – in order to limit the growth of the tumor in her brain – left her with a high fever, frequent vomiting, migraines, and dizziness.

“Thankfully, she was in good, energetic spirits for her birthday” the very next day, Makaila said.

Little did either of them know just how big of a surprise the family’s growing support network in Aldergrove planned for the brave little girl.

Just after 2 p.m., a birthday parade complete with a fire engine, 10 big rigs, an RCMP car, and other vehicles, drove by the front of Ariel’s home.

There was even a socially-distant parade on foot with guests including a dancing dinosaur, two Disney princesses, and her good friend, Santa Claus.

RELATED: ‘Superhero’ five-year-old from Aldergrove combats fifth round of chemo this Christmas

Prior to the first COVID-19 outbreak in B.C., Ariel and her parents had planned a Candyland-themed birthday party with all of her friends from school.

But provincial physical-distancing regulations put a damper on in-person events, and the Seydels couldn’t take any risks with Ariel’s immunity being compromised.

“They pulled off the biggest and greatest birthday parade for her.” Ariel had such a good time that the six-year-old kept whispering to her mom that Saturday was “the best day ever.”

Ariel had such a good time that the six-year-old kept whispering to her mom that Saturday was “the best day ever.”

She was so excited that parents Makaila and Shea had to remind her to keep her distance from all of the people she knew and loved in their cars – especially those from school.

“Thank you so much for making my child smile,” Mom said later.

RELATED: A heart-warming outpouring of support for Aldergrove family dealing with juvenile cancer

By the end of the procession, Ariel had a pile of gifts that had been handed to her mom through car windows.

She had seen Frozen princesses Elsa and Anna make snow in front of her, and played with her new bubble machines.

The parade was a welcome distraction from the chemotherapy the six-year-old will have to endure every Monday, Wednesday, and Friday until May 29.

As a result of her cancer, craniopharyngioma, Ariel can only see out of her right eye.

It’s been a steady decline in vision for the child, since February 2018, when doctors first told her family the news.

Makaila and Shea made the decision to relocate from Vancouver Island to Aldergrove to be closer to BC Children’s Hospital for Ariel’s treatment.

Those wanting to support the family can do so at gofundme.com. 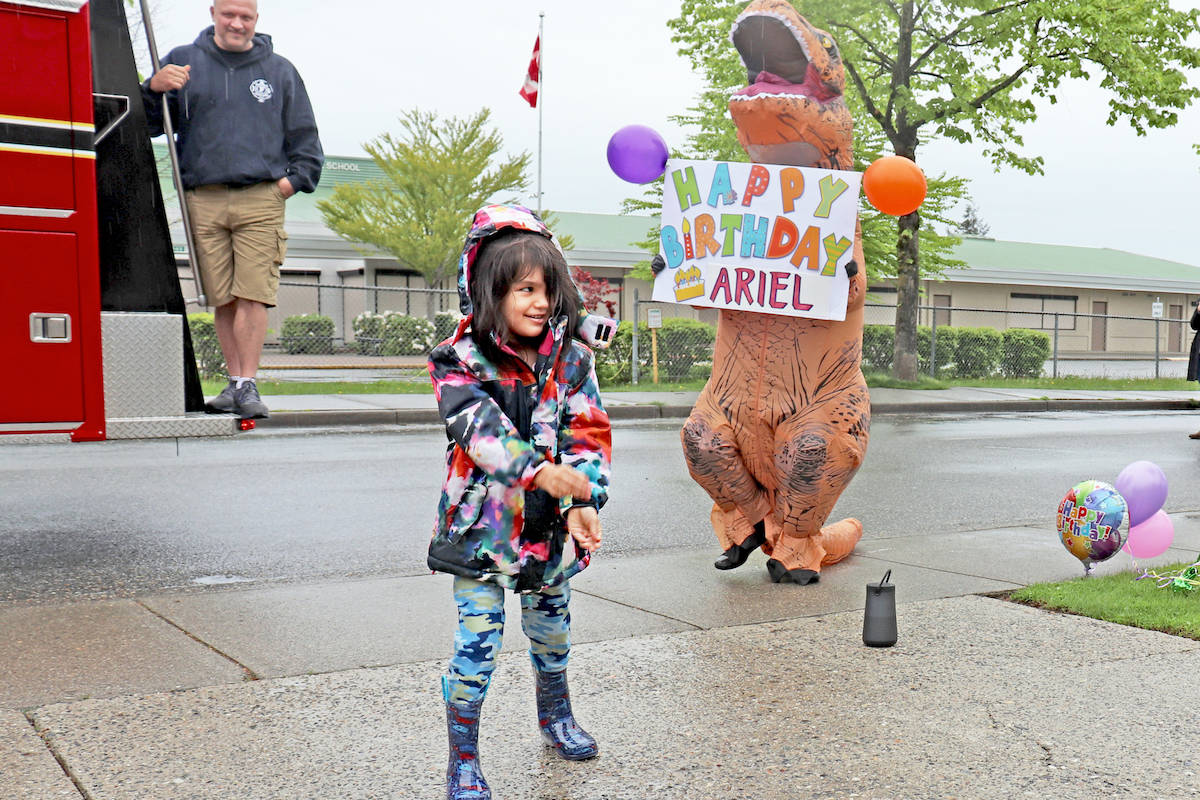 Aldergrove resident Ariel Seydel, who is battling brain cancer, danced to Baby Shark on her sixth birthday, Saturday, during a surprise visit from an anonymous dancing dinosaur. (Sarah Grochowski photo)

B.C. hasn’t yet found any contact-tracing apps worth considering: doctor