Aldergrove is about an hour’s drive from the ocean, but since the Second World War, a need for reliable communications with ships at sea has meant it is home to a Royal Canadian Navy base.

Naval Radio Section Aldergrove is still the home base for about 14 maintenance personnel, who keep the sensitive receiving equipment up and running. A second, related base, in Matsqui near Sumas Mountain, has the transmitting station.

“Not much has changed since World War II,” said Chief Petty Officer Chance Sheffield, who heads up the Navy crew of technicians in Aldergrove.

Early in the war, naval radio communications was run from Vancouver Island, near the major base and docks at Esquimalt.

But interference from the base was a serious problem for the high and low frequency signals that are used for long-distance radio communications.

In 1942, a decision was made to build new stations, far inland in what was then quiet, very rural farm country. Aldergrove and Matsqui became the sites of the new stations.

Today, they still fulfill this function for Navy and Royal Canadian Air Force serving on the Pacific Coast and out at sea.

Even now, buildings can still be an issue for the transmitting and receiving equipment.

“That’s the reason why we have so much land,” said Sheffield.

The Aldergrove site covers about 1,000 acres, sprawling north from downtown Aldergrove up north to 48th Avenue, and across 264th Street covering some land along Robertson Crescent.

The Matsqui site is about 600 acres.

What has changed is the number of people needed to service the facility.

For many years, the base was a bustling community within the community, with up to 200 people living there in cottages and townhouses, including PMQs, or personal married quarters.

The number of people working on the base was reduced over the years as technology improved, and now the actual communications is carried out by Canadian Navy personnel located on Vancouver Island. The on-base housing was officially closed down in the 1990s. The last of the housing and many other buildings, including a water tower, were torn down over the following years.

Now the base is still busy, with crews who have taken on an interesting role farther inland than many Navy service personnel usually work.

“We grew up on the fleet,” said Sheffield. “A lot of sailings, a lot of deployments.”

That means that everyone working at Naval Radio Station Aldergrove is aware of the importance of keeping communications going. If there are issues with satellite links, the long-range radio provided by Aldergrove and Matsqui remain vital.

There are some differences from traditional navy duty.

“It is a little different being in a navy facility that is, for all intents and purposes, landlocked,” he said.

Their concerns include things like bears and beavers – making sure bears haven’t broken through fences around equipment, for example, and trying to protect habitat while preventing beavers from flooding parts of the base with dams.

The big open spaces also mean the base personnel work with conservationists and university researchers. There are more than 10 endangered species found on the Aldergrove site, including the Oregon spotted frog and the Salish sucker. The week before Remembrance Day, a monitoring program for the Salish sucker was taking place on the Aldergrove site.

Sheffield has seen pictures of the base from the days when it had housing, and he says it would have been nice to have on-base housing, but it’s also nice to see the locations that used to have buildings go back to nature. 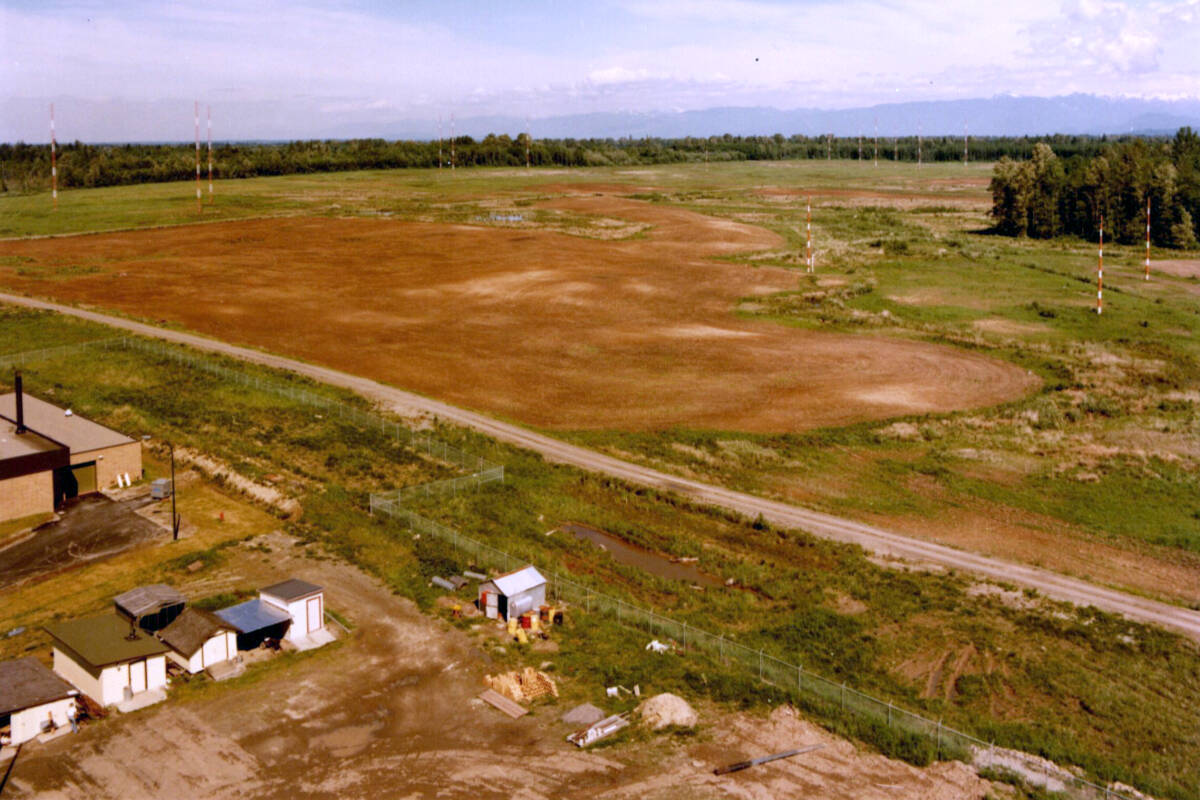 An aerial view of the antenna field at the Aldergrove Naval Radio Station in 1977. (Alder Grove Heritage Society) 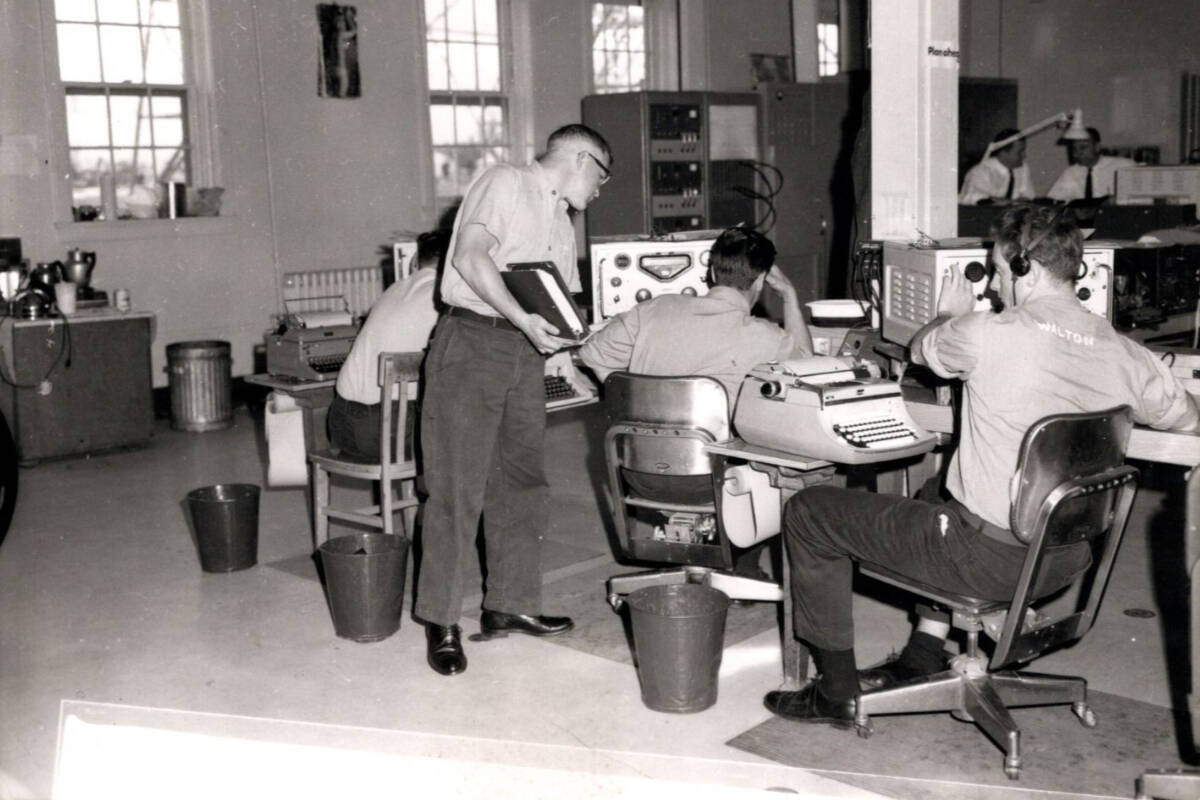 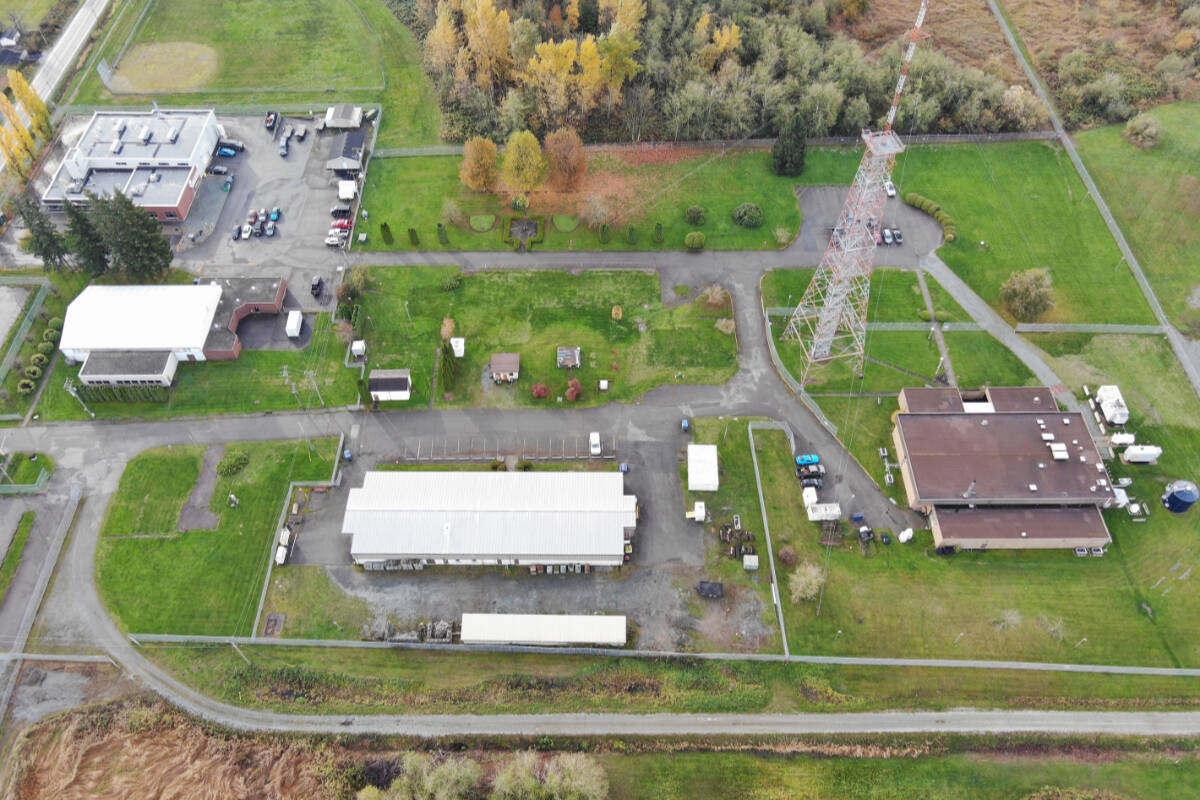