Aldergrove will not be forgotten by the new Langley Township council, vows new mayor Eric Woodward.

Woodward, whose Contract with Langley campaign platform included a number of specific promises to Aldergrove residents called Vision For Progress, sat down with The Star last Friday to discuss plans for the area. Contract With Langley won six of the nine council seats in the October municipal election.

A series of notices of motion at the Nov. 14 council meeting indicated some of the directions the new council wishes to go. Woodward said more proposals will be outlined at the next two council meetings, on Dec. 5 and 12.

“The most ambitious proposals have not come forward yet,” he said.

The Aldergrove changes will roll out over the next few years, as some plans are impacted by various timetables.

For instance, the Aldergrove Gateway commercial complex – owned by the Township – has been almost totally removed and graded, but the Kentucky Fried Chicken outlet has a lease which runs until 2025. Until that time, the remainder of the land will likely be used for parking, as that is a major challenge in the area when the Otter Co-op outdoor pool is in full use during summer months.

Once the KFC outlet leaves, the full footprint of the property will be available for development. Woodward says expansion of the community centre is a top priority, but a plan for the whole site will be developed by the Township. Community consultation will help to shape what goes on the property, he insisted.

Woodward put forward a proposal for the former Alder Inn property at 272nd Street and Fraser Highway during the term of the last council, which he said the last council was not interested in.

The Aldergrove core plan calls for mixed use on the one-acre site, with buildings up to five storeys. This would allow for more housing in the downtown core.

Fraser Highway widening is complicated by the fact that the road is part of TransLink’s major road network.

Woodward just attended his first meeting of the Mayors’ Council, which oversees TransLink, last Thursday, and says he is still learning how things get done at TransLink.

“TransLink has a plan for widening Fraser Highway, but we would like to revisit that to see it happen faster,” said the new mayor.

Density is important for Aldergrove’s future, he added, but it has been a challenge to get there. The size of the community is restricted by both the Agricultural Land Reserve and a large federal national defence property just north of the urban core.

“We want more people in Aldergrove,” he said, noting that this encourages the development of businesses and community amenities, which Contract with Langley says is critical to building a more complete community.

Discussing density more holistically, Woodward questioned some of the pledges made by new Premier David Eby about increasing housing density so that it can become more affordable.

“His comments might sound good in Point Grey. But, out here, we would like to know what they are,” he said. (Eby’s housing policy was to be announced Nov. 21).

“I’d like to know what help there will be for municipalities. If there are to be more secondary suites, there will have to be changes to the community plan. The devil is in the details. We will watch closely.”

Woodward noted that Langley Township is one of the fastest-growing municipalities in B.C. and is not known for deliberately slowing down applications for development.

One of the notices of motion at the Nov. 14 council meeting, presented by Woodward, calls for a review of planning in the Salmon River Uplands area. The rural area has seen an uptick in development in recent years.

The notice of motion calls for a “review (of) the Salmon River Uplands area within the Township of Langley’s Rural Community Plan including, but not necessarily limited to, minimum parcel sizes, desired long-term character of the area and the establishment of an appropriate area-based Community Amenity Contribution policy framework for residential development.”

Woodward explained that some significant development is planned on two properties near 240th Street and 56th Avenue, and he believes that subdivision “must respect the character of the Salmon River area.”

The new council has also sent strong signals that Community Amenity Contributions (CACs), which are assessed upon subdivision, “must be appropriate to the needs of the area.” A notice of motion on an update to CAC policy was also presented at the Nov. 14 meeting.

“Our goal is to move on from the view of development under the previous administration, where there was minimal community benefit. A share of the benefits of development – the community needs to see some of that. We can’t put it all on property taxes. There has been development with not much return,” he noted.

Woodward said that some of the notices of motion were designed to send clear signals to developers of potential projects, where council has no interest in land use changes, such as some early discussions of a mixed-use development on a 93-acre parcel on Glover Road, within the Agricultural Land Reserve.

“Why waste everybody’s time [on such proposals]?” he asked.

He said his Contract with Langley team is asking “What kind of Township do we want to have?” 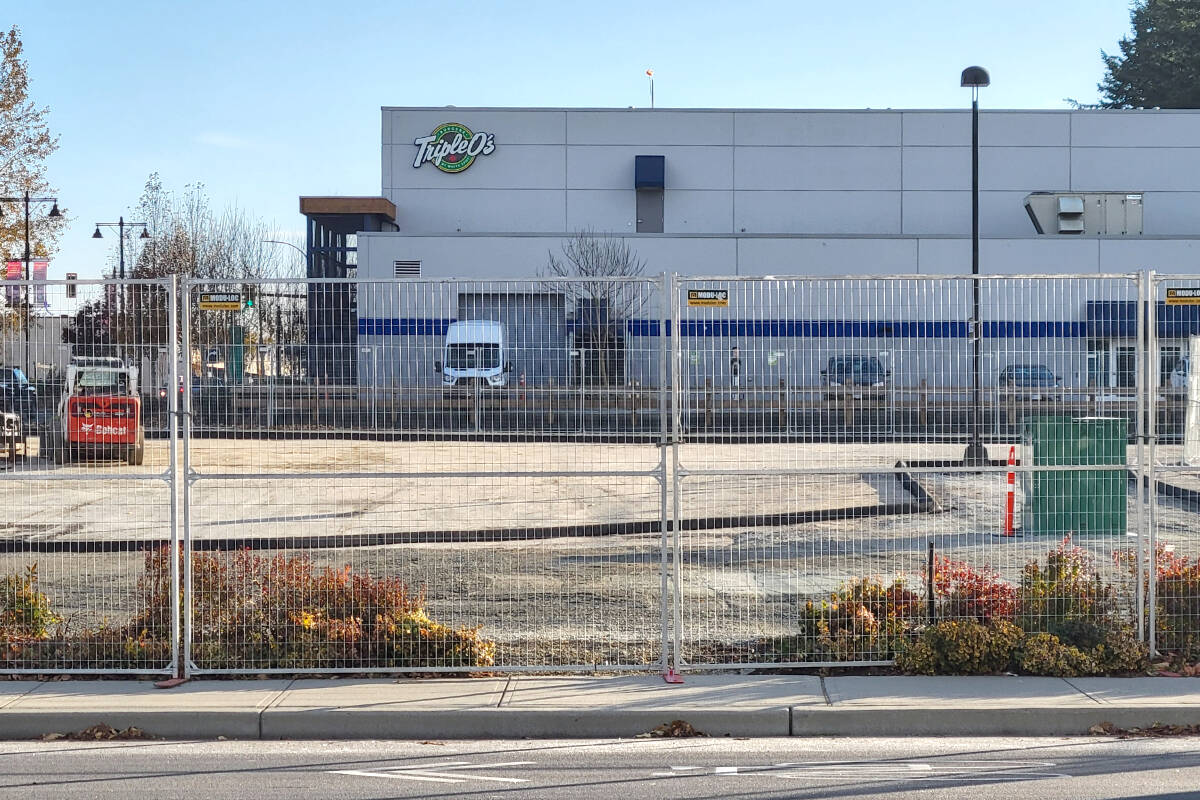 Construction workers finished levelling the Aldergrove Gateway property, after demolition of most of the buildings there. Langley Township owns the land and a full plan for the property will be put together in coming years. (Dan Ferguson/Black Press Media)

CRIMESTOPPERS: ‘Most wanted’ for the week of Nov. 27