The south section of Highway 13 is nearly complete, as all five lanes at Aldergrove-Lynden border crossing are now open to traffic. But there’s still work to be done.

It was in July 2018 that shovels first hit the ground for the $25.5-million widening project that saw Highway 13, from Zero Avenue to 8th Avenue, widened by Langley’s Tybo Contracting.

Since then, with the exception of winter, construction workers have crowded areas from Aldergrove leading up to the U.S. border.

Formerly, the Aldergrove-Lynden border crossing had only two lanes for through traffic.

Now, two lanes take motorists north and three south – including a commercial vehicle lane, one passenger vehicle lane and a lane for general traffic which will become a Nexus lane.

Achievement unlocked: The south section of the #BCHwy13 widening project is completed and all five lanes are open to traffic at the Aldergrove-Lynden border crossing. More info: https://t.co/DgcXAln5zH #Langley pic.twitter.com/X0K1jjaM9a

The BC Ministry of Infrastructure is in the process of collecting data on reduced congestion as a result of the five-lane completion in Dec. but “these are the early days,” it said, and additional lanes have only been in operation for over a month.

The upgrades are expected to provide safety and efficiency benefits to local traffic, international travellers, and commercial vehicles through easing traffic queues by providing more capacity at this busy border crossing, the ministry told the Aldergrove Star in a statement.

The Nexus and truck lanes alone are expected to absorb about 30 per cent of the total traffic at the crossing, the ministry said previously.

It added that the improvements will, in turn “help tourism and trade,” as well as save time for people who live and work in the region.

As of Friday at 1 p.m. there was no delay on wait times for everyday passengers at the crossing, according to the ministry’s online website.

What is still left to be done by the contractors, who are currently on a “temporary winter shutdown,” according to the ministry, includes 500 metres of the paving to 8th Avenue.

This includes the Highway 13 and 8th Avenue intersection and slope stabilization for the route.

Tybo Contracting is expected to start up work again sometime in March or April, depending on the weather.

The ministry anticipates final paving to occur by early spring 2020, at which time the section of road will open to four lanes.

Other newly completed parts of the project include a 3B Avenue east-west connection between Highway 13 and 264th Street, with a traffic signal at Highway 13.

There are also now wider paved shoulders for pedestrians and cyclists.

Less than half of the contract, $10 million, was paid for by the federal government.

The rest has been picked up by the province. 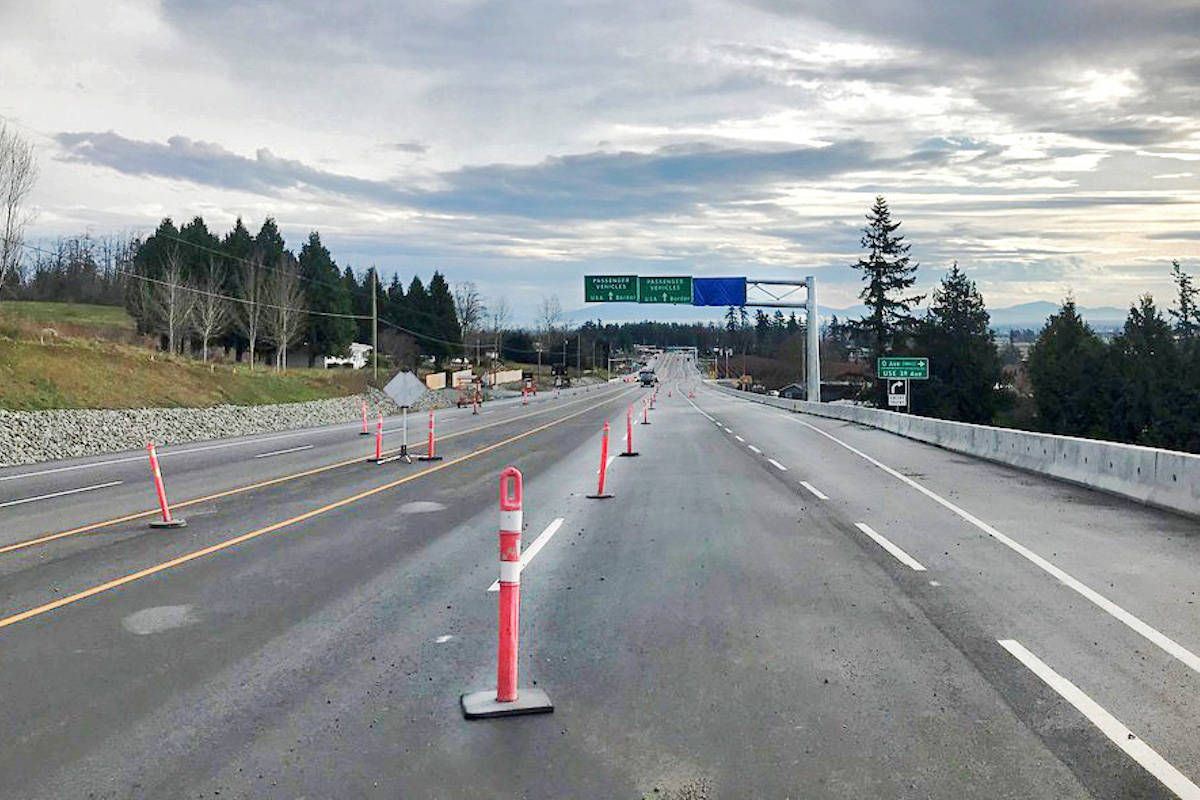 The completion of the Aldergrove-Lynden border crossing’s five-lane expansion will mean increased safety and decreased traffic jams along the south end of Highway 13, says the BC Ministry of Infrastructure. (Ministry of Transportation)