While the City of Surrey waits to hear if it will get a Great Wolf Lodge, the Township of Langley is busy building an outdoor water park in Aldergrove that could rival the popular American family adventure facility.

Township of Langley’s general manager of municipal administration Jason Winslade is managing the project and took The Times on a tour of the park while it is being constructed.

Graham Construction is building the massive project at 27032 Fraser Hwy. An average of 80 or more workers are on site on any given day, working to get the aquatic facilities open in time for the Canada Day long weekend.

“We continue to watch construction progress and over the next several months the ACUCC will really begin to take shape. We will have a lot to celebrate when it opens to the public on the Canada Day long weekend,” said Township Mayor Jack Froese. Grand opening is set for June 29.

And unlike the larger water parks, the cost to enjoy this outdoor water experience will be the same fee structure as any other Township recreation centre pass. That means it could be as low as $5.70 per adult and $2.80 per child to get into the park.

A lot of thought has gone into the water park and aquatic facilities to ensure people of all ages, especially hard-to-please preteens and teenagers, are kept entertained.

The water park will be open for the summer months with an opportunity to open for special holidays throughout the year like Family Day. The aquatic facilities like the competition pool will be open year-round.

Aldergrove Youth Will Have Something To Do Now

For decades, the Township has heard that there isn’t enough for youth to do in Aldergrove. And that was true until this summer, said Froese.

Not only will youth have affordable access to a huge water park, which includes a competition ready pool, but the recreation centre will have a full fitness centre for working out and a host of other programs. The $25 million facilities will bring a lot of options.

After climbing a tower, riders will have three slides to choose from, two of which will have one and two person tubes, one open and one enclosed with aqualucent lighting.

Around and underneath the slides will be a large current channel, which will gently propel people through the water where they can choose to go under a waterfall, sprayers and water buckets. Tubes will be stationed at the river. The channel can also be used in fitness and therapy programs such as water walking.

A giant hot tub is being built that can fit around 50 people. A sloping canopy will keep rain away.

Richmond-based company Whitewater will supply the water slides and is currently setting up the circus-themed aquaplay structure for younger children, which will feature a giant popcorn bucket on the top that will fill with water and cascade down a ramp and onto children’s heads. There are plenty of play features, including sprayers and buckets as well as three smaller water slides.

Behind the waterpark will be a building that houses change rooms on the main floor and a party room upstairs with a deck and view of the park.

There will be a separate water park for toddlers, featuring water bubblers and smaller sprayers.

The Township has acquired a neighbouring property, so they can include a grassed area with picnic tables. A 10-foot acoustic fence will be built around the park.

The wave pool will feature six types of waves and a large screen that will play all sorts of movies, and has a camera to feature live video.

The dry playground will be constructed using natural play pieces and will be even more elaborate than the popular playground at Willoughby Community Park, said Winslade.

A ramp leads swimmers into the leisure pool where aquasize classes and swimming lessons can take place. There will be a rope swing, basketball hoop and play features. The temperature of the leisure pool will be warmer than in traditional outdoor pools. The water depth slopes gradually from 0.7 m to 1.5m.

A new Aldergrove swim club is being proposed now that the community will have a covered 25-metre six-lane competition pool. But the Township has heard that other clubs will use the facility, too, including the Langley Olympians and water polo. The pool will also feature one- and three-metre diving boards. The shallow end is 1.5 m deep.

Visitors will access the pools through the community centre change rooms and walkways.

There is also access to a sauna and steam room from the outside.

The Township has sourced state-of-the art lifts that were used in the London Paralympics. Those lifts will available in the current channel and in the pools.

The 500-plus seat arena, with an NHL sized ice surface, is nearly done. The target date for opening is Saturday, Aug. 18. The second level of the arena will have a running track as well as a full fitness centre with exercise equipment and weights, fitness studio for yoga and a large multipurpose flex room that will allow for preschool programs, and other program space.

The Township salvaged the beams and bricks from the old Aldergrove elementary school that was on the site. They are incorporating those pieces into the new arena.

“When people sit on the benches to lace up their skates, they will be sitting on the beams that were milled from the Aldergrove school site,” said Winslade. The front entrance wall will be made of salvaged bricks.

The new arena will be home to the Kodiaks Junior B hockey team. And the Aldergrove Minor Hockey Association and Aldergrove Figure Skating Club will have offices on site.

“The Aldergrove arena opened in 1973 and is well liked by the community. It was really important for us to incorporate what they liked about that arena and bring it here, but with all the new technology,” said Winslade.

One thing you won’t see here is the mounds of snow piled up behind the arena.

The new facility has an ice melting pit beside the Zamboni room. There is wasted heat from the refrigeration plant that will be captured and used to melt the ice and transferred to heat the pools.

Recognizing that the new water park will draw thousands from all over Metro Vancouver and the Fraser Valley, the Township is currently working on ways to encourage those visitors stay and enjoy all downtown Aldergrove has to offer, said the mayor.

The Township is currently widening 270 Street, 30 Avenue and 270A Street and will put a traffic light in at Fraser and 270th.

The Township is also examining the idea of incentives to local businesses to allow visitors to park at their sites. The Township is putting in around 100 parking spots on site and adding additional road parking, but they are hoping many visitors will use off-site parking to explore the downtown core. An agreement exists with the high school to use its parking in the summer. The Township will also be putting in a new raised crosswalk east of the school at 29th and 270A. 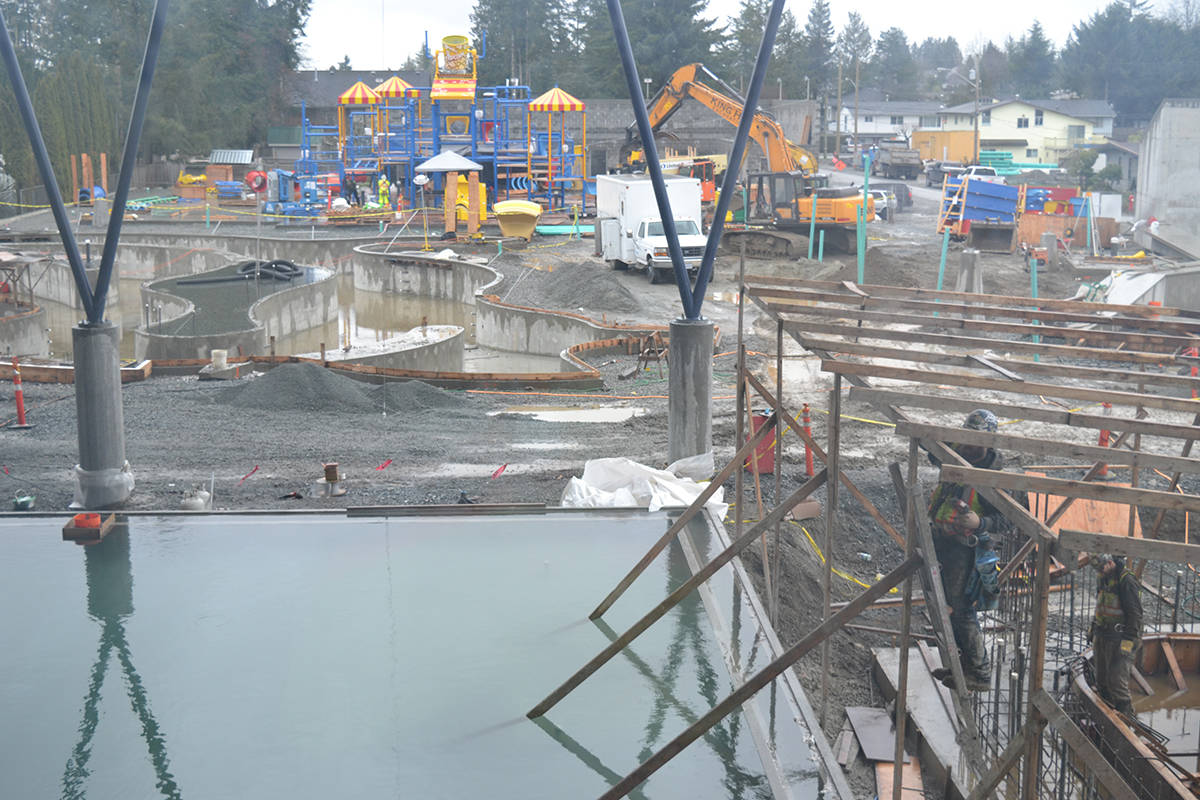 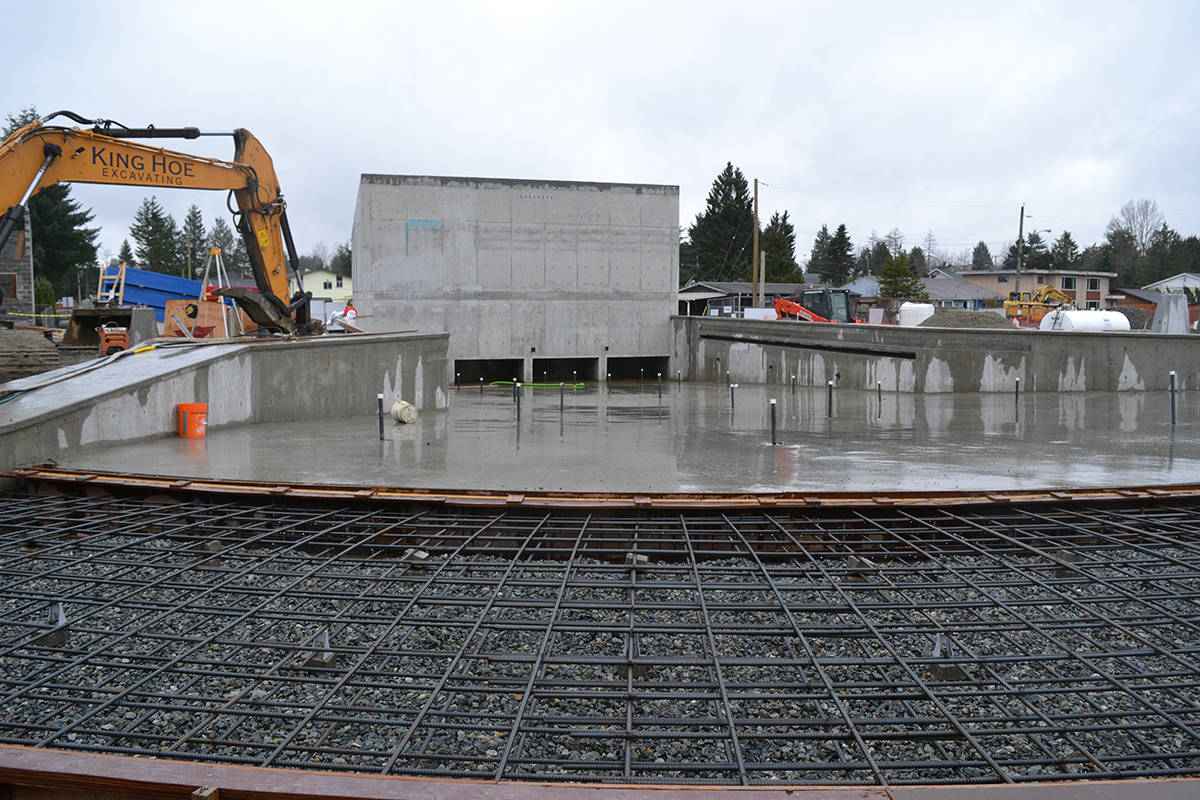 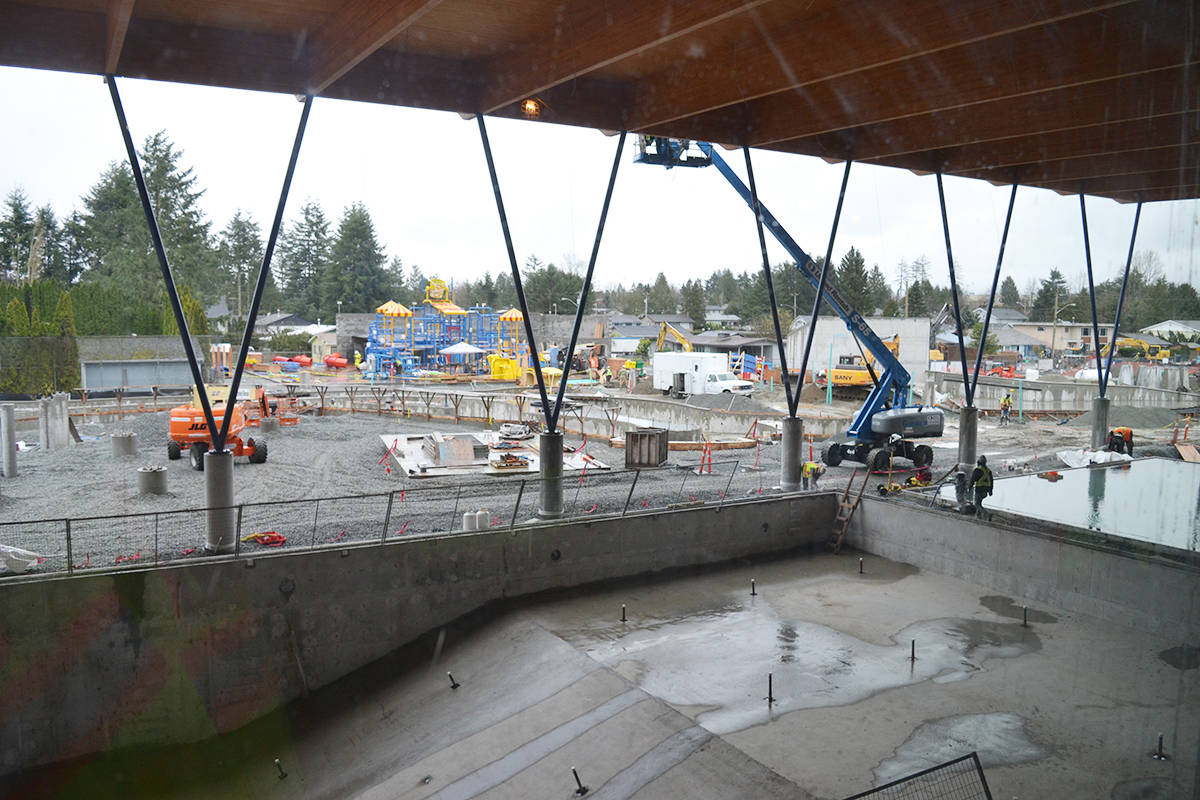 View of the covered 25-metre six lane competition pool, leisure pool and then onto where the waterslides will be, the lazy river and the waterpark in behind. Monique Tamminga Langley Times 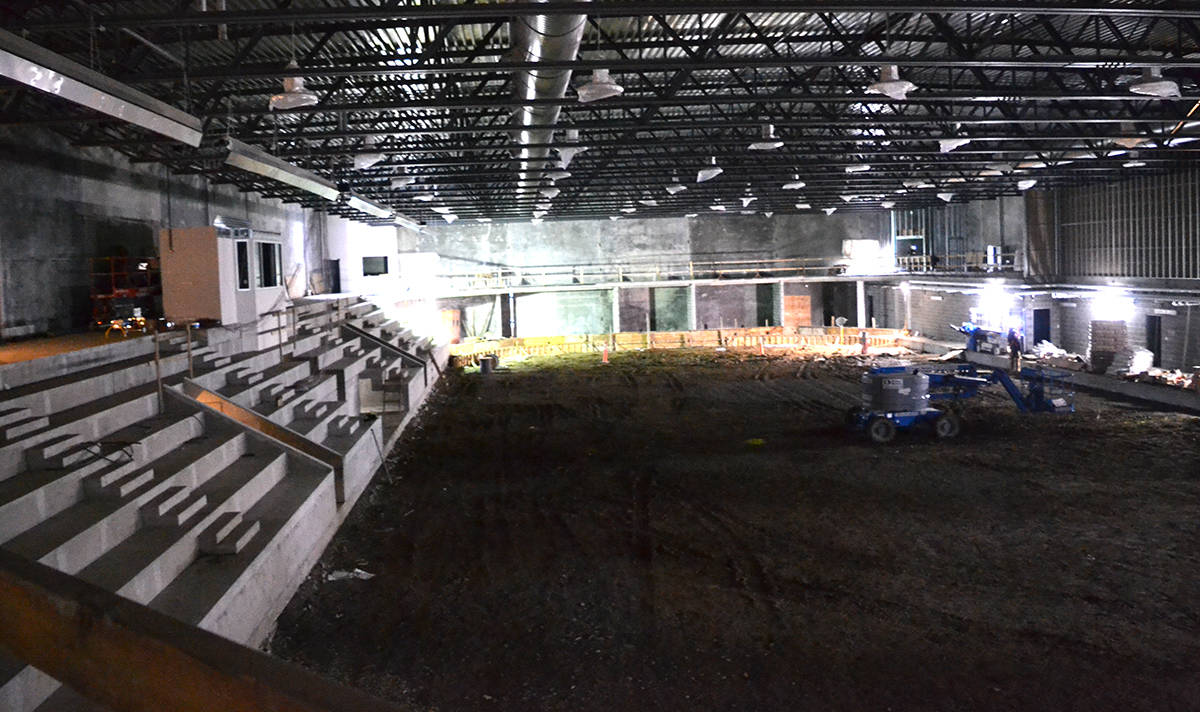 The new ice arena will feature NHL sized ice, 500 seating with one third being bench style, the rest folding seats. There will be numerous viewing areas, both heated and open air to the ice and the top will include a running track.